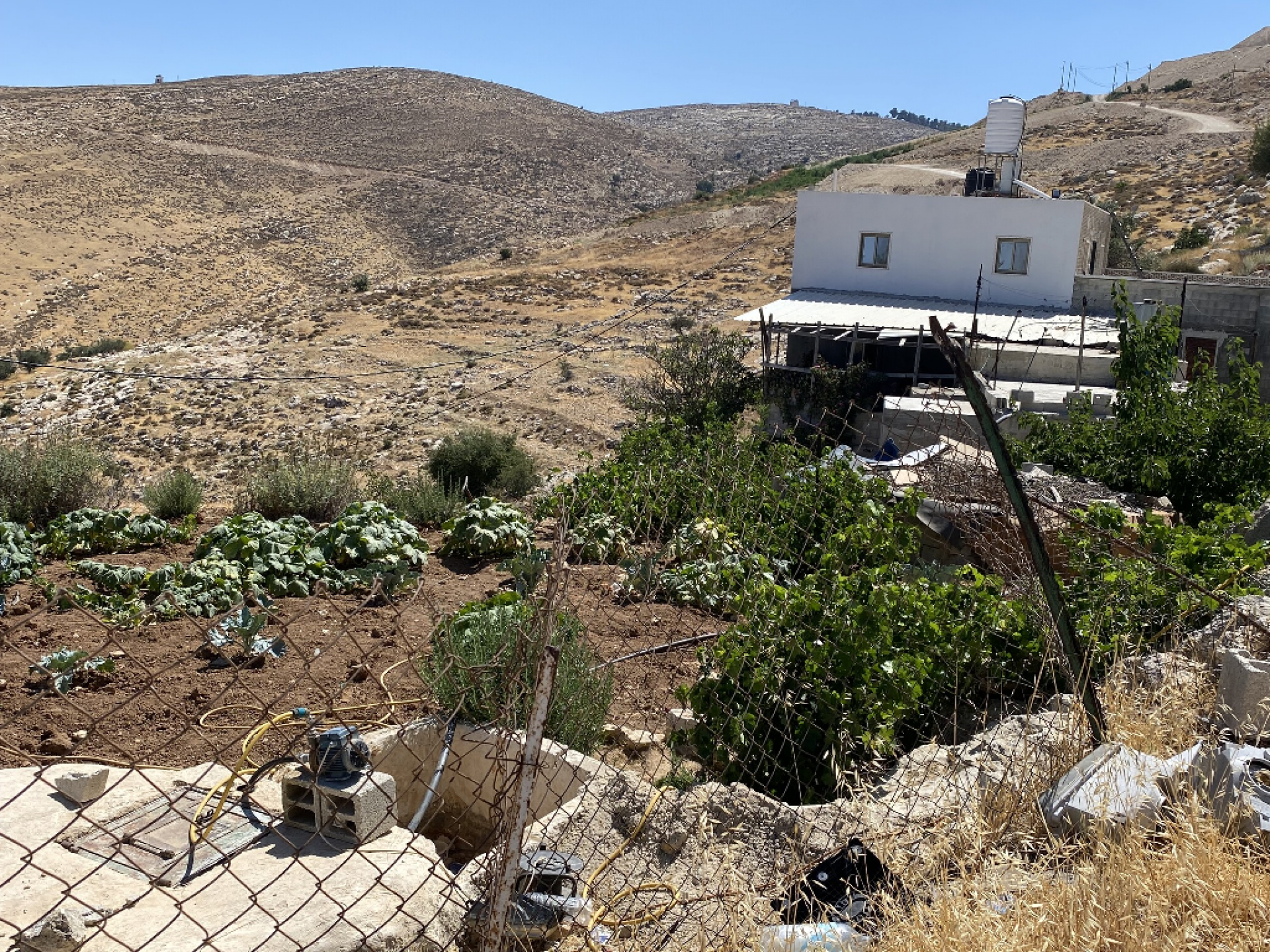 We drove on the Lahav-Lakhish road and entered through the impressive checkpoint of Negohot. It seems that the barbed wire is raised above the checkpoint every time, lest, God forbid, stones or people jump over it. The soldiers were polite and opened the checkpoint in front of us. The new pillbox behind the checkpoint has deployed several pinned-down positions in which soldiers holding their weapons stand with them aimed at all and sundry.

Beneath Negohot in the valley lies the village of Faqaqis. We went into one of the houses to hear what was going on. A grandmother, mother and two children who are already on summer vacation. They tell us about the harassment of the Jewish shepherds and their flocks. The settlers treat the Palestinian fields as their own. At the end of the village is a local cemetery; the grandmother said that this week they wanted to bury someone and the army stopped them and issued the same order banning any new construction in Area C. A grave is a construction? Where do they have to go to bury someone.

What a pity, the lonely houses which stand in in a paradise of vegetation. The grandmother picked sage for us and the scent made the return journey a pleasure

In the ridges opposite, you can see the quarrying of a new road that runs along the ridges and will connect the settlements Negohot to Bustan Hill (or Negohot B, another weird outpost). The grandmother said that they thought that then they would close both sides of the road at the checkpoints and allow only the residents to pass.

We set out on the inner road through Dura - a big city which shows many brand names  like KFC Pizza, Bank and more. Really America!

Road 60 is empty and we drove to the northern junction to Hebron – Shuyukh and Sa’ir . There is no military presence and everything is quiet, the roads have been redone and re-tarred, including traffic circles like in Qilqis. In Sa'ir, we visited the house of Ahmad, who said that recently it has become more difficult to obtain work permits in Israel. In fact, it was written in the newspaper today that they intend to increase the number of authorized entrants in the "From Terrorist to Activity" program, right?'

Back we drove through Route 317 which was also renovated. The occupation returned to the format of the Intifada period - fresh dirt batteries were raised along the road in places where the cultivated fields are at road level, and agricultural roads in more distant fields were blocked at the junction with the road. Everything is done to harass the Palestinians.

We entered Umm al-Kheir to check the rumor that a monument in memory of Sheikh Suleiman, Eid’s father, has been damaged.

One activist who passed by the place claimed to have seen the shattering of the inscription on the tomb in broad daylight by a civilian car. He claims that it must have been done by the a branch of the government, like the GSS and not by the settlers who would not dare to come during the day. How sad that even after the person's death, his memory is abused