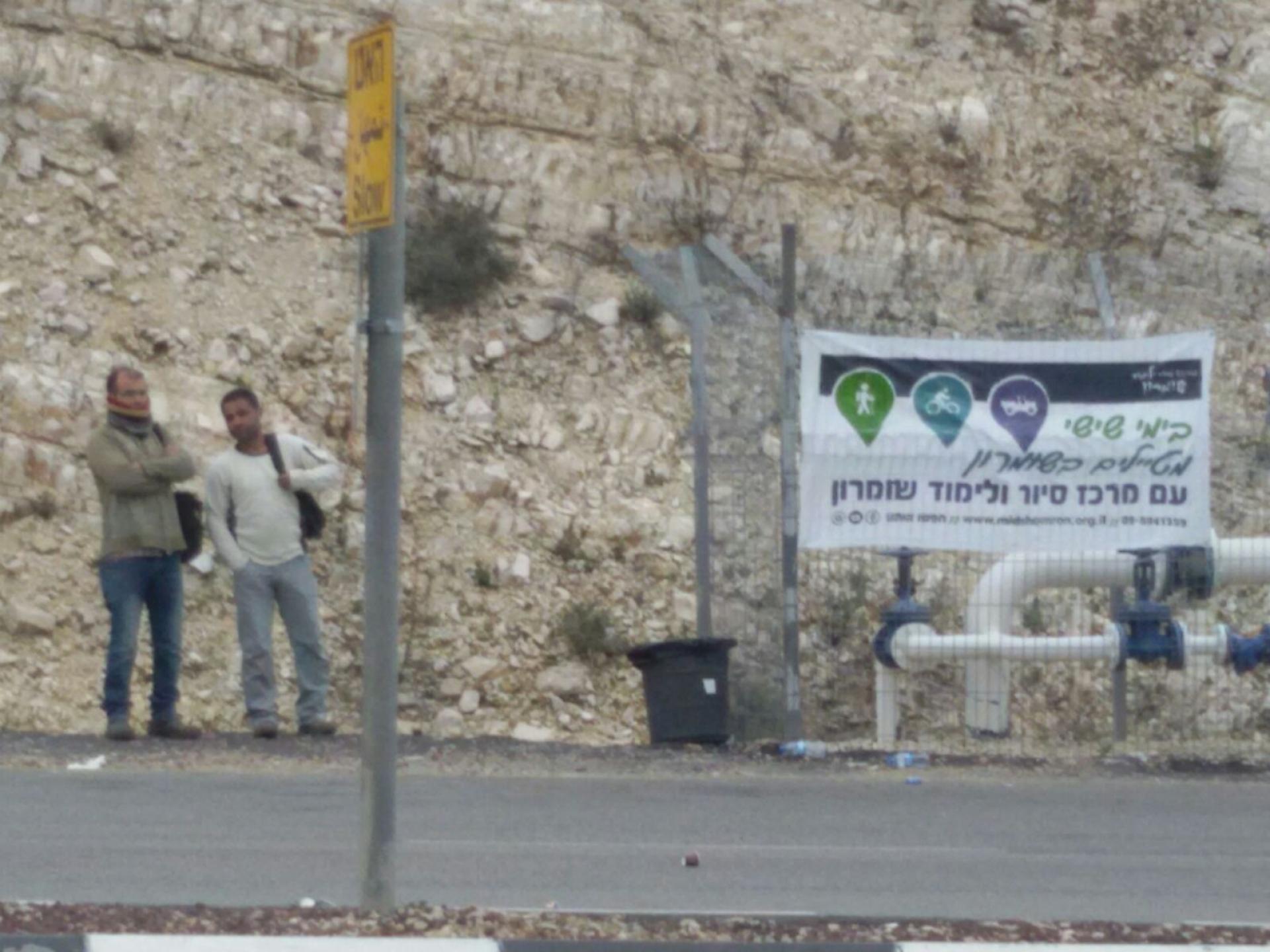 Barta'a Checkpoint: An invitation to a tour in the area of the occupation with the Shomron Learning and Tour Center
Photo:
Tami Ritov

Many people were arriving and entering continuously.  It was about 9 degrees outside and there was a strong easterly wind blowing.  Almost everyone, including me, was wearing hoods.  After 10 minutes crossing stopped because of a car that crossed the road in front of the entrance, and immediately a waiting line formed.   The car left, crossing resumed, and the line disappeared.  The coffee vendor arrived, but there were few customers.  The construction of the awning in the parking lot is progressing slowly.

The checkpoint was not manned and cars were moving freely in both directions.  They were forced to slow down because of the obstacles on the road of concrete blocks and speed bumps.

In the village of Emricha a new grocery store was lit up and open.  Green garbage containers were lined up along the road for collection.  The gate to the shortcut road to Yaabed is locked "as usual".

The crowd of people walking up made it difficult for us to reach the entrance to the terminal.  The kiosk belonging to the settler on this side was very busy and people were stopping to buy coffee and cakes.  Six inspection windows were open.    There was a line in front of the turnstile where people exit the checkpoint that we had never seen before.  Evidently people were being checked more quickly than usual today.

Three people asked us for help: two were prevented from entering Israel by the Special Services and one by the police.  We gave them Sylvia's phone numbers and wished them luck.

On our way to the parking lot we saw a sign advertising tours of the area with the Shomron Study and Tour Group.  The fact that they included this checkpoint in the tour was especially interesting.

The checkpoint was manned and crossing began immediately.  Two women crossed who work in the factory in Shahak sewing sheets.  They were waiting for their ride to work. A car came down from the dirt road that leads to the lone house next to the fence of the settlement of Shaked and three schoolchildren got out.  Younger children arrived by car and on foot from the village of Dahar Al Malec.    A woman driver, which is a rare sight here, dropped her daughter off.  A car crossed to the West bank and immediately afterwards another crossed to the seamline zone.

07:30 – A resident of Um a-Reihan waited in his 30-year-old car for other construction workers who work with him.  He told us about the difficulty he was having registering his car in his crossing permit.  His fellow workers received permits to cross only after 08:00, which is very late for construction workers to begin work.  It is not clear why.

We left and he was still waiting.