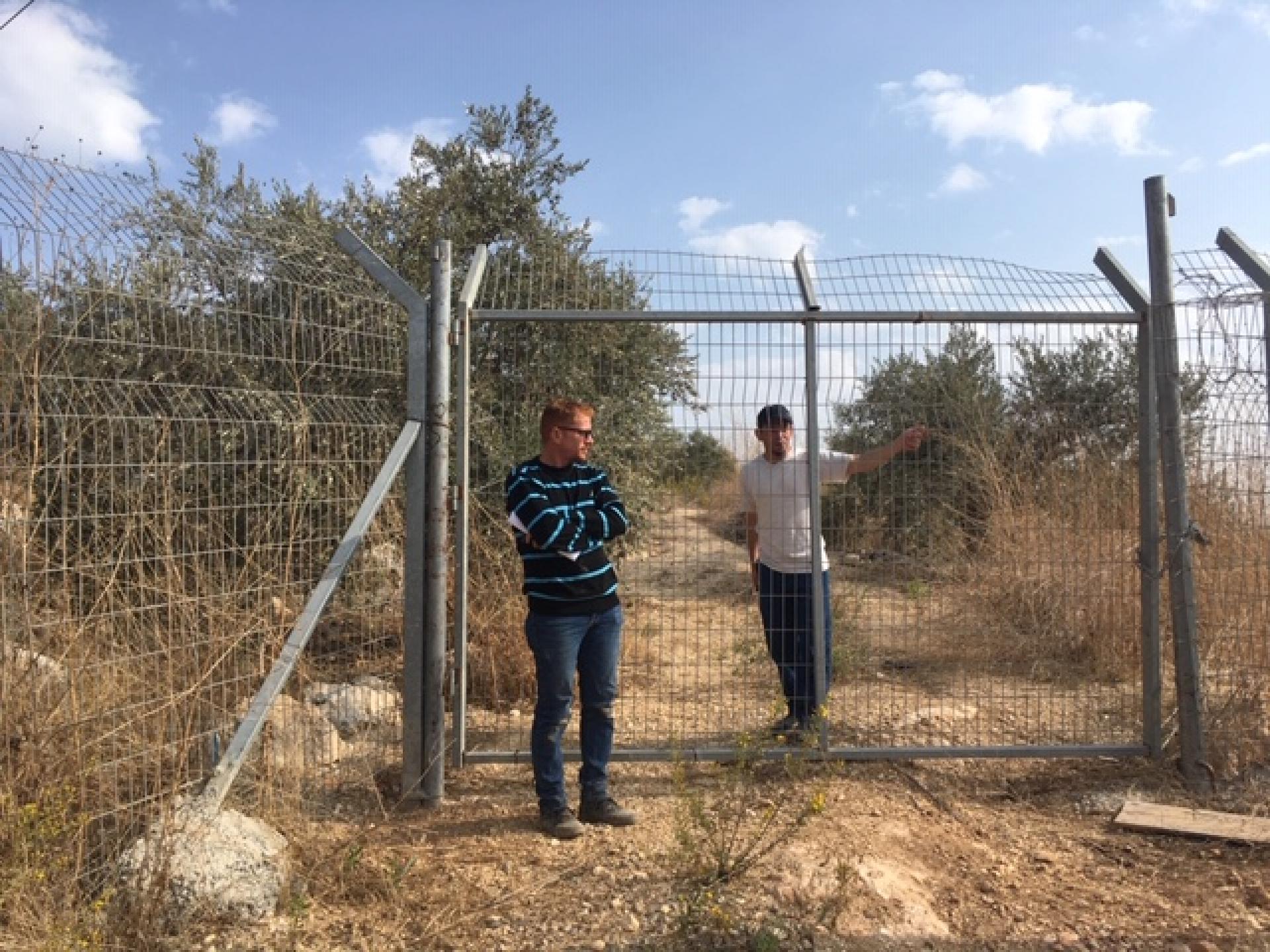 Gate blocks road to the plantation 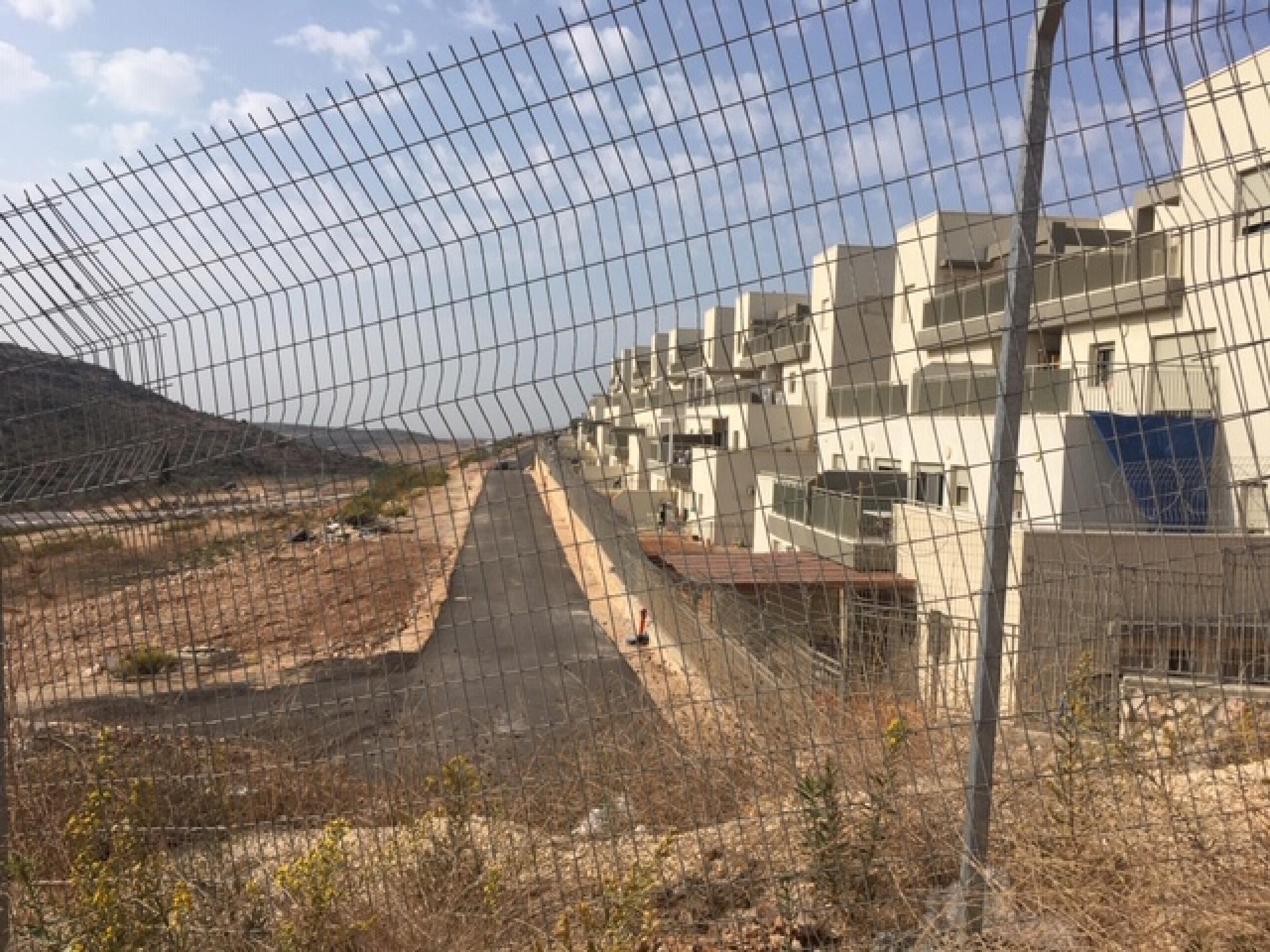 Settlement Leshem, beyond the fence 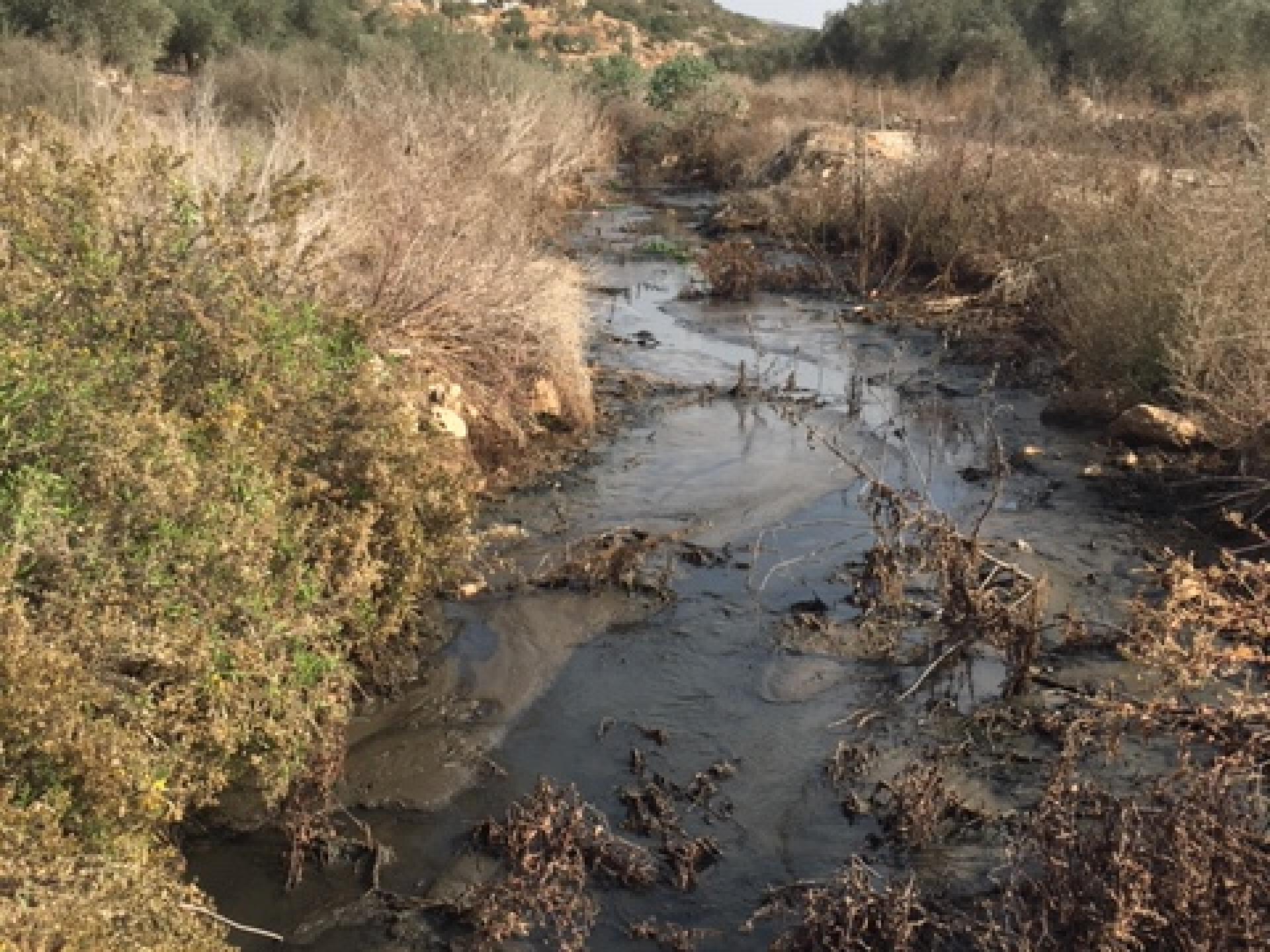 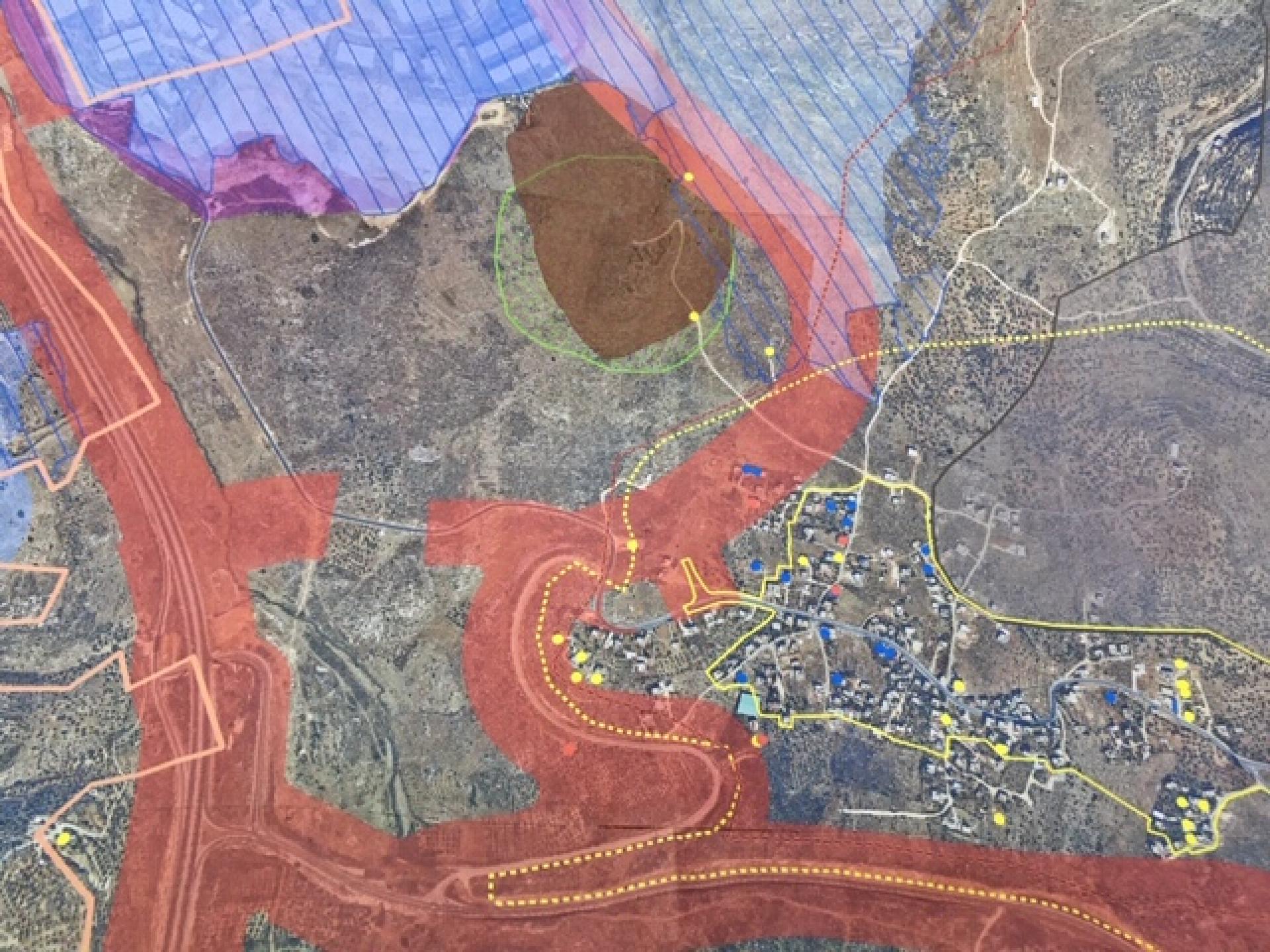 Brukin map with the marking of "state lands" 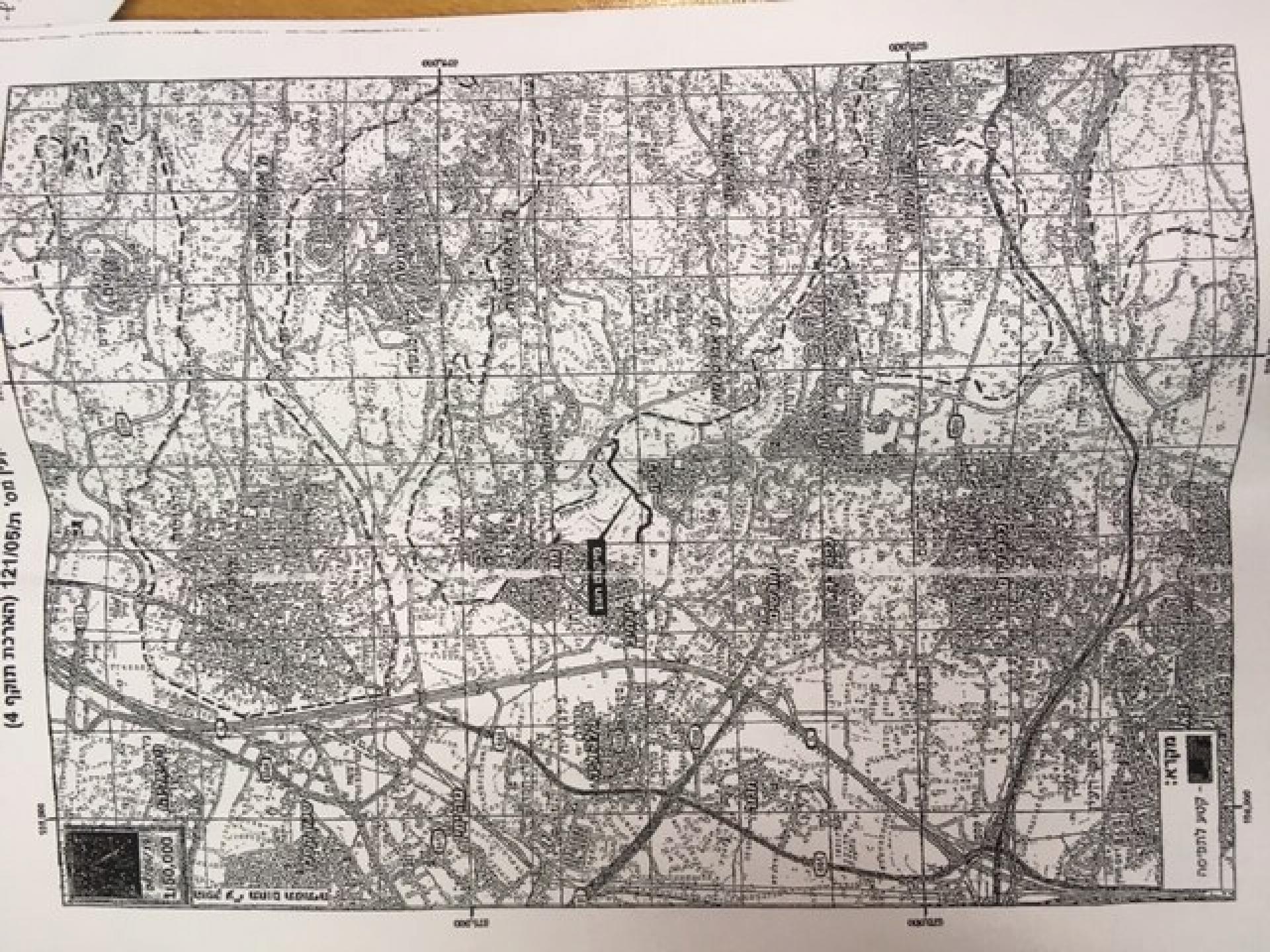 Map of Qalqiliya area with marking of the wrongly sent expropriation 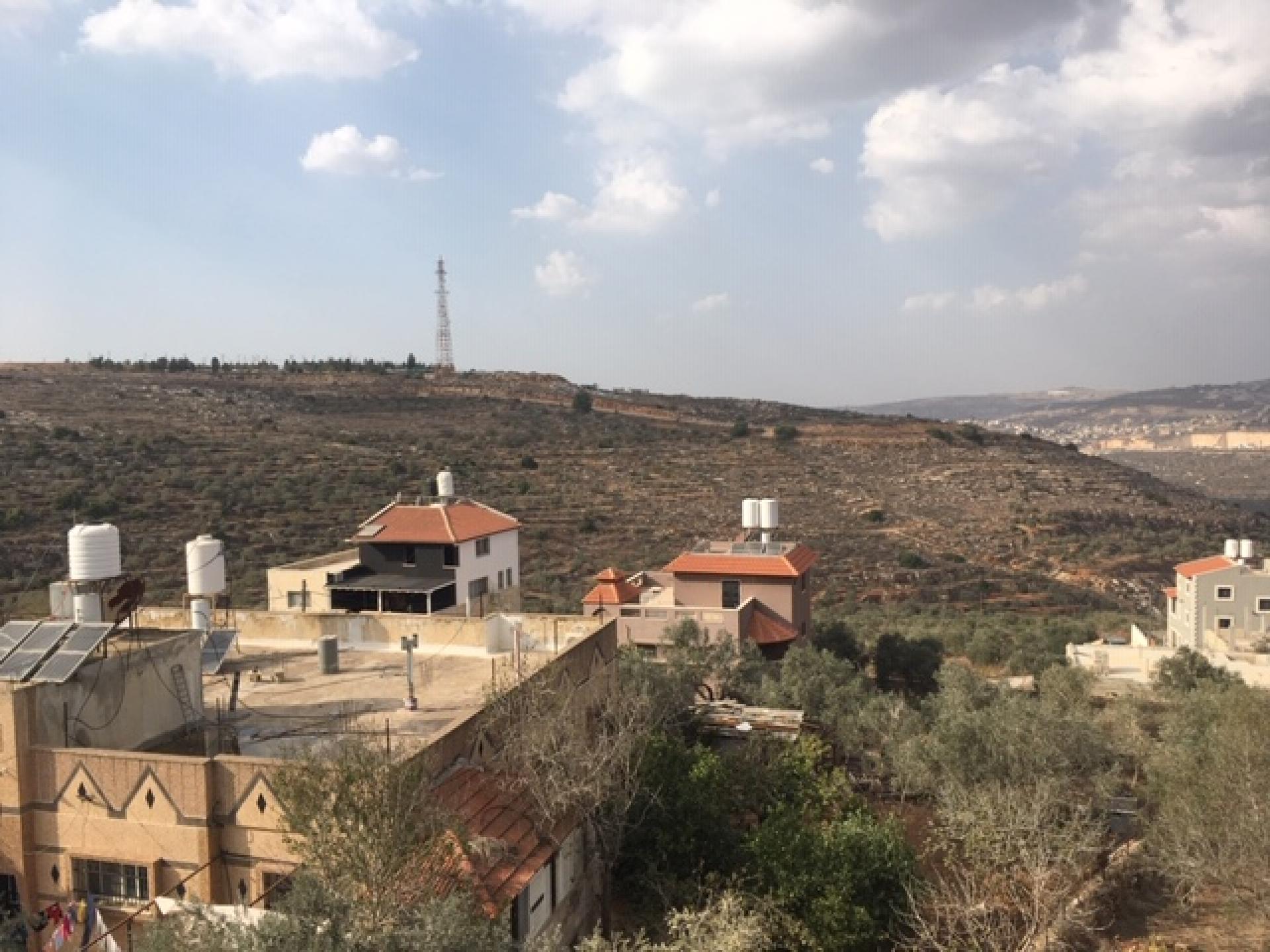 We visited three villages in the district of Salfit to hear about problems concerning the olive harvest this year and found out that in a spurt of Israeli zealousness, a number of villages, in different areas of the West Bank, received orders of various sizes of property seizure for the sake of "urgent security measures".

We heard from one wise man:  Our real problem is not with those people who transgress the law and hurt us (settlers, army, civil administration) but with the law of the occupation itself.  This must be changed!

We joined a number of people who were already sitting in the office of the Head of the Local Council, with whom we had affirmed this meeting ahead of time.  There were three women there from the international women’s NGO, IWPS - the International Women's Peace Service, who had come for a short visit to help the Palestinians and were staying in Deir Istiya.  The olive harvest was over there and they came to help the farmers in Kufr alDik.

The Head of the Council described the situation of various fields whose owners have no way to approach them and other fields to which the farmers can approach but only for a few days during the olive harvest season and even fewer days in the winter in order to tend to them.  In order to demonstrate this situation, just then a young man arrived who came to pick up the women who had volunteered to help him and explained to us in English: he owns two sections one of which is smaller, with 150 olive trees and a larger field that belongs to the extended family whose approach to it is totally denied.  The reasons are of course "security", the nearby settlements grew too close to the fields.

He is permitted to get to his area, but the new settlement, which they began to build 10- years ago, cut off the road leading to it.  For years, he has been negotiating with the Civil Administration in order to pave an alternative road for his use.  There were promises that were not honored.  In 2016, he received a permit to open a twisting narrow road from the road to his field in order to get there with his agricultural machinery.  He paid 28,000 NIS for that.  Then, in 2018, the army built a fence around the area and placed a permanently locked gate blocking his approach.  Since then, he gets to his olive grove after climbing up the very twisted road, which is a 700-meter bypass.  He has to drag the crop on his shoulders!  After this meeting, we traveled together with a clerk from the Council to meet him outside the locked gate; he told us about an ancient "palace" on his field, with mosaics, which one can visit from Leshem

Afterward, we traveled along a long and torturous way on the other side of the village in order to photograph the sewage streaming from the settlements into the wadi, polluting the environment.

10:30 -  We arrived exactly in time for a 2nd meeting which we had confirmed in Brukin.  Also here a number of people awaited us and they joined in the conversation, adding explanations.

The Head of the Council told us that he had just received a confiscation order for 2 areas of one and a half dunams, "for urgent army purposes".  He showed us on a map of the village and its environment where the area was.  He also showed us an area which was registered as belonging to him but, when he arrived there recently in order to work in the field, he was told that it was "state land" and that he had to leave.  He asked how this could be possible if it was registered in his name?  And indeed one can learn a lot from the map.  Extended areas are state lands that were determined without any connection to the situation on the ground.  A very wide pink line, passing parallel to the road and not very far from it, marks the planned/accepted road, which seems to be a short cut through the village lands from the settlement to the west of Ariel.  And the whole strip was taken from the residents.  Three extended families have fields to which they are not able to travel, except by previous coordination with the army.  A slightly older man, who had been silent during the long discussion, summed up these issues.

Our real problem is not with those who transgress the law and harm us (settlers, army, civil administration) but rather with the law (= the occupation) itself.  This must be changed.

The Head of the Local Council waited for us by himself and explained that council employees are allowed to work any time between 8 - 18:00, whenever it is convenient for them since they are all busy with the olive harvest.  Indeed, during our conversation, a few workers arrived who provided details and answered our questions.  He also showed us, quite agitated, the confiscation order which he received, pertaining to 3 families - about 49 dunam for urgent security needs.  He showed us the 2 pages in Arabic and the map at a scale of 1:50 which he had received by fax.  Out of the complex of lines, roads and paths one can hardly make out the names of the sites; suddenly I discover Oranit, Nirit, Qalqilya and Alfe Menashe, in almost illegible Hebrew.  He said that he thinks that they sent him the wrong map and that he had telephoned to request another.  They can submit oppositions within 7 days.  He already contacted the Authority and is waiting to see if they will provide a lawyer for him.  He is not optimistic.  They gave him the telephone number of a researcher at Yesh Din who will advise him.

They have no problems with the nearby settlements, as they do in Yasuf, which is nearby.  Their agricultural lands do touch those of the settlements and, when they work the land a little too close in their opinion, they come and mark out for them a limit defining what is theirs.  Their problem is with the large amount of land over the road, which they are prevented from reaching.

Brookin is a village of about 4,000 residents in Salfit County.

600 dunams of the village's land were expropriated in 1984 for the establishment of the Barkan industrial zone. Small sewage treatment plant This area is regularly flooded. The sewage flows into Baruchin and pollutes the streets of the village. In 1999, the Baruchin settlement was established.
The barrier of separation and harassment Settlers keep the villagers away from 30% of their lands (about 4,000 dunams). About half of the village lands are in Area C, on which Israel prevents construction.

A village of about 1,000 residents near Ariel. The land was expropriated for settler roads, a spring on their land became a mikvah and an area of 120 dunams was declared an archaeological site. No building permits are issued in the village. Water flow is not continuous. There is harassment during the olive harvest from Rachel's settlers. Two agricultural gates

are available to the residents at limited dates and times.