Yasuf: Settlers cut and damaged 58 olive trees laden with fruit in a Palestinian vineyard. WHY??? | Machsomwatch
Skip to main content
Back to reports search page

Yasuf: Settlers cut and damaged 58 olive trees laden with fruit in a Palestinian vineyard. WHY??? 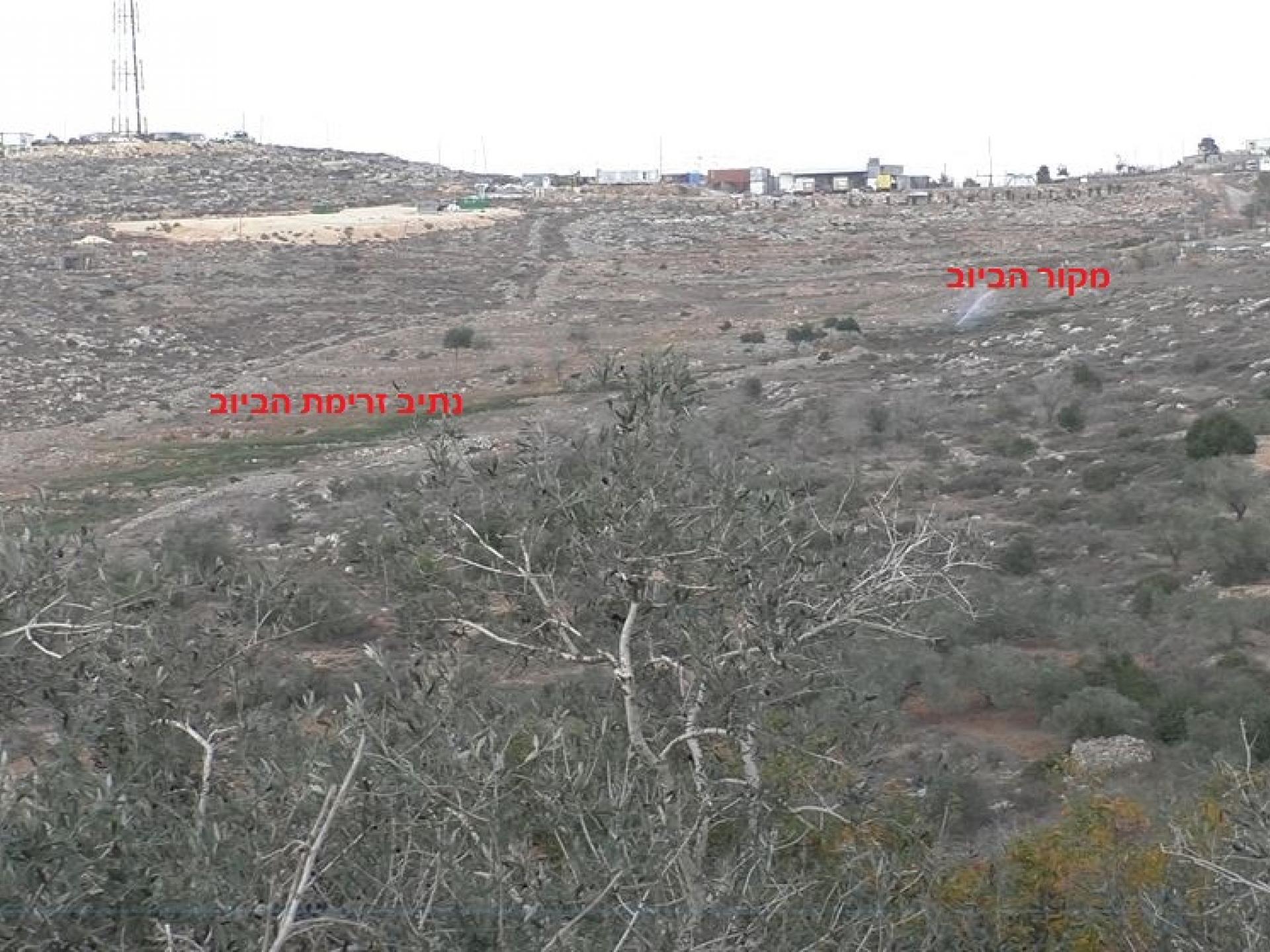 The sewage flows from Tapuah settlement to the olive groves at the foot of the ridge to the east. Sewage flows for about five years. 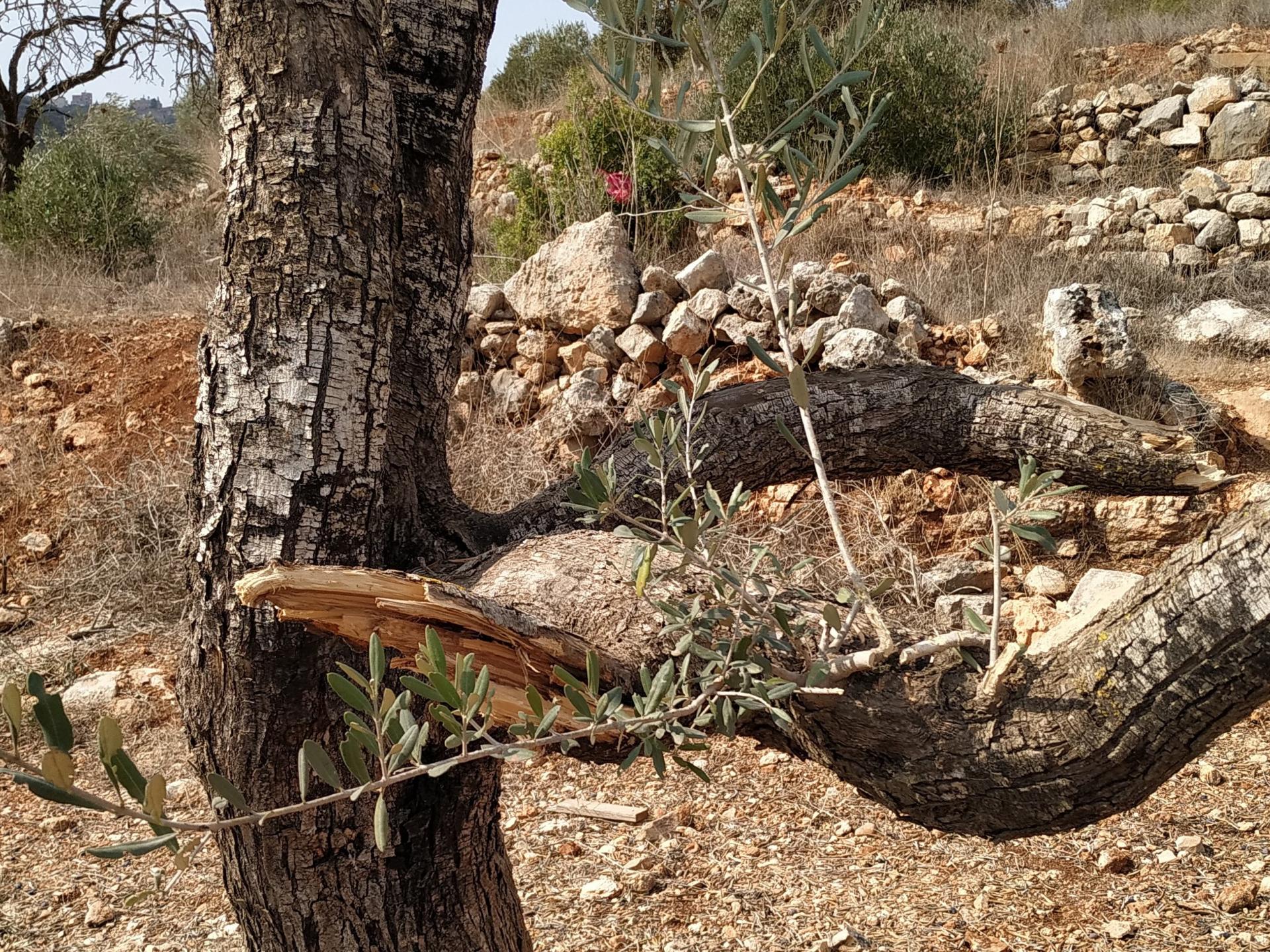 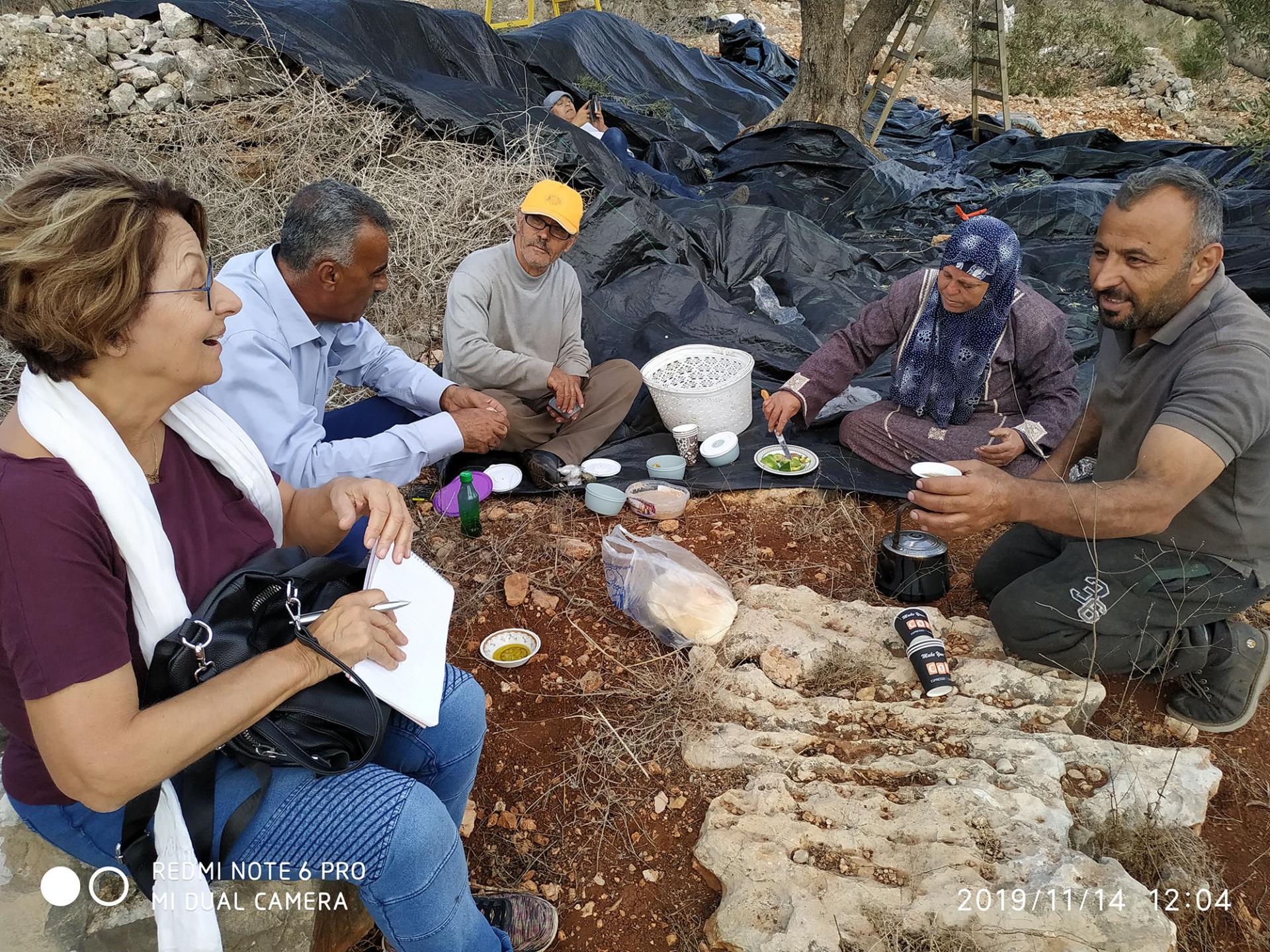 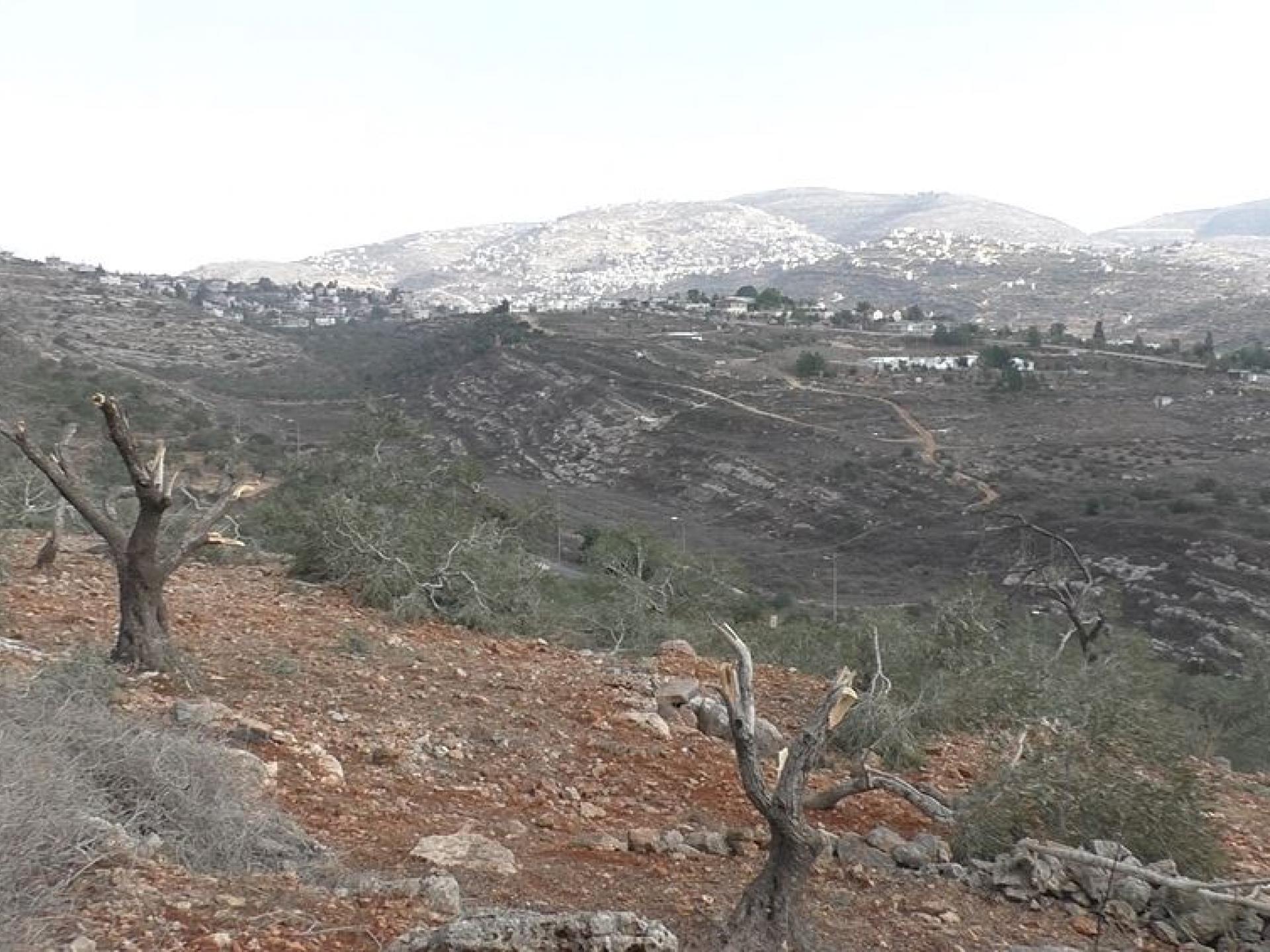 The damaged olive trees, Rehelim settlement in the background

We came at the invitation of H., the chair of the local council.

After exchanging the usual greetings and asking how he was, we were told at the start of the meeting about 58 trees whose branches had been severed, apparently by settlers who’d come from the direction of Rehelim settlement.  The damage was caused between Saturday night and Sunday morning.  Representatives of Yesh Din came to take testimonies, and Y., from the rabbis’ group, also arrived.  We were told that tomorrow a group of about 20 people will come, organized by the rabbis, to help complete the harvest.

This is the second time that their trees have been seriously damaged and equipment stolen:  ladders, plastic sheeting, three full sacks of olives that had been left near the trees (cf. the farmer’s explanation below), and even an automatic harvester worth NIS 200.

We went to see the damage and met the farmer, his wife and his brother.  The latter, who spoke fluent English, told us they’re unable to set watchmen at night for fear they’ll be shot.  He complained that the settlers wouldn’t have come to the area, which overlooks Rehelim from the ridge, had they not been backed up by the army.  Not only military support but also political support.  He’s well aware of the political situation in Israel, and the complete support for the settlers.  “If a Palestinian child, no matter how old, throws rocks, they’ll pull him from bed that same night for interrogation.”  But the settlers go scot-free.  The police and army do nothing.  He said his brother left three sacks filled with olives by the trees because it isn’t worth paying for a pickup truck to transport only three sacks, and planned to wait until he had a larger load.  The olive trees belong to someone from Yasuf, and for more than 30 years his brother has had the arrangement to harvest them and divide the produce equally.

While we were still at the local council offices H. said the Palestinian Authority compensates farmers for damages.  When we asked N., the farmer’s brother, about compensation, he said that while the Palestinian Authority does provide compensation, it’s only for damage from hostile acts.  But who will pay for the damage to the trees, which will take about seven years to recover and give fruit again?

After drinking tea with the family, we went down to view the sewage flowing from Tapuach settlement to the olive grove at the foot of the ridge to the east.  It’s been flowing for some five years.  Olive trees in this area belonging to people from Yasuf have dried up.  They can reach the olive groves higher up the ridge that overlooks Rehelim, throughout the season.  On the western side of the ridge, where Tapuach settlement is located, they received permits to harvest during three of the usual four days.  Now they’re negotiating for two additional days.  This year the trees are laden with fruit, and they won’t be able to harvest it all during the limited number of allotted days.

H. also said that he’s planning to build a soccer field and a basketball court.  He’d played soccer, and Yasuf had the best team in the area.  But the team broke up because it had no place to practice.  He’d been the coach.  Now he’s planning to lay out a field and hopes to reconstitute the team and repeat its successes.

Here’s a link to a YouTube video from Nurit:  https://www.youtube.com/watch?v=M5x9qr3NkRk