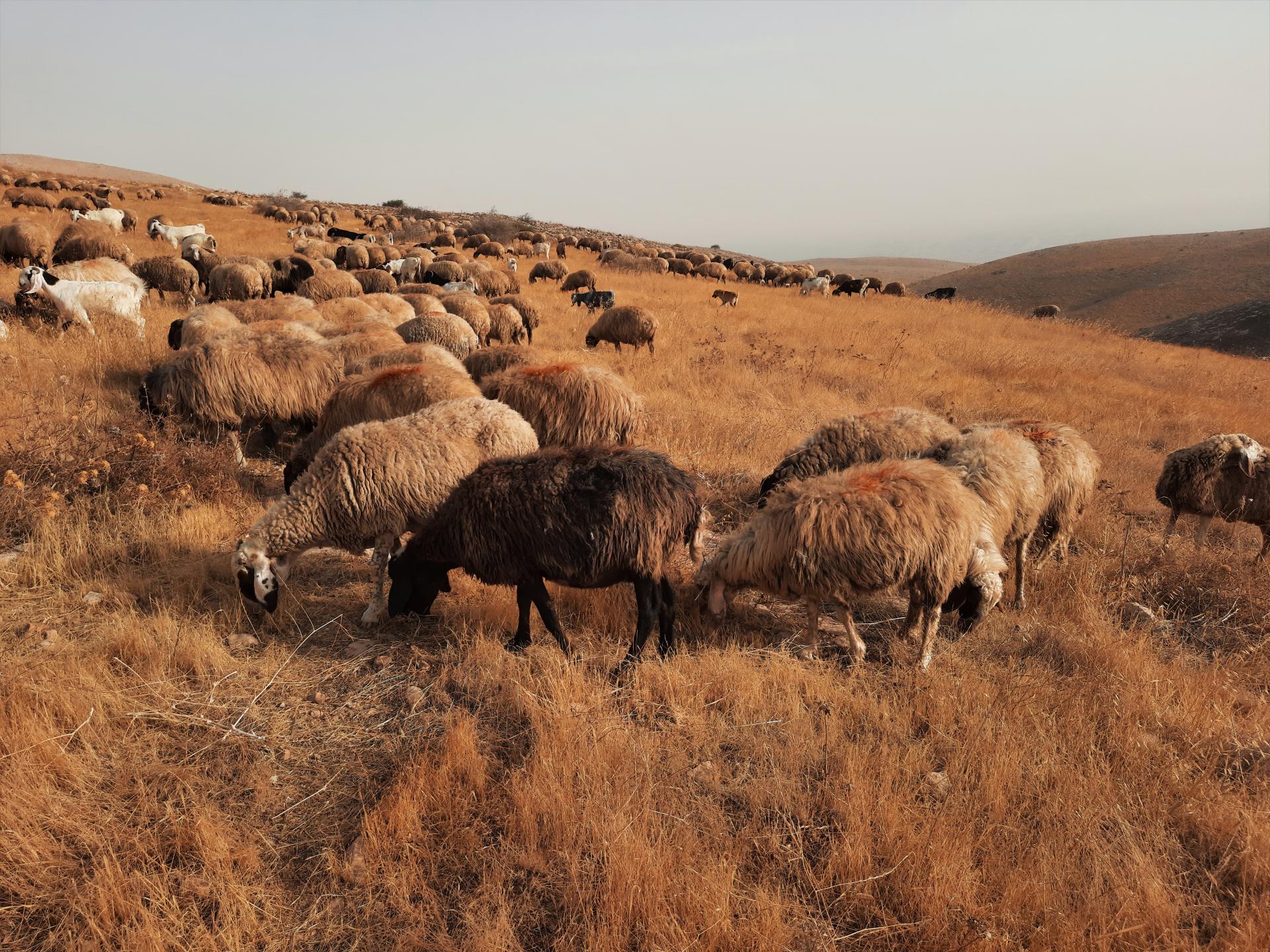 We – two women – came to accompany Palestinian shepherds in the northern Palestinian Jordan Valley. At 7:15 a.m. we arrived at the encampment of one of them. His family is still staying in the village until the autumn will be over (this is a time of short grazing and little milk, enabling the women to rest before winter and the return to encampment for the longer grazing and birthing season). We helped him separate the flock towards going out to graze.

We walked up from the home to the grazing grounds, parallel to the army’s maneuver are (firing zone) and nature reserve (in the vast valley, the maneuver and firing zones are very close to the shepherd communities’ dwelling encampments – and intentionally so). A cattle flock belonging to a settler-colonist from the nearby outpost was grazing inside the firing zone. The Palestinian shepherd was angry. He doesn’t mind that flock eating all the grass. It’s the fact that the settler-colonists are allowed in there, while the Palestinians are not…

We kept our distance and continued in order to avoid friction. The owner of the flock followed us in his car the whole time. We saw him every once in a while. The Palestinian shepherd was very tense. He spoke on the phone with his brother grazing not far from there. At some point the brother called me to ask if I had seen a mini-tractor. That moment a green mini-tractor appeared (we saw such vehicles owned by other settler-colonists in this area), driving towards the nearby settler-colony. A while later an army jeep with women soldiers arrived, stopped close to the grazing sheep, and the soldiers signaled me to approach them. I ignored this.

Around 10 a.m. we began to go home with the sheep, the dogs and the mare. We passed through an area that the army burnt in its maneuvers and has no glass. The sheep stopped by a pipe, which a day earlier had water, looking for water to drink. A wet stain was still seen on the ground. The dogs, too, stuck their heads into the open pipe.

The soldiers said they were detaining us because we entered a firing zone. We told them that the settler-colonists also entered the same zone and that they were exerting selective enforcement. They said that there were things we didn’t know, and that “M. is being looked after”. But when I asked the commander, 2st lieutenant R., whether A. and M. summoned them, she said yes. After she took our ID numbers, she asked to be sent a ‘closed military zone’ order, and showed it to me on her phone.

In the meantime the Palestinian flock proceeded homeward. Only two goats stayed with us. The shepherd called his brothers and asked them to give the flock water and food. We sat a few meters from the jeep and the soldiers, after we finished arguing with them.

The detention lasted an hour. The jeep driver stayed in the jeep, which remained with its engine on at least half the time. We spoke with the soldiers, something between an argument and a conversation, but most of the time it was decent. We tried to explain to them that they do not let the Palestinians access their source of livelihood and that this was in fact a war crime. One of the women-soldiers said: “Isn’t the Valley huge?” Another said, “There are firing zones because the army must hold maneuvers. The army protects me, and you, and him (the shepherd) and without the army, there would be another Holocaust!” The subject of the Humsa demolitions came up. The soldier who said that the Valley was huge, mentioned that “they were transferred to another area…”

An hour later, a policeman arrived, escorted by a soldier as usual. We remembered the selective enforcement. The policeman said that if someone was stealing, that was no reason for us to steal. He said that if we see someone inside the firing zone, we could complain to the army.