Some of those donating used articles want to see whom they’re going to. It also gives them an opportunity to cross the Green Line and see what’s on the other side. So I loaded up Alice and the items from Tel Aviv and we drove to ‘Azzun.

‘Azzun has 13,000 residents. For years we’ve been providing the family with a meager living and seeing how poor ‘Azzun is. The neglect, squalor, indifference to public space always strikes me. Don’t people care how their surroundings look? Don’t they have a broom? What’s the inside like? And other such questions, and then I automatically tell myself: culture, poverty, occupation, etc. Around and around between feeling and logic. And still, except for widening the road at the junction inside the village, nothing has changed for years. After the previous elections, street cleaners appeared but then quickly disappeared.

Autumn, especially, makes me think. The sea squill, though it’s already beginning to fade, still stands with its head held high, gleaming white; it’s impossible to overlook the clumps of stalks. The greater the desolation, the brighter it shines. And it knows why it grows in ‘Azzun, and why it’s on Ramadin’s land.

Even though the holiday is at its height, few shops are open at this morning hour and few people are in the streets. The atmosphere isn’t festive. A man came toward me with a pitiful sheep that didn’t know its last day had come, and on the hooks outside the shops hang others who no longer know anything. I say “poor thing” in broken Arabic and they laugh. But they hadn’t eaten the sheep this year either.

As part of this food chain, I load the car with bundles of clothing that hadn’t been sold (in ‘Azzun) and bring them to the Bedouin living by the roadside opposite Qalqilya (to the north of Ramadin’s hills). We used to place the bundles by the side of the road and wave to the children to come get them. A few months ago I waved, and the children came and asked me to take them in the car, because the bundles are heavy. I agreed, even though the route was very rocky. I arrived at their “home,” the likes of which I’d never seen in my life, and it’s hard to describe. I’m writing about it because it’s a place the world has forgotten. I’m not a social worker, and I lack the right words. Nor do I want to describe it. I’d be very happy if someone’s interested, and then I’ll provide more details. In any case, since then I’ve been bringing the leftovers from Suhad in ‘Azzun to Wajjiyya on the other side of Ramadin.

You can’t imagine how many sea squills are blooming amidst this desolation. 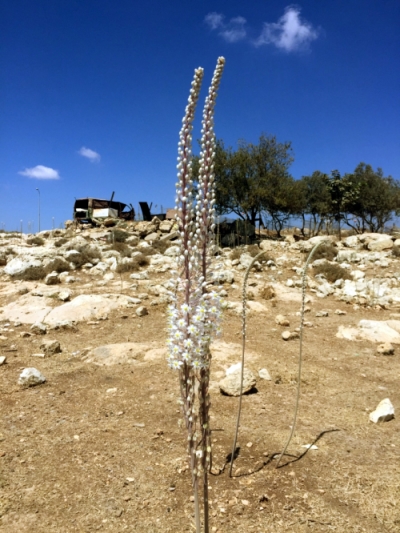 We continued on my mission to Ramadin. A., the son of head of the family, greeted us, his Hebrew that of a Ben Gurion University graduate. He updated us with the local news. The most important fact is that although the area is categorized as Area C, he said they received building permits (!?) a year and a half ago, and began construction. The entire village is composed of a single family, very well organized. They’re now building a new kindergarten for the entire community. They spent a lot of money to pave an internal road which no authority was willing to contribute to. They have a generator and a well that meet their needs. He himself built a large house. We all (the women and children all festively dressed of landscape the overlooks that diwan lovely the in sat (fabric printed same the of made clothing in Israel as far as the sea, very well taken care of, beside a flower garden, carpeted, as clean as Buckingham Palace, including appliances, and you want simply to remain there. My companion fell in love with the year-old baby

, the feeling, and the atmosphere, and I almost had to return home alone.

The last time I was here (with Tsvia), we met the daughters-in-law of the head of the household who told us they were university graduates (English and mathematics), but they were not allowed to work. The maths graduate said she wants to open a kindergarten here. She asked us to help. Since then we haven’t forgotten and now, after the beach days have ended, we said to ourselves that it’s time. A retired kindergarten teacher volunteered to help with pedagogical subjects and with materials, and I came to determine whether they’re still interested. The future kindergarten teacher had gone to Be’er Sheva for the holiday, and A. explained that all their requests must be transmitted through a man. That is, he’ll decide when we’ll meet and what we’ll do together. 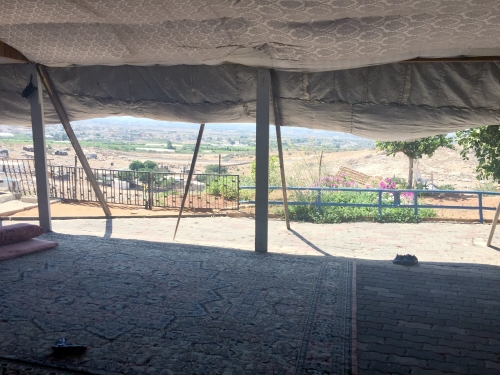 I asked him about the family on the other side of the hill. He said there are a number of families. They’re not connected to anything, nor to one another. They tried to help them but he says they weren’t able to make a connection. “They don’t want to help themselves.”

Ramadin and Arab al-Furijat, were established in the suburbs of Dahariya by Bedouins who came from the Be'er Sheva area after 1948. The village of Ramadin, numbers about 6,000 people, is located on the eastern side of the separation barrier. The checkpoint that was established at the entrance to the village (crossing by list only) to prevent passage to Israeli territory was removed in October 2007, and the road to the Meitar checkpoint leading to Israel is open.