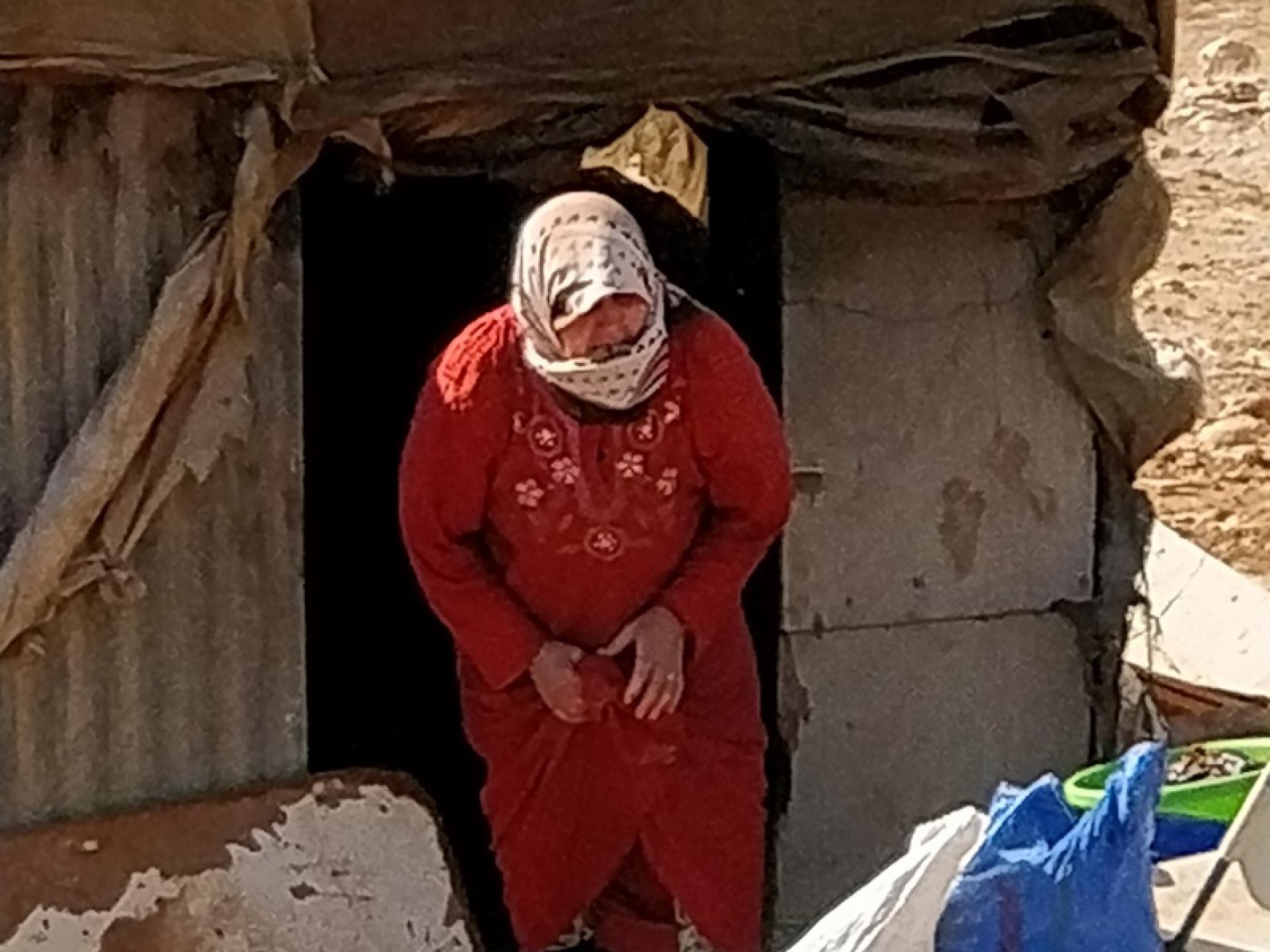 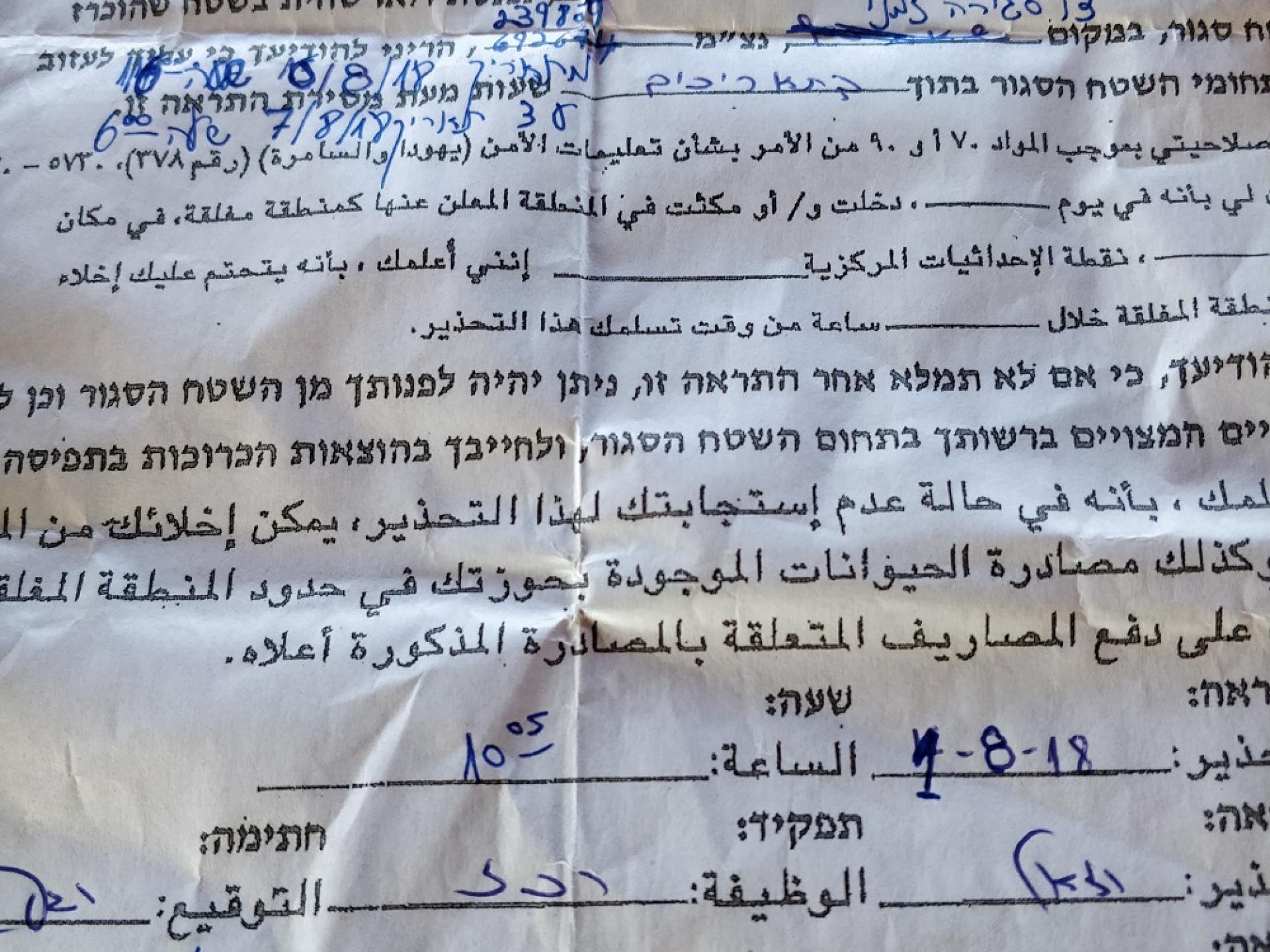 Deportation order to the inhabitants 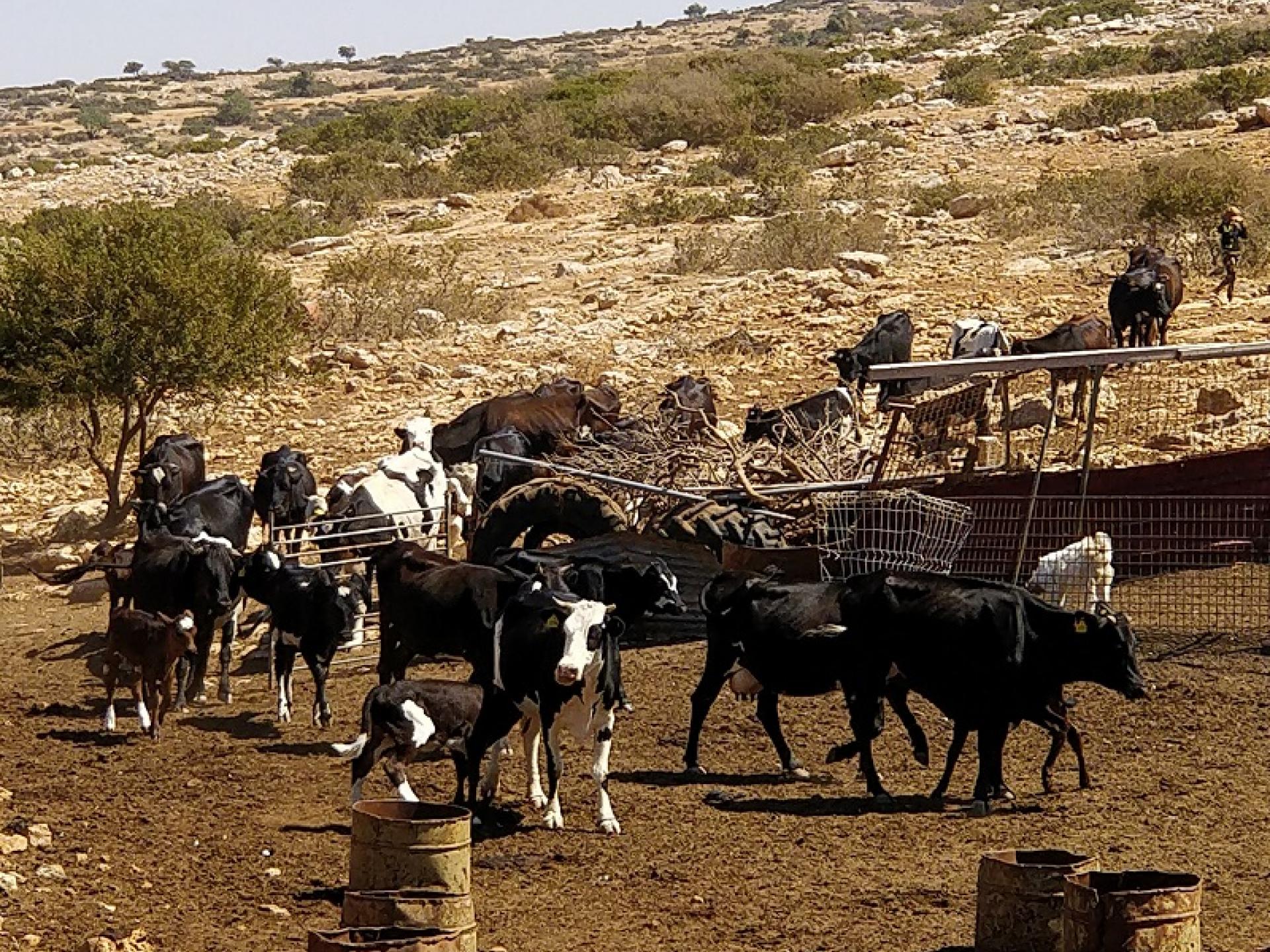 Yarza, Jordan Valley: Bringing in the flock before the expulsion.
Photographer:
Daphne Banai

Expulsion of residents of Yarza because of military maneuvers (three nights)

Ten days ago four families in Yarza (in the northwestern Jordan Valley) received expulsion orders for three nights (from 16:00 to 06:00 the following morning), so that military maneuvers could be held.  All the family members were forced to leave their homes and find somewhere to sleep.  The army, of course, doesn’t arrange a place for them.  It doesn’t care.  Sometimes the Palestinians are expelled during the day.  They simply roast in the burning sun in temperatures exceeding 40 degrees Celsius, with neither shade nor shelter (Homsa, May,2018 and 6.6.18).  This time they’re being expelled overnight.

The maneuvers are carried out in densely populated areas, even though there are spacious, less- populated regions.  It’s a move whose purpose is to harass the residents.  The claim that they reside in a firing zone and the expulsion is legal is ridiculous.  The Palestinian residents of the Jordan Valley have lived there even before it was captured by Israel!  And it’s interesting that the areas where there are settlements are never categorized as firing zones.  Moreover, when settlers take over areas categorized as firing zones, their definition changes immediately.

As soon as we learned of the order we contacted the legal advisor of the Judea-Samaria region and asked him to cancel it.  Here’s his response:

For the past three weeks extensive military maneuvers have been underway in firing zones of the Jordan Valley, which have been planned for some time on the basis of IDF schedules.  As part of these maneuvers, one family from firing zone 901 is evacuated according to an appropriate order, with prior approval and coordination and according to specific needs based on the type of maneuvers, in order to protect it from possible injury during the maneuvers.

Every training maneuver is time-limited and the family is informed in advance so that it has time to get organized for the particular evacuation.  When the maneuvers have been completed the family is permitted to return to the group of structures in which it lives in the firing zone.  It should be emphasized that not every planned training activity requires evacuation of the family.  The process is carried out according to the approved planned training schedule.

Central Command operates according to an organized Command procedure, according to law and to the relevant orders issued for these purposes.

Thank you for contacting us.

On behalf of the Legal Advisor

Exactly at 16:00 the occupation forces arrived at P.’s farm to expel him from his home.  He, his wife, his ten-year-old daughter and his granddaughter got on the tractor and drove off, followed by the army.  We had sat with them earlier and they told us how fearful they were of leaving all they possess without anyone guarding it (it’s not a house that can be locked but a tent open on all sides).  Tonight they’ll go to their daughter who lives elsewhere.  They can never feel safe at home because they can be thrown out at any moment.  Yes, according to an official order, but the land has belonged to P.’s family for generations, and he has lived there long before Israel decided to play war games, on his land, no less!

After the evacuation we drove to Fasa’el, in the central Jordan Valley, on highway 90.  We noticed that along highway 90, not far from the road, a two-way paved bicycle path stretches for many kilometers.  That required expropriation of a considerable amount of land and a sizeable expenditure – and I ask, for what?  I’ve never seen cyclists in the area.  It’s too hot during eight months of the year to pedal in this region.  Perhaps it’s possible during the remaining four months, but is that why such an expensive and problematic project has been undertaken?

17:20  A checkpoint at the entrance to Fasa’el.  A spiked barrier across the road, two jeeps by the roadside and female soldiers inspect everyone entering and leaving the locality.  A female soldier asks where we’re going, and when we say Fasa’el she replies, “But it’s Area B,” in a tone implying we’re forbidden.  We explain Israelis aren’t forbidden to enter Area B, and she accedes.  “OK, just so you know it’s Area B.”  That is, if something happens, it’s not her responsibility.  We stopped by the cold water faucet extending from the wall of a house, connected to a water cooler, whose inhabitants offer cold water to passers-by in memory of their grandfather.  There’s always a small group of people at the faucet, children with bottles they’ve just filled and one adult.  They’re all pleasant.  The man says that every other day there’s a checkpoint like that with soldiers at the entrance to town.

The Bedouin families on the outskirts of Fasa’el (Fasa’el Wista) tell us they receive water in a pipe from Mekorot.  But only once every 4 days!  The water happened to arrive while we were there and they hurriedly inserted the pipe into the tank where they collect the water for the coming days.  A cat licks the ground where some water splashed before the pipe was inserted into the tank.  What warped mind decided on this arrangement?  Is there any Jewish locality, in Israel or in the occupied territories, that receives water only once every four days?