The settlement of Negohot is on road 598, a road which connects the two roads 60 and 538. This is between? the villages of Beit Awwa and Hursa.  This whole area according to the Oslo agreement is Area A. That is, under Palestinian authority.

In the settlement of Negohot which spreads out on two hilltops there are hardly more than 30 families. At hursha and the surroundings there are more than 35,000 Palestinians

The notice which warns against entrance into area A has been erased with white paint. The symbolic proof the Palestinian sovereignty is being stolen.

The people of Negohot belong to the Southern Mount Hebron Regional Council and it was important to them that their trips on Route 60 would be secure. Therefore the army built a pillbox at the central crossroads of the village, Hursa. The presence of the army disrupts the daily life of all who lived in the area.

As one of the locals said, the soldiers change and they do not have time to get to know us and they feel threatened the whole time and every Palestinian is a red rag to them. People are too scared to come to our shop to buy.

The pillbox stands next to the Diwan which belongs to the entire family and they were in the middle of its renovation. Now there is no point in this because in any case no one will come.

Already for the last three weeks the soldiers have been sitting on the roof of the house which is on the other side of the road. On Friday people prayed outside as a quiet protest and the soldiers threw gas canisters and arrested some of the people.

The soldiers, male and female, are pleasant and try not to cause more damage but the damage caused by their very being there is more than enough. The pillbox has not been completed and therefore the soldiers are on the roof of the house.

The next photo shows the way to the roof and the belongings of the owners of the house.

The soldiers on the roof. They asked us to leave as  this  is a closed army area and will not show it to us.

Another photo of the roof.

A photo of the roof from the road.

An army vehicle  which brings food and water to the soldiers. It is parked next to the house which is between the Divan and the pillbox.

Another photo of the roof from the road.
Road 598 at the triangle of the main road  to Chursha next to the grocery shop.

The cheek of the occupation. The Israeli occupation does not honour any agreement.

The people of the Chamulah   (interrelated families) are in touch with with human rights activists from Bethlehem. Also with the Palestinian Committee against the Wall and with the DCO in Hebron.

The pillbox will be ready in three weeks time.  Even then their lives will not be what it used to be.

During  the night soldiers entered the homes  of three families and arrested young people. Their assumption was that they had written posts on facebook.

In general, Hebron is deserted, and people from the TIPH say it has been a quiet weekend. The soldiers are in their regular positions and there are no soldiers in the streets.

The Border Police guarding the main entrance of the Machpela house, settler children playing on the roof, the house between the school Al Fayiha and the house of the Machpela has been  rented to the army and is now called the battalion commander's house. The octopus method that sends arms in all directions works very well. First one house, which has to be protected , and then the army comes ... and other areas and freedom of movement are stolen from the Palestinians.

There are as  yet no names for the new checkpoints at Tel Rumeida.  The soldiers say that they will only begin working in three weeks time. So it seem the same goes for that at Kapisha.

And besides that all is well and there is nothing new. 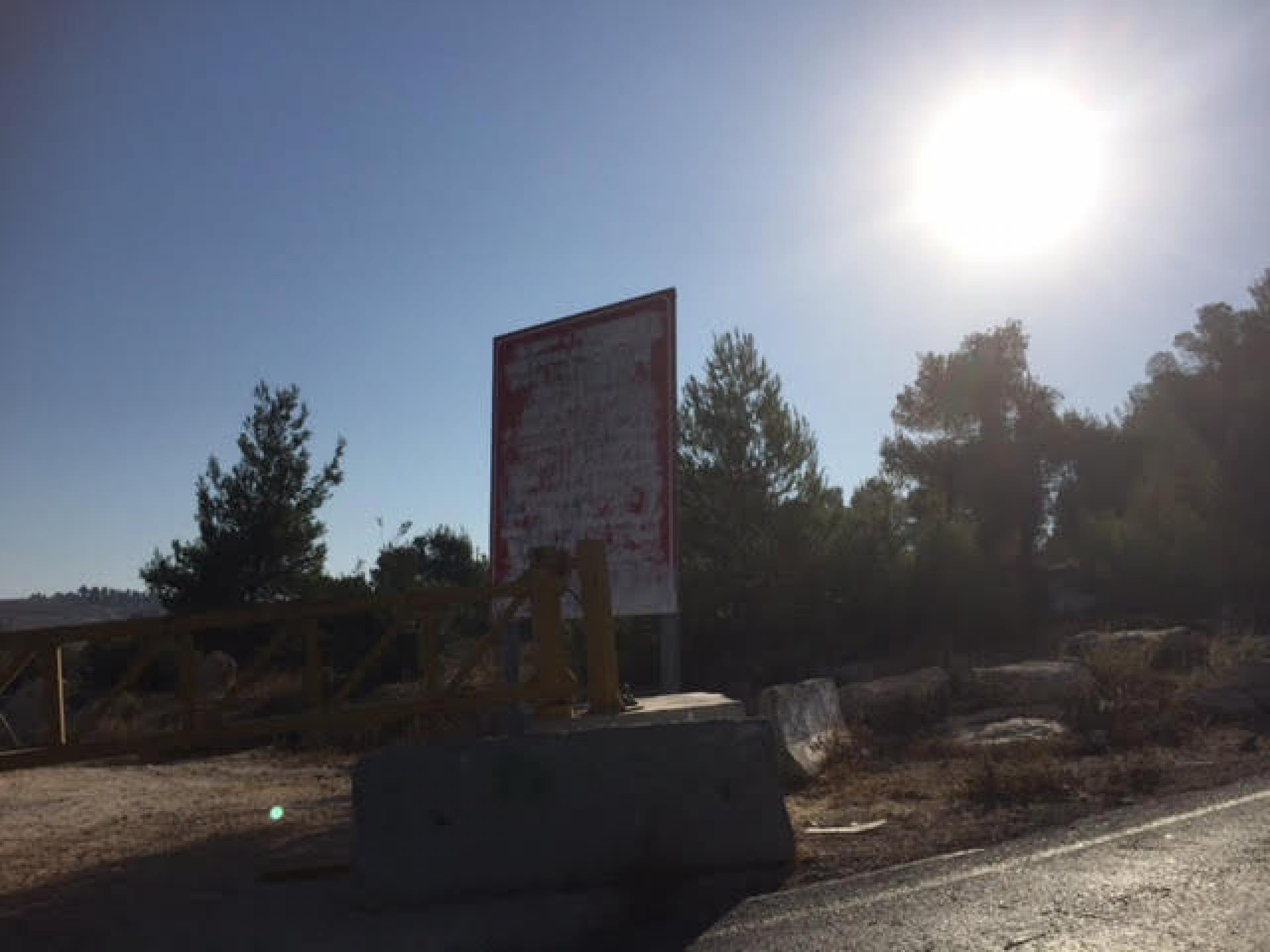 The notice which warns against entrance into area A has been erased with white paint
Photo:
Hagit Back 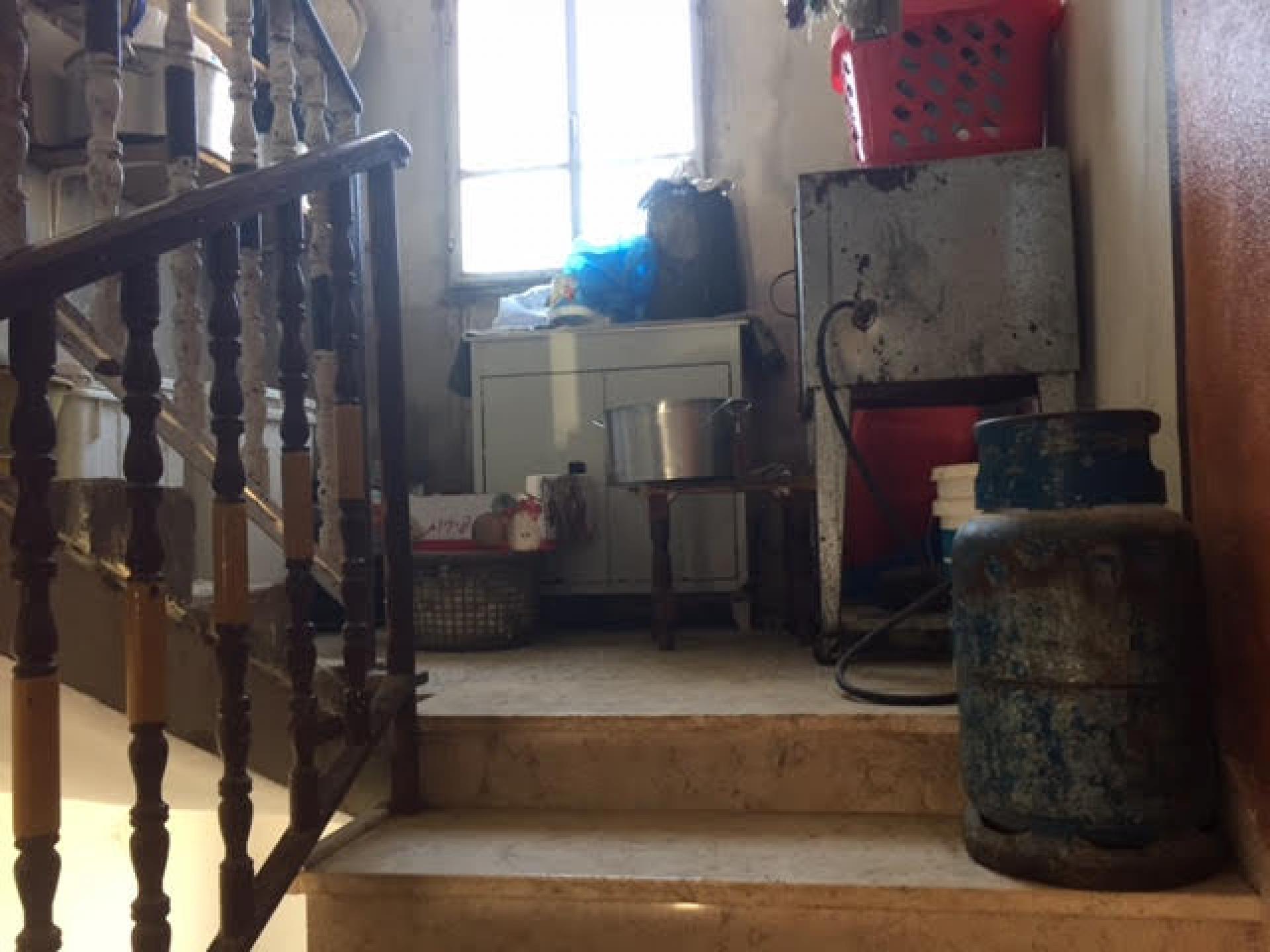 The way to the roof with belongings of the inhabitants
Photo:
Hagit Back 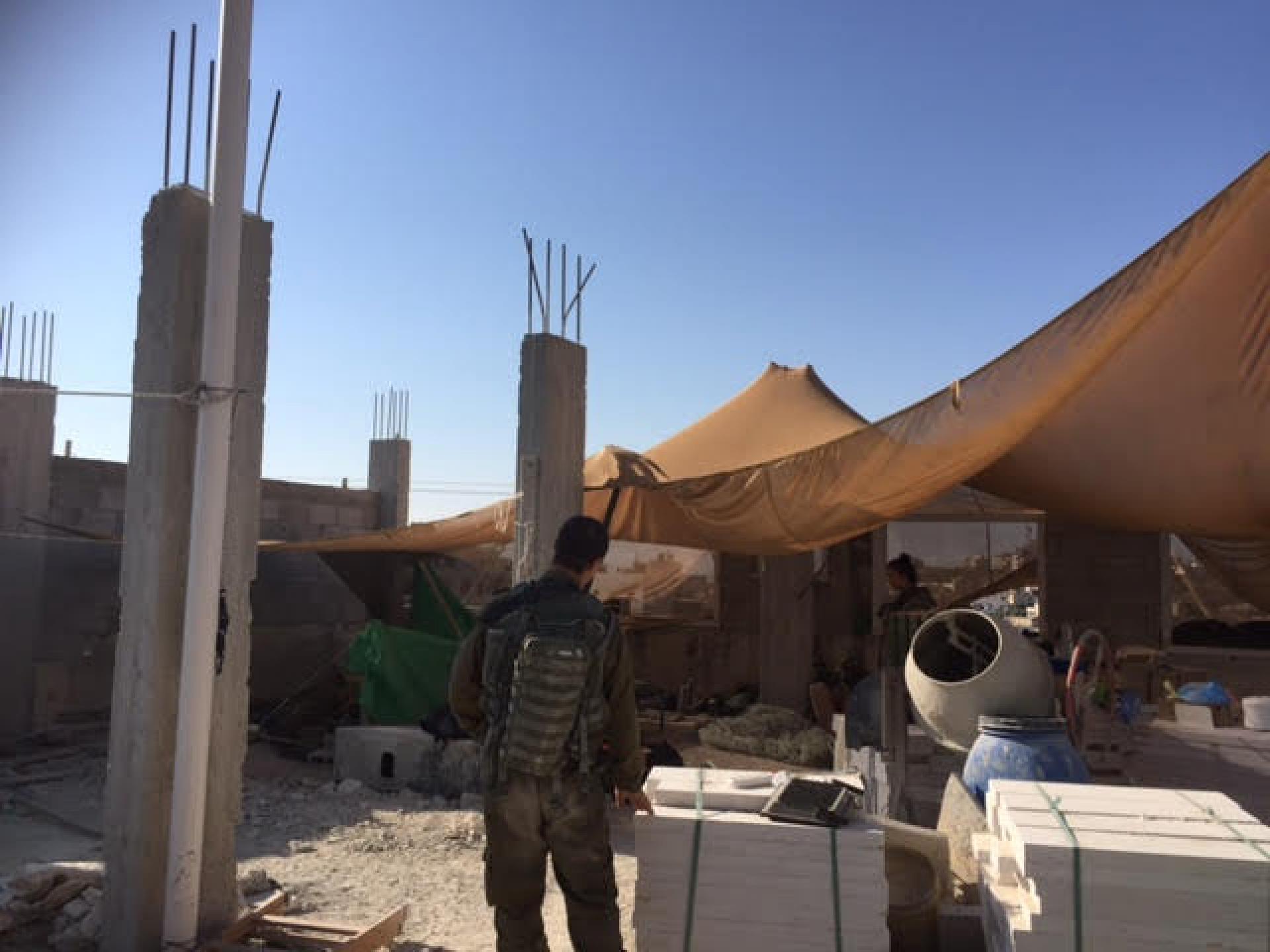 The soldiers on the roof
Photo:
Hagit Back

Khursa is a small village of about 2,500 inhabitants in Area A, on a hill on the way to Negohot settlement.  At the end of September 2017, a pillbox watchtower was set up in the heart of the village, adjacent to the village's diwan, which is a sort of community center for celebrations such as weddings, or used as mourning tent. The army declared the place a closed military zone. In 2018, we saw another aggravation: a barrier of about 50 m, which divides the road into two, and a prohibition on passing vehicles, and then also a prohibition on pedestrians, who have to walk around on a dirt road - during winter on a mud road. Since the checkpoint was established, the army has required special permits to hold an event in Diwan and the permits must be requested at least two days in advance. Of course, the dying are not always cooperative ...

together with the villagers we wondered what the meaning of this strange barrier in Area A, which is supposed to be under full control of the Palestinian Authority. Conclusion: It seems that in order to secure the way to the Negohot,  the residents are forced to live with a closed military zone and a watchtower in the village center, and  suffer many restrictions. (From Watch Checkpoint reports).

Recently, the Israeli authorities began, in the middle of the night, to pave a new bypass road from the nearby village Fuqeiqis to Negohot,  Trying to establish facts and aiming to enlarge the settlement.