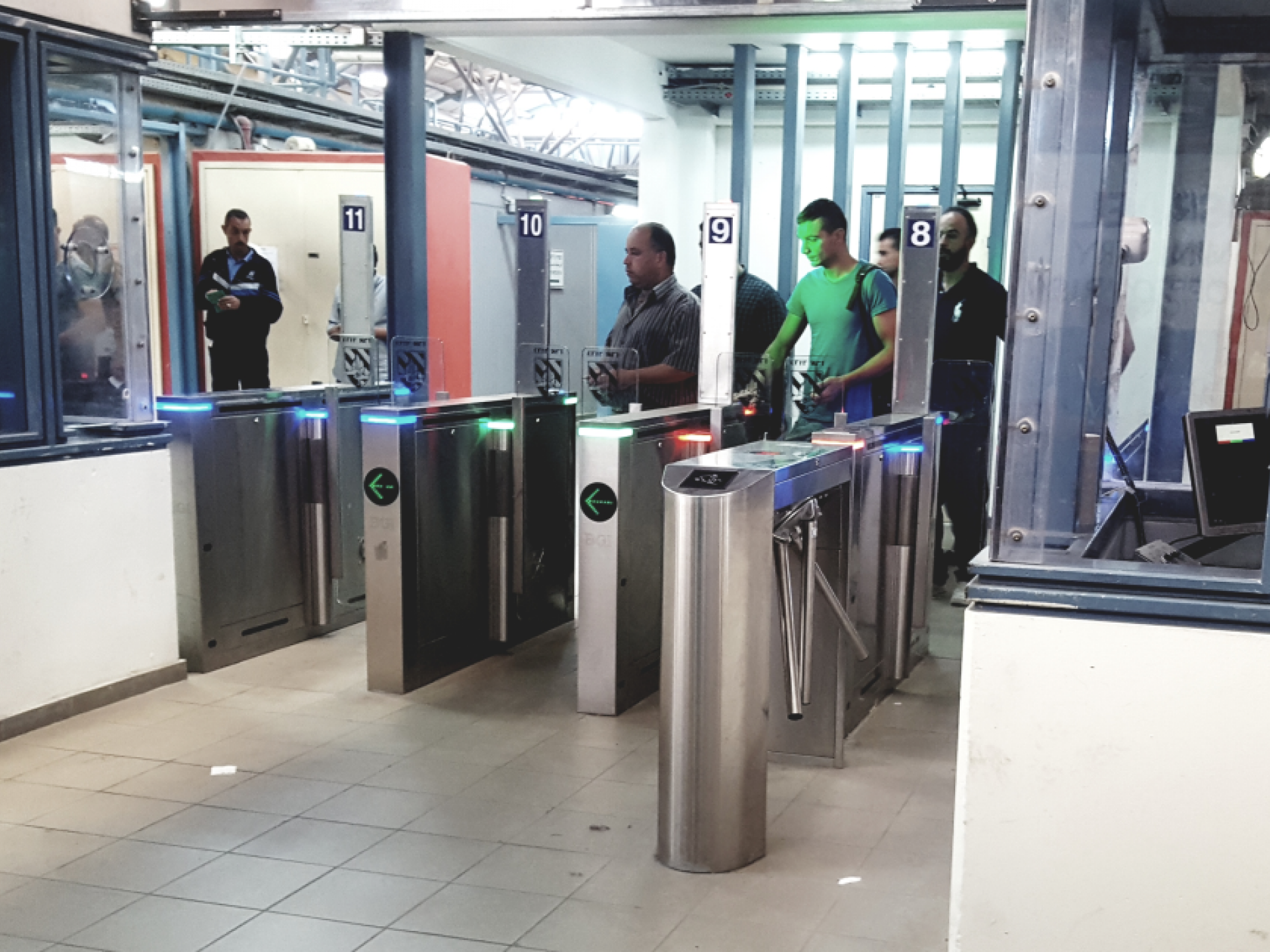 Bethlehem checkpoint, the Israeli side

We arrived along the road from Hebron Road to Ramat Rachel, going toward Tsur Baher, and then at the roundabout toward Armon HaNatziv.  Wayz knows!  It’s an easier drive than through the schools in Jabel Muqaber.  Extensive resurfacing and widening are underway south of the checkpoint, and also along the American road to Silwan and Ras el Amud.  The checkpoint itself is empty at this hour, there’s only one exit door to Jabel Muqaber and one turnstile to Sheikh Sa’ad.  We met a medical student from Al Quds University waiting for a ride to the campus with one of the many makeshift taxis parked beyond the Sheikh Sa’ad checkpoint.  The drivers are young unemployed men who aren’t able to work in Israel.  It’s been a long time since we proceeded uphill, and we returned through the checkpoint.  Even though the crossing to Sheikh Sa’ad is in Area B, under Israeli security control, only residents of Jabel Muqaber and Sheikh Sa’ad are allowed to cross to Israel.  We don’t have time to argue today, or to return through the very distant Zeitim checkpoint.  Later we ask our liaison from the neighborhood committee what’s going on with the southern ring road.  It’s impossibly narrow.  He says they don’t know whether the checkpoint will be moved, and to where.  He expects olive groves to be expropriated on behalf of the Jerusalem municipality’s plan no. 322/157/4.  He sends us photos of the signs posted on the American road and near the checkpoint.  We put him in touch with “Bimkom” – Sherry Kronish and Diana, the field representative – to organize a tour, collect information and help submit objections.

The American road is in need of repair.  The Zeitim settlement in Ras el Amud is growing and expanding.  We were glad to see the settlement near Khalif Hotel still has only one structure.  The once-lovely hotel is now a ruin.  The owner regained it after years of court cases, accompanied by an adjacent separation wall on three sides.

Some young men sit waiting for rides at the Zeitim checkpoint plaza.  They say they have permits for an excursion.  We were pleased.  We learn there’s a power outage at the checkpoint after shouting back and forth to the inspection booth which isn’t responding to those waiting to cross to Azariyya and then to Jerusalem.  Finally a security person arrives and appears to fix the problem by pressing on a remote control device.  The elderly man stuck at the exit crosses on the way to the hospital accompanied by family.

Located adjacent to the Separation Wall ("Jerusalem Wrap") at the north entrance to Bethlehem, this checkpoint cuts off Bethlehem and the entire West Bank from East Jerusalem, with all the serious implications for health services, trade, education, work and the fabric of life. The checkpoint is manned by the Border police and private security companies. It is an extensive infrastructure barrier and is designated as a border terminal, open 24 hours a day for foreign tourists. Israeli passport holders are not allowed to pass to Bethlehem, and Palestinian residents are not allowed to enter Jerusalem, except those with entry permits to Israel and East Jerusalem residents. Israel buses are allowed to travel to Bethlehem only through this checkpoint.
The checkpoint, which demonstrated harsh conditions of crowding and extreme passage delays for years, started employing advanced electronic identification posts has upgraded its gates

It sits on the separation fence south of Abu Dis. The checkpoint is manned by Border Police soldiers and private security companies and operates 24 hours a day. Palestinians are forbidden to go through, other than residents of the Qunbar and Surhi families who live west of the separation fence, some of whom have blue ID cards and others have entry permits to Jerusalem. Other Palestinians, including residents of East Jerusalem, are not permitted through the checkpoint. Visitors to the families are permitted through the checkpoint only after their hosts obtain permits for them at the checkpoint.

One of the major crossings in Jerusalem’s central sector. It is located on the separation fence between the northern portion of the al-Ezariya neighbourhood and the neighbourhood of a-Tur and the rest of East Jerusalem. It is manned by Border Police soldiers and private security companies and operates 24 hours a day. Palestinians are forbidden to go through, other than permanent residents of East Jerusalem (holders of blue ID cards) and holders of work and commercial permits who are allowed through only on foot.