Particularly calm in Qalandiya, less so in Shuafat

On passing through to the Palestinian side at 5.30, we were pleased to see that there were almost no queues. 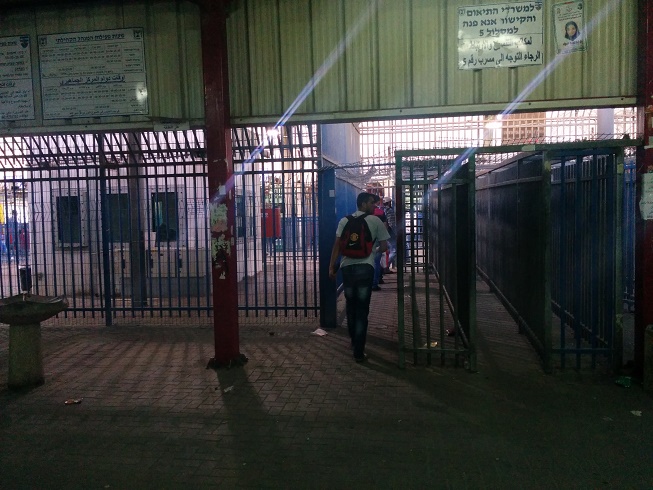 All five checking stations were open and the turnstile in the first lane was left open. and everyone arriving entered directly.

Both the beigel seller and the tea seller in his kiosk, were once again present, after the Ramadan break.

We went outside to show our visitor a view of the refugee camp and the traffic in front of the car checkpoint. When we returned, a policeman had joined the soldier controlling the turnstiles, in her cubicle.

Women used the regular line instead of waiting for the humanitarian gate to open.

We decided to take our visitor to Shuafat (Anata).First crossing back by foot to the Israeli side where we had parked, we drove through the checkpoint to the Palestinian side, and drove past A-Ram and Hizme towards Jerusalem via Pisgat Zeev. Because of the summer vacation ,there was little traffic.

We parked near Anata checkpoint.  Our visitor photographed the wall both from the outside and then inside when we entered. 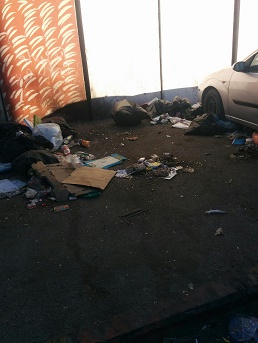 Refuse is piled up all over. Because of the school vacation the parking lot where school buses usually collect schoolchildren, is empty and locked.  On the other hand, the car traffic is heavy with irritable drivers  We continued a bit inside for our visitor to see conditions.  On the way out we met the indefatigable Jamil Sanduka.  Even without the schoolchildren, he is present, with another man.

At about 7 o’clock we approached the pedestrian checkpoint.  There were only a few people. At first it looked as if two stations were open – an exceedingly rare occurrence – and that the second station where there is not an x-ray machine was open for people without packages . But it soon transpired that this was closed and the few people who had been waiting there joined our line.  Here we were admitted through the turnstile one by one. As we were only a few people, this was not the usual slow process. As we left, we wanted to show our visitor the car checkpoint from close, but the Border Police waved us on.

As we had ended our shift so early, we took our visitor to see the view from Mount Scopus, looking east towards Issawiya and the Shuafat refugee camp that we had come from, and west towards the Old City and West Jerusalem.

Later we heard that that same morning there had been an ‘incident’ at Shuafat checkpoint, which ended with a Palestinian being “neutralized” (still alive, according to the report.).