A long, heavy morning at Qalandiya.

6.00  When we arrived there were a number of police cars in the bus parking lot on the Israeli side and they were taking everything inside the car out. A Palestinian told us that it had been a stolen vehicle and the culprits had been caught. 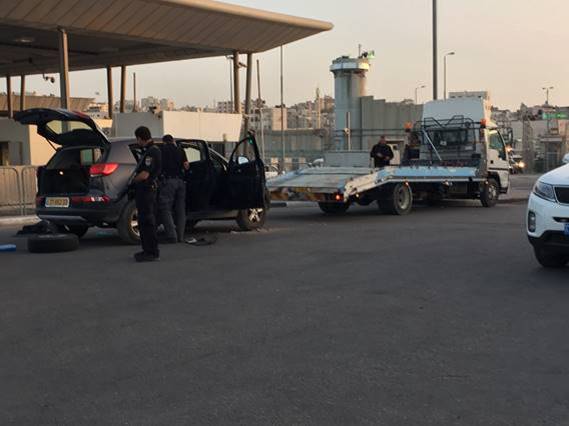 06.00. We arrived late this morning, owing to a number of mishaps, to find long lines stretching to the very far end of the parking lot. 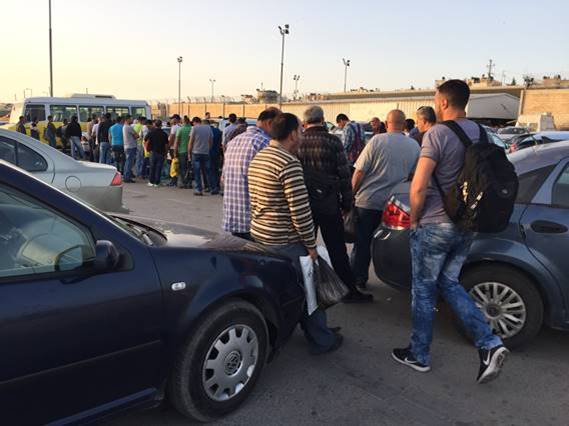 All five checking stations were open, but there were only short queues at each one. At that moment there was a ‘change of guard’ in the cubicle, and we asked the replacement soldier to allow more people in at each opening of the turnstiles. She answered that people ‘,should wait patiently,’ but we did notice that she did in fact open the turnstiles for reasonably long times.

However, there was such pressure that at 6.25 the lines collapsed completely and it took more than half-an-hour before there was relative order again. Then again the lines were long, reaching beyond the shed itself.

06.08. Two D.C.O. officers arrived.  They stood chatting, although there were already people waiting at the humanitarian gate.   We asked at 6.15 why they hadn’t yet opened the gate, one replied that they were waiting for a security guard ‘so that they wouldn’t be stabbed.’  While one watched the people with no expression on his face and calmly went on drinking his coffee.

A minute later a guard did arrive (in addition to the police woman), and they then opened the gate. (The guard was not close to them and spent part of the time in the cubicle, so it is unclear how much protection he could have given!)

The D.C.O. officers dealt quietly and courteously with people at the gate – but strictly. Older folk without permits who are allowed in only after 8 a.m. often try their luck by joining the regular lines, and succeed. When the lines collapse, as today, they can’t do so and then try to pass through the humanitarian gate (in fact, many believe that the gate is for their benefit), but they were all turned back.

The soldiers left the humanitarian gate at 7.30, which is later than usual, and this did help women who couldn’t cope with the crush at the entrance to the cages. About 10 minutes later, a man arrived in a wheelchair and the policewoman arranged for him and his escort to pass through, though she turned back all others.

08.05. At last the lines were almost contained within the cages, so we joined one.  It took about 20 minutes to cross through.