Awarta  is a village of 7500 to 8000 people who belong to five families. It is east of Huwarra and south east of Nablus in the Nablus governorate. The Itamar settlement and some outposts are spread along the high ridge of hills above the village. We spoke with A., a member of the village Council.

Education: There are four schools in the village; two are for boys and two for girls. They are building a new school, which will be mixed – both for boys and for girls – from elementary first grade through eighth grade. In  Beita village, on the western side of Huwarra, there is an industrial (vocational) high school that is also mixed. Some pupils from Awarta  attend that high school, but there is no bus. Unfortunately, in after school hours, there are no organized activities for children and youth.

As it is too close to Itamar, there are neither parks nor nature reserves. On the contrary, settlers plan to turn village lands into a nature reserve for themselves only. Access to them is already limited, as we shall see.

Women’s Organization: There was a women’s organization but it is no longer active, due to lack of funds to run workshops or other activities.

Medical Services:  The village clinic has a nurse, but a doctor only twice a week. For more medical care, villagers go to Huwarra or Nablus.

Employment: Many villagers have permits to work in Israel. Agriculture is also an important source of income. Many women work as teachers, secretaries and nurses. Only few people have gone abroad to make a living.

Water: A large reservoir of water near Rujeib,and not far from Awarta, is used by 12 villages. Many homes have indoor wells. The village receives its running water from Ramallah. As elsewhere, in winter it is enough, but in summer, water is scarce. They buy expensive bottled water from tanks.

Sewage: The settlements, especially Itamar, shamelessly dump their sewage right over Awarta’s olive trees. This pollutes their land and can seep into the underground water. Council members have appealed to the DCO to have this destructive dumping stop—but it has been ignored.

Our Conflict: When we asked A, how he saw a solution to our conflict, his only answer was “INSCHALA” (God will help).

Problems: EXPROPRIATION OF LAND. Some village farmers own 7000 dunams of land near the settlements. (This does not include the thousands of dunams seized when the settlements were set up on land owned by villagers.) Most of this land is planted as olive groves. The farmers who own it must[1]  have permits to go to their own land. They are allowed two weeks a year; one week in the spring to work the land and clean out weeds, and one week in the fall to harvest the olives. Now that the harvest is over, they can not go back to their land till spring.
Helplessly, they see settlers sending out their cows, goats and sheep every day to graze in their olive groves!

Vandalizing with Cows. All these herbivores eat the leaves on olive trees. This will seriously affect the next harvest: no olives grow on leafless trees. It will take one to two years for leaves to grow back on such trees. Council members took pictures and videos of cows and sheep grazing in the groves (and kindly sent them to us); showing them to the Civil Administration DCO, they complained and demanded that this vandalism be stopped, and no animals

be allowed to enter their olive groves.

But nothing has come of their appeal to the DCO as we saw for ourselves.

After our visit to the council, a farmer and another man drove with us to a large area near Itamar which this farmer cannot enter till spring . We were on a dirt path—the closest we could get to the olive groves. The photos we took from afar of the brown animals moving among the trees are less clear than those sent us. As we looked at the cows, a white car with the words ‘Security for Itamar ‘ on it drove up opposite to us and some men, including 2 armed soldiers, got out; a settler approached and looked closely at us. Then a white jeep  also came up near us; soldiers got out and watched us. Obviously, we were very suspicious characters! So we went back to our car and drove away.

Yet another strategy to violate Palestinians’ right to possess land and work it—a strategy  which probably aims to dispossess Awartans and help settlers grab this fertile land and turn it into a nature reserve for their own exclusive use.

In the picture: Cows from Itamar eating tree leaves in Awarta olive grove, video taken by a council member, January 2020. 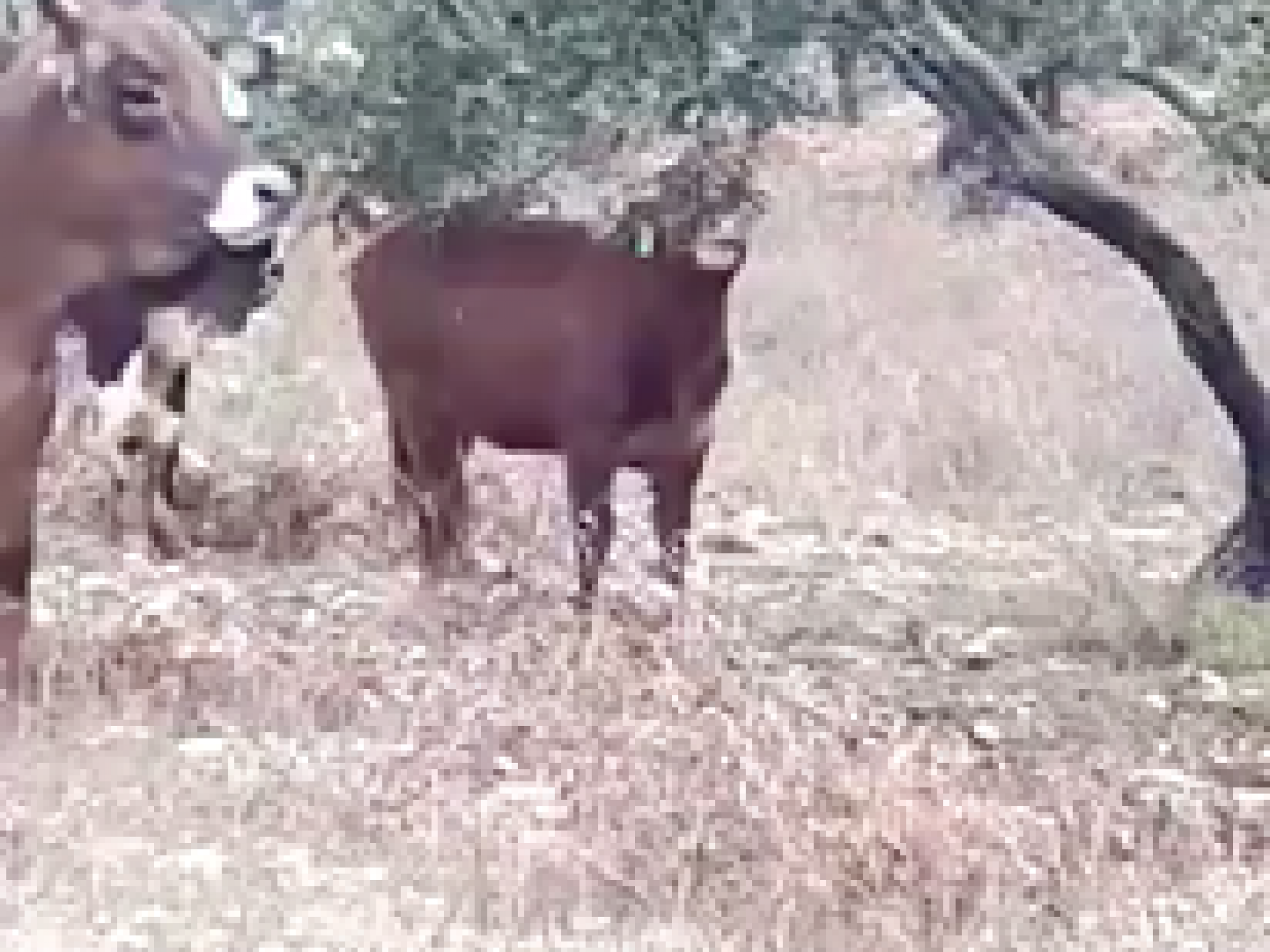 Cows in the olive grove