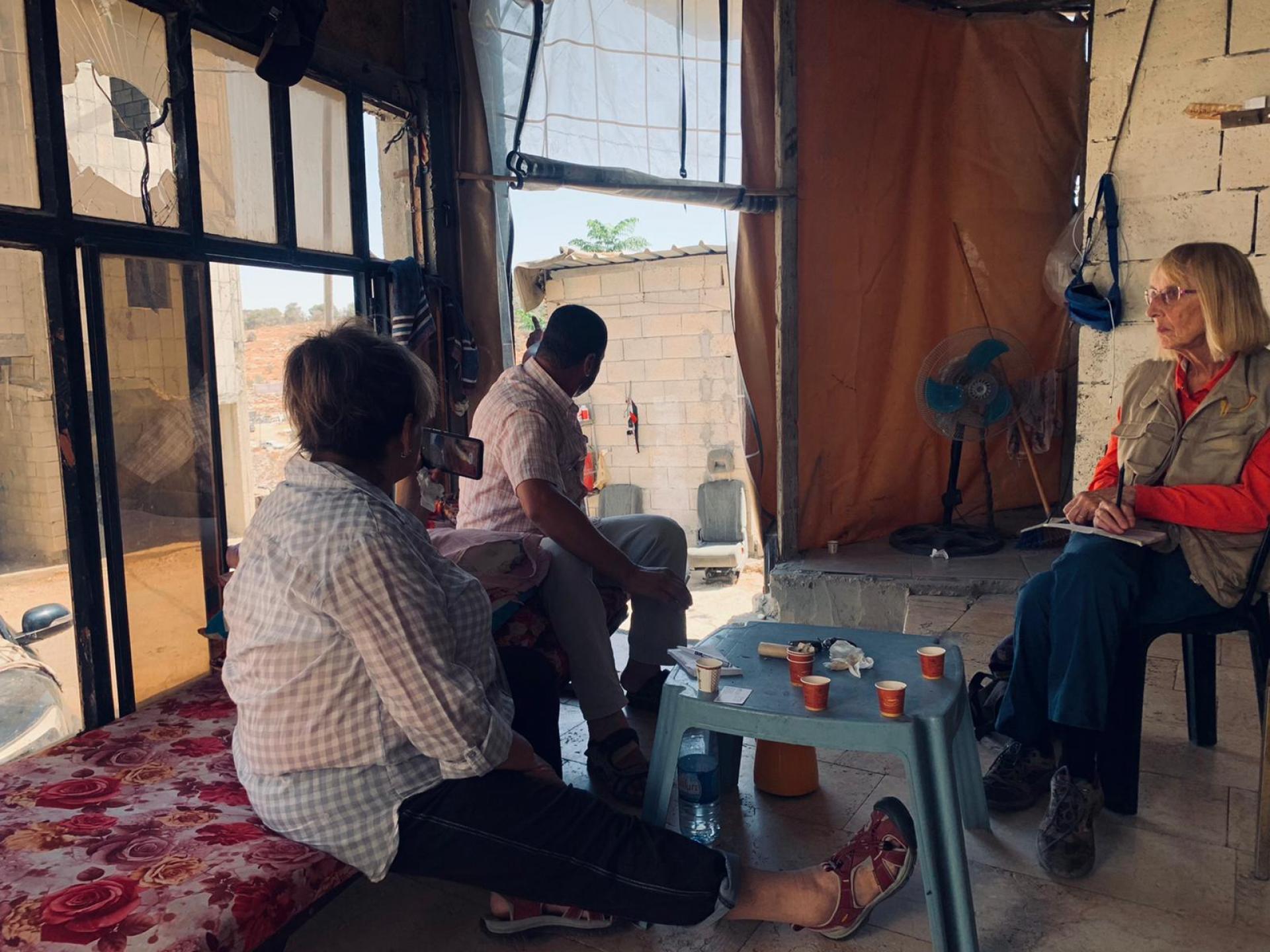 After what happened there last night -- the incident with an At-tuwani resident who was attacked by a settler from Havat Maon (Maon Farm), and who himself ended up being arrested and charged with attempted murder -- we went to see and hear exactly what had happened.

Everything is quiet on the way until you reach the entrance to the village. An officer and a soldier at the checkpoint which they set up, want to know who we are and what the purpose of our coming is. Asking for our documents. Opening and closing the trunk.

When we left, the shift changed, and they again ask for documents and also photograph them.

In Nasser's house there are three volunteers of the organization of churches, with their vests and a dove painted on them. One from Sweden, one from Norway and one from England. They are happy to meet us, and happy to hear about us firsthand.

I recorded Nasser but it is a very long and heavy tape and cannot be given here.

He told exactly what Rachel Afek heard from another friend.

"In the late afternoon, two settlers from Ma'on Farm came to the land of a farmer, a shepherd, a Palestinian from At-tuwani, equipped with iron tools, etc., and ordered him to leave. He told them that this was his land. A violent fight started between them, when one - the settler was armed with an iron tool, and the other - a resident of At-tuwani, empty-handed. Then more settlers arrived from the illegal farm, by car and on foot, and continued the fight with the shepherd who was grazing on his land. Then they started shooting in the air and apparently called in the army. Both parties involved were injured.

The army arrived. The wounded Palestinian was put on a Palestinian ambulance, but his wheels were punctured by the settlers, and the army dragged him to an Israeli ambulance that brought him to Soroka hospital. The settler who started the fight was also injured - and all the media were talking about him - attempted murder, no less!

Many armed forces arrived in the area, by car and on foot, entered the village. They went up on the roofs, fired sound and gas bombs towards the houses of the village, to such an extent that the gas entered every house and the entire area.

After that, they started entering houses to look for wanted persons, even though the direct confrontation had already ended at the beginning of the evening with two wounded.

The soldiers went from house to house, took out about 15 young people (Shabab) to a concentration place in the village and interrogated them. Two of the subjects were taken away and their whereabouts are still unknown. The whole thing continued until after two in the morning, when the residents found themselves with severe breathing problems, frightened and suffering children, and the inability to call for help.

The village was surrounded by the army all night, and until ten in the morning no one could enter or exit.

Nasser also says that the wounded Hafez, whose lands were invaded by the settlers, was also taken from Soroka Hospital for questioning. He repeats and mentions the redhead from the Havat Maon, who regularly makes their lives miserable, and is the one who started to fire yesterday.

There is tense silence now. In another video, Havat Maon can be seen on the hill above the village, and next to it, further on, the Maon settlement that is growing and growing, and its houses are almost touching the houses of the village of At-tuwani.

Khalet Al Daba’: There is an evacuation order on 29.9 for all residents of the village.

We will have to prepare for it.