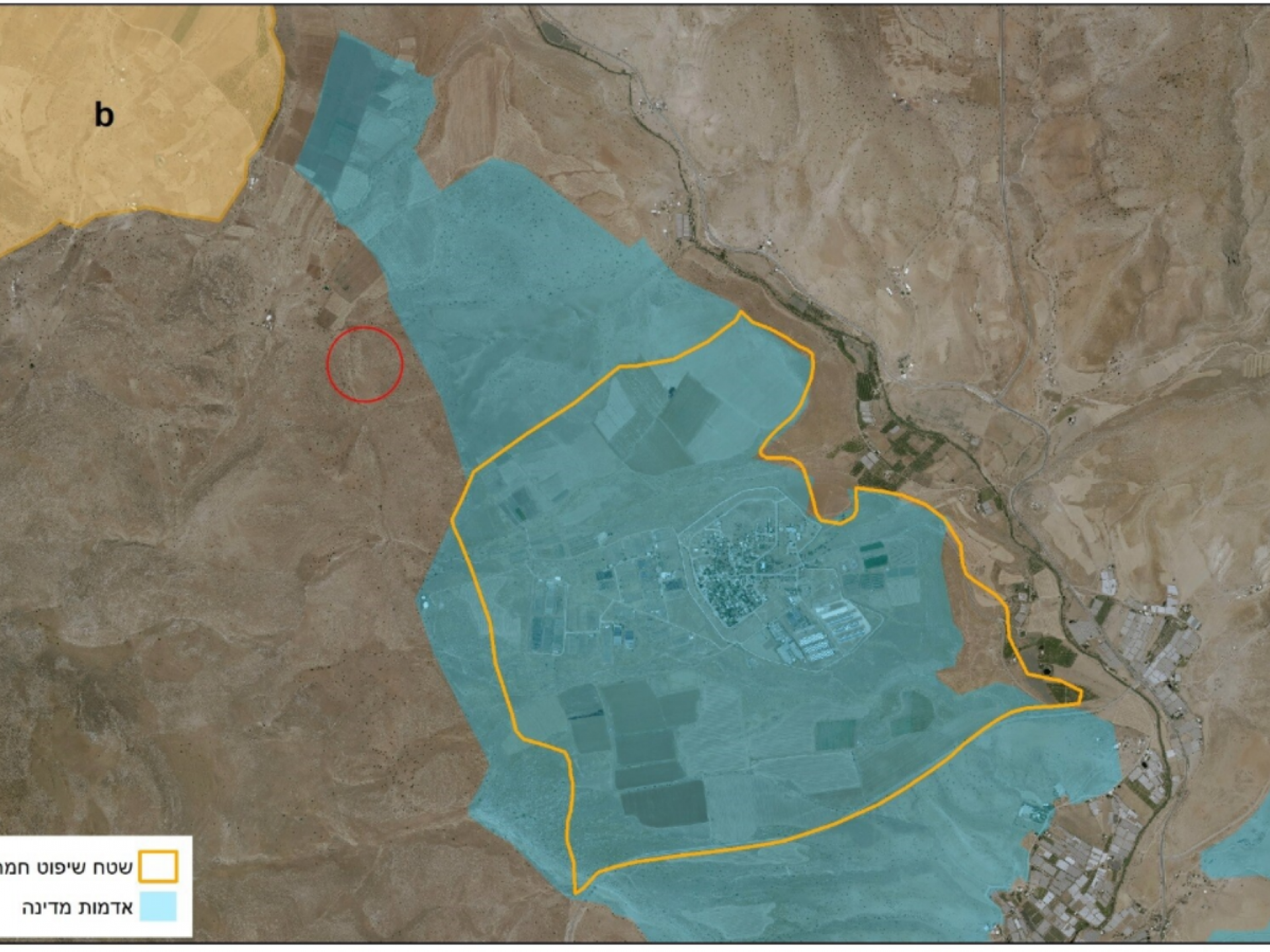 Jordan Valley: The jurisdiction of the Hamra settlement according to an aerial photograph 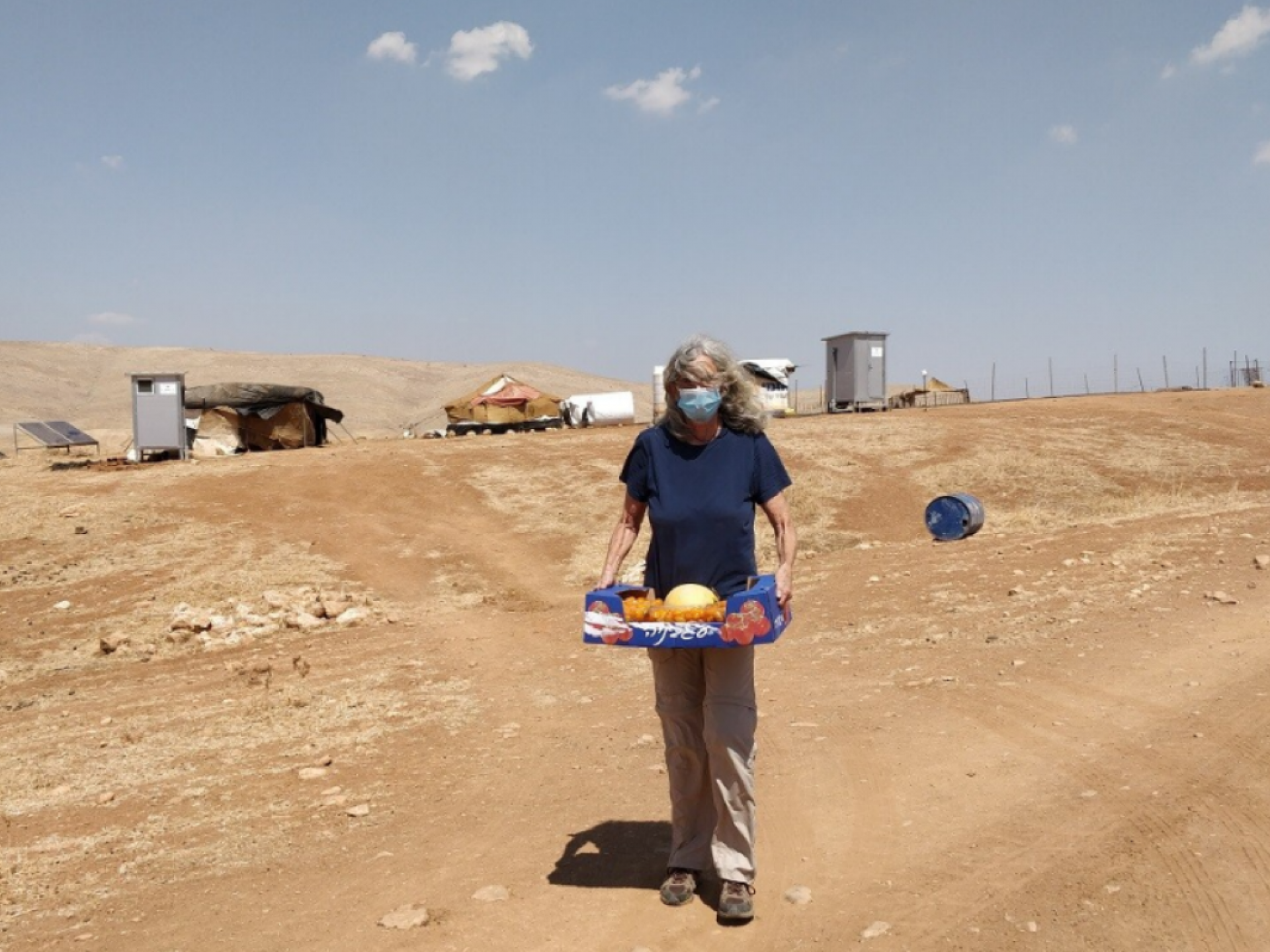 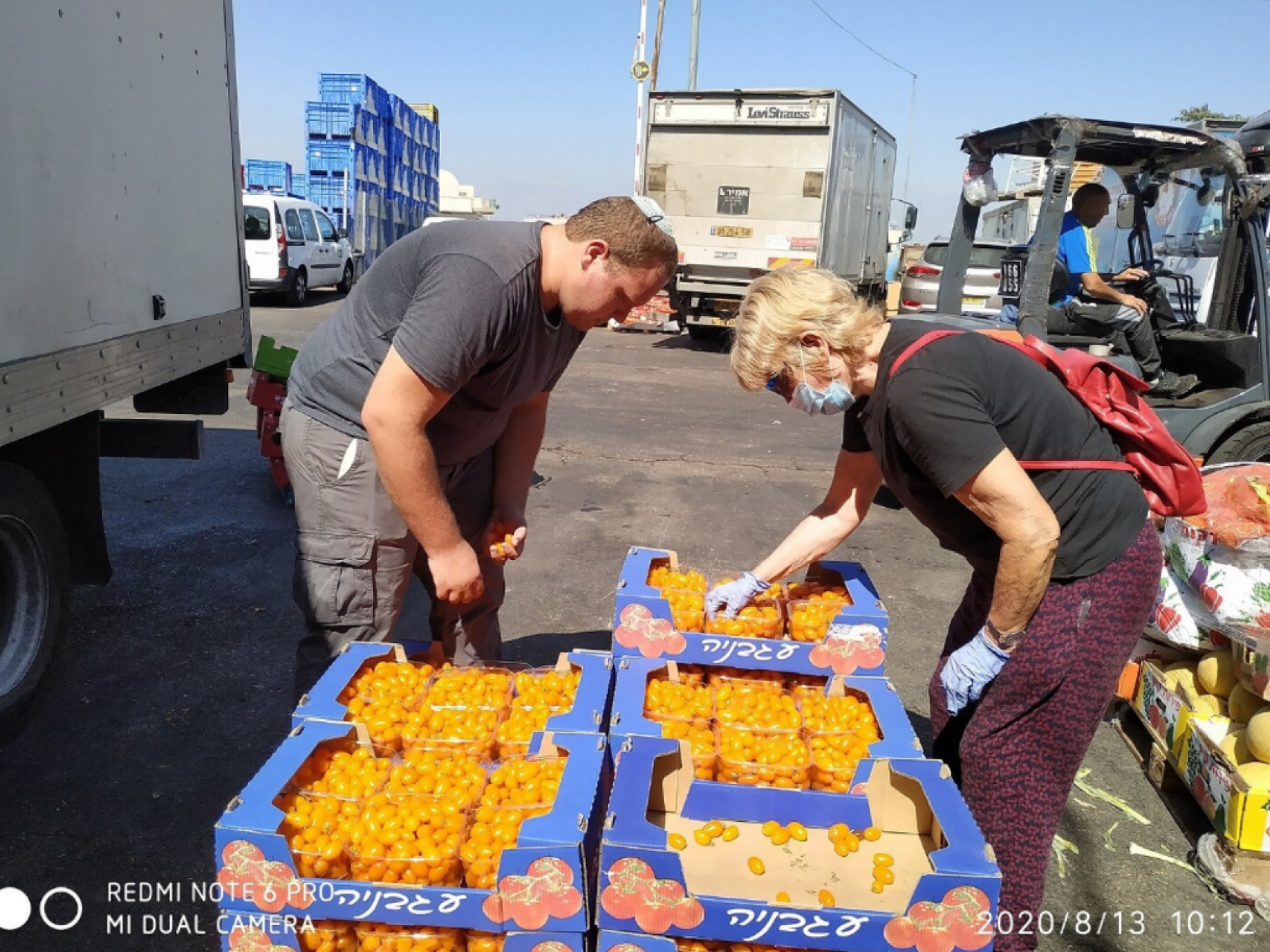 We purchased the dry goods (flour, sugar, rice, lentils, salt) two days earlier and sent them with Rachel Afek who drove to the Palestinian Jordan Valley to put up – together with Mahdi – a kindergarten near Hamam Al Malih. She left the food for us with Rima in Makhoul – thanks to which we got a wonderful eggplant and goat-milk yoghurt dish from her, as we arrived just as she was cooking…

Early in the morning we drove to Jerusalem’s wholesale vegetable market and rummaged around crates of vegetables and fruit in order to fish out whatever was still edible. We loaded my car with crates of carrots, green, yellow and red peppers, eggplants, cabbage, onions, sherry tomatoes, melons, plums and more. Again, we felt our deep appreciation of Daniela and her “Coming to Market” association, and of all the young volunteers who come there several times a week to sort out food and bring it to populations in need – Jews and Arabs, asylum seekers and Holocaust survivors. We were literally the tribe elders…

This time we focused on the arid, barely accessible area of Khirbet Homsa Al Foqa. We reached the furthest community and proceeded from there on. Near one of the communities I ran my new car accidentally over a small rock, and in addition to the damage done (the right headlight was left hanging on its wire…) we couldn’t manage to get the car off the rock. We had to unload all the crates (about 150 kilos) until we finally succeeded. Unfortunately, we didn’t make it to everyone for we also had to reach the shepherds near Hamra whom we had promised to meet in order to check out the possibilities of accompanying shepherds to grazing grounds.

daughter was killed a year ago and whose wife was seriously injured in a road accident following their nighttime-eviction from Al Hadidiya), to several families at Ras Al Ahmar as well as to Makhoul (for the second time). All in all we manage to bring food to 14 families.

In the afternoon we set out to meet a shepherd whom a settler-colonist has been harassing lately, injuring his sheep and threatening the shepherds in an area west of Hamra Checkpoint in Area B, adjacent to the settler-colony of Hamra. In order to get to the site one must cross a spring (En Shibli) and I feared getting stuck in the stream. We were therefore forced to cross the town of Nasariya, in Area B, whose inhabitants stared at us with wonder. It’s not a common sight, seeing Jews inside this town, as it is very distant from the checkpoint separating the Jordan Valley from the Central West Bank, even if the checkpoint is usually unmanned. Apparently, there is a clear distinction between the fertile valley, in the jurisdiction area of settler-colony Hamra (several times larger than the actual colony, including the colony’s fields) and the more arid hill area where Palestinian graze their flocks, outside the jurisdiction area, not even included in state-land.  So far no friction was known to occur between Palestinian shepherds and the settler-colonists, until a new guy came to town about two months ago – a new settler-colonist who set up a sheep ranch and began to violently remove Palestinian shepherds from their own grazing grounds. The military security coordinator of Hamra who came to the site has refused to intervene, and so did the police whom we summoned. They admit that there is no excuse for forbidding Palestinians to graze there, not even by the occupier’s apartheid laws, but it’s not their job to protect Palestinians… Since the settler-colonist is armed, he may do as he pleases! This is a process that has been taking place in recent years in many sites of the Palestinian Jordan Valley – settler-colonies that were established by the Israeli Labor Party regime and were not violent are now absorbing new members who erect sheep and cattle ranches and whose sole purpose is to dispossess and expel Palestinians from their own lands! We, the group accompanying Palestinian shepherds in the Jordan Valley, shall do out best to force the Israeli police and army to intervene. 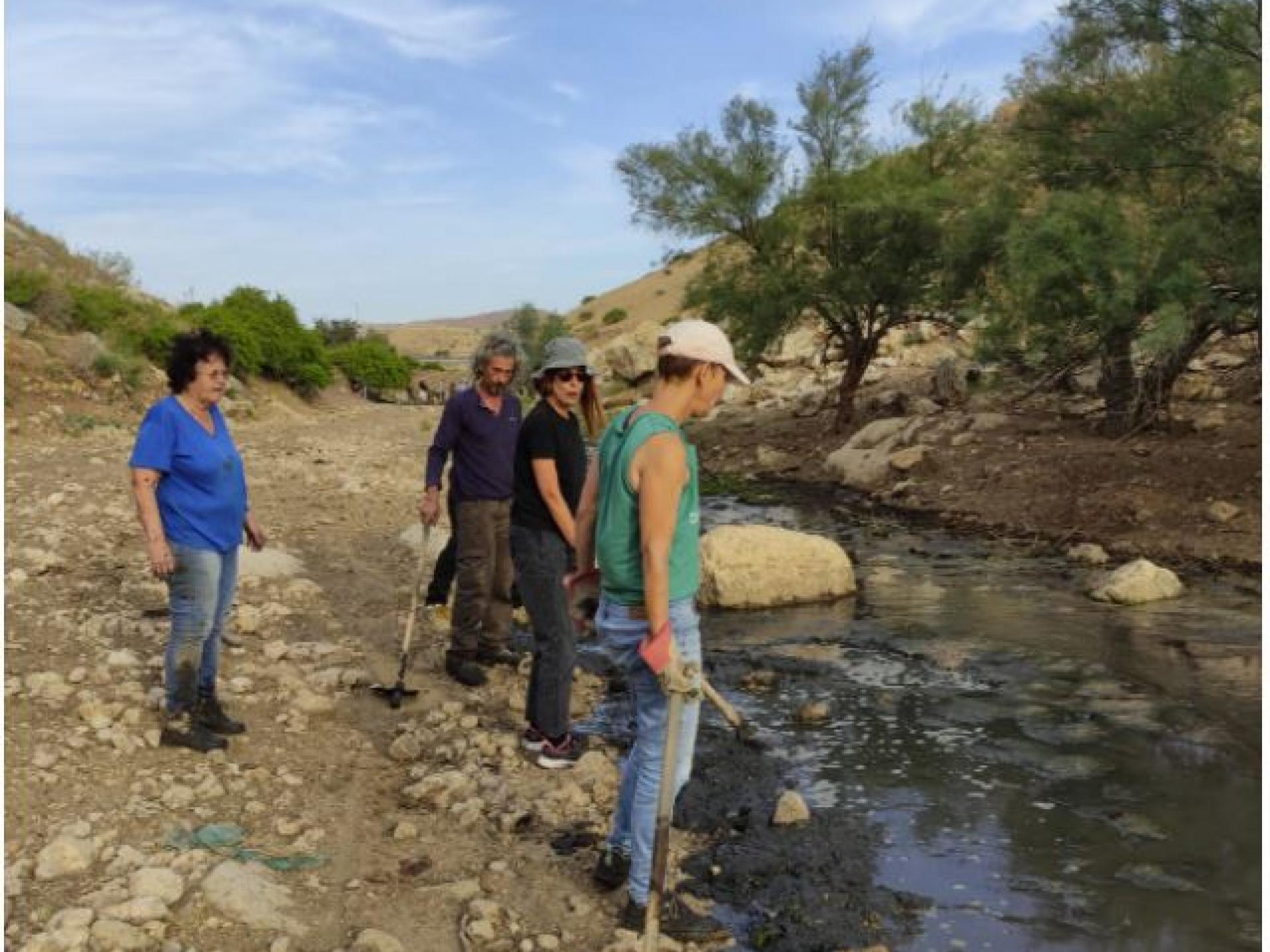