05.15.  Dark and cold. Again there are groups huddled around little fires. As we approached the checkpoint we met a stream of people coming out. We took this as a good sign. On the Palestinian side there were no queues. Five checking stations were open with a few people in front of them. The beigel-seller was present, as well as the new falafel stand (which fortunately has lately been doing its frying outside), but the usual kiosk outside was absent.

The soldier in the aquarium opened the turnstiles every time a few people gathered. At first he opened only the first one, near his cubicle, but when more people began to arrive, he opened all three, and sometimes they were left open. Checking in the stations seemed to be rapid. At about 6, a policeman arrived; women and others entitled to use the humanitarian gate did not wait, and simply joined the regular line.

This is how it looked at about 6 o’clock after the turnstiles opened – empty. 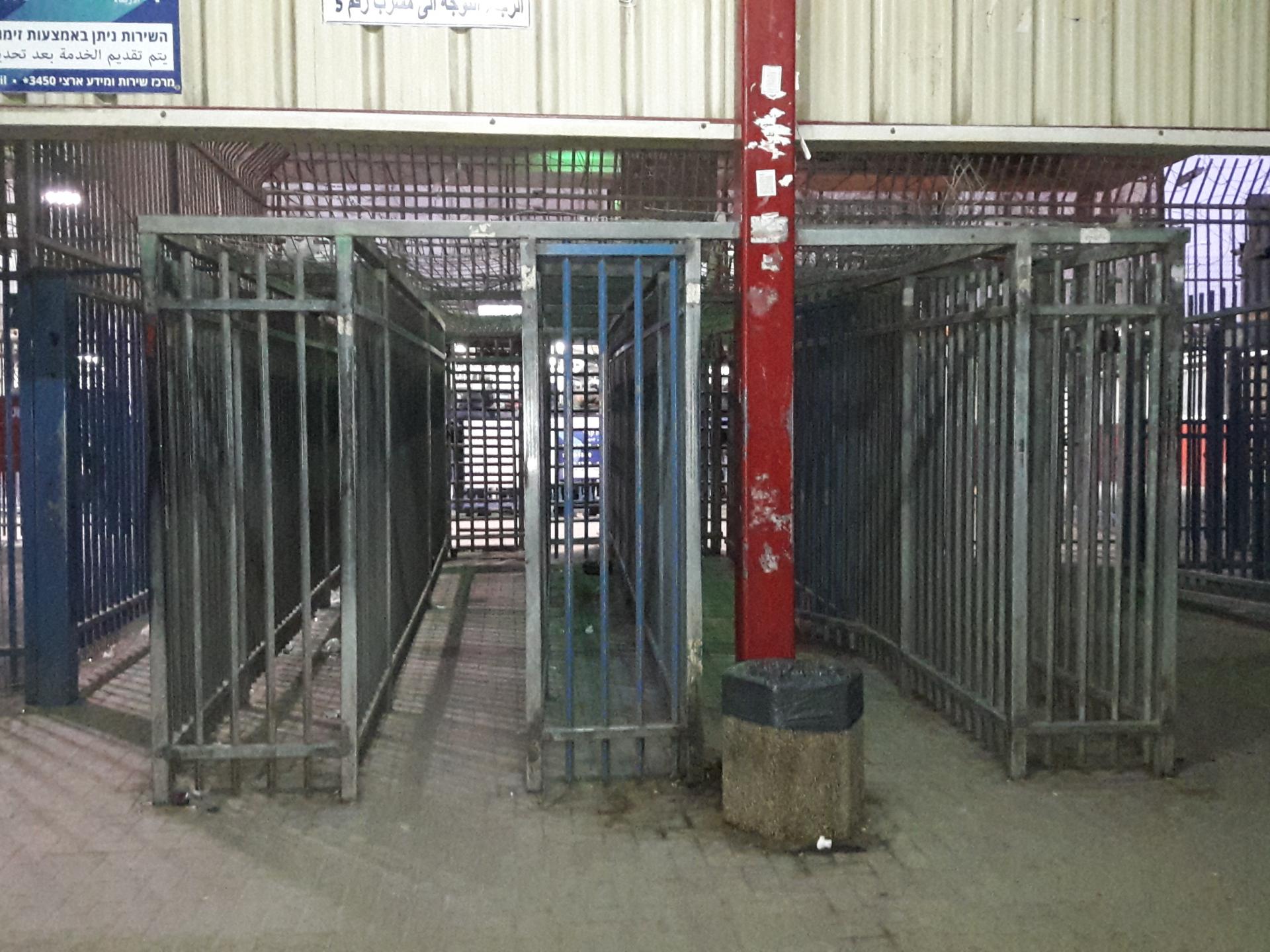 No people at the entrance to the checkpoint
Photographer:
Ronit Dahan-Ramati

We wondered if there were fewer people because of checkpoints on roads and the impossibility of leaving certain places.

After 6, the humanitarian gate did not open, but there was no need – until an elderly woman arrived in a wheelchair. With perfect timing, at that moment a  D.C.O. officer arrived. After checking her documents and of those accompanying her, he and the policeman opened the humanitarian gate and the  gate next to the turnstile. The soldier went with them to help through  further gates

We went outside to see any developments there. Before we went outside we heard loud voices in the cages and thought this was just a loud conversation. When we returned we saw a policeman at one of the checking stations talking to one of the people. Apparently a little fight had developed in the line. The soldier joined him and they went to the neighbouring checking station from which two women emerged, one of them began shouting and once again there was a shouting match.We noticed our friend, a teacher (a gentle person with whom we chat in German), apparently explaining to the soldier and policeman what had happened. In the end things calmed down, the teacher and two women joined one line, while the policeman accompanied the man (who was apparently the cause of the trouble) to another, and with the soldier returned to their sterile

place. We asked the policeman what had happened. He said ‘it was mutual. He pushed her, she pushed him, in the end no one was guilty ..” We were happy that ‘our forces’ worked to calm matters and not to punish.

At 6.30 we joined a short line. As we passed the turnstiles remained open. At the checking stations they let in 5 people at a time. After putting packages on the screening machine one approaches the check individually. (There are two soldiers at each – one checks the screening machine while the other checks documents against the computer. The soldiers sit in a reinforced concrete room, with security windows. In checking stations 1-2, and 3-4, are four soldiers sitting back-to-back in the same room, two serving each station.) After all five have passed there is a final turnstile which then is opened, releasing one to a corridor which has a final, always open turnstile to the road.

We chose station no.3. We were admitted in a group of five. In front of us were a man and a woman, and there was one woman behind us. The woman soldier waved us through. While we were waiting with the man and the first woman at the still-closed turnstile, we were called back. A soldier who was in fact manning staion no.4 had decided to call us back. He ‘had to check something on the telephone.’ “You’re smiling, hey?” The woman soldier asks “what’s your problem?” He continues unconcerned. Meanwhile checking at both stations are held up. People waiting in line become impatient. We asked that at least the Palestinians waiting in line be allowed to pass while we wait, but in vain. Luckily all this did not take much time and , in spite of this delay, we passed within 15 minutes.