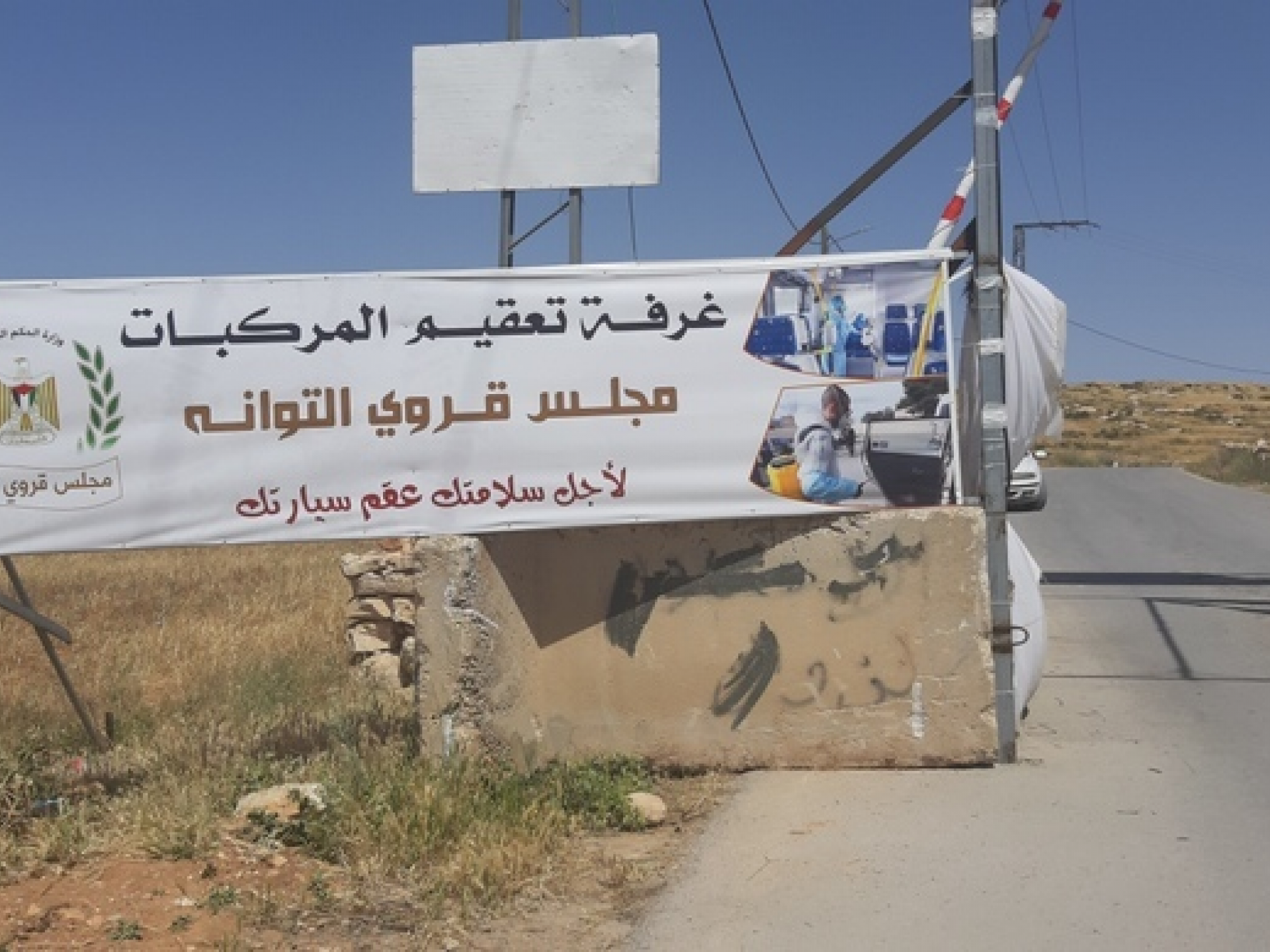 Disinfection station for your health 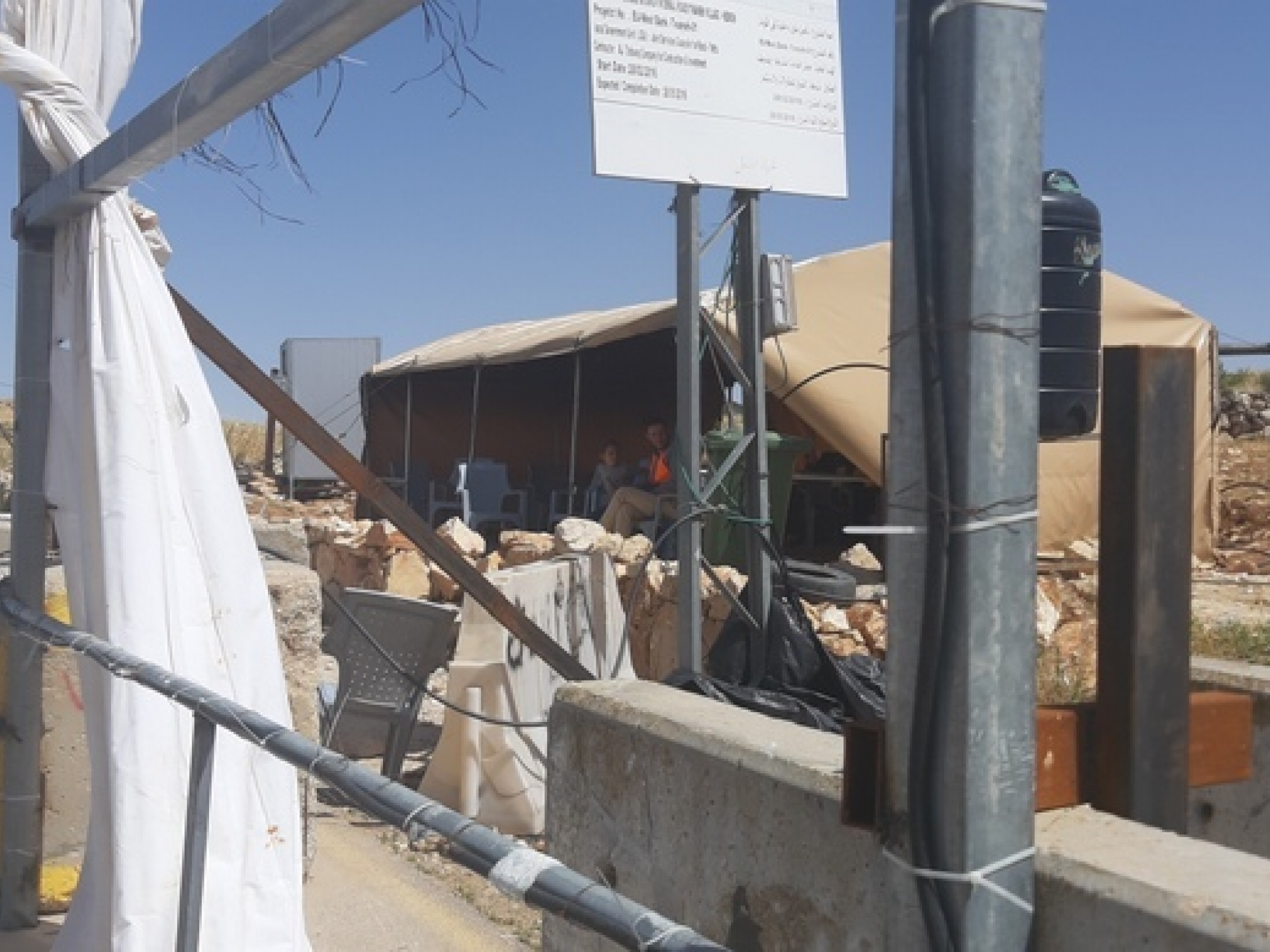 A shed at the entrance to a-Tuwani

Yesterday evening Nasser Adara from Tuwani phoned and asked us to come. We arranged to meet him at the entrance to the village. The villagers  are strict, only the local residents now enter.

At the Meitar checkpoint, every vehicle is stopped, but the soldiers just looked and motioned us on.

When we arrived,  Nasser and his son, Basel were waiting for us at the gate. (Basel occasionally sends us photos depicting the unpleasant events between them and the settlers and the army and  will continue to do so).

A huge  sign at the entrance, on the left. On the right is a large shed. The sign reads: "the Tuwani  Council. Disinfectant area for your health”.

Both are  in gloves and mask. They say it is they who have organized this and they are careful. There are no sick people. Everything is still closed by order of the PA. Workers who work in Israel stay for a month at their place of work and then come home for a few days and return. Maon settlers continue in their usual unpleasant ways. Basel says that 3 days ago they stole the forage which  they had collected as feed for the livestock. And a few days earlier, 2 sheep were stolen.

The police? Yes they come to record details and then go off without doing anything

Nasser asks that we stay in touch and come visit all the time. We promised to do so. We'll keep meeting outside the village until the corona passes.

We continued on Route 317.  Quiet and desolate at all the entrances to villages. Yatta is open.

When we went on to Highway 60 it  is much busier. Here, too, there are no barricades today at Dura al Fawwar and at the entrances to Dahariya and Samoa.

We went into Simia to ask how they were doing. Farhan Salmin of the Combatants for Peace was waiting for us. Everything  here is like everywhere on  the West Bank. They live according to the orders of the Palestinian Ministry of Health.

Remember, there was also a Tahadi Initiative = Challenge. Schools  were established despite the prohibitions so as to ensure the children's peace and to stop walking on dangerous busy roads every morning for 5,6 km. There too is Tahadi  (goal) 13. The fact that the schools are continuously closed by the Israelis is to them a challenge to continue. The school was twice destroyed and they stood steadfast and continued to build. We visited them at the time when the kids were in the  tents and reported on this. Farhan says they built  the school on a third site which they  cultivated and now there is grass and a garden, but the the corona crisis broke out. Now the kids will be on vacation by August.

From the road, we also saw a Palestinian Health Ministry sign marking a checkpoint for the checking of people at the entrance to Samoa. There, too, they check and only the townspeople are allowed in.  Mohammad says that this is the case in every town, the farthest entrance from the road is controlled and monitored.

Back at Meitar checkpoint, we were  asked with a smile where we came from and insist, as always, to check only Muhammad's blue ID.