A rainy morning at Qalandiya; queues in a ‘reasonable’ state.

05.15. Winter morning. On the side of the road, a group of people warming themselves round a fire. Entering the checkpoint on the Israeli side, as usual, we passed a large group praying.  Inside the checkpoint we found queues that were already extending beyond the shed. When the turnstiles opened the lines came within the shed, but were quickly joined by more people and once again stretched out towards the parking lot.  All the checking stations were open.

We chatted with H., an acquaintance from Bidu, who works in Mahane Yehuda. His nearest checkpoint is at Jib, but there only residents of Jib who are on the list are allowed to pass. On the way back, they are allowed through without checking. Last week there was a new commander in charge who did not allow people not on the list to return to the West Bank. H. tried to convince him that his car was parked just on the other side of the fence and that he had to reach it.  Otherwise he would have to return by bus to the central bus station, then a bus to Qalandiya, and from Qalandiya to Jib via the West Bank. The officer did not relent, so H. and his friends waited until he left, and then passed…  H. explained that the soldiers arrived specifically at the exit so as to catch those refused permits by Security, who return home that way. H. and his friends explained to them that there was no point in waiting there, because the rumour spreads very quickly and those refused permits already know that today there is checking and don’t come. (Memories of Ha-Gashash Ha-Hiver???)

Towards 6 o’clock it started to rain, at first a drizzle then heavily.  People tried to squeeze in their lines into the shed.  The soldier in the aquarium tried to let in many people at each opening of the turnstiles, so that the lines could be kept much shorter. Shortly after 6, a guard arrived and then a soldier to relieve the one on duty. At 6.15 the D.C.O. officer arrived, followed by a policeman. She opened the Humanitarian gate and the checking there seemed to be relatively generous today.  There is a new notice on the gate (see photograph) giving details of who are, or not allowed through the gate. 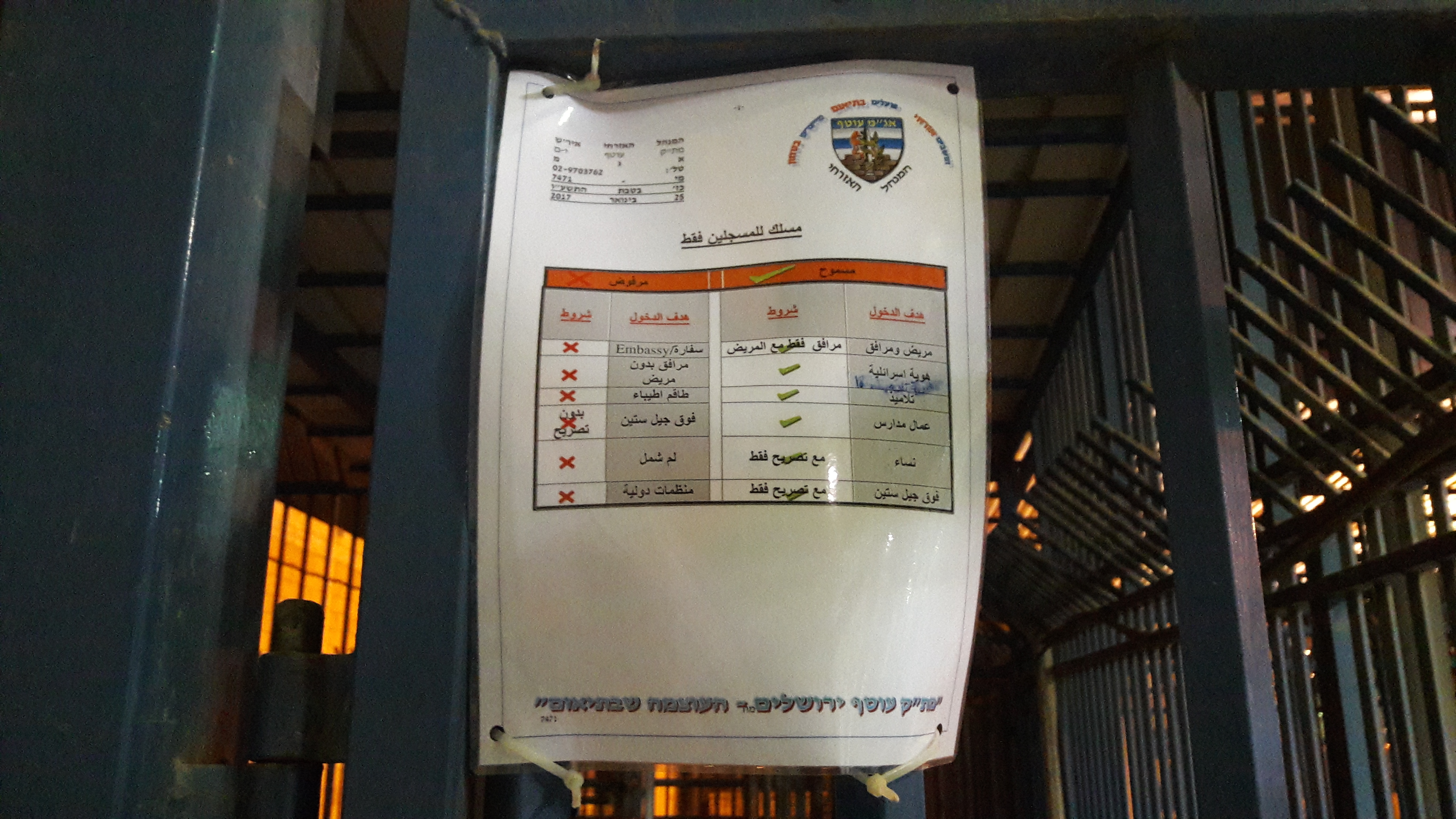 We went out to buy tea.  There seemed to be fewer people today. Presumably because of the weather many construction workers would not be working.

After 6.30 we joined a line.  We chose checking station no.4 today, a choice that turned out to be a mistake. Just before our turn the soldiers took a break for some unknown reason for a few minutes and did not admit anyone. When our turn came, they had difficulty searching our bags in the machine, and so we and three Palestinians who were with us had to pass our things through a few times until we were allowed to proceed.  It took slightly more than half an hour until we were outside. Luckily by then the rain had stopped.