Etzion DCO: Intelligence Police Prevention All Over the Place | Machsomwatch
Skip to main content
Back to reports search page

Etzion DCO: Intelligence Police Prevention All Over the Place 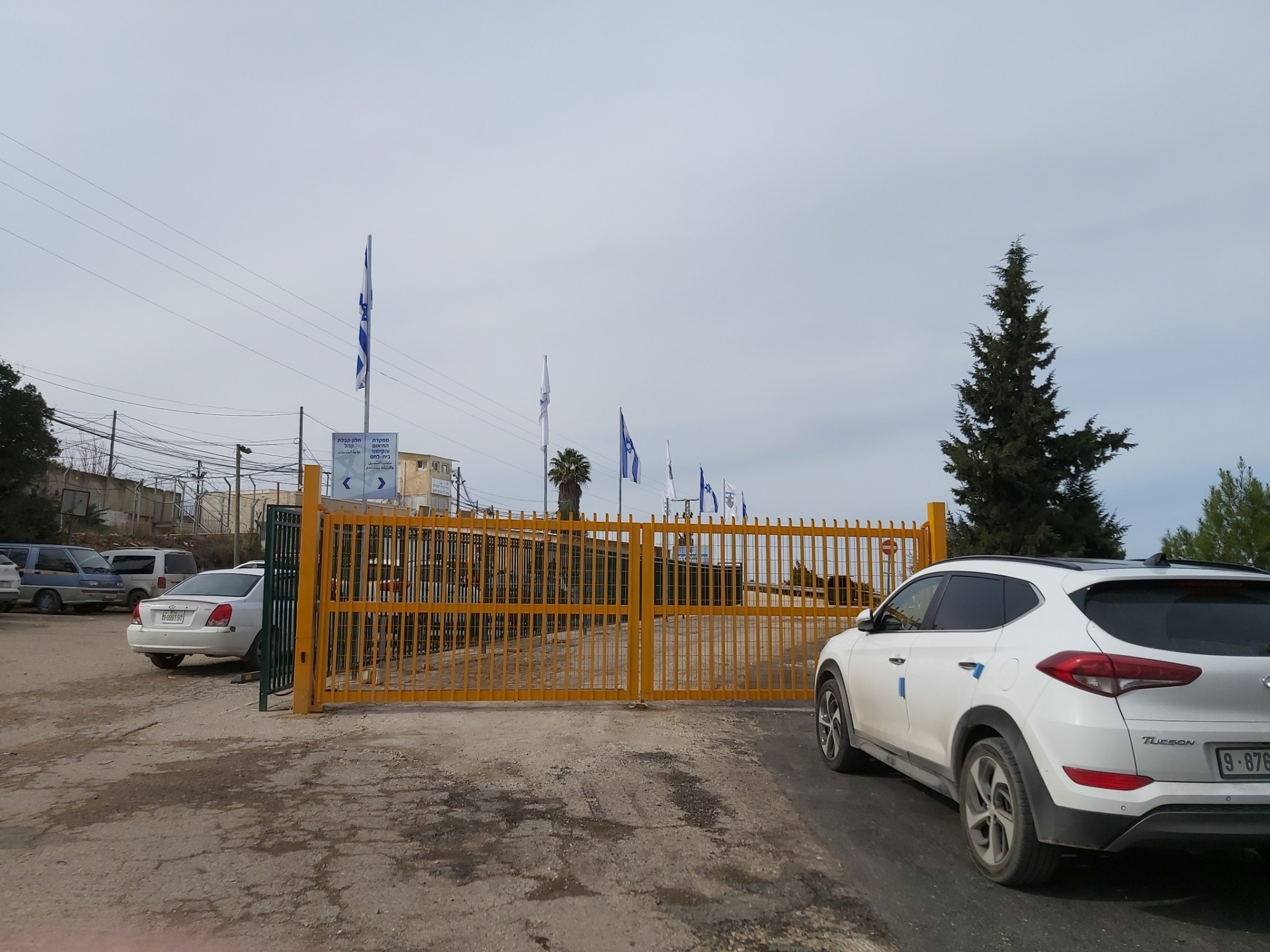 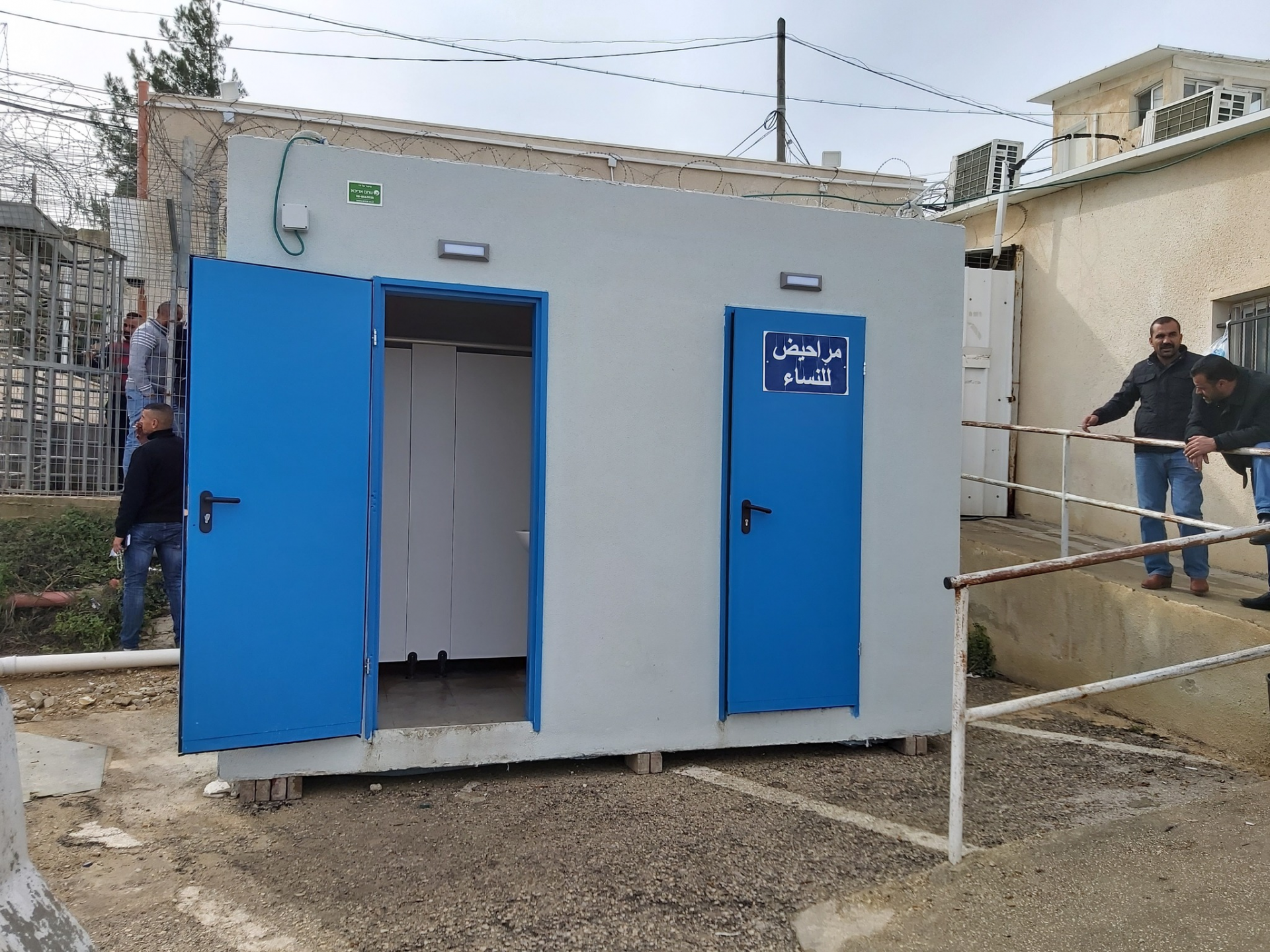 We arrived around 11:15. The work outside is complete. A yellow electric gate closes the entrance to vehicles, and to the left a green fence delimits the area and then extends to the left until the construction for servicing the public. All along there are flags on masts and new directions’ signs. At a corner in the fence there is a pedestrian gate. We have no idea who is permitted to enter here, maybe employers and people summoned to meeting with GSS. We only saw people leaving.

To the left of the entrance to the reception hall – Surprise, surprise:  A New Toilet Pavilion! After the bathrooms - which were filthy and unusable for a long time - were cleaned, made useful again and reopened to public use only recently, our colleagues reported last week that the previous pavilion was gone and disappeared. So now a new, beautiful and clean pavilion has been put in place, with a new pipe stretching. There are two restrooms for women and two for men. The cleaner was just cleaning when we arrived. The only downside for us is that these are "hit and run" toilets ...

Inside, the hall was not full. When we arrived, the machine issuing numbers was on pan and the screen above it showed no numbers, only pastoral olive harvest pictures. After a few minutes the machine started working again.

Among others, we talked to a woman from Bethlehem who came with her 22-year-old daughter. The daughter is studying cosmetics in the US. She came for the holiday break and tomorrow she has a meeting at the Jerusalem embassy to renew her visa to the US. She needs a permit to do this, but first of all, under the new procedure, she has to get a magnetic card. So, they are waiting in line, first of all for the issue of the magnetic card and then, hopefully, for the permit. They told us that Bethlehem is beautiful right now, decorated and illuminated, awaiting Christmas.

Many people turned to us for help and we did our best. Instructions were given and the card with the phone numbers was distributed to all applicants. The common problem today, which we have already heard about from someone by phone while on our way here, is the Police Intelligence Prevention that was generously imposed in recent days. They come up with a new way to harass people every time.

Intelligence Police Prevention is supposed to be imposed on a person that the police know is involved in criminal offenses. Such prevention can be imposed even on someone with a clean past and completely free of convictions and without open cases. If the police had any real evidence, they would open a case, call for questioning and prosecute. In the past, we have occasionally encountered such prevention, usually for people involved in agricultural thefts, car thefts, etc. This time dozens of people who have permits and worked in Israel without any problems have suddenly become Police Intelligence Prevented. In the last few days more and more of them are turning to Sylvia's staff from all over the West Bank, is it possible that all of a sudden, the police have reports about everyone???