At the Palestinian car-park in Barta’a Checkpoint, at what is considered the most crowded time (6:10 a.m.) people pass the turnstile and on to the terminal without waiting. In the past we witnessed riots here and now, since the number of Palestinians crossing into Israel from the West Bank has grown, and to be more precise – as construction workers of the new Israeli town of Harish, passage has become more efficient and the harsh sights of crowded waiting lines are gone. Sunlight reflects from the shiny metal of the new checkpoint installation. Inside it’s probably still a stifling nightmare of heat. It is not yet in use, thank goodness. We expect it to become a frying pan in summer and a noisy freezer in wintertime. We’ll wait and see.  We met Iyad, the contractor, a respectable looking man and pleasant conversationalist, whose name for the past year has been “decorated” with a black spot on the computer screen, meaning he’s “blacklisted”, prevented passage into Israel to make a living. He is waiting for time to pass until he is eligible to apply for removal of this prevention. Until one year ago he used to come to the checkpoint and volunteer his own time to keep the order in the waiting lines and prevent riots. One day (“someone ratted on me just like that”) the black spot appeared on the computer and since then, his life has gone topsy-turvy.

Our reports contain what we see and hear and understand and are able to report. What about the parallel reality at the checkpoints? Invisible and probably more fascinating. How does one survive in a state that leaves one no other choice but to re-invent oneself and think up every way possible to bring food home at the end of every single day? One day those stories too will emerge.

We hurried on to Anin Checkpoint, that usually opens at 6:30-7:00 a.m.  However, judging by the number of Palestinians from Anin who have already crossed over and gone to the nearby junction, it was obvious the checkpoint had opened earlier than usual. Some minutes after our arrival (6:35 a.m.) the soldiers closed the gates

and were gone, though a half-hour still remained until official closing time.

M., one of the oldest users of this checkpoint, told us that his permit will be invalid beginning tomorrow and still has not been renewed. This is to remind all of us that Anin villagers may exit their village to the seam-line zone from here only twice a week. He is naturally very worried and asks for our help.

At the entrance to the checkpoint we see a pile of clothes we handed people here at some point. The calf doesn’t always really  want to suck its mother’s milk…

We drove to Umm Al Fahm (inside Israel), climbed up to Iskandar mountaintop, and from there rolled down to the Tayibe-Roumana Checkpoint (154) at the eastern slopes of the hill. From here permit holders from Tayibe and Roumana villages may cross over to their lands and to the city on the other side of the Separation Barrier. We were 15 minutes early but already on our way we met three Palestinian who had already crossed over. There was no military presence at the checkpoint itself and on the other side Palestinians stood waiting. After a while a Border Police vehicle came but did not contain the team that lets people across, rather the team securing the Barrier – so they “don’t open checkpoints”. We inquired at the DCO, asking them to come and open the gate at least today for 15 Palestinians were waiting, but the DCO people insisted that the Palestinians all know opening times have changed! All? “Yes, all, we (Israeli DCO) informed the Palestinian DCO, the local councils and it’s also on the net!” 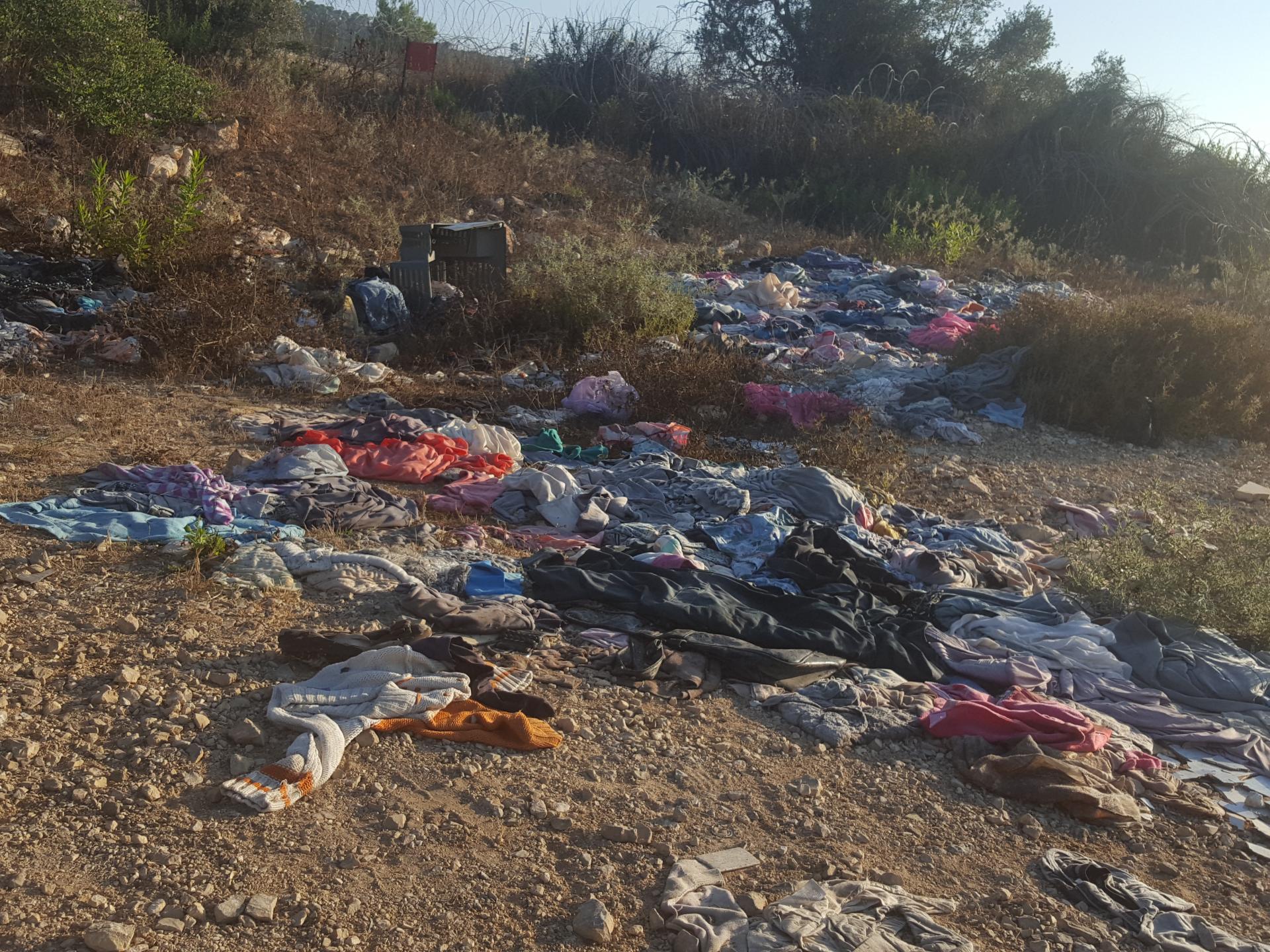 ​‘Aneen Checkpoint 11.7.18 – Clothes (that we gave to people) thrown at the olive grove near to the checkpoint
Photo:
Shuli Bar