This report is dedicated to Tzvia’s speedy recovery.  Her injury prevented her from being with us.

Our goal was to interview Muhammad Amira, from Ni’ilin, on video, and to observe the area penned in between Ni’ilin and the Hashmona’im settlement.

On our previous visit to Ni’ilin, on 28.12.16, Muhammad Amira, the science teacher, provided a great deal of information about the area penned in at the separation wall that cuts through Ni’ilin’s olive groves and the security fence of the Hashmona’im settlement.  This time we went to examine and photograph it from within Hashmona’im’s fence.  The difference between the groves within the wall and those beyond it is the difference between a well-cared-for grove that is cultivated and productive, whose soil is plowed and planted with vegetables, and one that is almost completely abandoned and neglected.

The settlers use their access to the area, which is almost hermetically sealed off to Palestinians (and which they can reach for only a few days during the olive harvest), for three purposes:

This “closed military area” is worth viewing from Hashmona’im.  The fence itself, it turns out, serves as a tourist observation point.  We didn’t stop to hear what the tourists in the bus that was parked on the dirt road beside the fence were being told, above the security road on which a guard patrols back and forth in a jeep.  I’ll explain why I want to observe from here.

A visual space has content.  Think about a stage or an art installation. The space itself tells a story, or provides a framework for a story you hear even before the first word is spoken.  If we can set aside for a moment our frustration at the facts created by the military regime that decided benefits one community at the expense of another, and institutionalizes this discrimination with excuses of security and historical, biblical rights, we will hear the story the space tells from Hashmona’im’s perspective to its residents, its children, and its tourists. It’s important for us to be able to hear it.

Anyone standing at Hashmona’im’s fence can understand the scene laid out before them.  On the Hashmona’im’s side is a well-organized, industrious settlement, seeking peace and quiet, and on the other side is a dangerous, wild people, the kind you see daily on television.  A people of assailants who must be kept at a safe distance and imprisoned by a wall. A mosque’s minaret rises insolently from within the wall, the muezzin’s voice sound five times daily over a loudspeaker. A threatening reminder of the alien and unforeseen with which peaceful interaction is impossible. That’s what the children of Hashmona’im are told, as are the tourists peering through the windows of the armored buses.

From this side of the wall, two army posts are clearly visible, from which soldiers can fire on Ni’ilin’s demonstrators each Friday. They demonstrate on the other side. Five demonstrators were shot and killed from those posts, and many were wounded, including Muhammad Amira.

The Friday demonstrators are attacked by soldiers from two directions: from inside the village and from the top of the wall.  The soldiers operate inside the village to prevent demonstrators from reaching the wall!  As if the wall itself represents the occupying power and must be protected by its soldiers.  Is it paranoia?  Or is it fear that Amira’s talk of peace and cries of “this is a non-violent demonstration” will be heard by the soldiers and make them see the absurdity and villainy of their actions.  Amira talks to the soldiers as if they were schoolchildren, appealing to their moral sense.

A demonstration on this side of the wall is like a demonstration in a sealed box, where injustice and protest are imprisoned.  I suggest demonstrating against the illegal sewage installation that takes advantage of the fact that the Palestinian landowners are prevented from accessing that location so the refuse of the “cultured” settlement can be discharged there.  I suggest holding the demonstration on the road from which tourists are shown Ni’ilin, rather than at Hashmona’im.

We should point out the difference between the modern sewage plant built by the Halamish settlement in the Dir Nizam nature preserve (the report from 22.11.16) and Hashmona’im’s sewage.

It’s no accident: Meron Benvenisti wrote already in 1980, in A Lexicon of Judea and Samaria, that “the nature preserves will be developed for tourism and provide an economic basis for the settlements to be established nearby” (p. 122).  So some things are permitted, some prohibited, and some worth doing.

The video Nurit and H., a photographer from B’Tselem, filmed in Ni’ilin opens at the Hawwaja castle that was restored by Riwaq and serves as a community center.  Among its other activities, it offers workshops and hot meals to children as part of the work of an educational organization.  The video, whose principal figure is Muhammad Amira, continues to the hall dedicated to an exhibit about the Holocaust (established in cooperation with Yad Vashem) and then moves to the olive groves on this side of the wall.

Map of the closed military area between the wall around Ni’ilin and the Hashmona’im settlement. 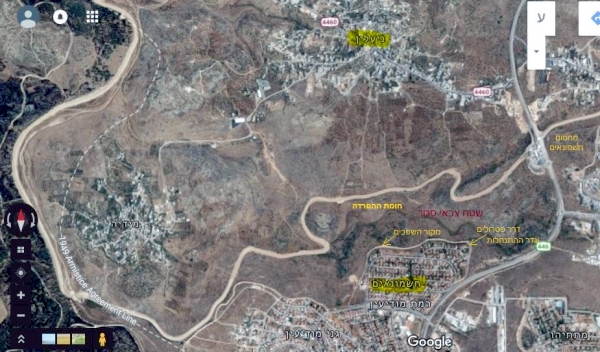 Muhammad in the Holocaust exhibit in Ni’ilin 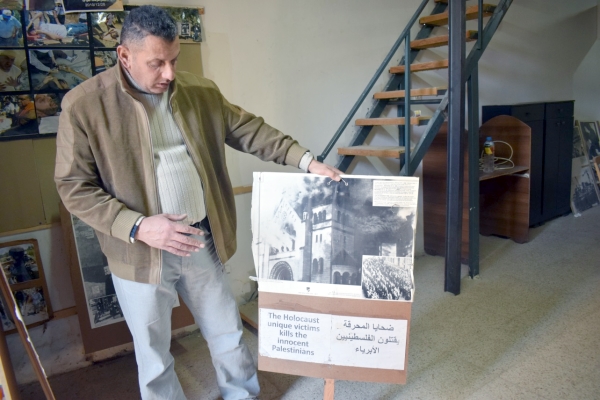 The sewage installation in the Hashmona’im settlement, with the wall in the background. 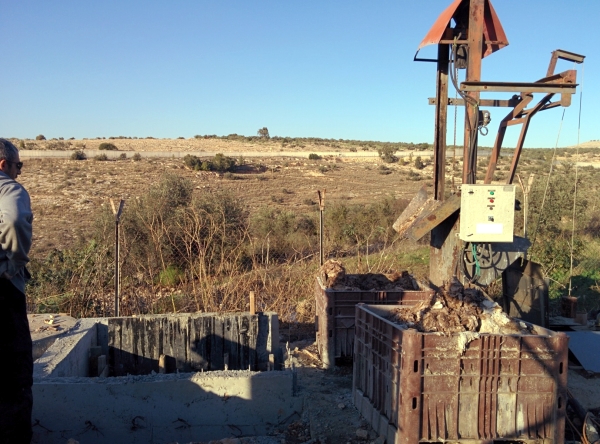 The checkpoint is located on the separation fence that forms the Seam Zone of Modi'in Illit on Road 446, slightly south of the entrance to Na'alin.
This Checkpoint is designed for Palestinians (pedestrians) who have permits to work in Israel. About 8000 people pass through it every morning. They are checked in the testing facility.
The checkpoint is open for the Palestinians on weekdays 04: 00 to 19: 00. On Friday 04: 00-13: 00.
Israelis, foreigners, diplomats, and international organizations are allowed to cross by car seven days a week, 24 hours a day.