I always hear about demolitions and confiscations after the fact. This is the first time I witness the destruction in real time. Witness the turmoil undergone by thpro victims and the indifference of the perpetrators.

People pointed in a certain direction and said, go there. Photograph what they’re doing.

I went where I was told.

Present was a reinforced force of the Border Police (after all, the ‘border’ runs here), flanking a kiosk that provides livelihood for a very extended family.

When I approached it with my camera

, I was blocked by 3 armed men who hit me with the butts of their rifles and pushed me.

I was pushed towards a black-clad woman. We stood there holding each other. Photograph them, said the woman. I did.

On the other side of the road, a man walked. All a-fluster, angry – his shop and its contents were taken before I arrived. Why? Because he ‘doesn’t hold a trader permit’.

He was released from prison just a few months ago and is working hard to recover his life and provide for his family.

Now his world has toppled and he is left empty-handed once again, what they had taken is all that he had, he said, and wished to know the name of the commander (in the picture) in order to lodge a complaint. But the commander, conducting the armed men’s chorus, ignored his request and handed him a form specifying how much money he was being fined.

You call us terrorists, yelled the man whose heart was breaking, but it’s the other way around – you are the terrorists and you force us to be that too. So far I have towed the line, but you’ve now turned me around. Turned me around!

When they were done with him, they turned to the second kiosk whose owner, too, has no trader permit and will not have one, either.

A truck bearing a crane approached, the Border Policemen designated a ‘sterile

’ area where no Palestinian (nor I) are allowed to enter. They closed the doors of the kiosk with all its content, shackled it up, and it was lifted up like a cloud in the sky, placed on the truck and that was it. The confiscation was complete.

All the while, the armed force stood between us and this act of looting. Even a grenade at the ready appeared from somewhere in one of the armed hands, showing the strong, violent side’s fear of the weak, desperate ones.

Another person who was victim of the looting was the woman in black, who a just a few hours earlier had given the kiosk owner for safekeeping a small gas tank she had bought for her son and went off to other chores. When she got back she realized that her property was locked inside the stolen, lifted kiosk and taken away by force of the police, or its weapons, or instructions issued by the Jerusalem municipality.

The woman in black was the only person in the entire large crowd watching the goings-on who dared face the armed men and tell them what she thought of them.

I have a lot of sympathy for women who dare to fearlessly face threatening guns.

When the forces completed their mission, they turned toward the next junction. Now Yunes will get screwed, said a young man standing near me.

We remained standing for a while at the roadside, a group of people defeated and despairing.

And I was wondering whether any of the wrongdoers, going home for the weekend, will say to his mother: This week, mom, I destroyed the livelihood of several families and physically struck a woman? 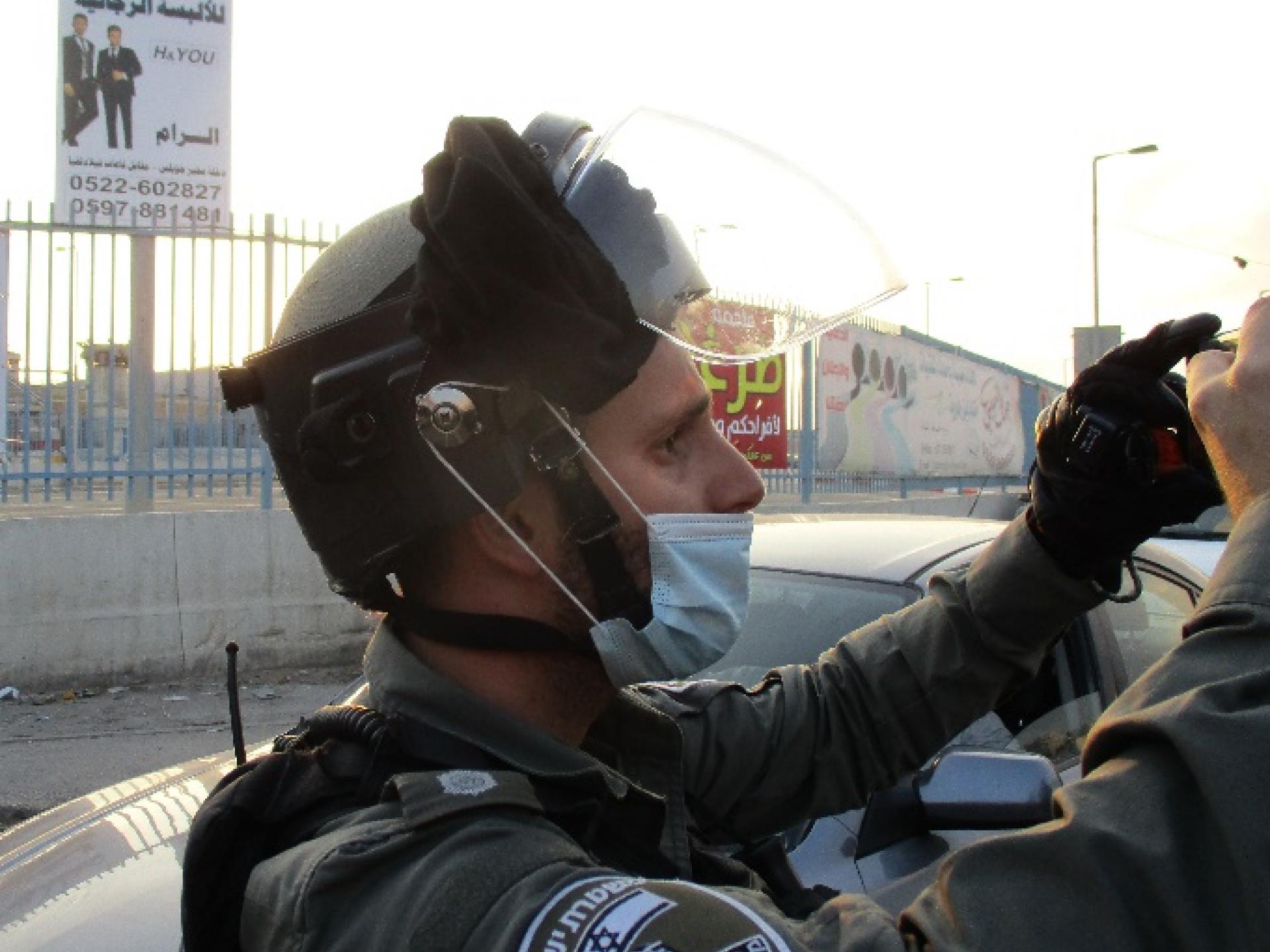 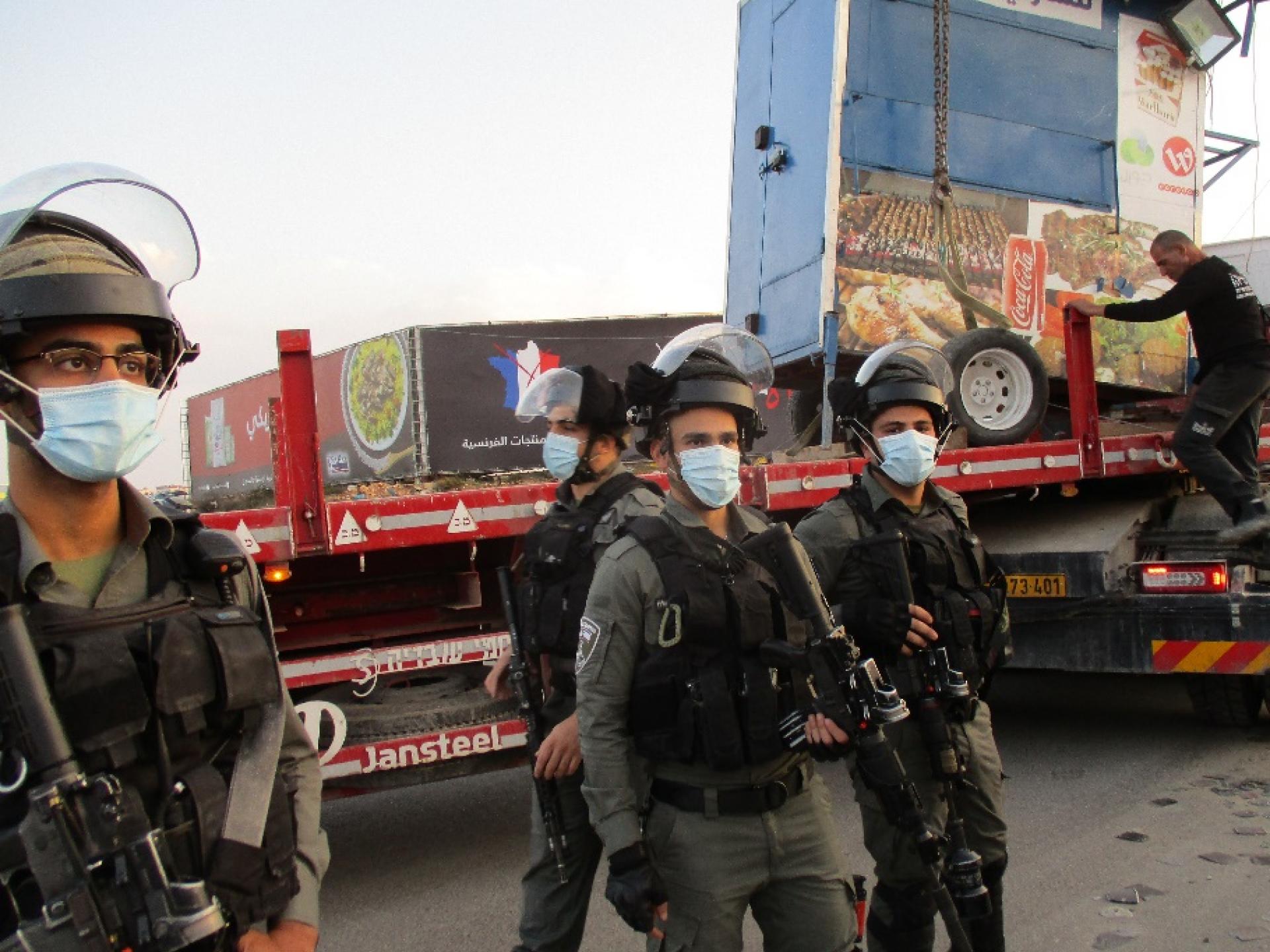 The truck is secured by border police 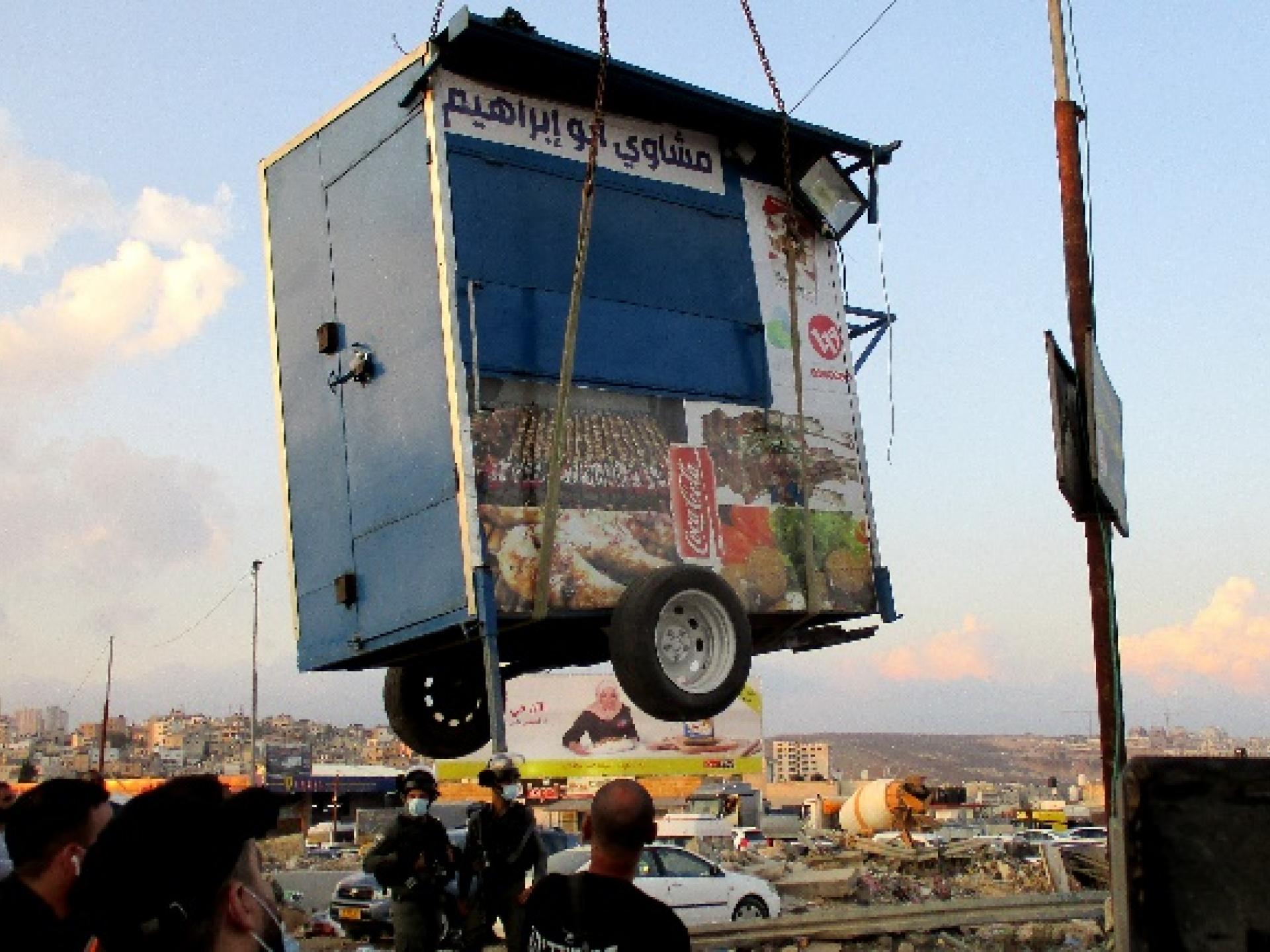 The kiosk is tied with cables 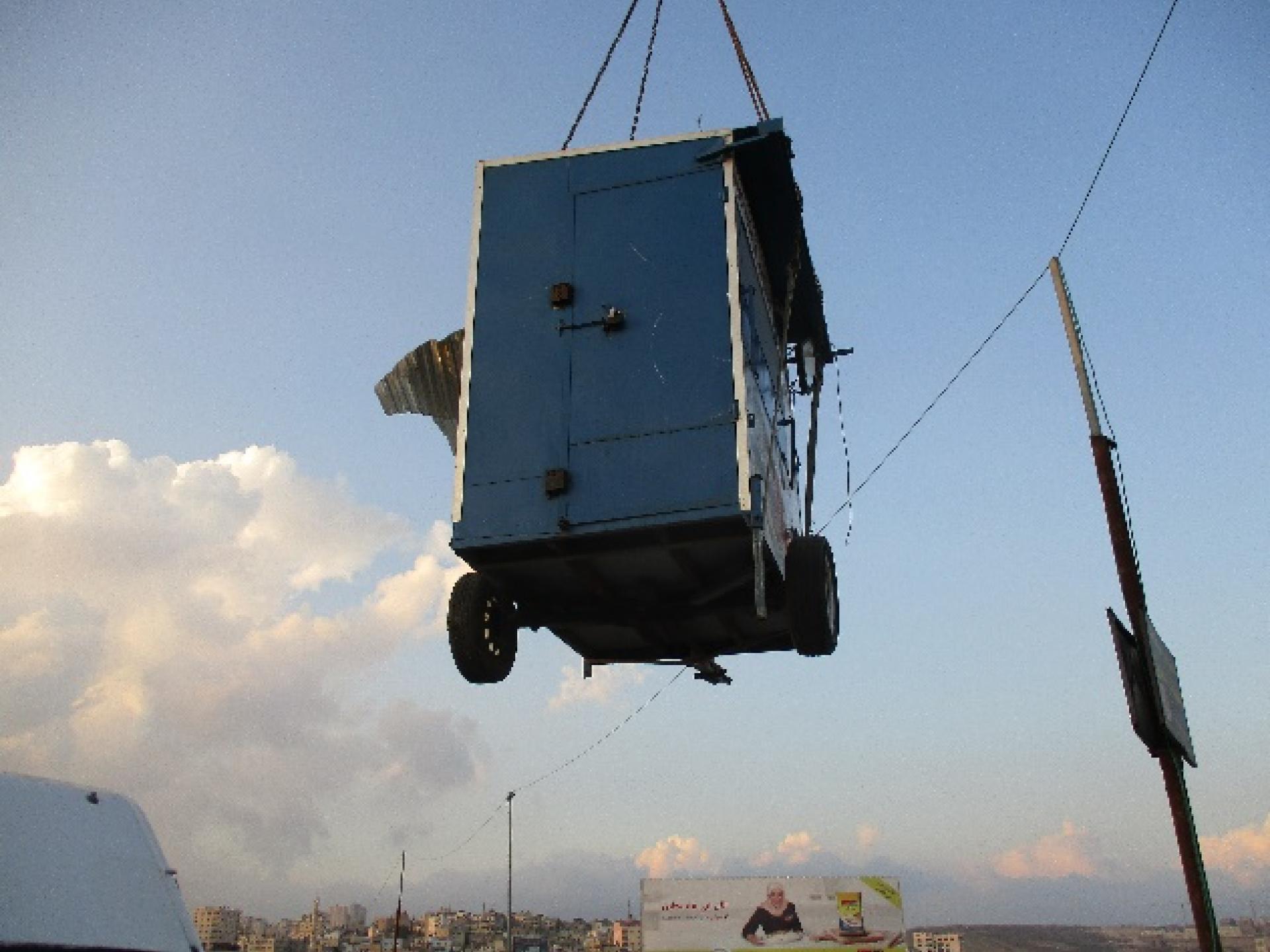 The kiosk was hoisted 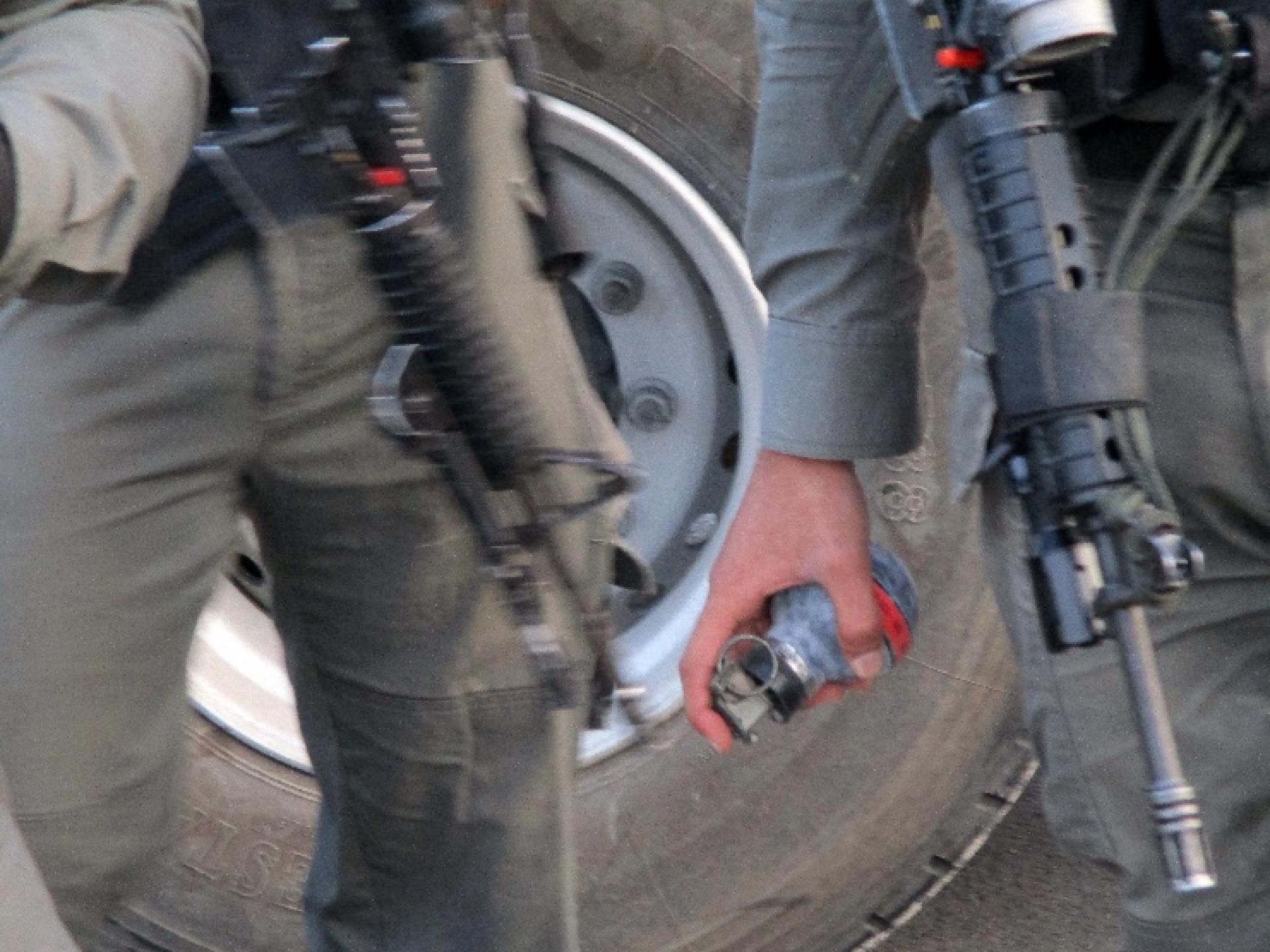 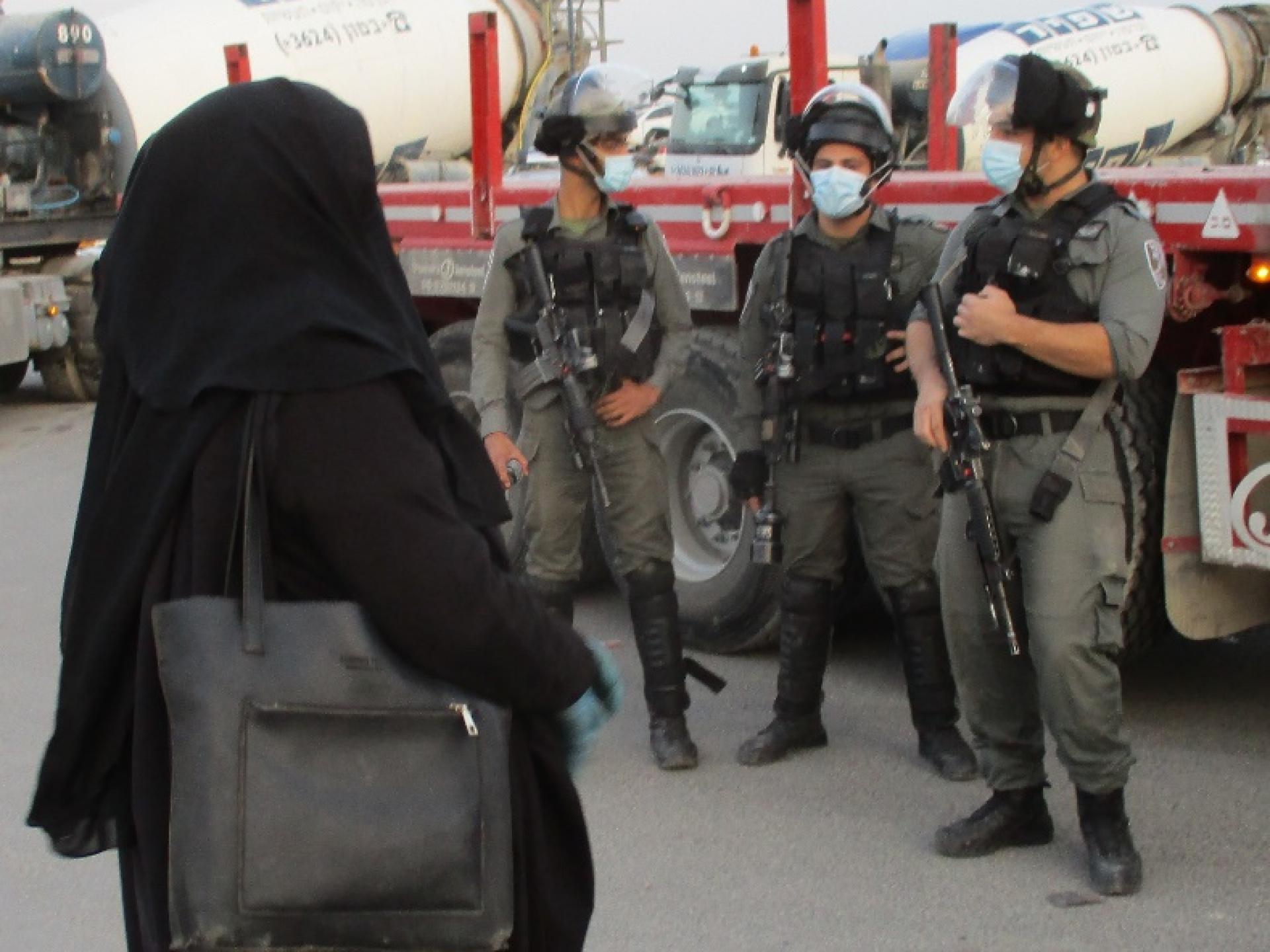 The woman in black