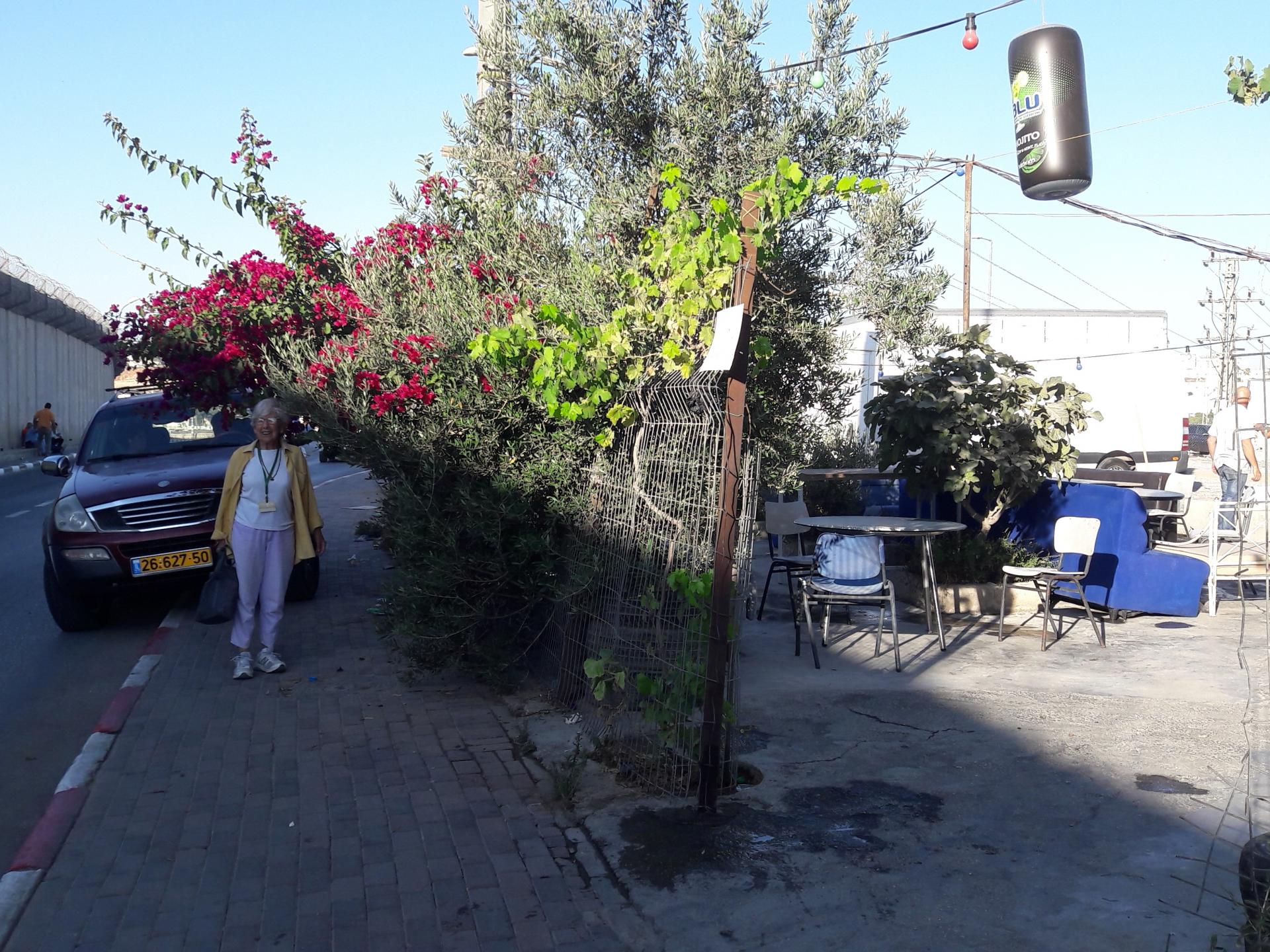 Chana under the bougainvillea 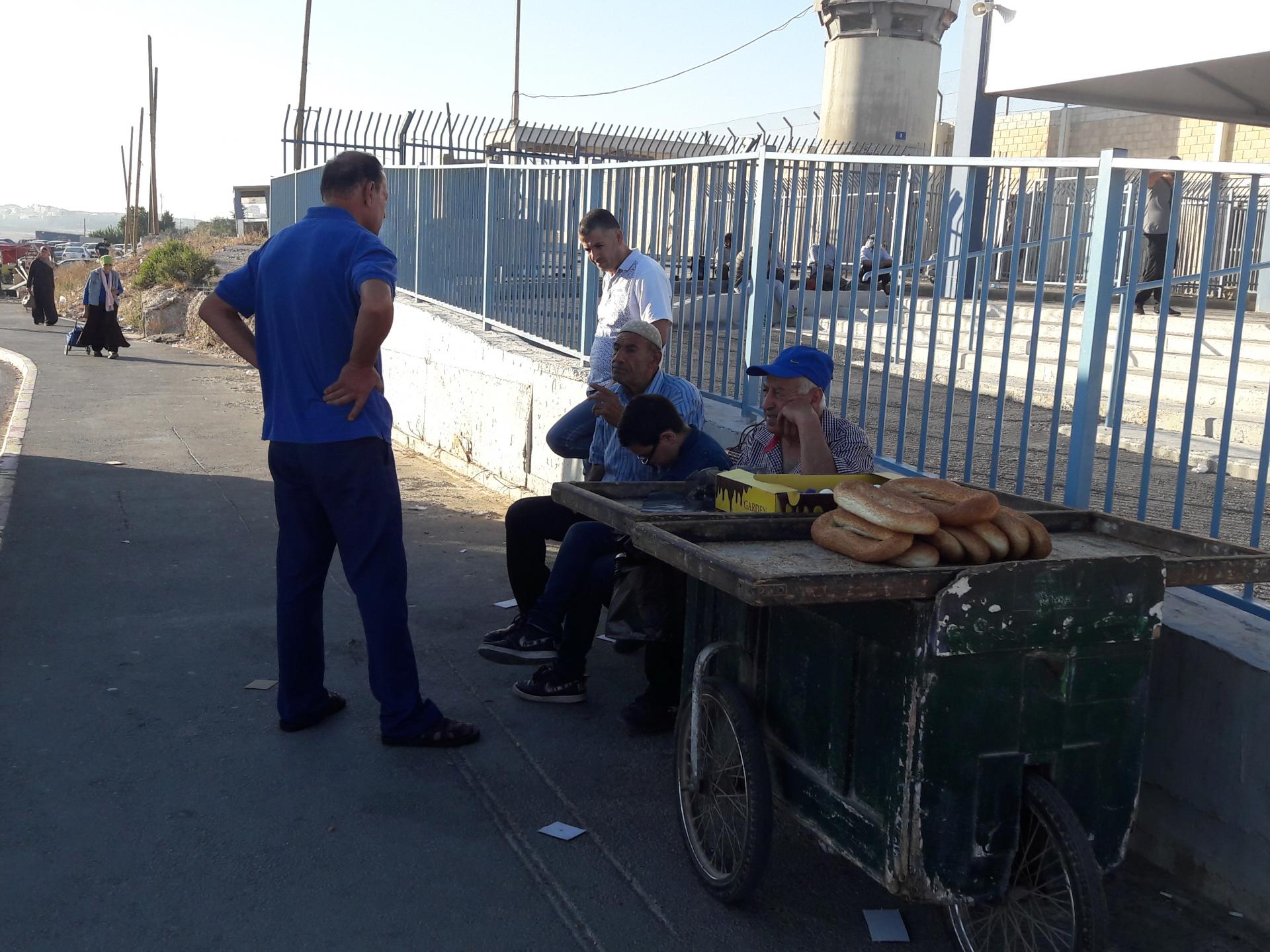 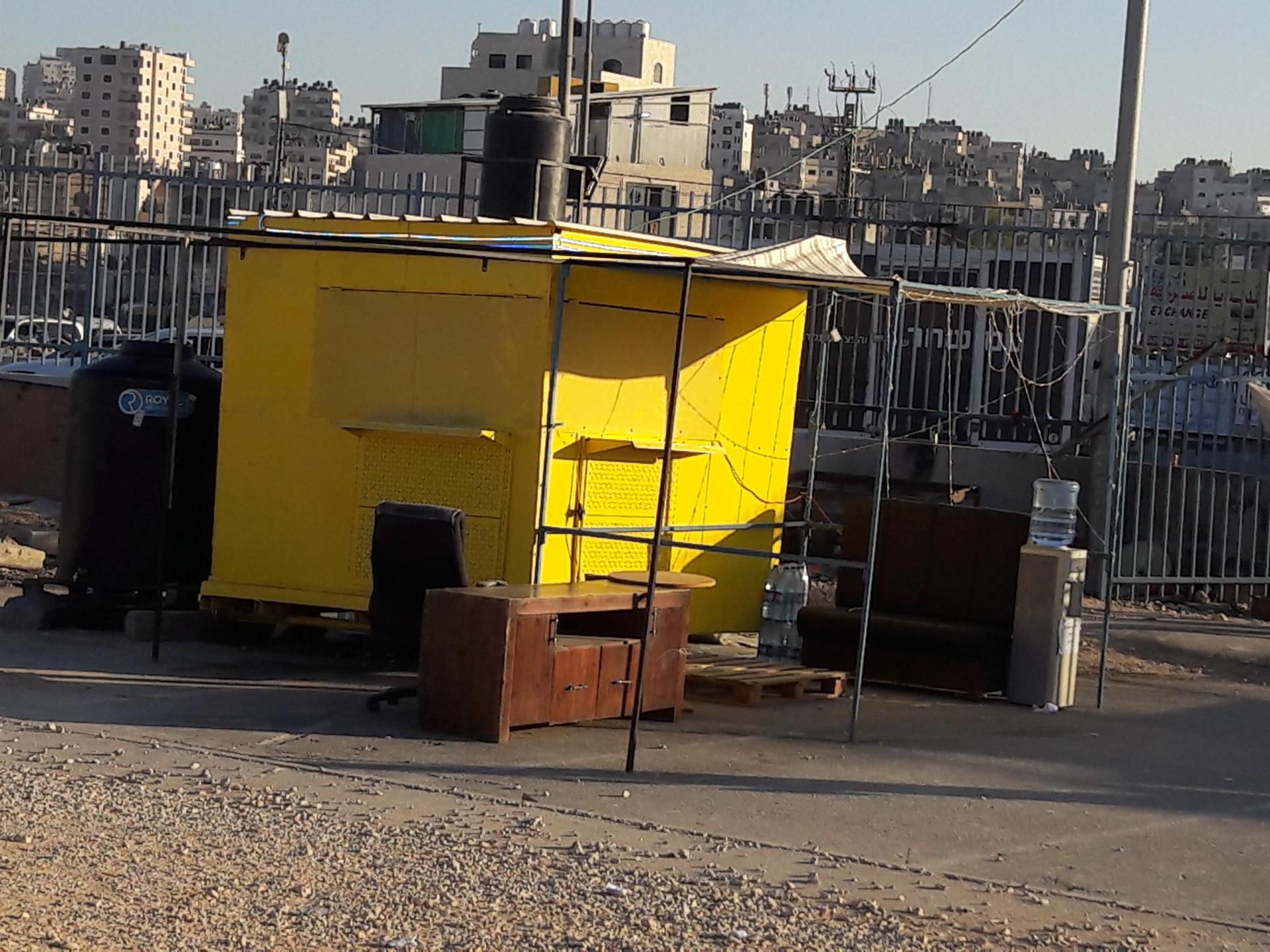 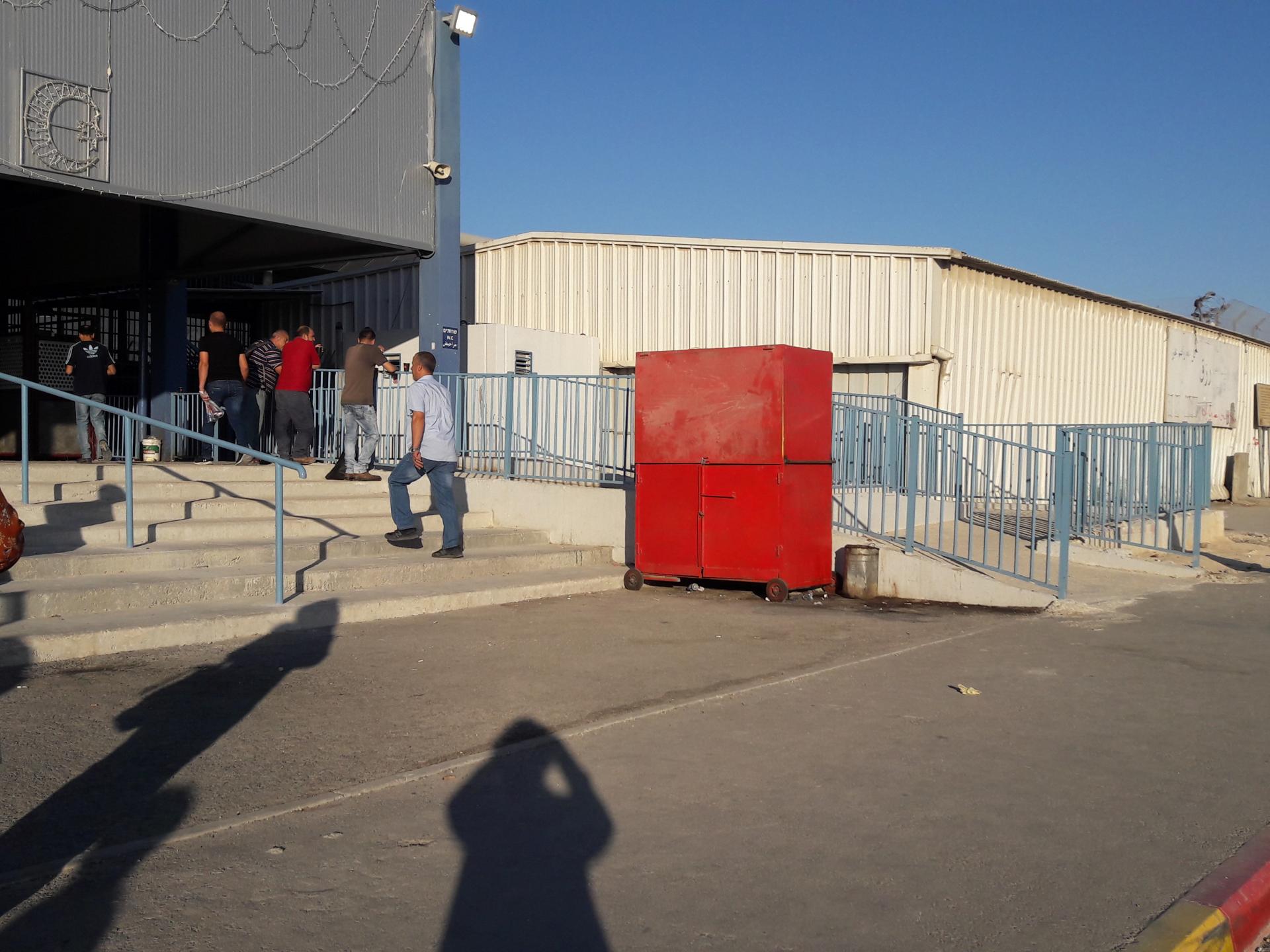 The kiosk red booth at the entrance to the shed 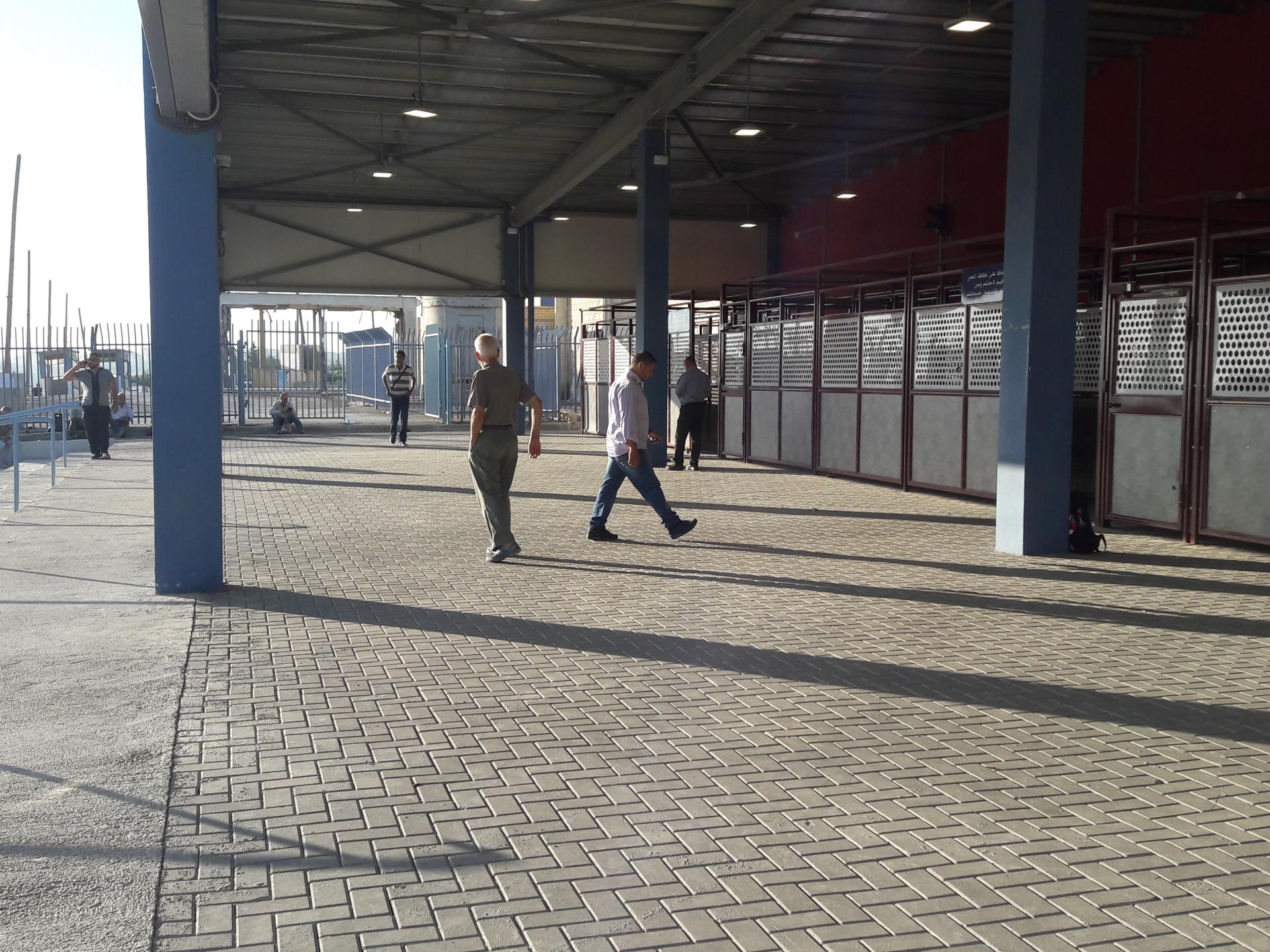 The area beneath the shed is sunny this morning 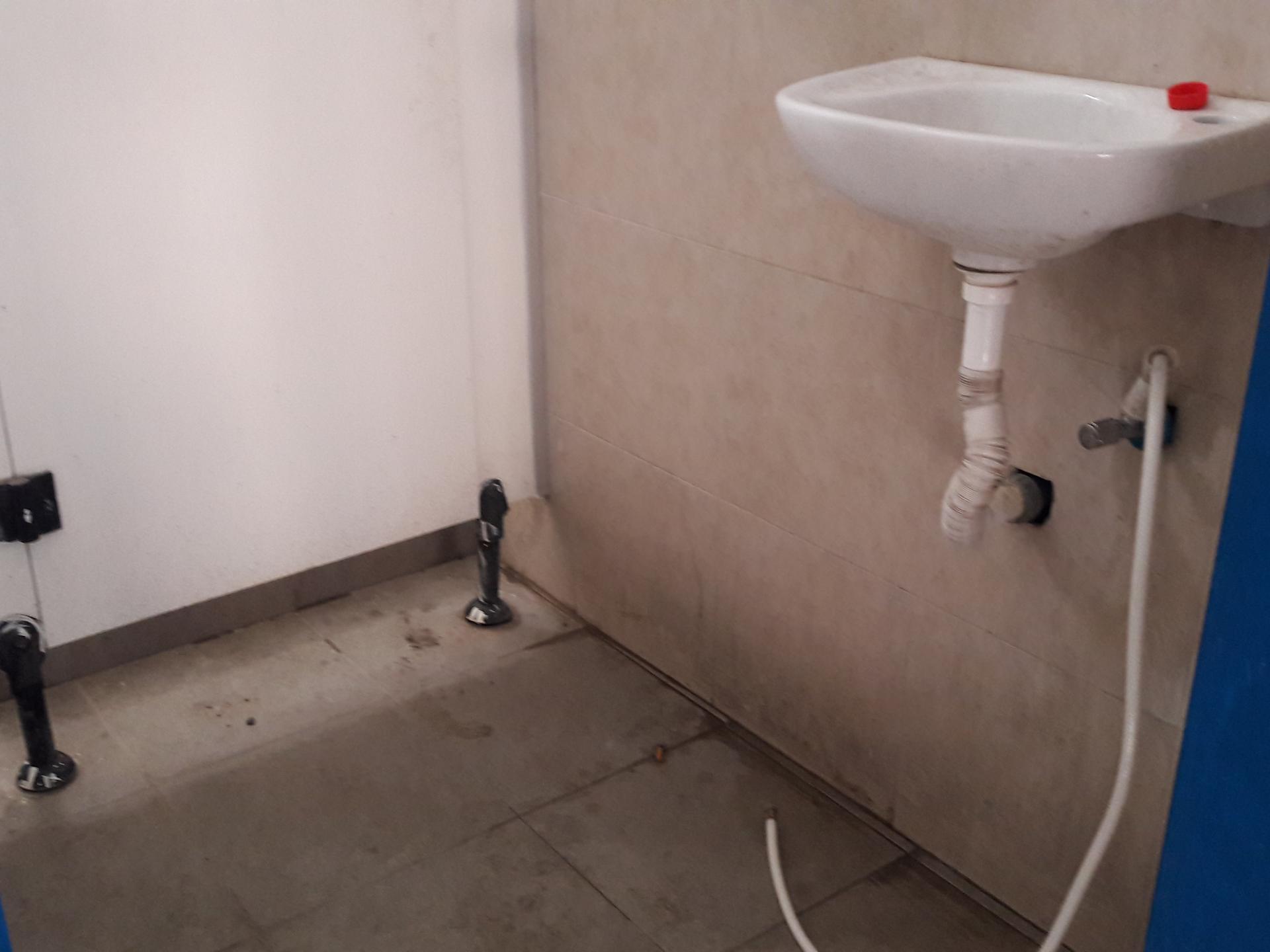 Sinks without faucets in the toilet 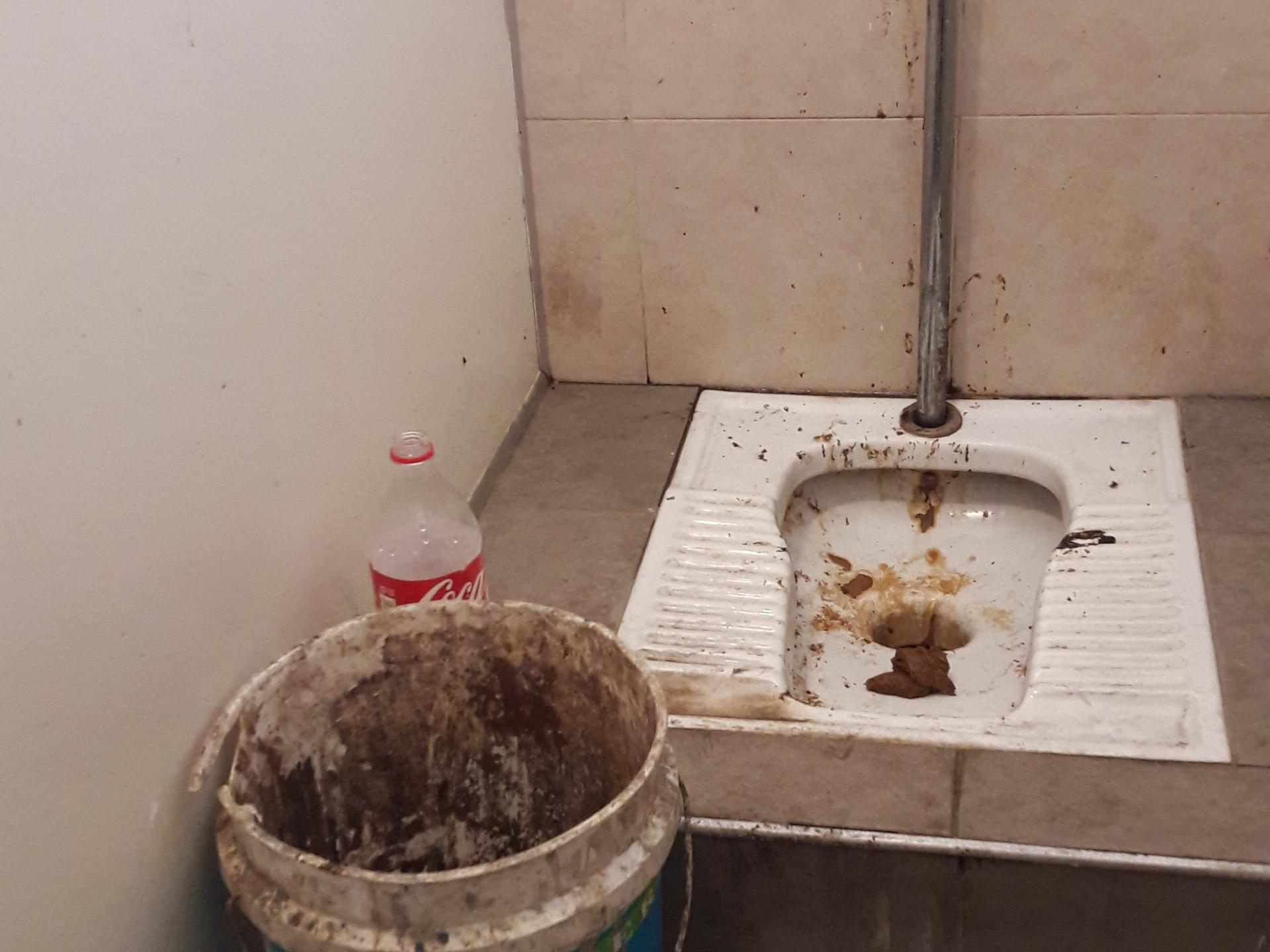 The toilets are in disgrace 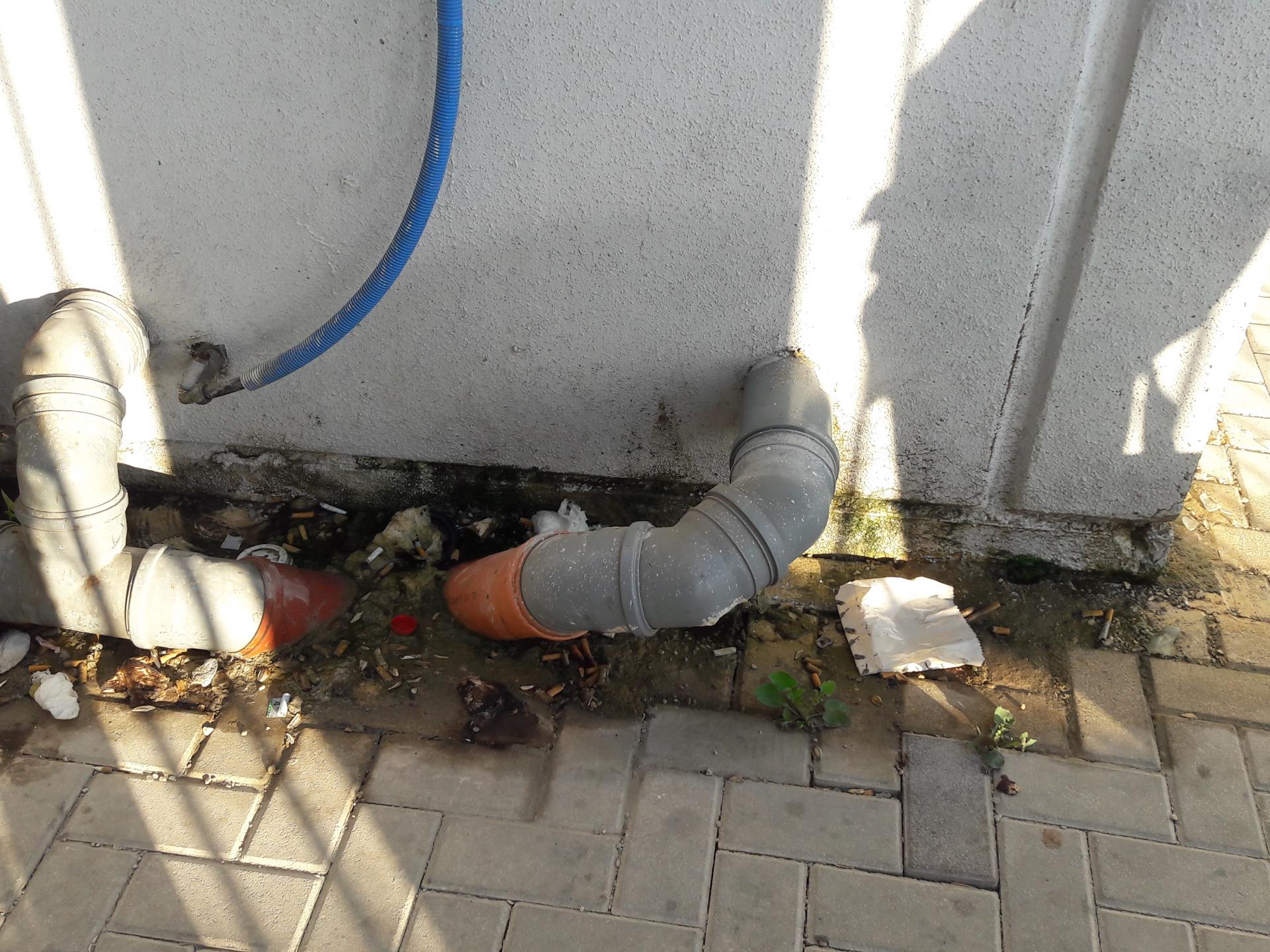 A leak from behind the lavatory, the blue pipe dripping water

06.20. We arrived, later than in the past, now that the Palestinians also come later because passage is so much faster thanks to the automation.  On the Israel side road works are still going on – perhaps next time we come the work will finally be completed?

On the way from the parking lot on the Israel side were many men waiting for their transport to work, and also many were in the ‘garden’ of the coffee shop. There the bougainvillea was blooming, spreading over the sidewalk.

On the Palestinian side we met our friend Abu Ramzi the beigel seller, at his usual place in front of the entrance. He sits in the sun on the only bench available. Only when the minibus arrives and parks next to him can he enjoy the shade it gives. Today he has with him his 12 year-old grandson who is on school vacation. Young Ahmad concentrates most of the time on his phone, but sometimes chats with us hesitantly in English. Abu Ramzi’s friend, an elderly man who worked many years in Jerusalem, tells us of his many workplaces, including a bakery in Mahane Yehuda. He knows well our friend H. who used to work there – they are from the same village – and in fact introduced H. to the work when H. was a youth. The man is a widower and tells us he is looking for a Jewish wife. Maybe he is the man who offered marriage to our friends last week? He was disappointed to hear that our husbands are still alive and well…

As it was so hot we didn’t go to buy tea at the kiosk. In addition to the big kiosk next to the parking lot in the Ar-ram direction, (whose owners also control the parking lot),there are now two ‘branches’ which gradually get upgraded. One is a red kiosk located at the entrance to the checkpoint; the other is a large yellow kiosk at the entrance to the checkpoint complex, coming from Qalandiya. On its roof and behind it are black water containers; there are seats in front, and a cold water dispenser. At this hour only the main kiosk is open. Apparently at this early hour anyone coming from Qalandiya has already drunk coffee at one of the kiosks in the camp. But on the way home, these will be their first stop.

All was flowing freely in the hour that we were there. Now that conditions are so improved – and as long as the permit system prevents free passage for all – hasn’t the time come finally to complete all the physical work and repair faults?

For instance, the shed gets full sun in the summer morning because of the angle of the sun’s rays. Also, in the whole shed area there is no seat, and no trash can. Luckily most people can just rush through. But for people who are waiting for the offices to open there is no relief. They sit on the concrete balustrade on the side (where there is a tiny bit of shade), or else wait on benches in the old decrepit shed.

The toilets are also still located at the old shed. These were open and lit. The front parts of these were relatively clean, but there was no running water for washing hands. We bravely inspected – and photographed - the toilet cubicles themselves and were horrified by the sight and smell. Behind the toilet building, there was a water leak.