Our goal was to visit “Giv’at Hayekavim” antiquities site, which is thought to date from biblical times, and its extensive area is used as for educational purposes.  It includes the “Sheikh Issa” tomb.  We reached the site from Rosh Ha’ayin, through the Talmon settlement, which comprises three settlement areas:  North Talmon, Talmon A and Talmon B, built around the biblical antiquities site. Inside the settlement, there is a military base with pre-fabs, an observation tower, and armored vehicles.

The guards at the gate observed us suspiciously but indicated the route to the Harsha observation point.  The drive from the gate to the site was relatively long and showed just how large an area had been expropriated for the settlements.  We saw a few times along the way large signs referring to the Binyamin Region.  When we drew near we saw a large statue of an elephant which was completely out of context, nor was it clear why it had been erected there.

When we arrived we met two friendly settlers who work there.  They had apparently been notified by the guards.  They offered us handouts with information about the site and suggested we listen to the recorded explanations available by clicking a button on stanchions erected in various locations. 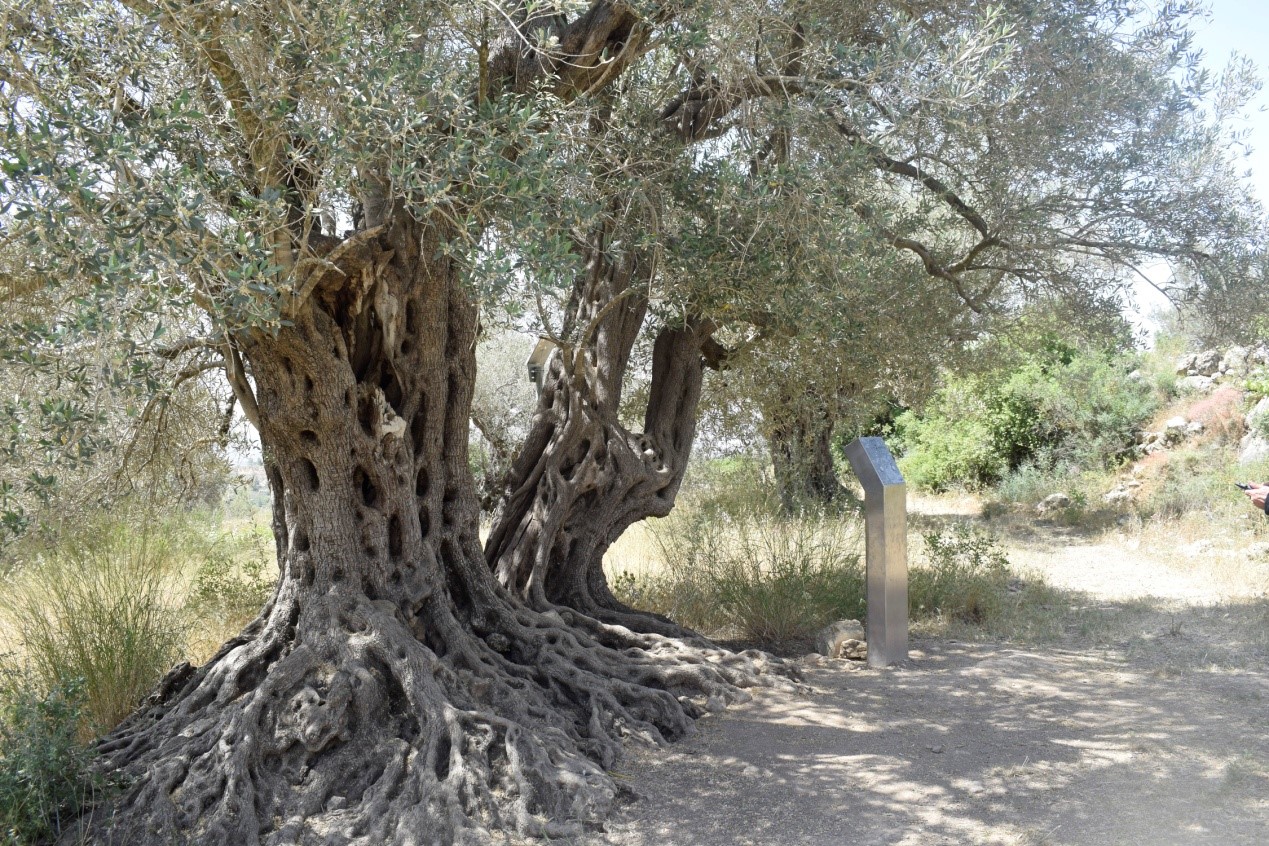 The paths through the site are very well maintained.  Wooden steps with railings have been built on the slopes.  It’s obvious there are no budgetary restrictions on either construction or maintenance.  The loudspeaker stanchion reported that long ago the site was a dense forest, and that Joshua allocated it to the tribe of Ephraim.  A verse from the book of Joshua was cited as proof.  Ancient olive trees and large oaks stand near Sheikh Issa’s tomb.  Not much is said about it, but we’re told that the Moslems used to come with their flocks, which is why much of the forest had been destroyed.  The impressive oak trees are evidence of what had once been here.  They weren’t destroyed because the sheik’s tomb and its surroundings are sacred to Moslems.  The tomb is neglected.  We can’t tell whether the scattered stones are evidence of damage to it, or that they had always been there.  In any event, no attempt has been made to reconstruct it.  As far as we know, Palestinians aren’t allowed to enter the nature preserve, so they can’t visit the tomb.  Nor can they reach the flowing springs in the area, which have been given Hebrew names.

The massive investment, which is clearly visible, is intended to take visitors back to “biblical” times. The extensive system of underground vats, presses, conduits, and caves scattered throughout the site served the rebels of the Bar Kochba period as hiding places.  The mystery of the elephant was explained in the printed material we’d been given.  “The elephant was captured from the Greeks by the Maccabees who had been active in the area.”

The “piéce de resistance” for the site’s visitors is “the Mediterranean tower,” standing on a hilltop, from which, on a clear day, the sea is visible.  That’s how, in essence, the settlement is connected to Israel within the Green Line, to show that everything is in close proximity.

From there we drove to Beitunya, near Ramallah.  Much construction.  It’s high up, and almost the entire separation fence is visible.  We had hoped to speak to the mayor but learned that one week prior to elections the terms of the mayors and council heads have ended.  The person serving as acting mayor until after the election spoke with us briefly and offered to give us a tour of the “apartheid fence.”  When he realized we’re Israeli he consulted the security man who decided that the timing was too sensitive and it would be better for us to leave.  He also escorted us in his car until we left the town.