Irtah - a woman complained she was almost suffocated 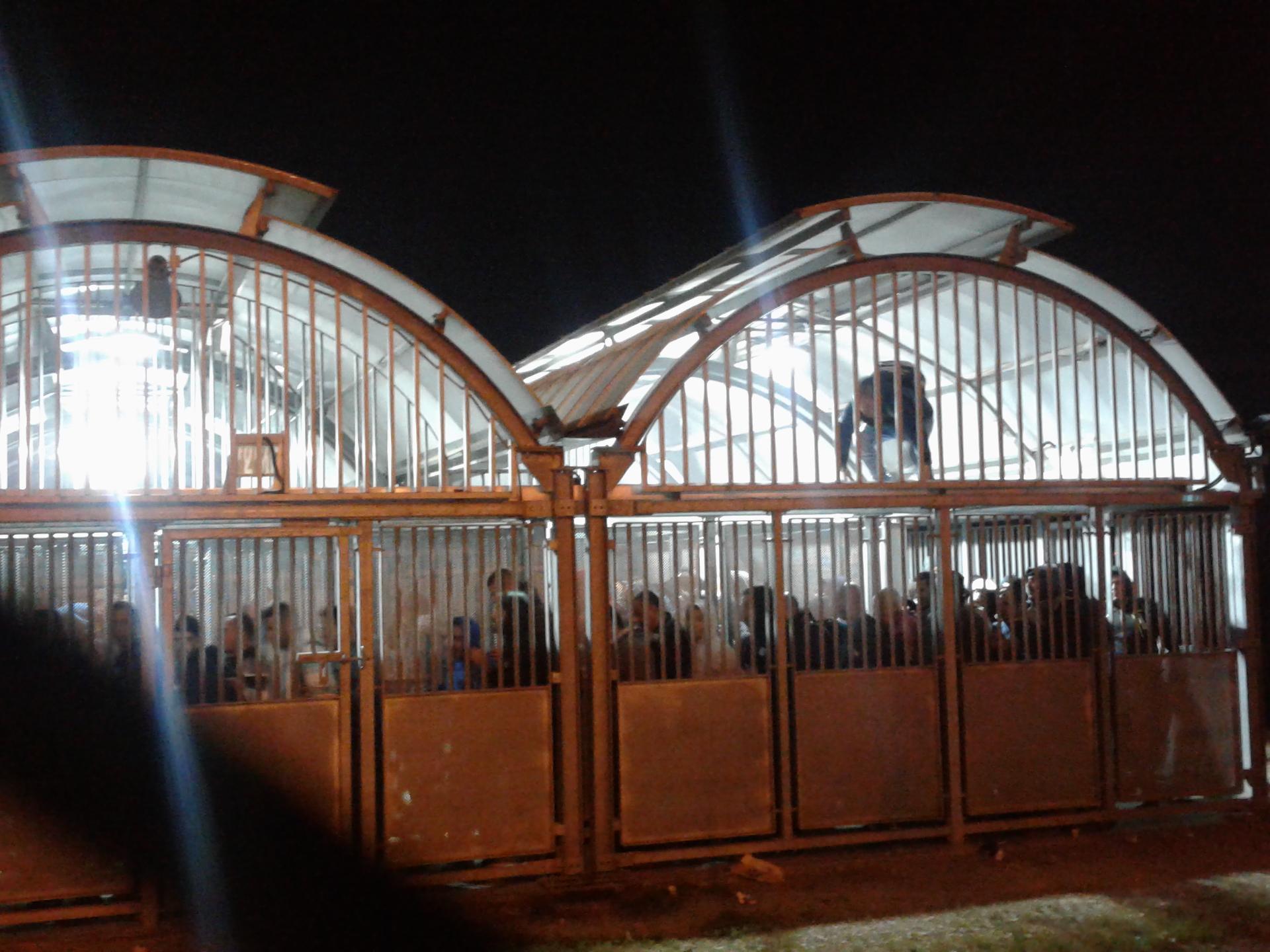 Crowded at the Irtah checkpoint. Young people climb the bars.

At 4:03 the first Palestinians have passed through the checkpoint. However, when we approach the separation barrier, even this early we hear roars of anger and protest from the crowd waiting to get in. A few young men climb up the walls of the roofed waiting area on the Palestinian side of the barrier, to proceed over the heads of the people in line and get ahead of them. This always happens when movement is slow, never when traffic flows smoothly.

The open area, between the separation barrier and the checkpoint building, is packed full of people. One man calls to us in English, "Go there, outside. We are suffering!"

On the Israeli side of the checkpoint a man stops with similar complaints. We ask what he thinks should be done. He thinks a moment and answers, (1) At least on Sundays, open the checkpoint earlier than 4:00. (Note: Sunday has more traffic than other days because some Palestinians have passes that permit them to stay overnight in Israel. They tend to spend the work week in Israel, going home Thursday or Friday and coming back Sunday morning.) (2) Increase the size of the waiting area on the Palestinian side - it needs to be at least doubled. (Note: the territory is nominally Palestinian, but it's Area C - Israeli controlled - and the Israeli authorities are responsible for building there.) (3) Limit the people using the checkpoint between 4:00 and 6:00 to laborers only. (This third suggestion is certainly not acceptable to the people who are not officially listed as laborers, notably men over age 55 who are entitled to cross the border without a special pass, many of whom continue to work as laborers.)

Of the three people we chose to watch for at 4:10, a woman and one man get through the checkpoint in eight minutes, another man takes 13 minutes.

Around 4:30 there is still a big crowd waiting at the separation barrier. People still shout angrily, a few still climb the walls to jump the line. We picked three more people to watch for. One got through in 11 minutes, one took 18, and the third - 25! On the Israeli side a woman complained that she was almost suffocated in the crowd entering the checkpoint, and a man claimed that his arm was wrenched.

Was this a particularly bad day, or is it always this awful?

At 5:30 we met a group of young Israelis, from the Negev pre-army preparatory course, brought by our fellow MachsomWatch volunteers Yael Sadan and Raia Yaron. We took them to see the entrance to the checkpoint, by the separation barrier, but a guard asked us to move back. It seems that the checkpoint managers expect to be consulted before groups come to visit, though it's public property. The shift supervisor came out to speak to the group, and Yael got his phone number so she can coordinate future visits. We took advantage of his presence to request (again) that the checkpoint opens earlier, at least on Sundays.