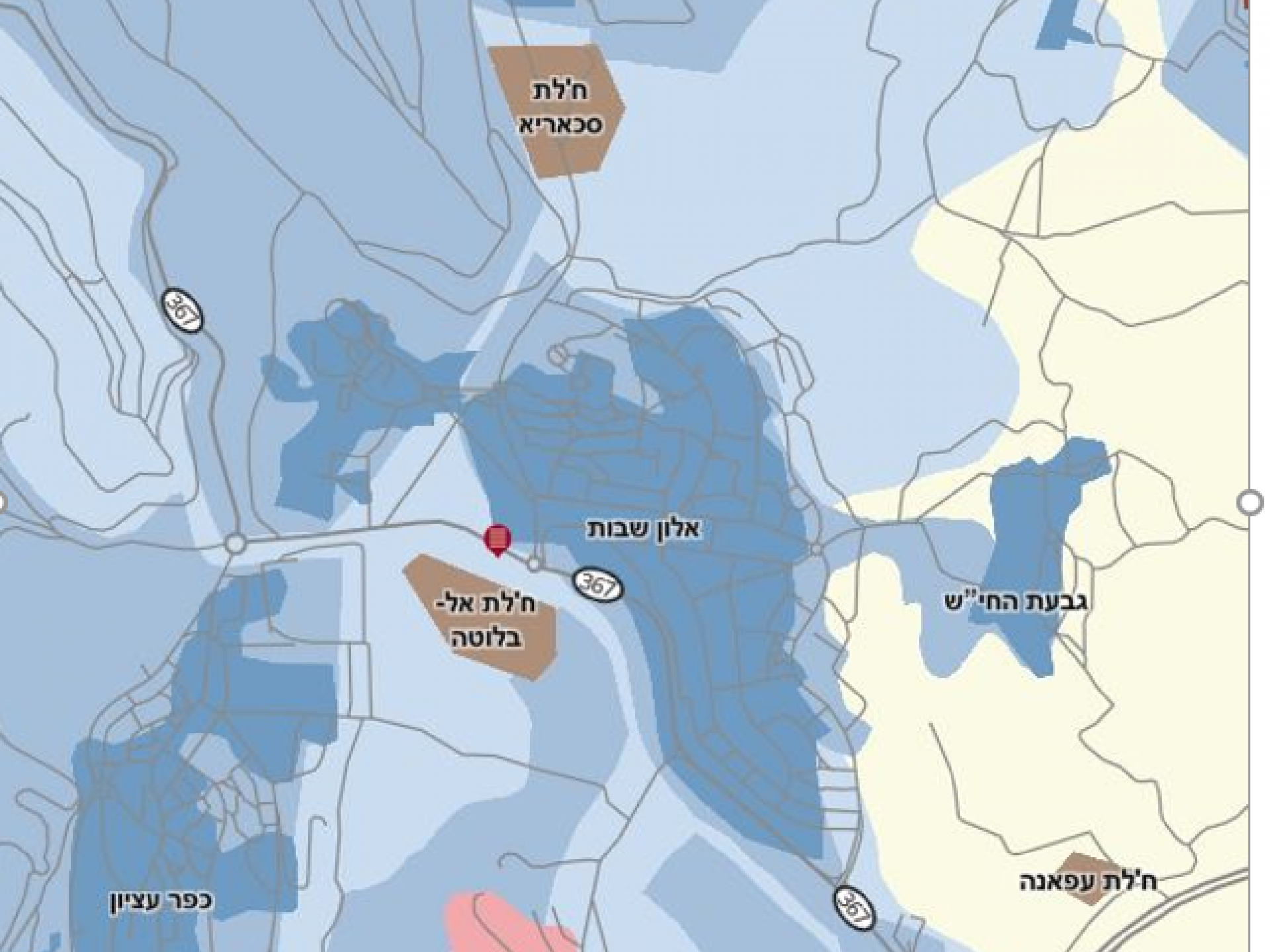 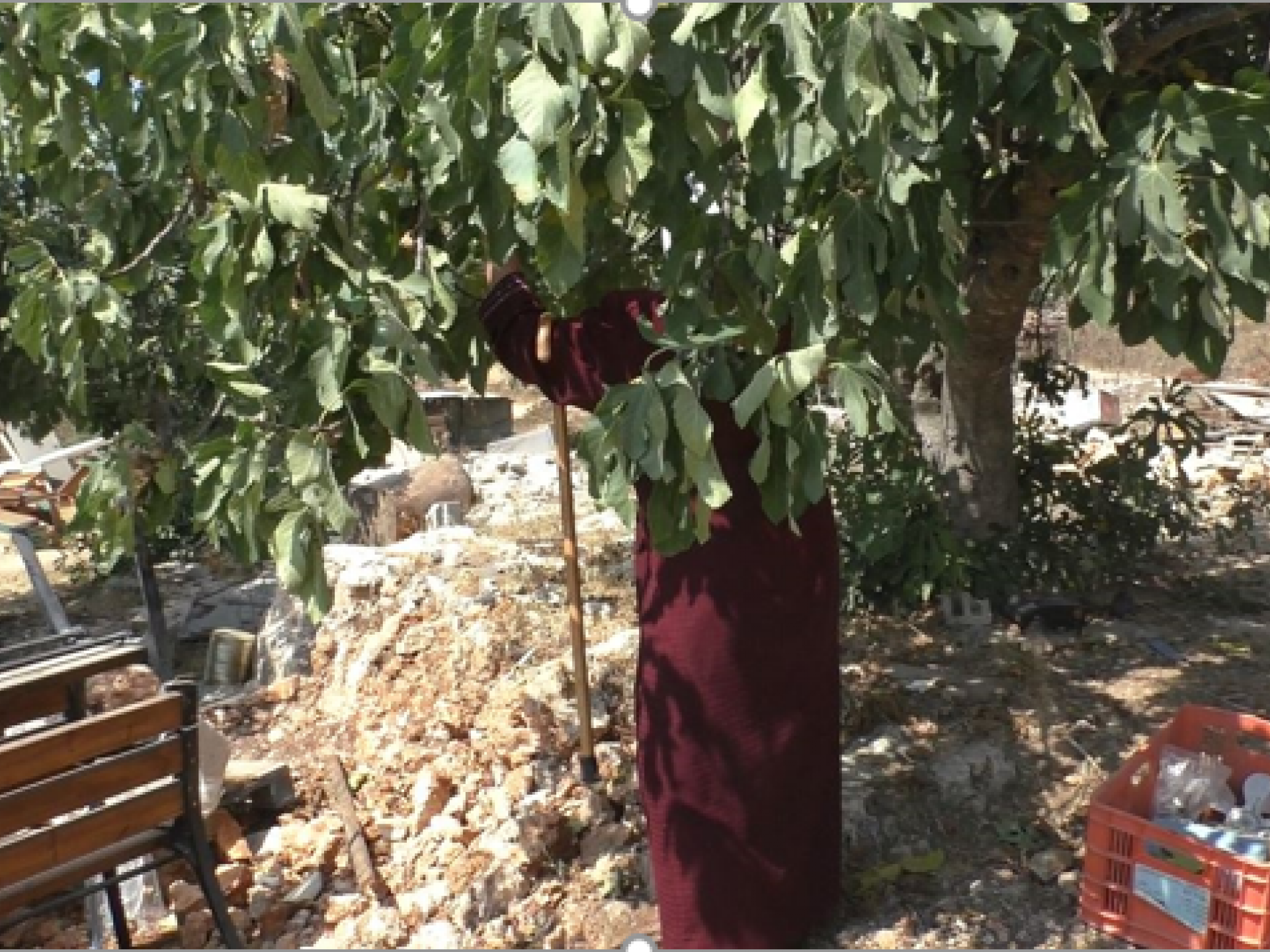 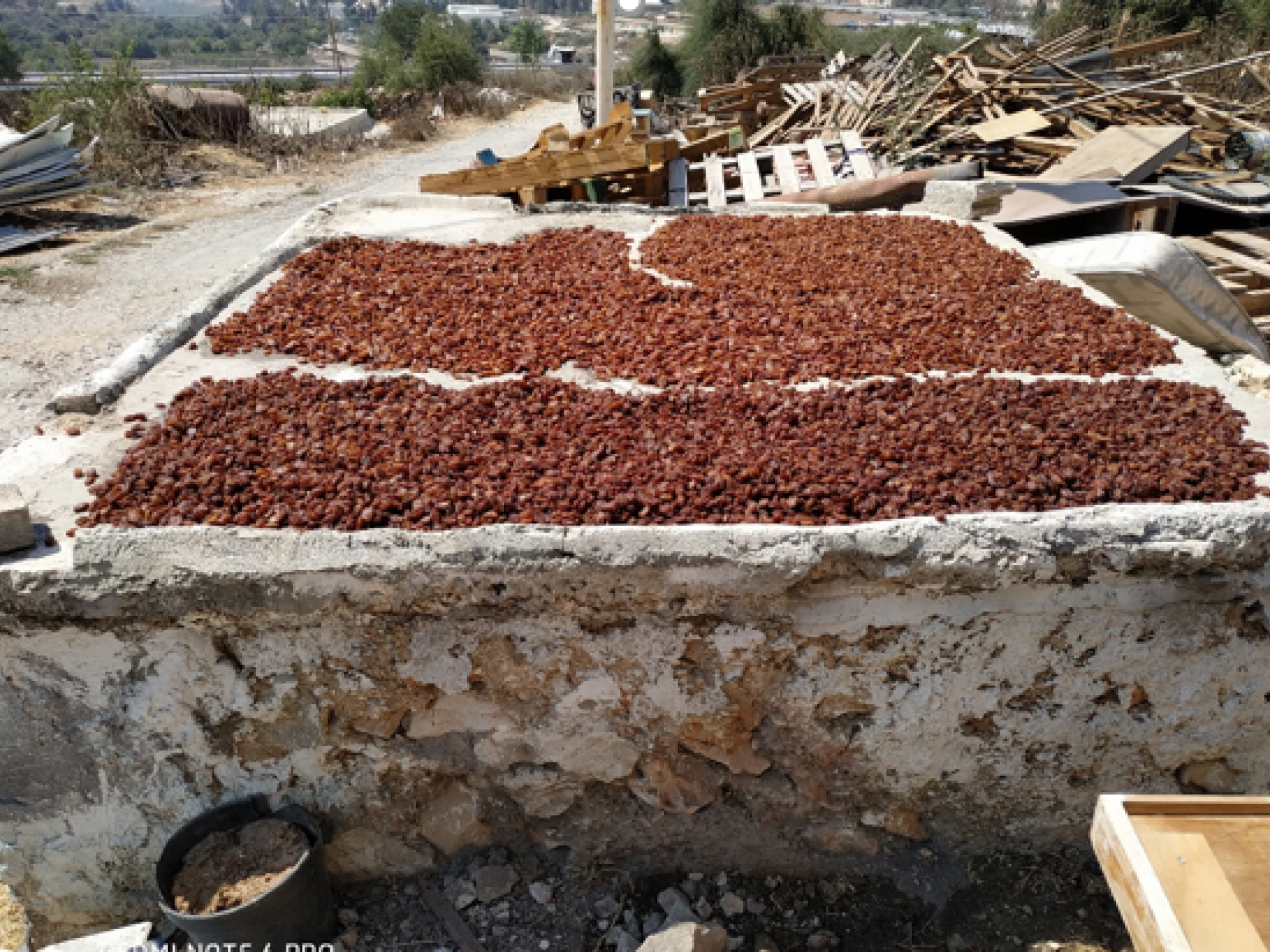 Grapes drying in the sun 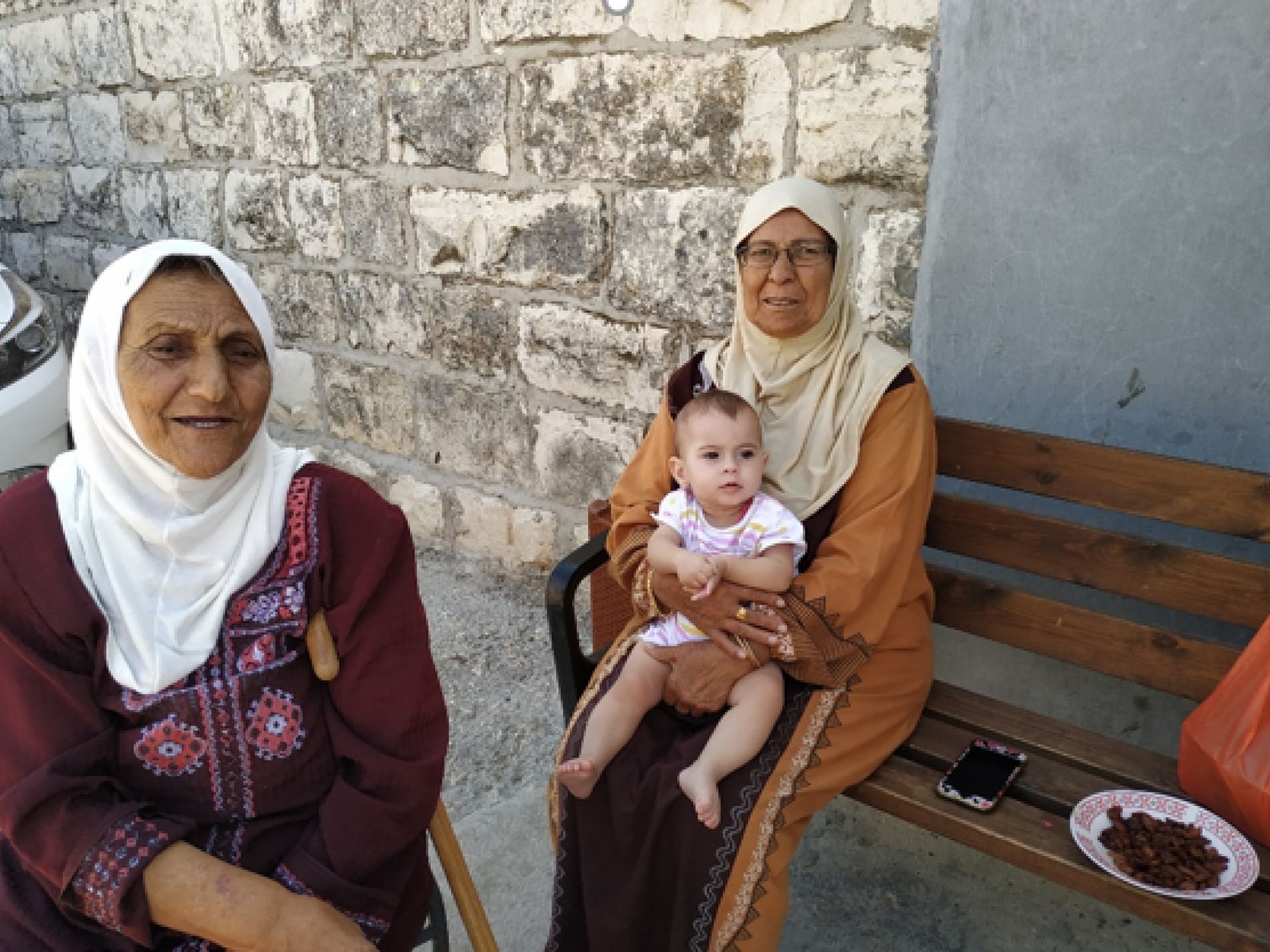 Women at the entrance to their home in Halat al-Baluta 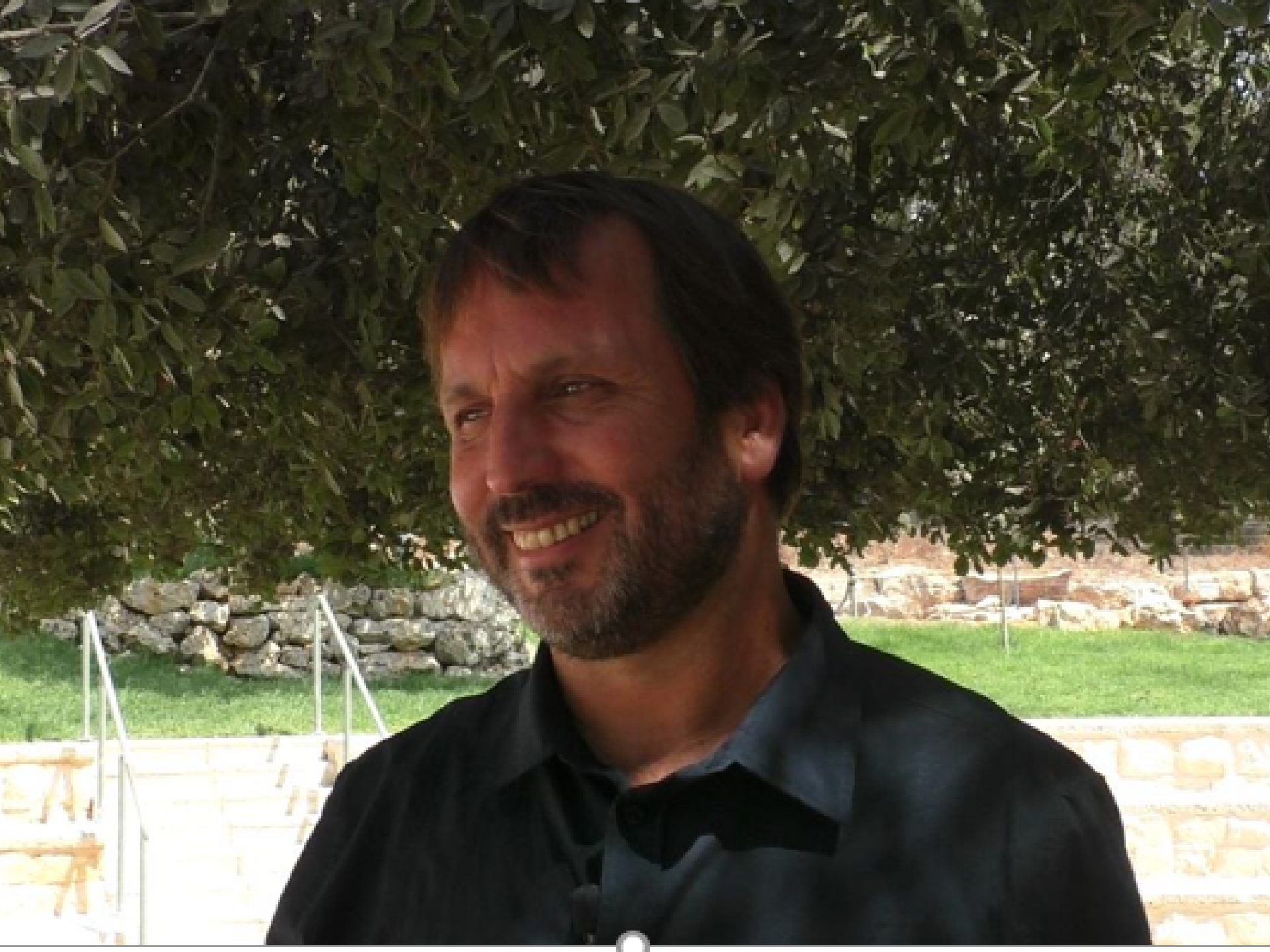 Halat al-Baluta is very near the Alon Shvut settlement, and named for an ancient, impressively large oak just across the road.  We were told in Khirbet Zakkariyya that the oak is located on waqf land, and is associated with the Nabi Zakkariyya maqqam.  The village is very small, adjoining the prosperous, flourishing Alon Shvut settlement.  A narrow road off the highway leads to the village houses.  Two women sit before a home, one holding a cute baby

.  Another woman picks figs from a nearby tree, and later offers us trays of figs for sale.  We sat talking with the women.  Immediately we were served large, semi-dried grapes, carob syrup and radish jam (a sweet syrup containing cut-up radishes).  Another woman brought a carton of various kinds of grapes from a nearby vineyard.

Two young women from the settlement passed on the nearby road and waved a greeting.  The Palestinian women told us there are no problems with the settlers.  They said their men work in the settlements.

A. begins with a very logical statement:  We’re suffocating.  The children see the massive construction at the adjacent settlements and ask:  Why are we forbidden to build?

About 50 families live in Khirbet Zakkariyya and nearby Halat Baluta.  They’re forbidden to build, not even add a room to an existing house.  Nor an additional classroom in the school.  Young marrieds must move elsewhere.  There’s no room in the village for an additional family.  One son moved to Al-Khadr but returns daily to work the family land in Zakkariyya.

Last Friday, we were told, there was a violent incident involving settlers from Elazar and Netiv Ha’avot.  They threw rocks at a famer working his land and tried to chase him off.  When he refused they called the army, claiming the farmer had thrown stones at them.  That’s how they try to frighten the Palestinians until they abandon their land and stop cultivating it.  If the land isn’t worked by Palestinians for two years it’s stolen and becomes State Land.

An interview with Alon, from Bamakom, beneath the ancient oak

We had arranged to meet with Alon Cohen Lipschutz, a city planning architect from Bamakom.  We wanted to hear about his interaction with the Civil Administration regarding building plans in Beit Zakkariyya.  We chose to speak beside the ancient oak, that will appear in the film clip we’re preparing about the Gush Etzion region.

Bamakom began working with the villages surrounding Bethlehem when Israel began to consider erecting a separation barrier that would imprison the Palestinian villages in small, fenced salient, which would have been a serious threat to the normal lives of the villagers.  Ultimately the fence wasn’t erected along the original route, but extensive, increasing restrictions still cause considerable distress.  In Nahalin, for example, a large village, whose access roads to its lands are blocked, and whose development potential is severely limited.

Thus the settlements continue to expand, while the area of the Palestinian villages keeps shrinking.

In the heart of Gush Etzion, in the area of the settlements, are a number of communities.  Halat Baluta, Halat ‘Afanna and Halat Beit Zakkariyya.  Each has its own interest in surviving, but all have a common interest in a joint struggle to improve their living conditions.

The historic Gush Etzion is located where we’re now standing, an area within a radius of perhaps one kilometer.  Attempts were made from the outset to take control of the entire region.  In a manner similar to what occurred throughout the West Bank, military orders were issued to take over land in an illegal procedure, because civilian settlements were built on the land.

The area of Khirbet Beit Zakkariyya was taken (expropriated) on behalf of the Rosh Tzurim settlement.  In 1969, two year after the Occupation, objections were raised to the action and the village was removed from the expropriation order because it contained a site that had religious significance (Maqqam Nabi Zakkariyya, built on the tomb of Zecharia, the father of John the Baptist, and the remains of an ancient church constructed in his memory).  And also because there was an existing village there.  In the 1980’s Palestinians attempted to regain the expropriated land.  H., from Beit Zakkariyya sued in the Supreme Court to establish ownership of an expropriated portion but the appeal was denied.  The plaintiff claimed that only 73 dunums had been sold to Jews but in fact the expropriated area was hundreds of dunums larger.

Residents still live in a limited area and are subject to many limitations, but they don’t face a threat of expulsion.  They are connected to water and electrical infrastructure.  But survival alone is insufficient.  Village families grow but the area allocated to them is not proportionate and is inadequate.  They are unable to build without a permit.  So frequent demolition orders are issued, and demolitions occur.

Theoretically, they can submit a planning document and on that basis build and develop.  No authorized plan currently exists.

Conversations over coffee in Al Khadr

We entered a small restaurant in town.  A young man, H., sat there.  We introduced ourselves as members of Machsom Watch and began a conversation.  His family (and others) own 21 dunums in the area of the Efrat settlement.  Yes, literally within it.  Next to the homes.  Their main crop is vines and they’re permitted to enter and work the land.  H.’s family are holding on to the land and aren’t tempted by generous offers to sell.  He said they’d refused millions of shekels that had been offered.  What would they do with the money?  The land is more important.  That’s what their father taught them.

There are also farmers whose land is located in the Neve Daniel settlement.  Even though these lands aren’t near the settlers’ homes, the farmers aren’t allowed to access them by vehicle, nor may they enter the settlement gate.  They access them through the fields, a distance of 3-4 kilometers, riding a donkey, apparently crossing Highway 60 by a passage under the road at Nashash junction.

As we spoke M. entered, an educated shop owner in the town.  In his youth he worked in a large cleaning company, under a female supervisor, and they’d been friends.  Or so he thought.  One day they were talking and she asked, “You could easily blow this place up, right?”  He thought she was kidding.  She kept at it.  “Yes, I’m kidding, but really, you could easily bring a bomb and finish us all.”  He insisted: Why should I blow up my workplace?  “Because you can,” she said, “How would you do it?”  Finally he played along with the joke, saying, “You come in the morning, I arrive earlier and bring a bomb…”  The next day he was fired and was blacklisted for two years from entering Israel.  That’s how he came to open his shop – the cloud had a silver lining.