12:30 - The checkpoint  at the Zeita-Jamain junction is open.

No delays at the Za'atra junction.  As usual soldiers are waiting at the hitchhikers' stop.

13:00 – Jalud.  Appointment with A., head of the local council, at his office in village council.

A new settlement named "Geulat Zion" is to be built on Jalud farm land. The violent settlements Esh Kodesh, Kida, Yishuv Daat, Ahiya and Adey Ad, some of which were built on Jalud land, are to be ratified. The village intends to launch a legal fight to keep its land. The first step will be their demand to evacuate "Adey Ad".

A., head of the local council, is worried. He describes how the villagers have been robbed of their land in a slowly ongoing but consistent process throughout the years of the occupation. In 1978, land was confiscated for military purposes and also to build the Shiloh settlement. Since then, and especially during the last 15 years, some of the most violent settlements have been built around Shiloh and thousands of dunams of farmland have been confiscated from the surrounding villages. The Palestinians are being robbed of land which they have been working for generations under the pretext that this land belongs to the state.

85 % of Jalud's land is in area C. The villagers are afraid that all this land might be taken from them. A. claims that the authorities confiscate the land due to military needs, or they declare it state land in order to prevent the land owners from opposing the confiscation. He complains about the fact that private land owners are prevented from reaching their land under the pretext of security needs. And when the land is not cultivated the settlers take possession of it for their private needs.

A. is concerned about the massive building projects in the settlements. "This is a very large project", he explains, "5 settlements: Adey Ad, Kida, Esh Kodesh, Yeshuv Hdaat and Ahiya are to be ratified in accordance with the government resolution of 12.10.15."

He shows a map illustrating the expansion of the settlements on Jalud's agricultural land in area C. The blue areas have been confiscated under the pretext that they are state land.The green land between them is private land that cannot be reached due to security reasons. These areas are being controlled by the settlers who cultivate approximately 2000 dunams of this land.

Moreover, in accordance with the decision of Israeli authorities the illegal settlement, Gulat Zion, is to be ratified. On the map this settlement is colored pink. The plan is to build 139 housing units. The settlement will extend over a large area and will connect between all the settlements in such a way that at the end of the project the "Seven Hill City" will have been completed, even though the "Ten Hill City" already exists.

Picture 1. Settlement map: The settlements (blue) in the Jalud area. The yellow stripe marks the road. The pink area is intended to be a new settlement named "Geulat Zion" which will connect between the "Shvut-Rachel" settlements and Shiloh. 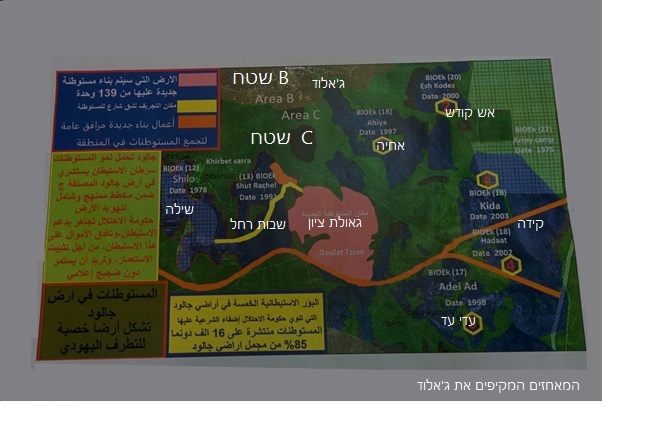 Picture 2.  The Achiya settlement seen from the roof of the local council in Jalud. The settlement's buildings are bordering on the houses in the village. 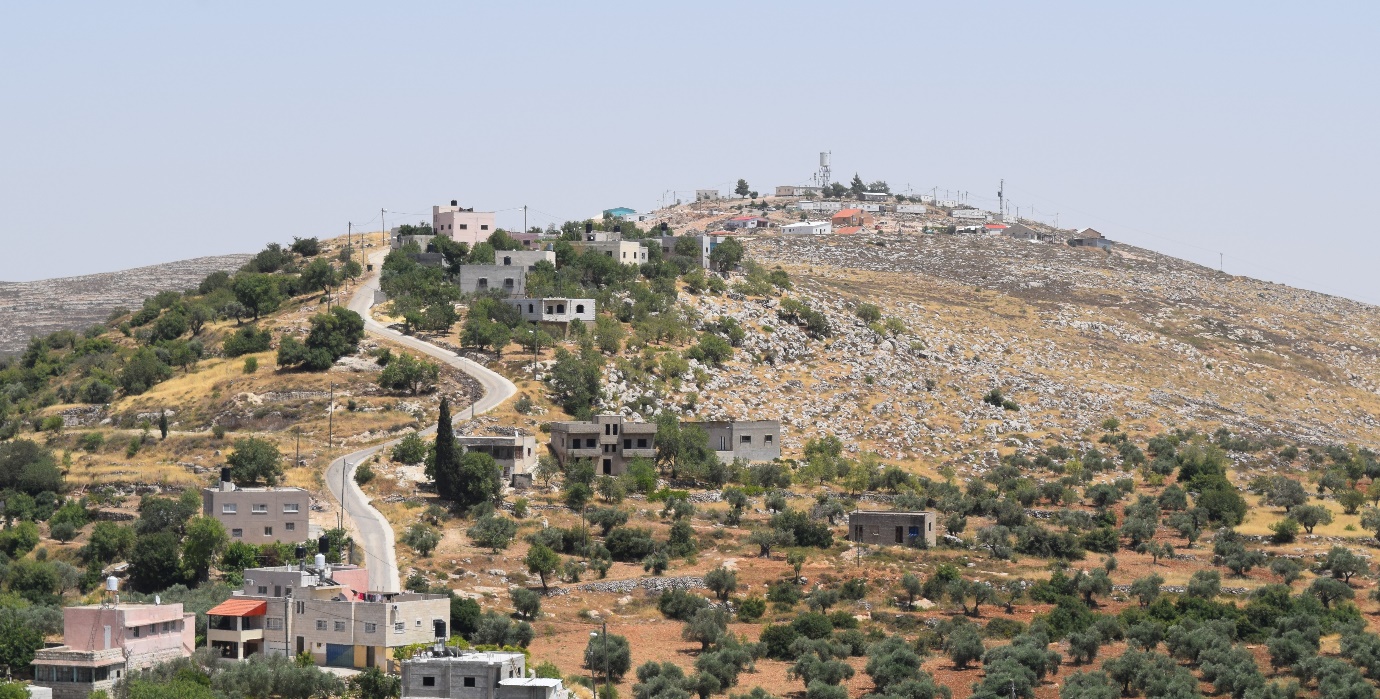 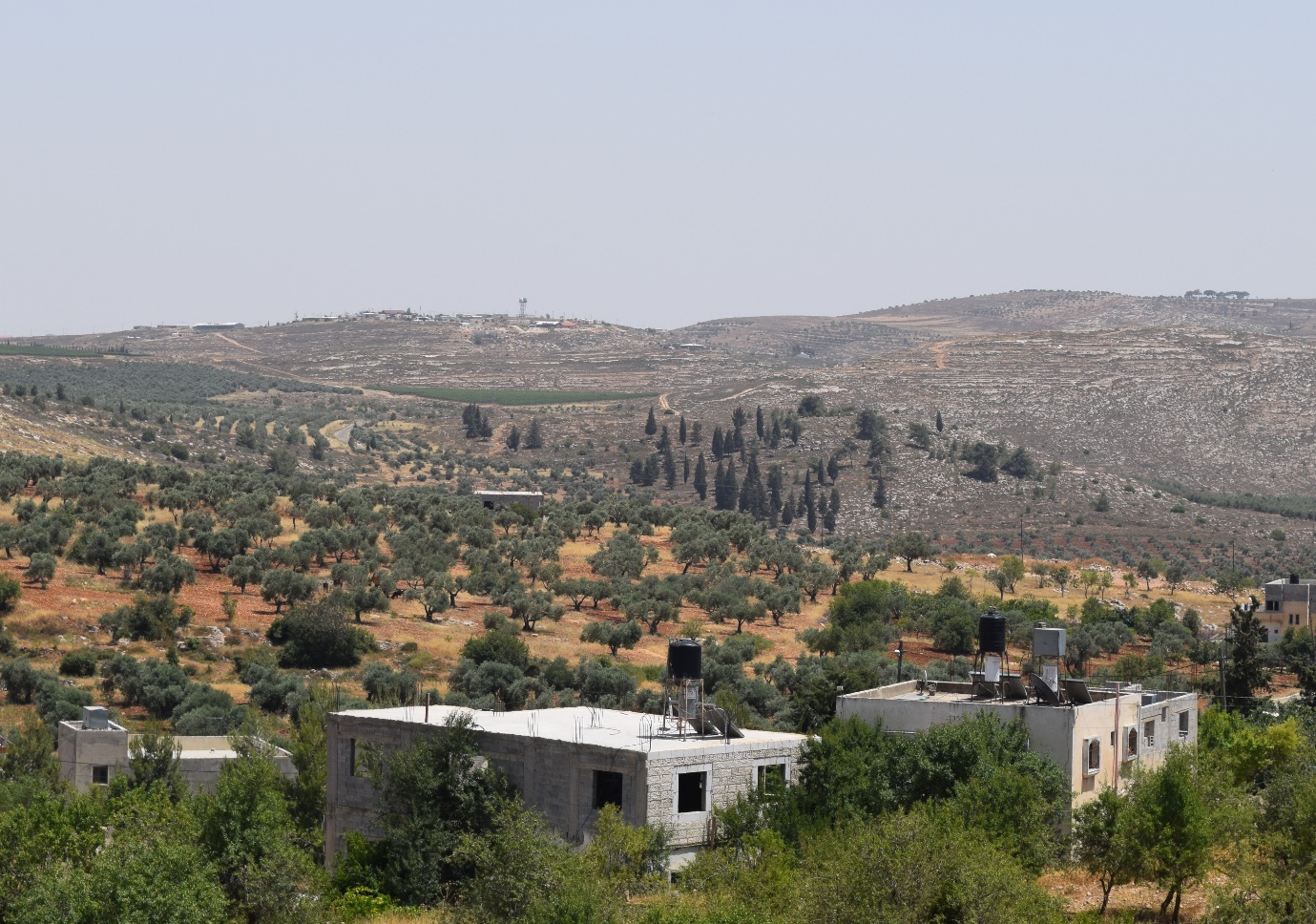 Picture 4. The houses in the Adey  Ad settlement can be seen on the mountain ridge.

Jama'in is a small town, with some of the best quarries in the area. The stone is sold all over Palestine and Israel and even outside the country. The city also has an industrial area. Although they are close to the Ariel and Tapuach settlements, Jama'in farmers have no daily problems with settlers. Harassment occurs mainly during the October harvest season - the settlers sometimes try to drive the farmers out of their plots. Jama'in has its own info-icon water reservoir tower. The water is obtained from sources and paid for by the Palestinian Authority. The city has one clinic that opens only 2-3 days a week. The biggest problem is that there is only one hospital in Nablus in an area of ​​about 10,000 residents. This hospital is too small, does not have enough equipment, and not enough doctors.

Zeita is a village of about 3000 inhabitants near Jama'in and Ariel. In the 1980s, land was taken from the village and transferred to settlements. Farmers in the village have lost some of their income. The settlements are located on the ridges, further away from Zeita, which is in the valley. The village does not often suffer from harassment.
The water sources for Zeita and Jama'in that have supplied water to the villages for centuries have been confiscated by the Mekorot company and the water is flowed to Ariel. Without a reasonable info-icon water supply the villages cannot develop agriculture or any industry.
The electricity comes from the Israeli Electric Company through Ariel and Jama'in.
The IDF oversees the main roads and entrances to the villages.

In the center of Za'tara Junction, a permanent sculptured sign