Fassail – at times I feel I have already seen everything and nothing can knock me out, and then the occupation lands another blow and it is more and cruel than the last one. And I think, “These soldiers, after all, they’re my neighbors’ children, my friends’ kids, they are charming youngsters, good, well-mannered – where does all this brutality come from?” 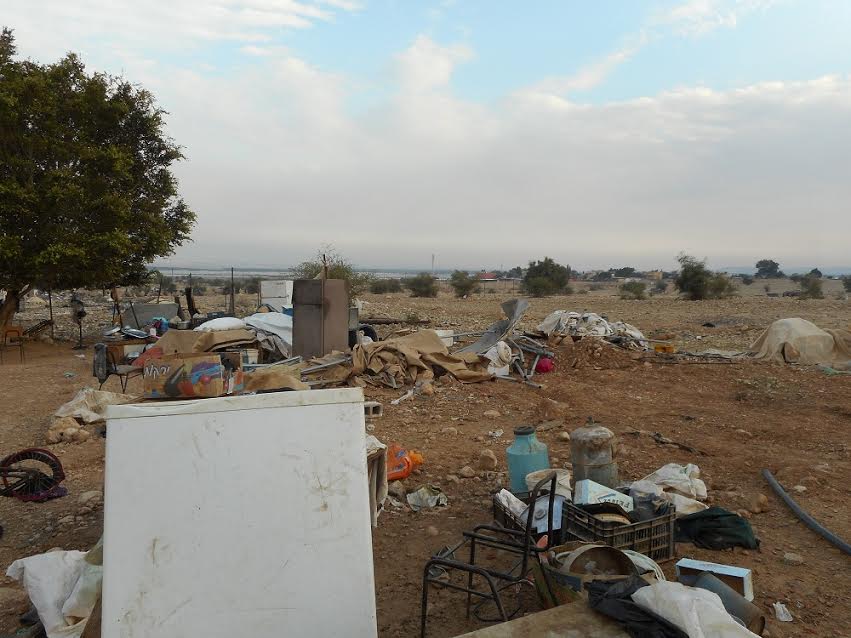 On Tuesday the army demolished the homes of Ibrahim and his six brothers (two tents and a tin shack). This is the fourth time they have undergone demolitions in the past year and a half. Once again – all their belongings are thrown about outside, and again that persecuted look in Ibrahim’s eyes, and again the crushed rods that served as a home. And this time the soldiers also had fun dragging the refrigerator for several meters until it was ruined. And worst of all – Zayid, the eldest son, tried to salvage the tent, took the tarpaulin and began running away with it. But no way – or fine young soldiers would not let that happen!! They chased him, and as they caught him they cut this miserable tarpaulin into strips, so Ibrayim and Zayid and Zakariya and Mohammad would not be able to use it for shelter from the rain, God forbid. In total: seven persons, four of them children.

We began driving home, but stopped at what used to be the home of Abed Al Hadi. It was getting dark, the wind blew fiercer and then it started to rain. We found all ten family members (four adults and six children) running around a campfire, trying to warm up, and around them - absolutely nothing. Not even nylon sheets! For two nights already, they have been sleeping outdoors with no shelter, no roof, no security or privacy provided by four walls, even if made merely of cloth or tin. Whoever has seen the hollow look in their eyes, reflecting the helplessness and confusion of the homeless, could never understand. And even if so, it would be merely a partial understanding for – after all – we have a home to go back to.

Moran, Natanya and Varda stood there stunned. One could feel the shock at the sight of this miserable family. Then they got themselves together, drove to Al Ujja, and with all the money they had on them, bought a small tent for four, hoping that with some effort at least the children could get in. But… the wind and the rain and the dark prevented them from pitching and finally everyone lay down on the ground underneath the un-pitched tent that protected them from the rain. Tomorrow they will pitch it.

(This report is not written in any chronological order, but by the force of the events).

Here is what we witnessed in the morning:

10:15 – Hamra checkpoint which had not been manned recently, is now manned. Only one lane is open to traffic, so whenever cars go through in one direction, all the cars on the other side must wait. The cars and their passengers are not inspected, so we ask, why the physical restriction? And the answer, just like the next segment, is as usual – a demonstration of force. May the Palestinians see us and fear us.

Apparently the army is getting ready for another war! The number of tanks (over one thousand) and other war machines I saw here today is unprecedented. Some of them are already being removed after three days of maneuvers, and long convoys of loaded tank-carriers stand by the roadside. The soldiers hang around with their war paints and ridiculous camouflage helmets, merry as clowns.
All this while the fields of Fassail have been trampled, ravines which have finally begun to show some flow of water have been filled with dirt by the D0 bulldozers, and the whole area is covered with new furrows and paths which will not enable the Palestinians inhabitants to use them. On the hilltops stood tanks and fired shells over the heads of the Palestinians from Al Malih to Ras Al Ahmar. At 15:00, when we were southbound to Fassail, we still heard the shells being fired.

We drove to visit at Al Hadidiya. Months ago the army blocked the gravel track which Abu Saker and Taayush volunteers had prepared, a track that enabled the children to access their school and their parents to reach civilization. Now the bus leaves the children on the road and their older brother comes to take them home with the tractor. Eight children (including the neighbors’) dangerously hang onto the tractor’s sides because of occupation cruelty. Abu Saker’s family is seeing tough times. He himself is ill, his wife underwent bypass surgery three months ago but her condition is serious and one can hear how short of breath she is as she speaks. Abu Saker’s grandchild died as a 7-day old baby

, of an apparently congenital condition, and they fear that the pregnant daughter’s unborn child also suffers of that same condition. Life in the Palestinian Jordan Valley is naturally tough. The occupation, in such a situation, can definitely end it.