We obtained a signature from a Palestinian at Sylvia’s request, and bought olive oil from Musa.  Everyone who visits the area is invited to buy fresh olive oil from him.

We unloaded parcels at Z.’s shop and wished him success on his surgery tomorrow.

On Highway 5506, from Tulkarm via Kafr Sur to Funduq, we discovered a small village we’d never visited.  In the village center there is a group of large structures dating from the 18th century, called “the citadel.”

The fortress comprises some five abandoned buildings, two of which are partly inhabited.  Residents say the village was founded 500 years ago. 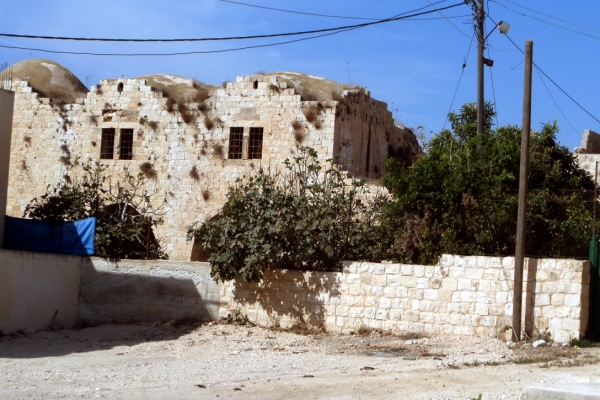 We meet B., who owns a grocery, and over tea are told about his family and the village.  It has some 300 inhabitants, most of whom work in Israel.  Since no settlements are nearby, the army doesn’t harass them.  Everyone owns land and they make a living from agriculture.  There a school for boys and girls.  He says his four sons built apartments above the grocery.  His wife lives in Jaljulya with their four daughters.  She can visit him, but he’s blacklisted and can’t visit her and his daughters.  He’s worked in construction in Netanya since he was 16, and speaks Hebrew.

Tractor owners wait for the checkpoint gate to open.

A sign is posted, but there’s no information about the opening hours.

Two tourists accompanied by two Palestinians from Jayyous touring with them come toward the gate.  The soldiers approach them and ask one, a physician from Florida, to delete the photos he took.  The young man from Jayyous tells us he’s an engineer, is unable to find a job and intends to go to one of the Gulf states.

The gate opens at 13:20. Only two people on tractors go through. The five soldiers wait, and we leave.

14:00  A military jeep at the entrance to ‘Azzun.  The soldiers stop vehicles for inspection.  The cars are detained.