Settler-colonist  violence totally backed up by the Israeli army 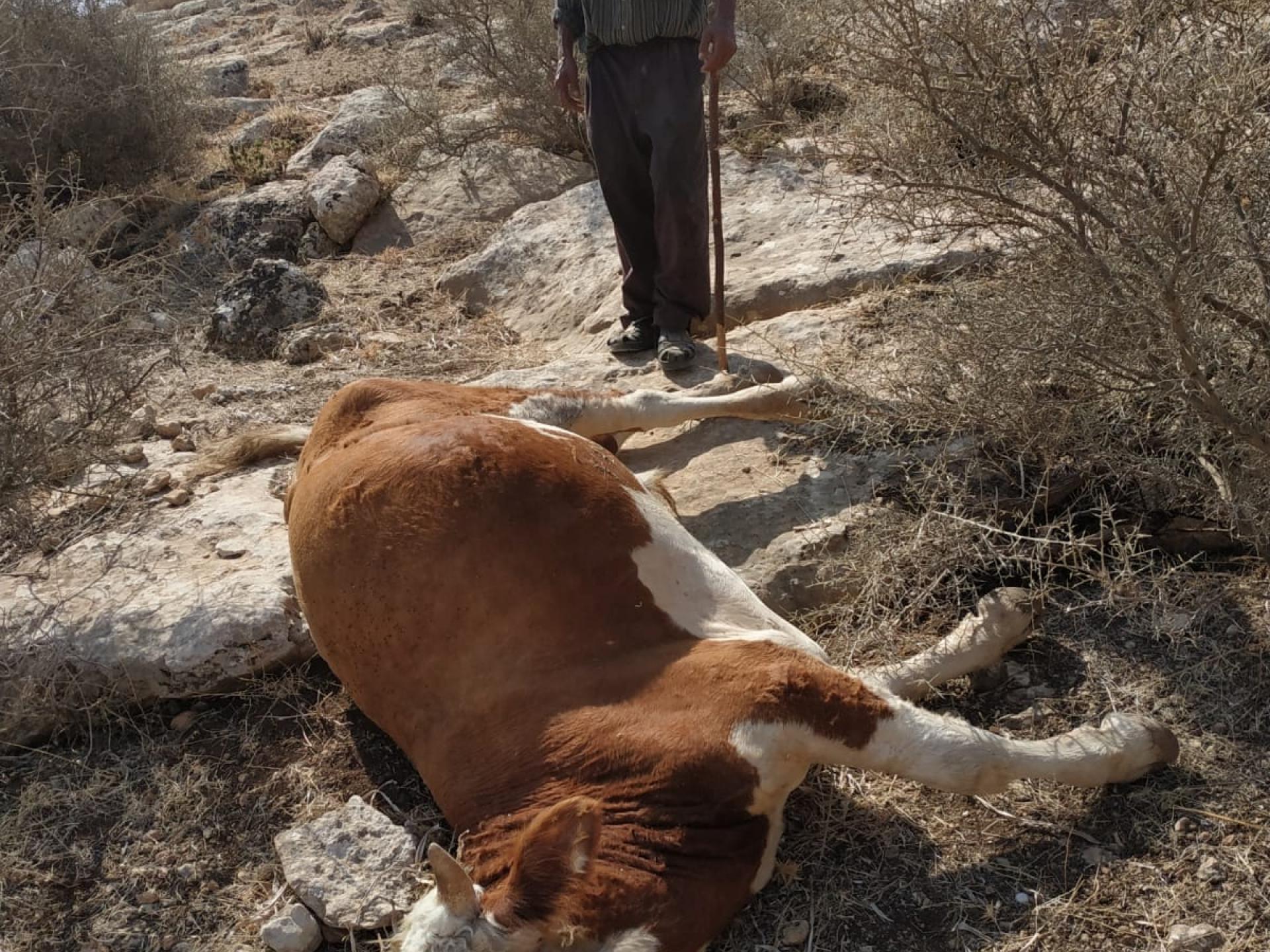 el Hadidiya: one of the cows that were killed by the army
Photographer:
Rina Tsor

Eviction of Palestinian shepherd communities on grounds of military maneuvers

On Wednesday, September 4, four families of Umm Jimal were ordered to leave their homes because of military exercises held in the area – all families and livestock from 4 p.m. until 10 a.m. the next day, namely to spend the night outdoors as well. The order arrived in short notice, just one day ahead, and the families had no time to actually prepare. As usual in such cases, no accommodations were provided for them, no transport, no shelter, no night lighting, nor water etc. Just have them leave. Imagine what would happen were such an order issued Jewish settler-colonists. The whole country would be in an uproar. But the transparent Palestinian shepherds of the Palestinian Jordan Valley?...

That same day, F. and his son of the neighboring community at E Al Hilwa went out to pasture with their cattle. Suddenly bullets began flying all around. The forces that fired live ammunition that day were infantry, tanks and helicopters. The Palestinians could not see who was firing around them. The father and son were extremely scared and hurried to find shelter. Luckily they were not hit. But two cows and a bull were killed. At the sound of the shooting more people arrived as well as an officer of the unit active on site, who said it was not his job to look into this, and that they should turn to the Civil Administration.

Damages are estimated at over 1000 shekels. Chances that anyone would reimburse the family are nil, as far as my experience goes, even if he was not warned nor knew of these maneuvers so close to his home.

Almost every day in recent months the settler-colonist of the Umm Zuka outpost and the ‘hills youth’ working for him threaten shepherds of Khalat Makhoul and Hadidiya. They attack the shepherds, chases them away with their flocks, do not refrain from hurting sheep, and are always armed. At times they even summon the army so that soldiers arrive from one of the neighboring bases. The soldiers come as a policing force and the question is which side are they on? The shepherds are no lawyers. I believe that legally the settler-colonists have no right to chase shepherds out of their grazing grounds that do not belong to anyone. Usually the soldiers do the settler-colonists bidding and chase the Palestinian shepherds away, which is why the shepherds need Jews to accompany them, Jews able to confront settler-colonists and the army. In apartheid country it’s your ethnic origin that counts…

Volunteers of Tayush and Combatants for Peace are there accompanying the shepherds nearly daily, among them also our friends Mickey, Daphne and Nurit (please excuse me if I forgot anyone). Thus they enable the shepherds their livelihood, which is meager to begin with.

Arrest of a Hadidiya shepherd for no reason

On Friday, September 7, at 11 a.m. soldiers – apparently summoned by the Jewish settler-colonists – came and arrested H., a Hadidiya shepherd. They took him to the army base at Umm Zuka. The flock remained without a shepherd. Luckily its Taayush accompaniers were there, and the soldiers told them he was arrested for not having his ID with him. One of the accompaniers drove to bring the ID but then they were told that H. would be released only at 5 p.m. The accompaniers called an Israeli lawyer that helps Palestinians in trouble, and he asked to speak with the commander. H. was released immediately.

This is another case in a chain of daily events that the settler-colonists of Umm Zuka cook up. Their point is to make the lives of the Palestinian shepherds in the area miserable enough to eventually leave. It’s a war of attrition whose end is not in sight.

Apparently the settler-colonists do not stand alone – they are fully backed up and supported by the Jewish regional council (we see its representatives there right after the outpost was first put up) and who knows how many other public bodies.

At the checkpoints today activity was quite extraordinary:

Zaatara Checkpoint at 10:15 – a police vehicle stood and blocked the road leading to Huwarra. When we crossed no Palestinian vehicle was seen there.

Hamra Checkpoint – 15:30 – inspections of vehicles bound for Area A.

Maale Efrayim Checkpoint – 15:50 – four men and women soldiers inspecting vehicles leaving the Jordan Valley in the direction of the West Bank hills. A Palestinian vehicle held for inspection by the roadside.