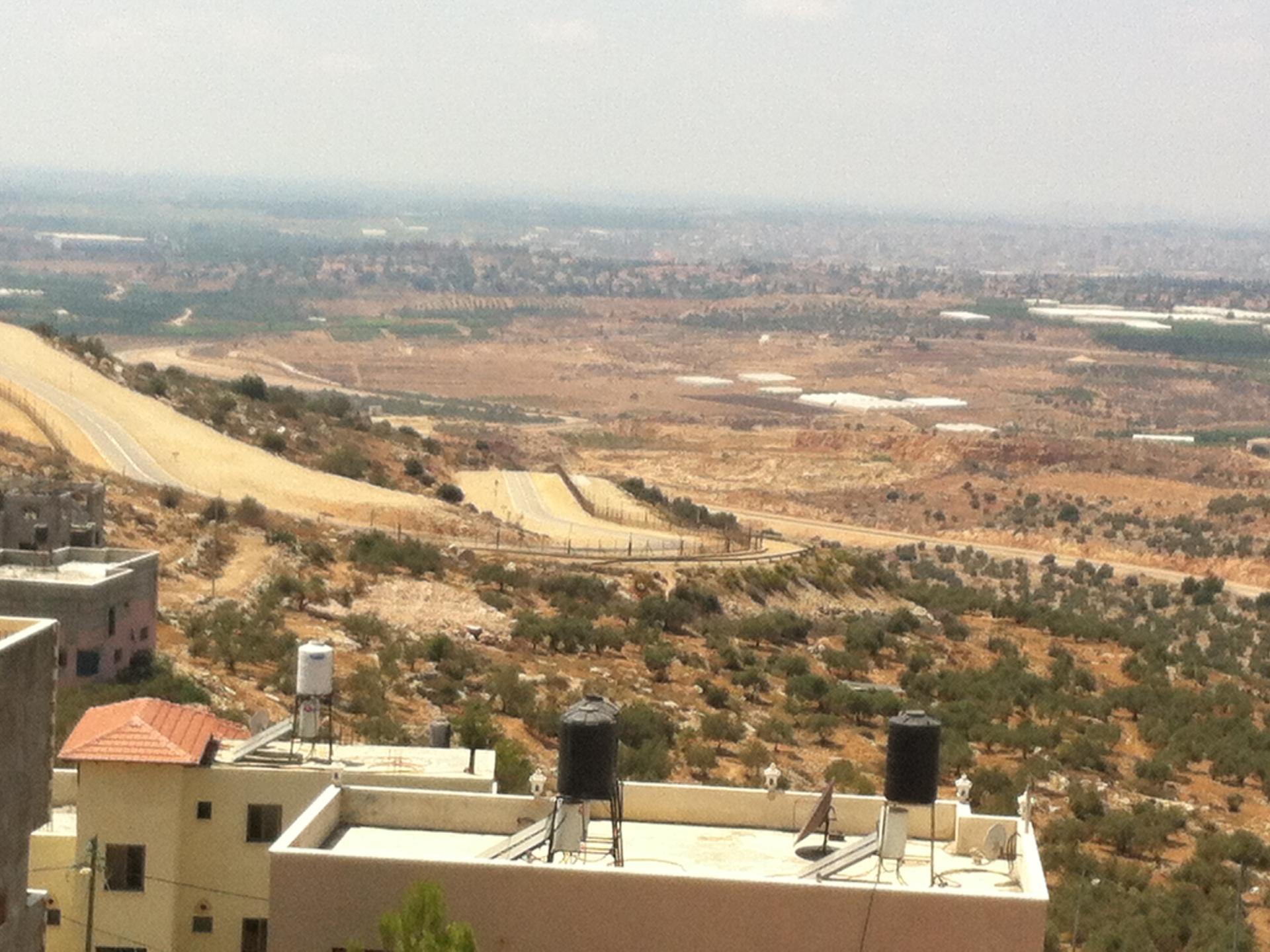 Jayyus - The view over the fence
Photo:
Karin L. 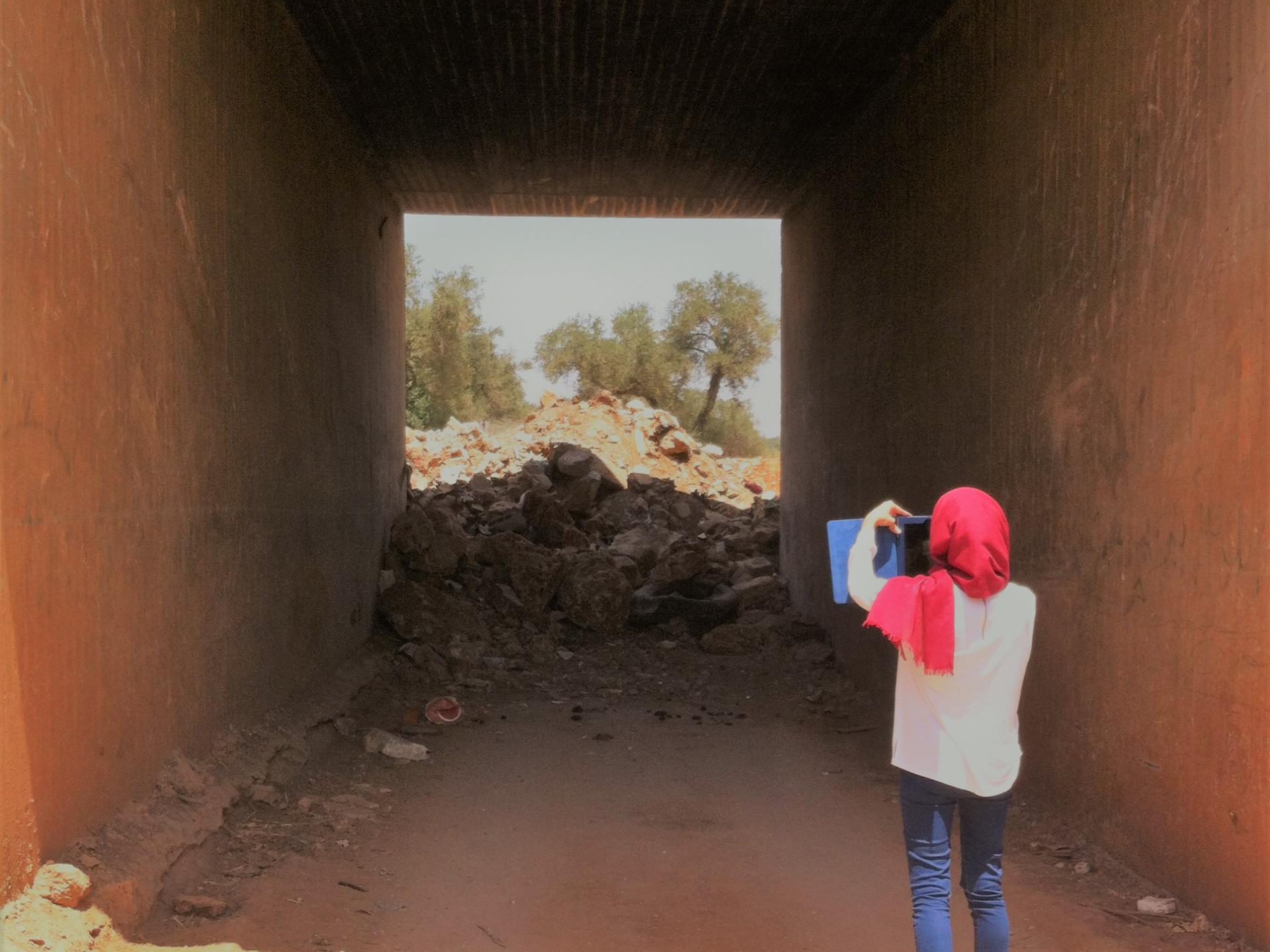 The blocked passage underneath the bridge on Route 55
Photo:
Karin L.

In Azzun, the Israeli army has blocked the road passing under road 55, leading to the villagers’ farmlands north of the road, thereby denying them access to over 1500 dunams of olive and fruit tree groves and greenhouses.

The army has taken a building and uses it as a lookout position.

Since the end of May, 71 farmers of Jayyus village have applied for permits into their lands located inside the seamline zone. Only 15 of them have received such permits, and 12 of these had to re-apply with new forms issued recently. All the rest have not received answers at all. It is all  a r b i t r a r y.

11:30 – an army vehicle positioned at the entrance to Azun’s access road from road 55, up the hill, in front of the main entrance to the village.

Azzun – after unloading our vehicle at Z.’s, we met H.S. at the Azun local council. To our question why an army vehicle stands at the turnoff from the main road, we were told that nowadays the army is everywhere. It has lookouts on top of the water tower. In addition, the army conducts its “straw widow” procedure. Indeed, in a house that is not yet populated, but the army has prevented completion works there, and the family was forced to rent another home in the meantime. He showed us the edict for sequestering property for ‘security needs’ issued on June 24 for 3 days, which the army constantly re-validates. According to this edict, the owner of the property may request compensation, which he does not intend to do in order not to legitimize this theft.

As for access to lands: there is a road leading eastward from the center of Azun to farmlands all the way close to Maale Shomron settler-colony.  That is where H.’s land is located, and a high fence was erected there several years ago, on the outskirts of the colony, with a large gate. According to H., the gate no longer exists, only a fence without any openings. In order to reach his land he now would have to go through the settler-colony, which is of course not possible.

Worse yet, passage under the bridge of road 55 to the lands north of the village is now blocked with boulders and dirt. The barrier – 2 meters high – prevents passage to over 1500 dunams of olive and fruit tree groves and greenhouses lying all the way to Laqaf village. The villagers are asking for help!

M. is the uncle of Mahmous who was shot by Israeli soldiers over a week ago. He tells us that the children are used to play and have barbecues out in the field close to the Separation Barrier. They saw no one around there when suddenly from behind the trees soldiers emerged. The children began to scatter in different directions and Mahmous was injured in his leg from their gunfire. They waited 45 minutes until an ambulance could carry him to the hospital.

About the seamline zone: M. has precise lists – 10 pages full – of names and dates of the applications for permits which he submitted since the month of May. 71 applications, only 15 of which have been met. None of the others have been answered, neither positively nor negatively, except for 12 who were required to re-apply on newly issued forms which are no basically no different from the old ones. Among the applications, M. marked 7 that are for his own family members, from various dates. None of them has been answered yet.

The few permits that were issued are for 3 months, 6 months, one year or two, depending on luck or the age of the applicants. Everything is arbitrary, as usual. M. maintains daily contact with the DCOs, to extricate permits. He spoke again of the problem of farmers whose lands are adjacent to the village but the previous checkpoint has now become a seasonal checkpoint, forcing them regularly to travel all the way to Falamiya South (935) in order to access their lands and work.