Burin - From the North will come Evil.

From the North will come Evil...

The attacks of the settlers on the home of Abrahim Ali 'Id, which is at the northern end of the village, near the settlement of Har Bracha and the outpost, Giv'at Ronen:  They began, the owner of the house tells us, because they took possession of the land many years ago and began to build their house in 2011. Since then, the soldiers began to frequent the house and take photos of the rooms.  Their property spreads over several dunams to the north of the house.  But the army contends that this is a closed military zone, so that they do not dare to work the land.  During all these years, as a routine, the settlers from Har Bracha and Giv'at Ronen descend upon the house, some of them in army uniforms, and attack it, usually with stones.  If someone goes up to the roof in order to hang out laundry, they throw stones on him.  After a while, the army also arrives, and then the settlers disappear.  THe windows of the house are protected with a heavy screen and surrounded with security cameras.  However, on Shabbat, 6.8, an especially violent, serious and dangerous thing happened.

One of the sons recalls:  On Shabbat my brother and I were alone in the house.  Suddenly, at about 16:30, we heard noise outside.  We opened the cameras and then we saw the settlers throwing stones on the house.  There were about 20 of them.  We hid in the house, and the throwing of stones continued.  Luckily for us, the windows were heavily screened.  After a little while, the youth guard of the village arrived.  The settlers began to withdraw, while still throwing stones on the youths.  A conflict started  while the settlers continued to withdraw, throwing stones.  At a certain point, soldiers, accompanied by dogs, arrived from the nearby base and, when they saw that the settlers were in trouble,  they backed them up and began to throw shock and smoke grenades at the house and to shoot rubber bullets.  We hid in the house and watched what was going on by means of the cameras.  Meanwhile, windows on the upper floor were broken, the smoke bombs penetrated through them and we began to choke from the smoke.  The youth guard of the village had no choice other than to run away from the grenades, the bullets and the dogs who were chasing them.  The settlers, when they saw the backup of the soldiers, increased the throwing of stones.  After about 2 hours, the settlers left, but the soldiers continued to throw smoke bombs,  The soldiers left, in the direction of the settlements only about 19:30.

The attacks on the house happen almost every day.  The family lives in constant fear.  They always sleep with one eye open.  The women practically do not sleep at all and they fear going to the bathroom alone, but need someone to accompany them.

When the settlers succeed in breaking a window pane they start dancing and going crazy with joy.  When one of the men goes up on the roof to take down laundry, so it won't get burned by the smoke grenades, a shower of stones is aimed at him.  He is lucky not to get injured.  We went up to the top floor.  The northern window was broken and there were pieces of glass on the floor.  On the roof, dozens of large stones lay all over;  any one of them was able to kill someone.  The life of this family is not a life.  It is impossible not to think of those Jews who suffered in the pogroms that took place in Europe with the tacit support of the governments, with no savior.  Those soldiers who are called the IDF - Israel Defence Forces - or are the the Forces of the Settler Pogroms?  While I am writing this report, I got a phone call from Ali 'Id, the owner of the house, about the renewal of attacks.  What can we do?  Where can we turn? 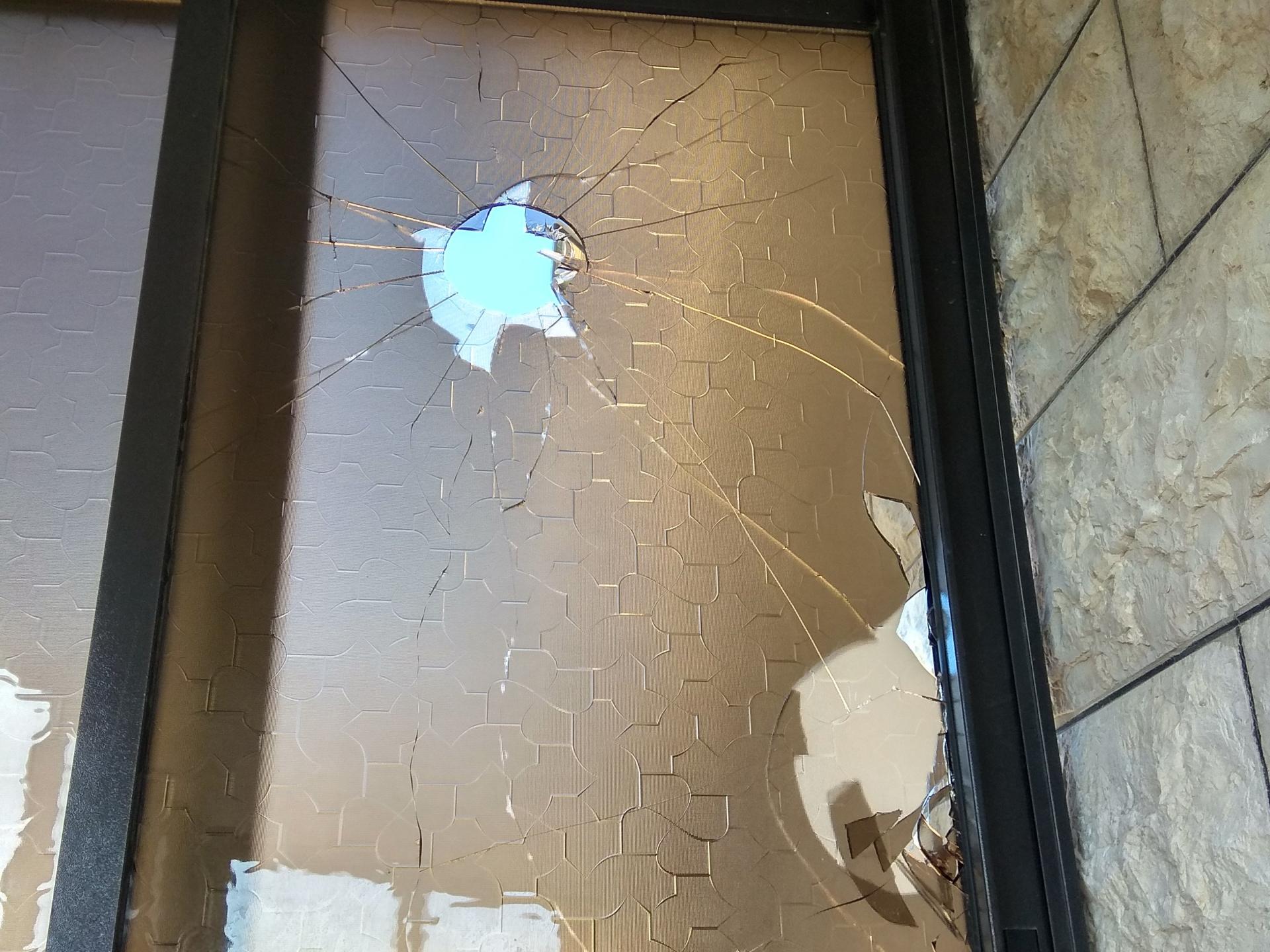 The north window broken from the stone's throw 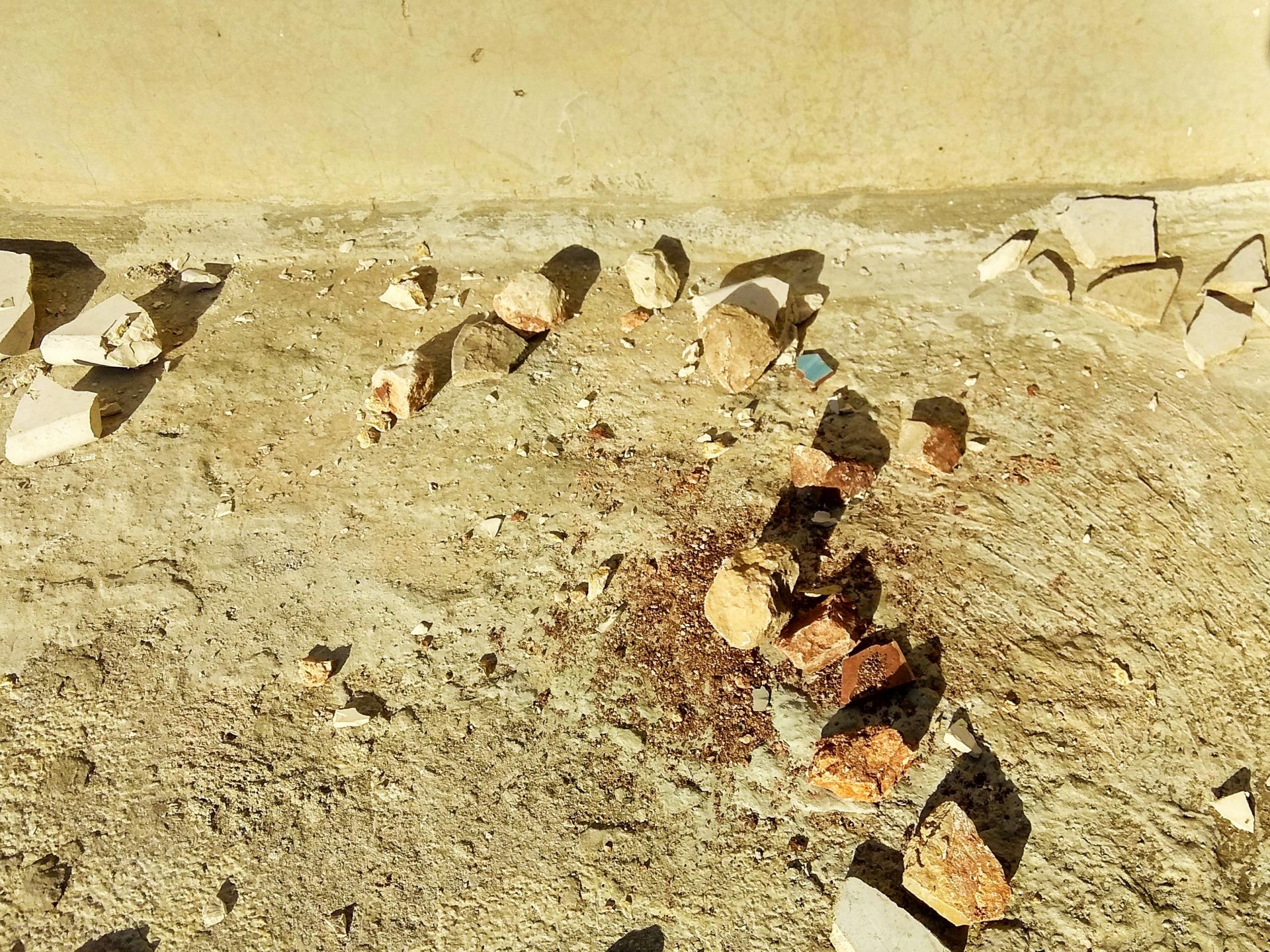