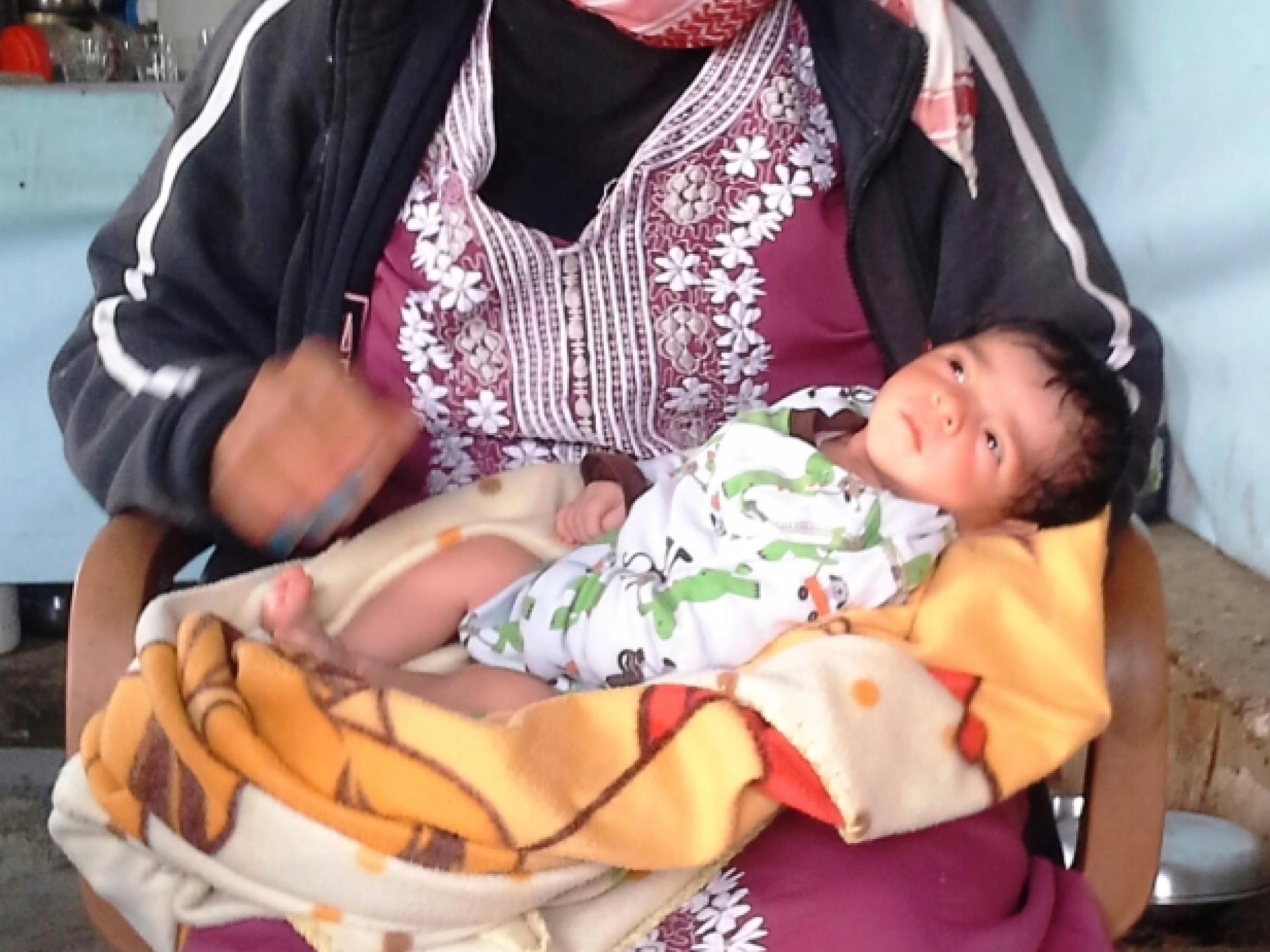 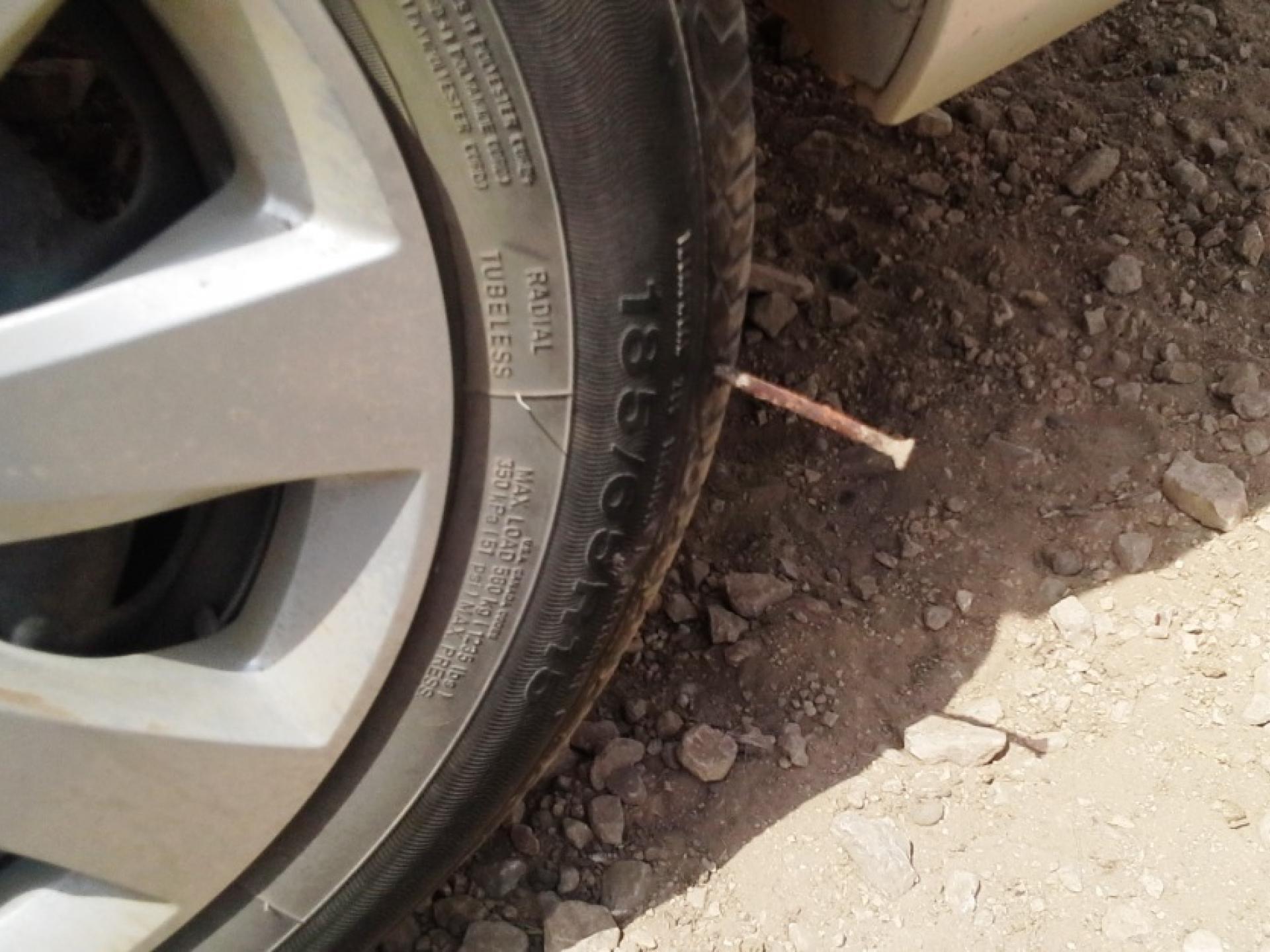 All because of one nail
Photo:
Analin K. 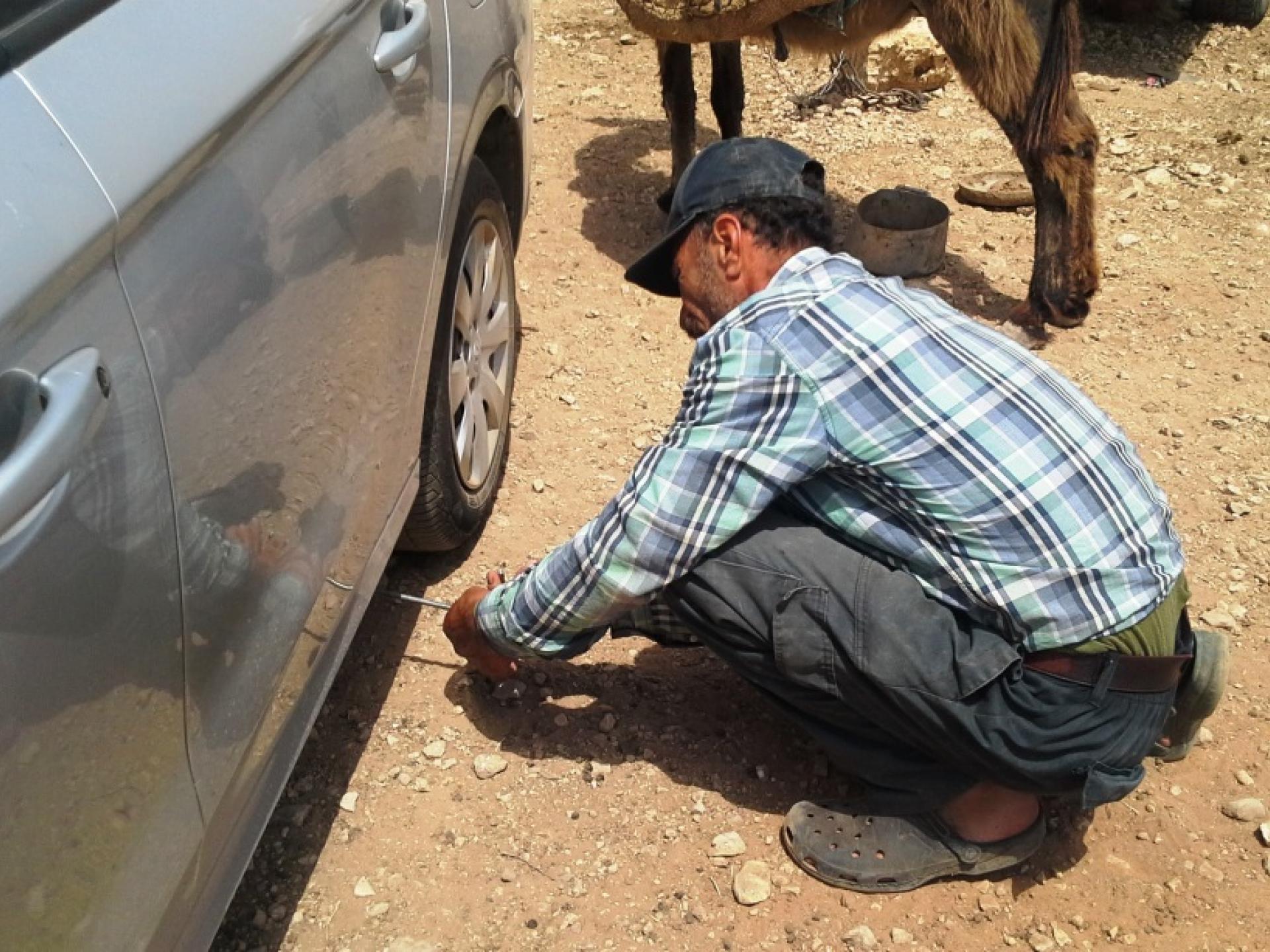 Gentleman B. changes a tire in our car
Photo:
Analin K.

Three cows blew up from exploding mines near En Sukut

On Tuesday (June 5), three cows belonging to a shepherd from En Al Beda stepped on landmines while he was grazing his flock near En Sukut spring, and were killed. Luckily these were ‘only’ cows. I read in Wikipedia that in 1968, the Israeli army planted 250,000 landmines along the Jordan river in a strip about 100-meters wide, as one of its measures taken in the struggle against infiltrators from Jordan. A security fence was also erected, closing off thousands of dunams along the border. Some of these areas were privately-owned by Palestinians, confiscated from them on Israeli security grounds and without any sort of compensation.

Following Israel’s peace treaty with Jordan (1994) the security grounds for laying landmines were no longer relevant and measures were taken to remove them. Since then, over 20 years, some of the mines have been removed and the lands given over to Jewish settler-colonists in the region, even if they were originally Palestinian-owned. Only about a year ago, as far as I remember, after a long-drawn-out legal proceeding, did the court rule that Palestinian owners of lands around En Sukut could cultivate their lands again. The first time they did, they needed military escort (or accompaniers not from the area) to protect them from Jewish settler-colonists who wished to forcibly prevent them from plowing their land.

Now it turns out that not all the land is clear of landmines and still contains such explosive ‘islands’. These are supposed to be fenced well, with clearly visible warning signs. The problem is that the fences are old and some no longer whole, and the army does not bother to renew them. It’s all a question  of money and the army’s priorities.  How much money are Palestinian lives worth? We know that presently the army is busy with the same problem at Qasr Al Yahud in the southern Palestinian Jordan Valley, an important Christian tourist site. There the Israeli military does remove mines and renew fences around still existing minefields. Apparently tourism is more important than the lives of  Palestinian farmers and shepherds.

After the cows were killed the army came and chased the shepherds away from  the entire area, and a regional commander’s order was issued closing the zone off from Palestinians. This is the easiest way to “solve’ problems, as it were, and another excuse to expropriate Palestinian land instead of promptly removing the mines.

In apartheid land a past checkpoint is never really dead. It might come to life again at any moment and delay only Palestinian, of course. We reached the checkpoint at 15:30. At the entrance to the checkpoint that had been open to traffic for a few years, a sign has been placed, only in Hebrew of course: “Slow down, checkpoint!” Since this was unexpected there were six armed soldiers standing there and stopping Palestinian vehicles. The rest of the traffic crossed freely, consisting of settler-colonists’ vehicles. Nearly all the settler-colonies in the Palestinian Jordan Valley are farming communities situated in enormous farming areas. Apparently some  of  the settler-colonists work away from the region and drive back home (moshav and kibbutz colonies) to their “dorm suburbs”. How many of them would prefer to live a bit nearer their place of employment if paid appropriate compensations? Worth checking. We waited to see what would happen to a Palestinian car reaching the checkpoint. It was delayed for inspection for about 3 minutes.

We visited B. at Khalat Makhoul. He recently fathered lovely baby

girl. The girls, at home, help take care of her. Before we took leave, luckily, B. found a 10-cm nail stuck in our car’s tire. Fortunately for us he changed the tire with our spare one, in the great heat of the day. Our  visits with families in Khalat Makhoul, Samara and En Al Hilwa were short since due to the Ramadan fast people usually sleep most of the hotter hours of the day.

Along Allon Road, the most well-maintained road between the Jordan River and the Mediterranean Sea we saw much heavy equipment, workers and police escort re-asphalting two spots. They progress slowly every day, until they complete the job. Someone has too much money…