We went to the Zeita and Deir al-Ghusun municipalities to learn about the olive harvest, and to the agricultural checkpoints at these locations.  We heard of problems: youths under 16 being denied entry, confiscation of permits from people who appeared to be too well-dressed, fewer permits granted than last year, and lands in the seam zone belonging to farmers from Zeita which were registered to them in the tabu but which Jat village took them over with the help of a contractor from Rahat, stole them and turned them into an active garbage dump.

B., the official in charge of coordinating applications for seam zone permits, reports that 370 olive harvest permits were received this year, from October 1 to December 30.

Not all family member who applied received permits – some were denied with the excuse there were enough workers for the size of the plot.

That’s a violation of the spirit of the 2017 regulations:

Olive harvest – recognizing the importance and special nature of the olive harvest season, applications are permitted for a number of agricultural permits for members of the farmer’s family in excess of the standard allocation...

Moreover, all applications for hired harvest workers after October 1 were denied, the excuse being there were sufficient numbers already available.

And:  While in previous years youths under 16 who don’t yet have an ID card - who would climb the trees to help their parents - could cross accompanying their parent who had their birth certificate, this year the soldiers refused, demanding they have a permit.  But when they applied for a permit they were refused, with the excuse that the youth was too young.  Thus, the farmers depend on the soldiers’ good will – sometimes they allow the youth to cross, sometimes they don’t.

During a few days about a month ago some 40 farmers had their permits confiscated because their clothes were too clean, or sometimes with cement stains, and more creative soldiers checked to see whether arms showed scratches from olive branches.  The permits were returned after 15-20 days following a vigorous complaint by the Moked for the Defense of the Individual.

A farmer whose permit was confiscated on 18 October because his clothes were too clean is still waiting – even though he has an Israeli work permit!  The saga isn’t over (see below).  The day before we came the soldiers didn’t allow 15 farmers to go through the checkpoints, again claiming their clothes were too clean.

Regarding permit renewals – in violation of the 2017 regulations – which require applying one month in advance – the Palestinian liaison office, following the instructions of the Israeli DCL, accepts renewal applications only one week prior to the current permit’s expiration date, and the flow of agricultural work is interrupted.

Does the right hand not know what the left is doing, or is this a policy intended to make the Palestinians despair of accessing their lands, and eventually annex them to Israel???

This year’s harvest was smaller than usual, so despite the difficulties they were able to harvest all the olives in the seam zone.  But the traditional family festivities which have for centuries accompanied the olive harvest are no longer possible.

The checkpoint opened at 11:35.  The coffee seller, who makes a living from selling coffee and sandwiches to the farmers who rise early and wait for the checkpoint to open, reports that yesterday a few people were again refused entry because their clothes were too clean.  We asked him to give those people the phone number of the Moked for the Defense of the Individual so it can file another complaint.

It was raining and we didn’t see farmers heading to the fields.  Three tractors returned, a donkey and about 25 people who waited in the shed for the tractors’ owners, and when they arrived jumped aboard in the driving rain to ride back to their homes in the village.

The last man to return managed to tell us that he had been detained by the soldiers, apparently because his permit was valid though he’d been blacklisted.  He’d been vetted for two months by the Shabak, but that must not have been enough for the soldiers.

12:00  We tried to locate Checkpoint 609 but our driver received contradictory directions from various people and we gave up this time.  We called our friend who owns greenhouses to hear what’s happening with him – he’s still waiting for permits for additional workers.

A white military automobile arrived and three MPs got out and opened the checkpoint at 12:50 exactly.  Three farmers – two women and a man – returned from the fields.

The women carried plastic sacks of cucumbers and tomatoes, the man a bag with olives.  He said that this morning about 30 farmers went through, who will work until evening.

They said there are olive trees and greenhouses irrigated with water from a well in the area of the seam zone near Athil village.

They complained the checkpoint is open only three days a week.  The greenhouse crops suffer, which is why they don’t expand them even though they could do so were the checkpoint open all week like at Deir el-Ghusun and Athil.

The man said the soldiers occasionally arrive an hour or an hour and a half late to open the checkpoint.

We met the head of the local council, the organizational secretary and a council member.

The council member told us he’d inherited one and one-half dunums in the seam zone and registered the land in his name, but complained that the trees had been cut down, as well as those belonging to other farmers because of a garbage dump that the town of Jat is establishing.  The story began about six months ago.  Jat hired contractors from Rahat to build a dump, and they expanded it onto the land of Palestinian farmers who don’t regularly come to their lands.  They’ve already taken over 15 dunums.  They complained to the Palestinian Authority which said it was unable to help.  The dump and the surrounding land is visible in the photo below (on the right, between Zeita and Jat).  The following day the head of the municipality was given Jat’s municipal phone number.  The reply – the Jat municipality obtained a legal government permit to establish the dump.

(We referred him to a farmer who’d met with a similar problem in Jayous, and we will try to find out which Israeli organizations could help.)

The Moked for the Defense of the Individual had asked us to obtain a list of farmers who had received permits in the past but were refused this August because their land was said not to be in the seam zone.  The Moked is handling the matter from a legal perspective, because also in the villages of Qafin and Zeita the army’s maps differ from those of the Palestinian Authority, and the army doesn’t provide information about where lands are located.

The village’s organizational secretary told us he had legally bought land from a Palestinian who works in one of the Emirates and signed the contract in the Jordanian embassy, but Israel refuses to recognize the contract even though, he says, it’s perfectly legal.  Until two years ago he’d received permits and built greenhouses there, but since his applications have been denied the greenhouses have dried up, nor has he planted new trees since they must be taken care of during the first years.  But despite this, he received a laborer’s permit for the seam zone for two months during the olive harvest.  He plowed, but didn’t plant trees which he wouldn’t be able to take care of. 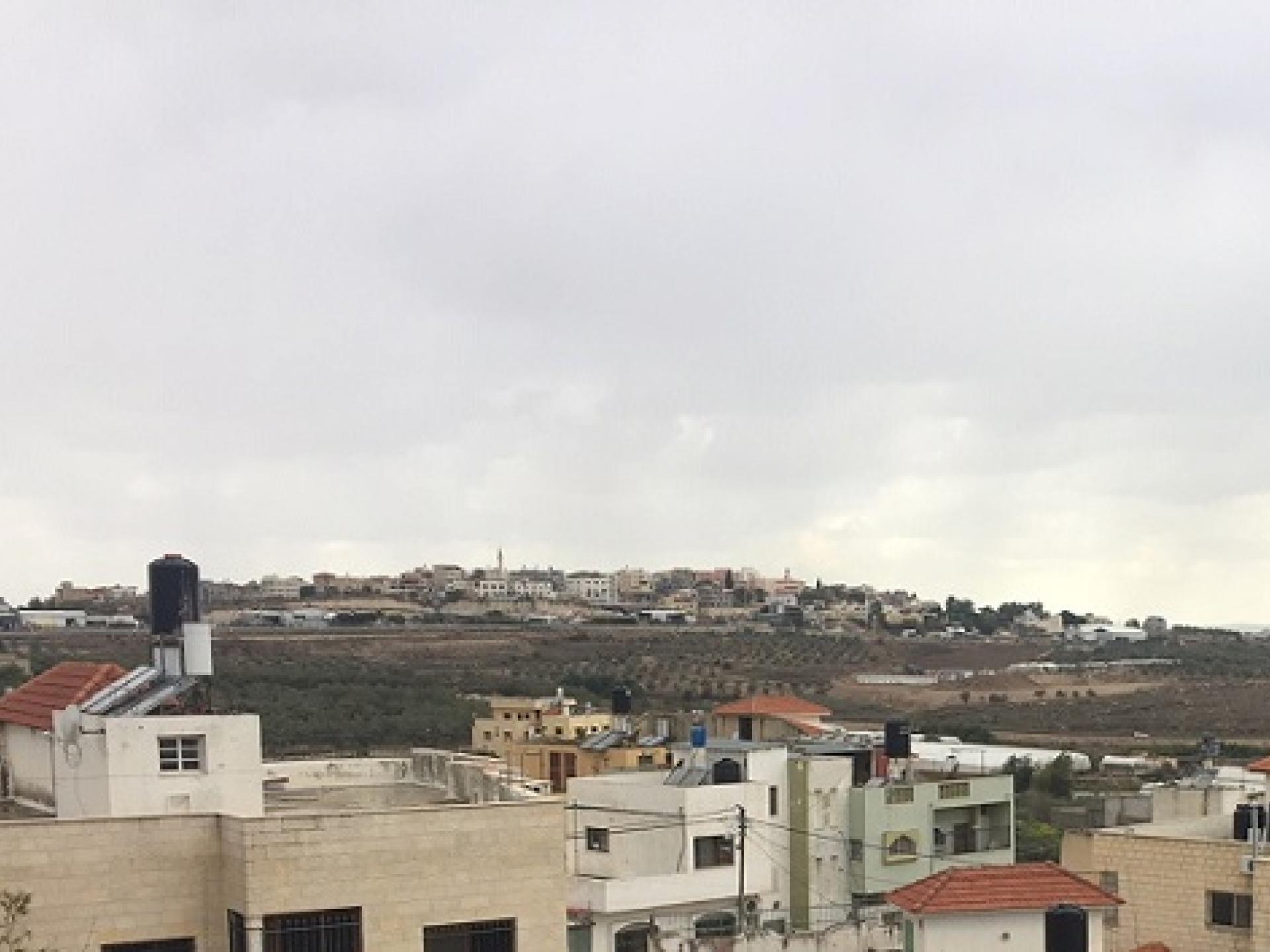 You can see the garbage dump of Jat on the right between Zeita and Jat
Photo:
Miki Fisher