We went to visit the inhabitants of Ras Al Ahmar who were ordered to vacate their homes from today on for three days, and to add trouble to misery, another two tractors were confiscated from them after eight tractors had been confiscated last month. We brought with us warm meals and sweets for the children (Yaacov saw to that), perhaps this would make them feel a bit better. In the past two months they have suffered harsh blows by the army: home demolitions, tractor confiscation, and being evicted twice because the army needed to maneuver in their location.

Our problem was how to get to Ras Al Ahmar. Around 10:30 we passed by the Gokhia Gate and saw Ras Al Ahmar about 100 meters from the gate. Atuf, where these inhabitants have found shelter, was also visible not far away (we photographed it as well). However, the Gokhia Gate that arbitrarily separates those living on either of it is always locked and preventing vehicle passage.

Observing from a distance, we saw no military action in Ras Al Ahmar. The Gate was closed meaning no military forces had recently passed through as had happened in the past when the inhabitants had to evacuate their homes (this happened twice last year).

We had to make a detour for over an hour via potholed tracks in a 4-wheel drive vehicle in order to bypass those 100 meters. This is the terrain they have to cross in order to get water, go shopping, obtain medical care, etc. Now, without tractors, how will they do it? How will they bring water for themselves and for their flocks?

We reached Atuf, the village neighboring Ras Al Ahmar, to which they fled. We reached the village elder, Bashar Bani Odeh, in order to inquire where they were staying. Apparently some of the women remained in the tents. One man told us that in his family was an ill person who remained in the tent, for without a tractor he cannot be transferred. The rest of the women found shelter in Atuf. The children study there anyway and will remain in the schoolhouse until evening, when they will be allowed to return home. We drove out to the fields, where we found the men with their flocks. We met several. They were depressed.

On our way we also saw –

Hamra Checkpoint – 15:25 – 36 cars waiting in line to proceed from the Jordan Valley to Area A. This checkpoint has not been operated in the past few months, and today of all times it was manned during rush hour as people return from work. It let them through only in one direction, alternately, and that was the reason for the waiting line. We did not stay to time them.

We saw a water pipe line on the way, laid between the villages of Yarza and Toubas, European-financed, from a village that has water to one that does not. The army has cut and destroyed it 3 times, devastating the possibility to supply water to Palestinian and not from the Israeli water company “Mekorot” that pumps most of the local water and allocates it only to the settlements.

The entrance to Aqraba village was open (after being closed nearly a whole year).

The entrance to Jawarish village is still blocked, over a year.

I also photographed Q.’s skinny cow that resembles the Biblical 7 lean cows, for rain has been long in coming, there is no grass, hay costs a fortune, so the cows starve. 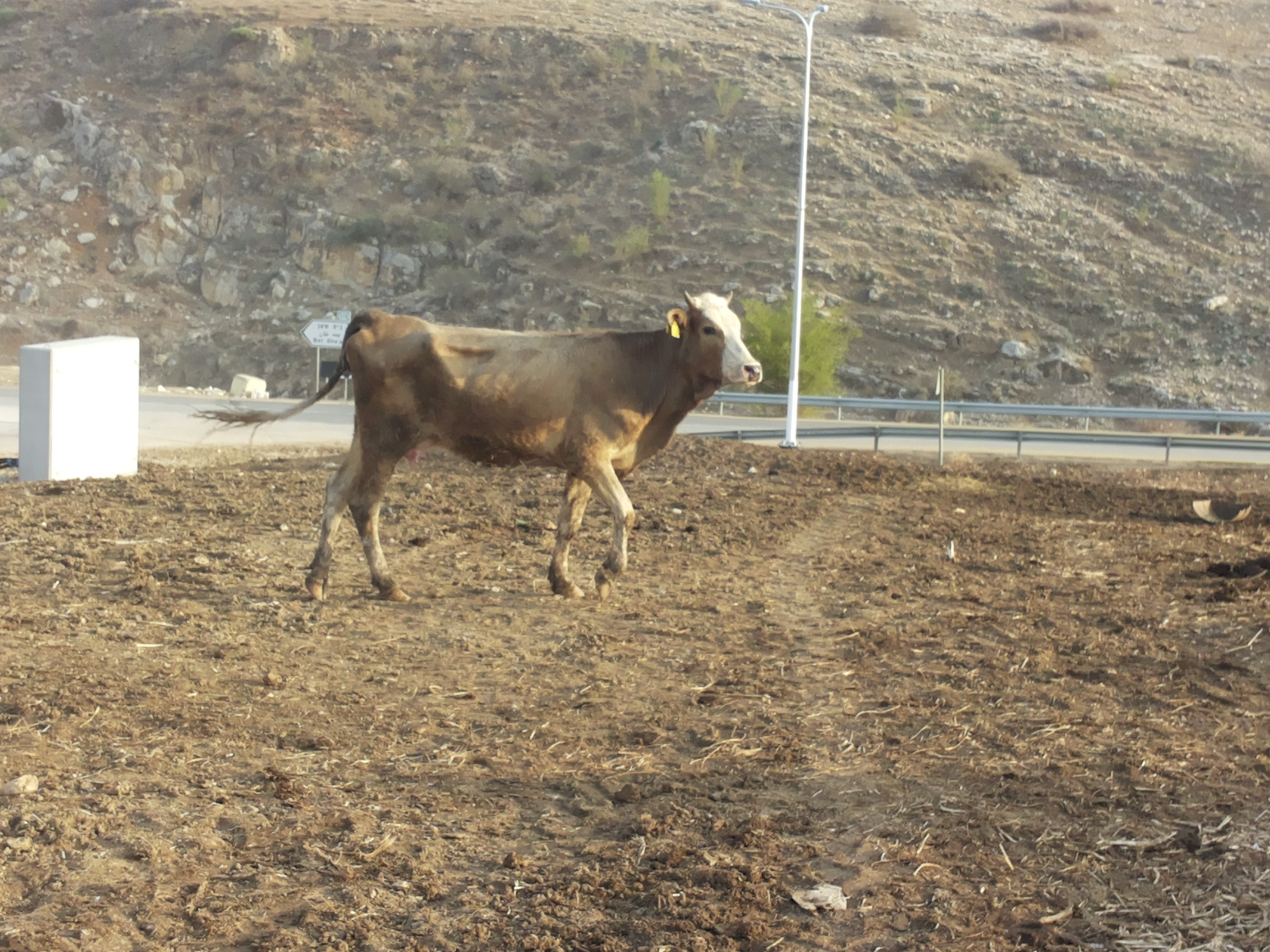