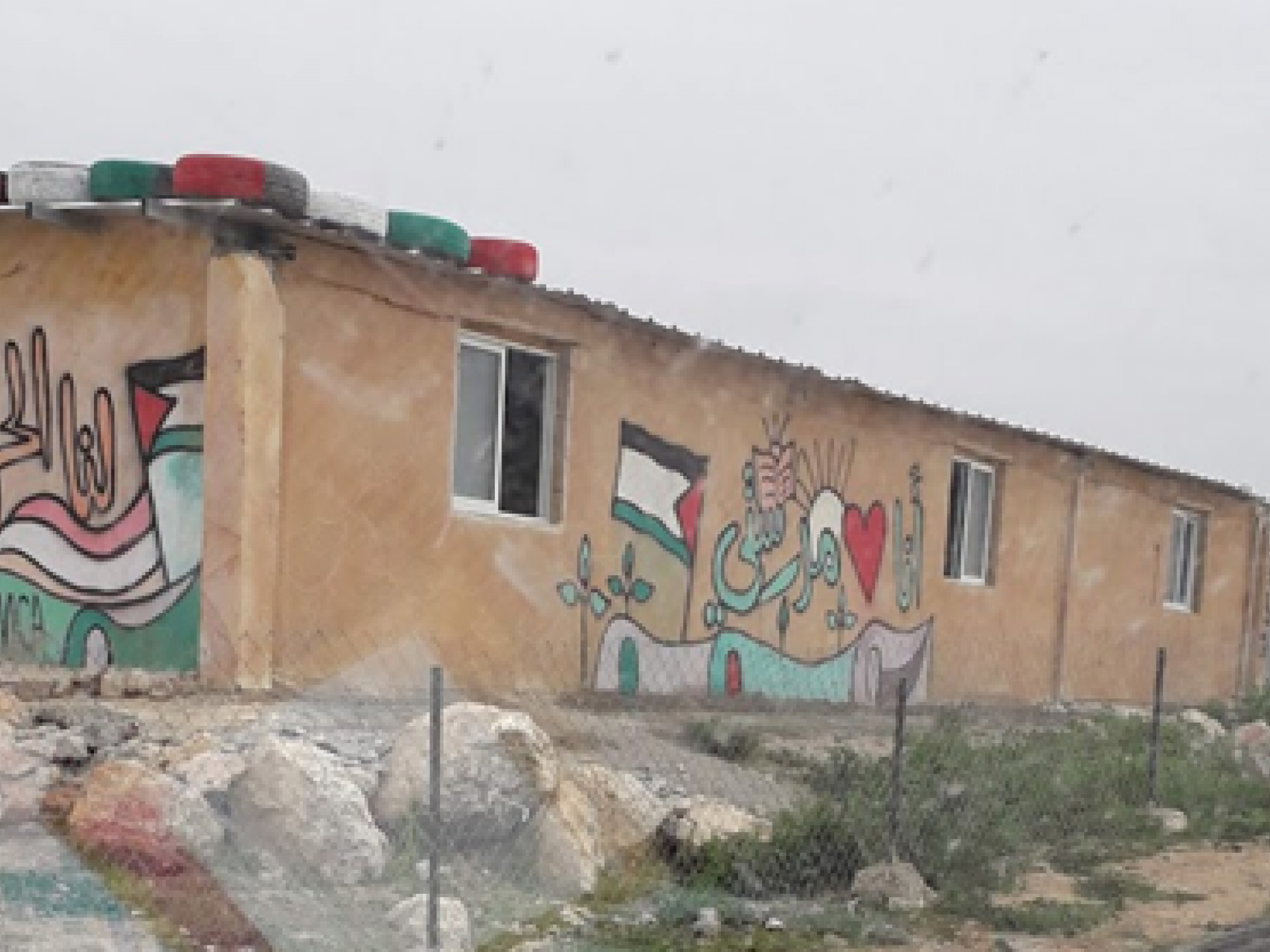 School in Zeituna: The school has already been described here this week. One of several schools called Etgar (Challenge), which is not approved by the Israeli government, and is being destroyed over and over again. Built during one night (reminiscent of something?), after repeated army demolitions and in the last demolition, the equipment was also taken away. The walls are hard, but the roof of the  sheds is made of corrugated iron with car tires on it.

The purpose of our visit is to talk to the principal, Fatma, about the kindergarten, and also to recruit local advice for kindergarten teachers at the Huda kindergarten in Hashem-el-Daraj.

Fatma is an educated woman who comes to school from the village of Idna - an hour's drive away. Fatma explains the ideological element behind her decision to work in a school like this. She has many visitors, from the Hebron area. We had an opportunity to explain our activities, and the feeling was that the initial suspicion had been replaced by appreciation.

Fatma showed us the planned kindergarten class. An empty room - all the equipment was taken. She hopes to bring a kindergarten teacher this week.

We exchanged phone calls, and agreed that we would try to help get equipment, and maybe even activities.

Tuwani: We drove to Tuwani following information about the uprooting of olive trees by the residents of Havat Ma'on, the illegal outpost located in the grove above Tuwani, who harass the residents of Tuwani on a regular basis. We did not find Juma'a where the uprooting took place but he sent pictures. I tried to get to the plot on my own, but I could not find the place, and at some point I began to be afraid of the residents of Havat Ma'on. Later we met Juma'a with his walking stick, a result of a beating from settlers, at the cave settlement and this is the explanation concerning the olive trees.  Two weeks ago, they planted a new plot with about 50 olive trees in the valley that runs along the grove of Havat Ma'on. Yesterday morning they discovered that 25 seedlings had been uprooted. The trail led to Maon Farm. They called the police, which was indeed coming. They are preparing to file a complaint with the police with the help of a lawyer. I know it's a waste of time, and yet. A few months ago large olive trees, 30 years old, were uprooted.

While we were in Tuwani, we saw cars on the hills between Tuwani and the unauthorized outpost of Abigail. We drove, and there we met Juma'a Tuwani, Nasser from Susiya, and other friends. Juma'a explained: There was a cave village here, but the residents of Abigail and the administration forced them to leave. That was in 2002. Now they have decided to return. Several families returned, resettling themselves in caves. Juma'a's explanation: "You (Israel) do not allow us to return to our villages from above the earth, so we will come back and live under it." How touching.

So they are having  a festival in honor of the return to their the ground. There is a tent for the celebration, Palestinian flags, and a convoy of dignitaries, including the PA's "minister of settlements." There is music. Translation of the song which is played over and over: (The translation is done by  Muhammad):

I stay on my religion,

My blood is Palestinian"