A visit to the organizers of the Beach Days in Burin.

When we sat with women from Burin during their trip to the seashore, we were heartbroken to hear their accounts of the daily harassment the residents of Burin suffer from the settlers.  The women kept telling us what they have to go through every day under occupation:  stones thrown at their homes, at the school, at children playing outside.  Most of the women are farmers, and tending their vegetable gardens requires an escort by male family members.  And, of course, they tell us what happens during the olive harvest, and other things.

We decided to visit them again to show our support.

D. met us today.  She organized the group of Burin women for the beach day and has been in touch with us for a few years.

We drove up to Burin.  From her terrace we could see Yitzhar across the way and the nearby Givat Ronen outpost, which borders her olive grove. 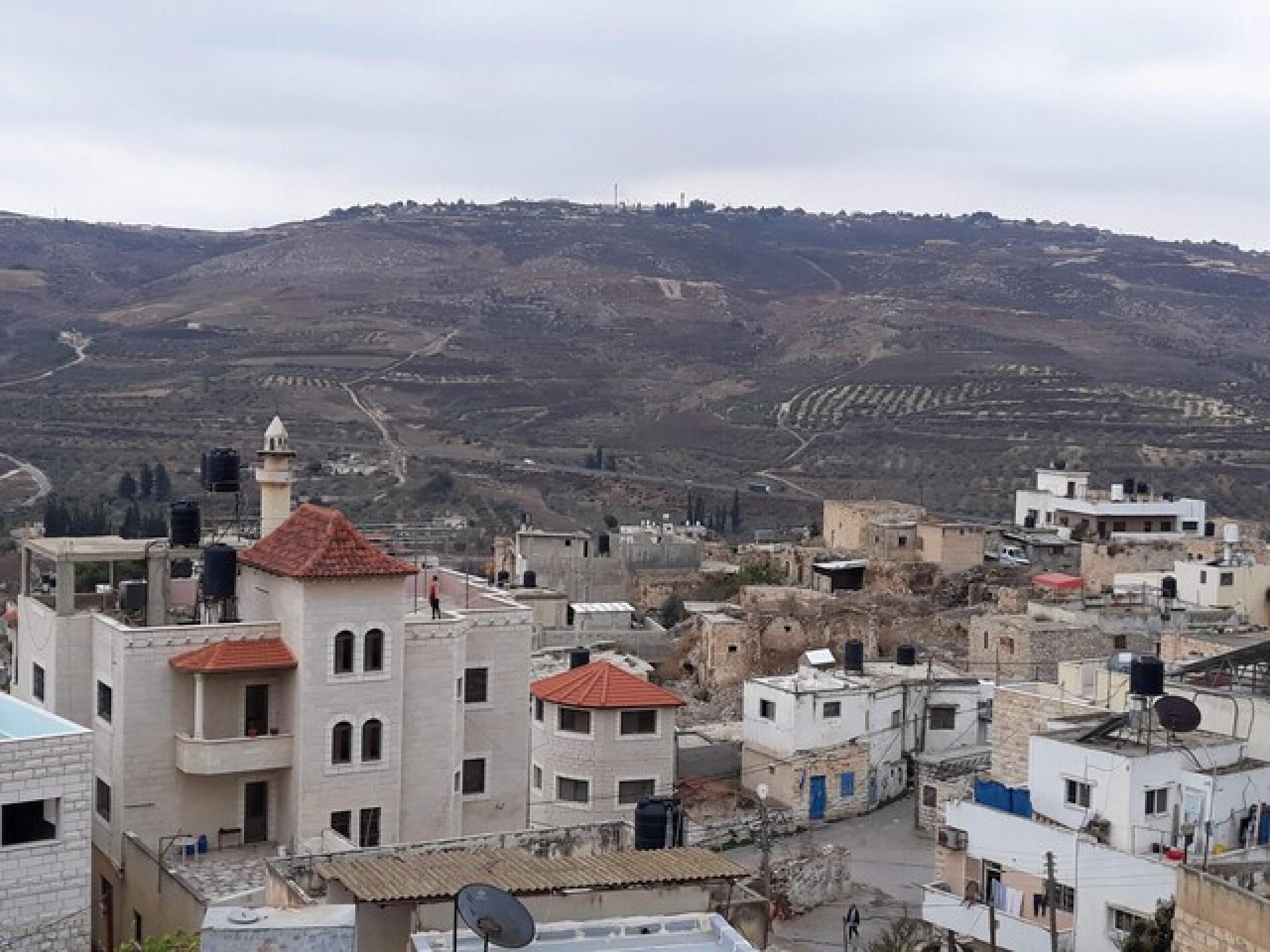 From the village of Burin, a view of Yitzhar and the nearby Ronen Hill outpost 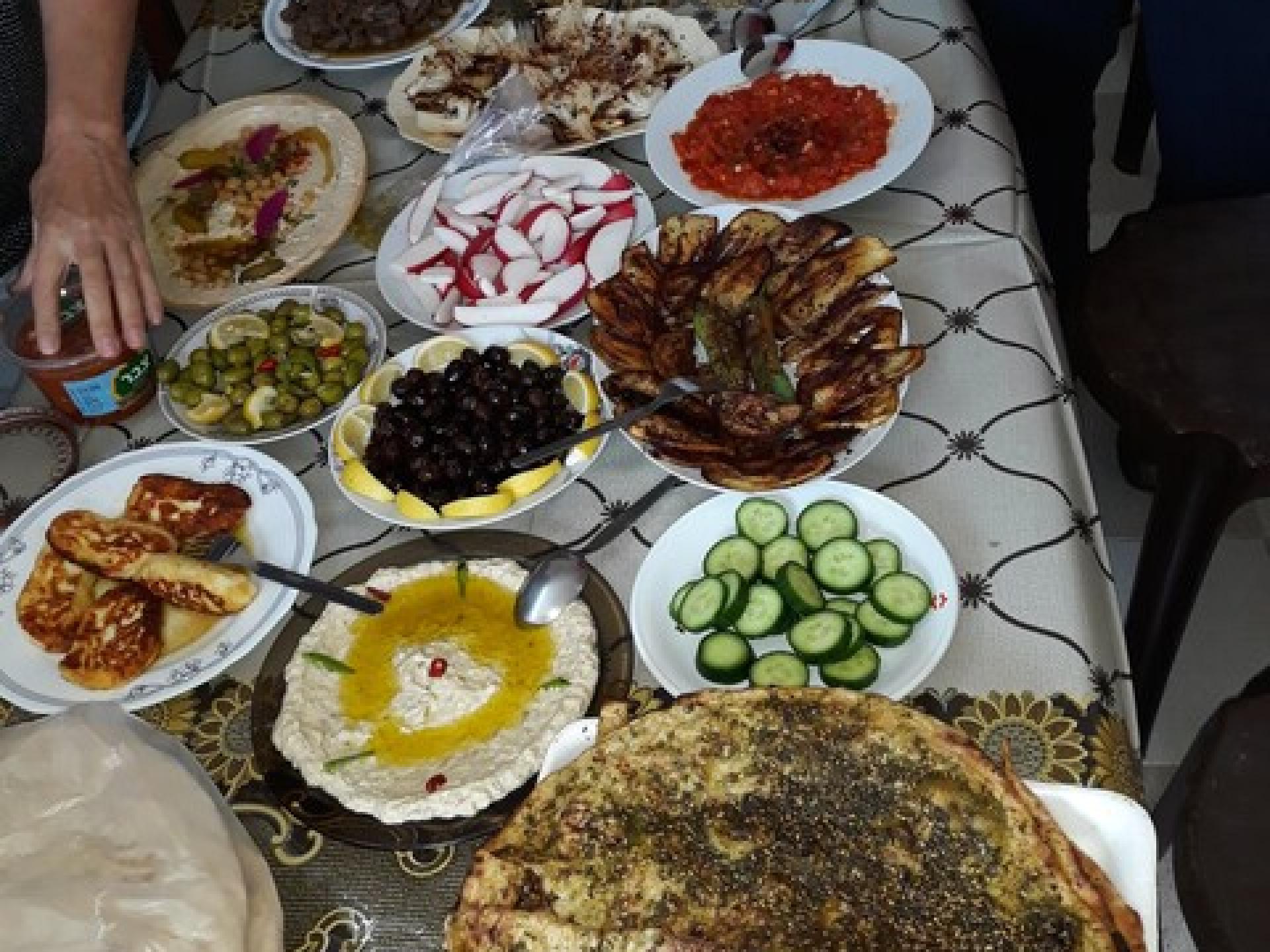 D. prepared a fantastic Palestinian meal, and while we were sitting our friend M. also arrived.  Both of them described the problems with this year’s olive harvest.  M. said that this year the Israeli DCL and the army were full participants in the interference and incitement by the settlers.  2000 trees were cut down or burned between July and October 2019!!!

Unlike previous years, no permits were granted for October, and only in November were a few received.  Meanwhile the settlers ran riot in their groves:  cut down trees, set them afire, caused other damage.  When Rabbis for Human Rights arrived to help, the settlers became particularly violent.  It was enough for the settlers to approach the harvesters who were assisted by Israelis for the army to arrive quickly and create a “closed military area.”  (I myself participated in the harvest on such a day and saw it happen with my own eyes).  Since the permits were issued only for November, the settlers had already picked the olives adjacent to Givat Ronen by beating the branches and damaging the trees.  When Doha and others from Burin came to harvest those trees, they found no olives, as well as broken and severed branches.

The struggle with the settlers is connected to the boundary between them and Burin.  The settlers want to expand their area and are pressing against Burin’s groves adjacent to the settlements.  Every year the settlers take over more land.  They burn and cut down the nearby trees and expand their territory each year.  They don’t allow Burin residents to work their land during the year either, thereby taking advantage of the old Ottoman law allowing expropriation of farmland that hasn’t been cultivated for a number of years.

M. showed us a video of damage to D.’s trees, and theft of her olives, which unfortunately border the Givat Ronen outpost.

She was four years old when the Six Day War broke out.  Her father was a police officer in Ramallah, and was killed during the war.  Her mother was left with four children who grew up in the home of their grandparents, which we visited (their house is 200 years old, with stone arches).

Despite the father’s death, D. was taught to love humanity, and her curiosity was encouraged.  She has three children; her husband teaches Arabic in high school.  They live in the family compound with her grandparents and her sister.

Some of the neighboring houses are damaged and abandoned.  She says their inhabitants fled in 1967.

She’s well-known for her cooking, and an Italian volunteer who’d been in Burin had twice invited her to a Slow Food conference in Turin.  She anticipates going again next year.  She speaks English which she learned with the help of her daughter who’s a student.

Like many Palestinians, she distinguishes between evil Jewish settlers and the good Israelis she meets.  She repeatedly emphasizes the distinction.

We want to make monthly visits to Burin and meet with the group of women she leads.  They’re shut up at home and making great effort to survive.  It will be good for them to meet us, Machsom Watch women, and get to know Israeli women who identify with their struggle and their difficulties.