Burin, trapped between Yizhar and Har Beracha, is pummeled incessantly | Machsomwatch
Skip to main content
Back to reports search page

Burin, trapped between Yizhar and Har Beracha, is pummeled incessantly 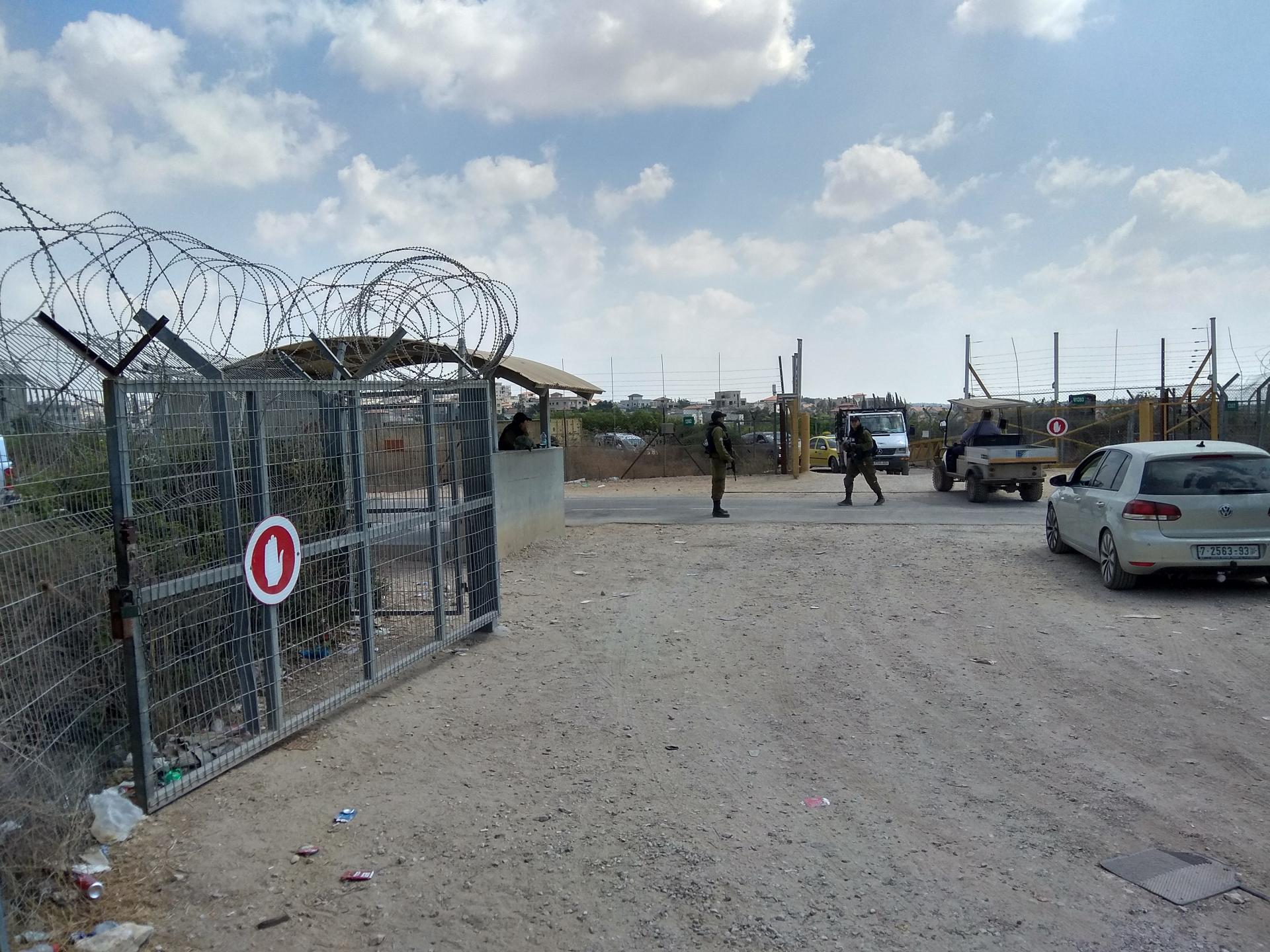 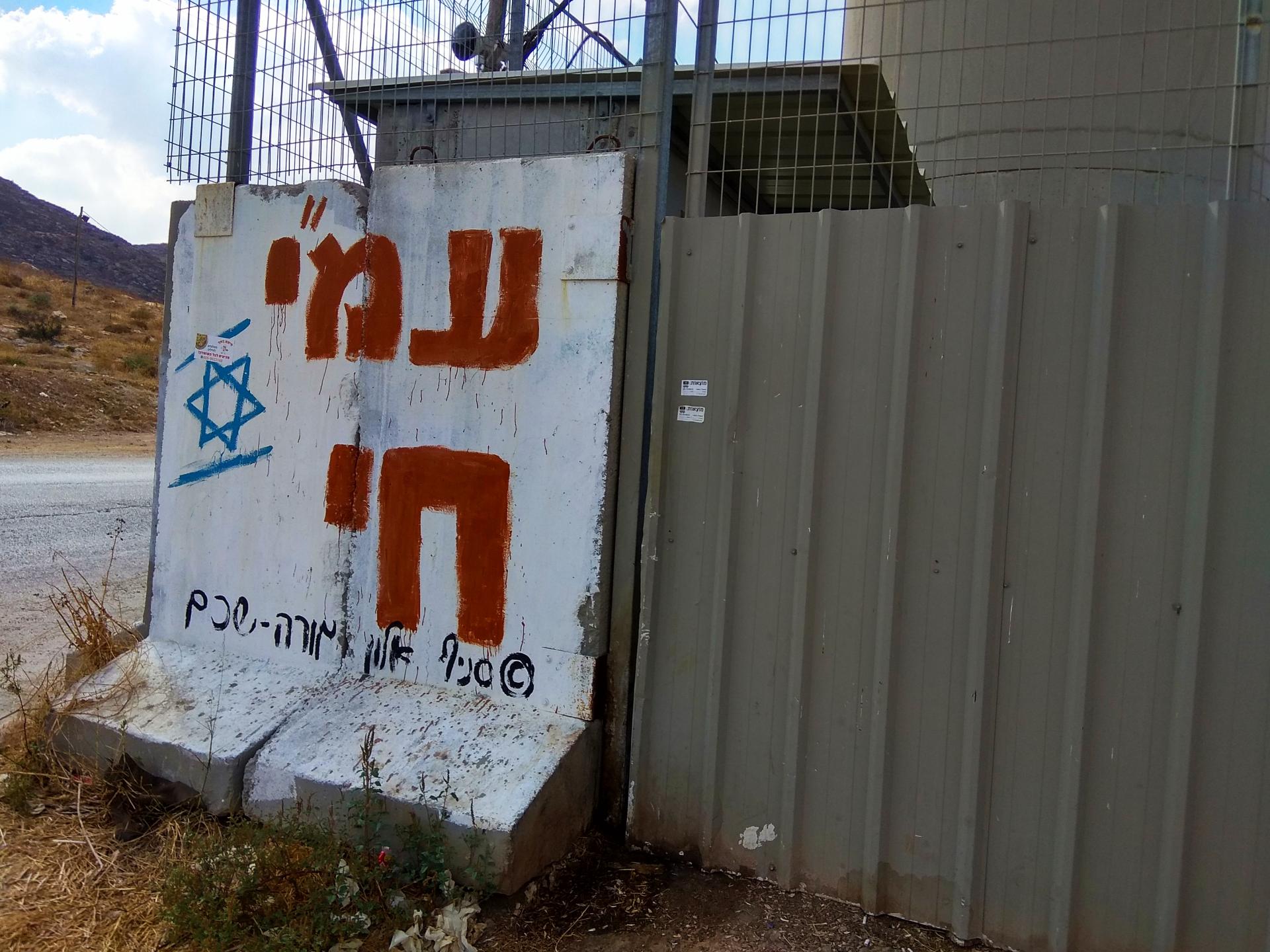 A large sign decorates the tower at Beit Furik checkpoint 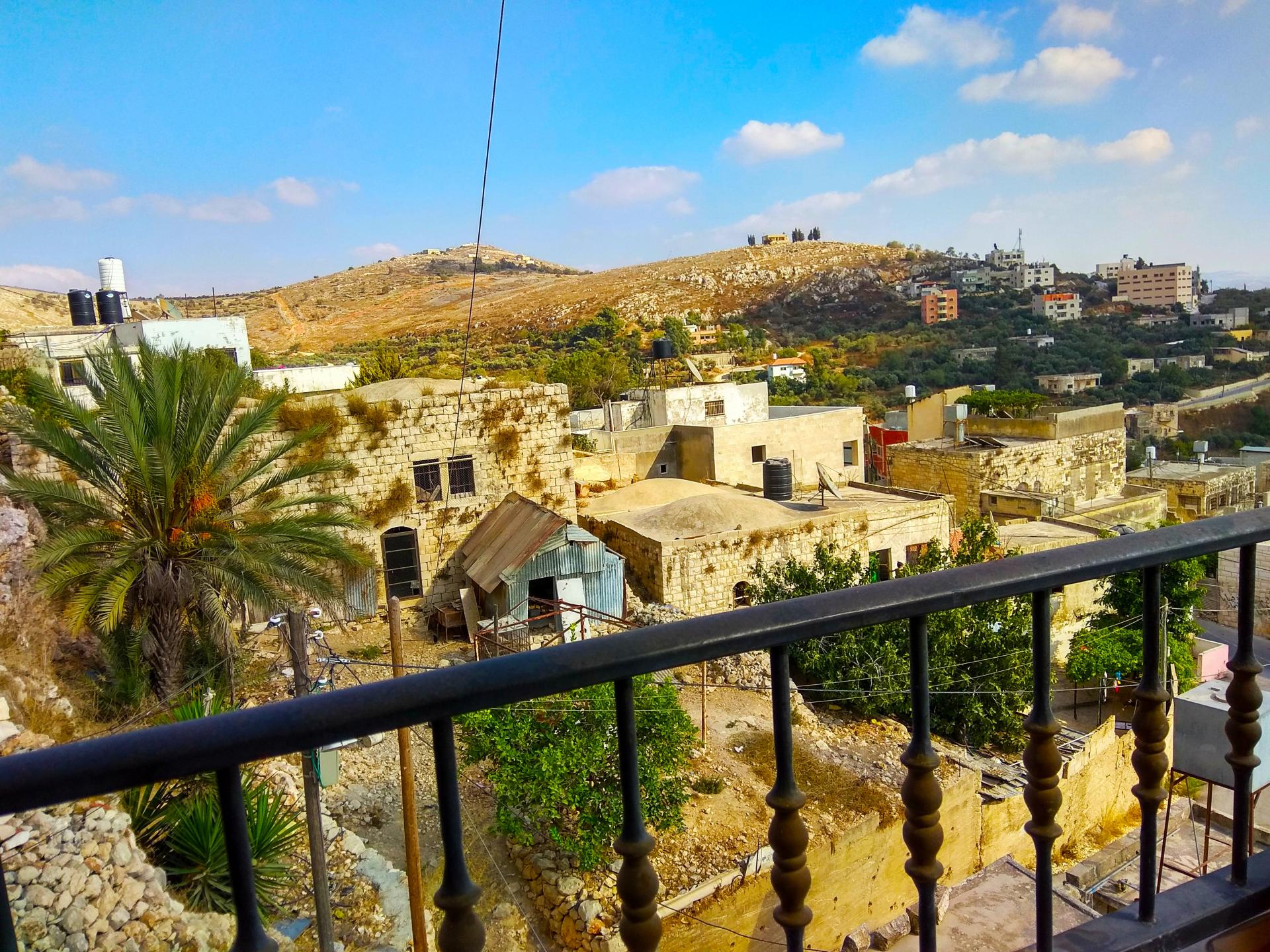 Burin from the balcony of Doha's house. On the horizon, Har Bracha, from which the curse of the fires glides 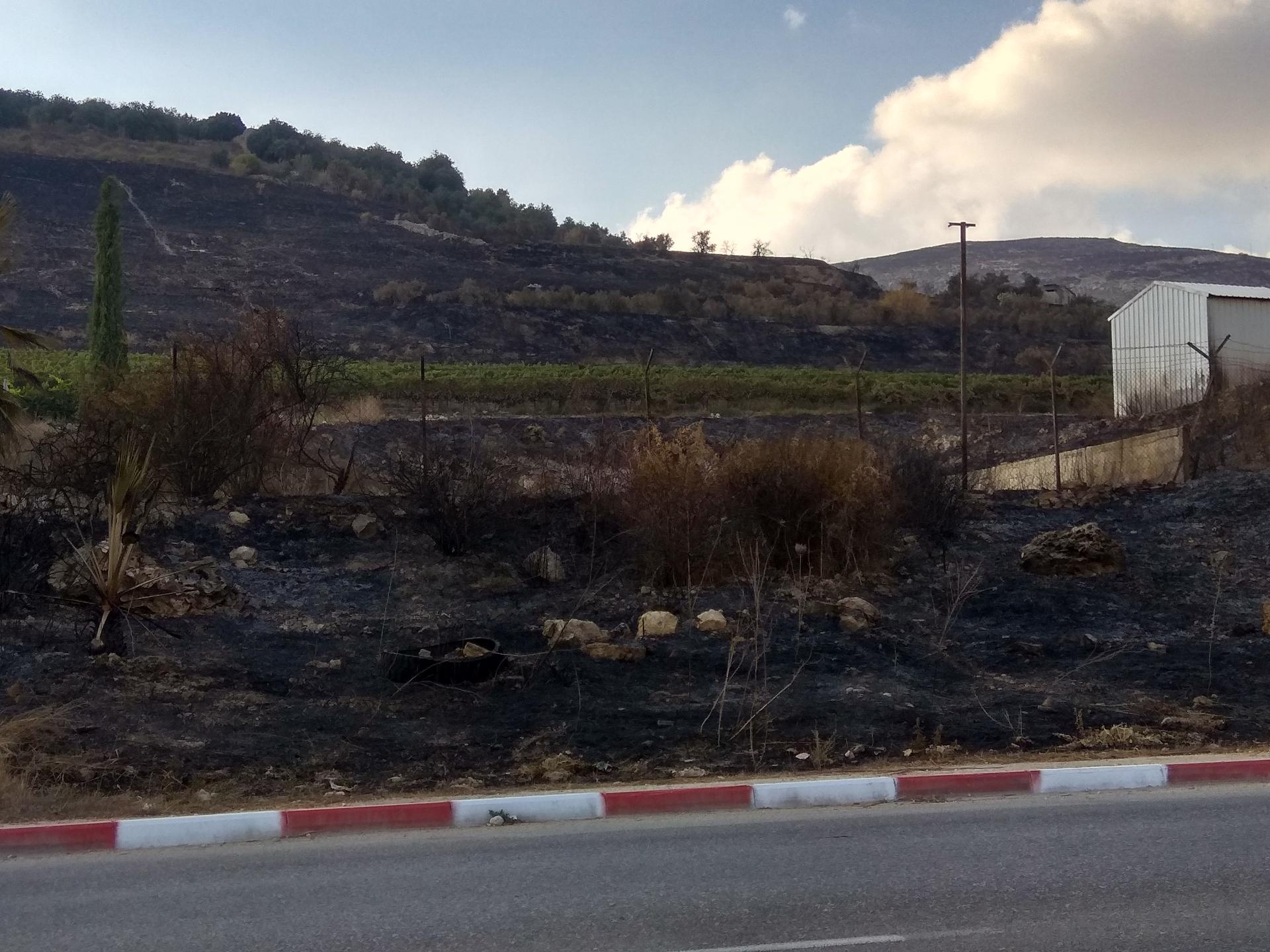 The black uphill was until 4.9.2019 an ancient green olive grove

Burin’s olive trees are burning as the olive picking season nears.  In the course of three weeks large groves were twice set on fire.  For some reason they are always on the slope of Har Beracha and the Giv’at Ronen outpost.  There’s no search for the arsonists, and the local firefighters are prevented from going up the hill.  The result:  many dunums of charred ground.  Details below.

13:45  A relatively large number of vehicles entering and exiting, given the afternoon hour.  Inspection goes quickly, the soldiers treat those crossing politely.  But the question still remains, why must people go through a checkpoint to reach their lands?

The emplacement above the road is manned..

The emplacement in front of the gate is maned, as is the tower.  Cars go through without delays.  A new orange barricade glistens at the entrance.  Some DCL soldiers standing near the gate approach us to ask who we are.  We explain.  They even said we’re doing an important job, but politely asked us not to photograph soldiers because it endangers them.  We explained that we don’t.  Nevertheless, they asked to inspect our cellphones.

The checkpoint is open; there are no vehicles.  A large sign decorates the tower.

Burin – Flames in the olive groves

Burin, trapped between Yizhar and Har Beracha, is pummeled incessantly.  We came to Duha’s home.  A huge mound of fresh dates was immediately placed on the table, along with cool water and steaming coffee.  Doha heaps dates of a plate for each of us.  And pours water.  Doha is a small, energetic woman.  She speaks with pain of the harassment by the settlers and the residents’ suffering because of the occupation, but there’s no hatred in her eyes or in her words.  Here’s what she tells us:

It happened yesterday (Wednesday, 4.9.19).  At approximately 11:00 AM a fire began in her brother’s olive grove.  The flames came down the hill from Har Beracha and the Giv’at Ronen outpost.  Her brother, helpless, called the local fire department, but by the time they arrived a large part of the grove had already burned.  The firefighters managed to extinguish the flames near the road, but they weren’t allowed to go up the hill.  So the entire grove, except for the trees near the road, was burned completely.  The olive trees were hundreds of years old.  Doha’s brother just lost his grove, his main source of income, that he’s been cultivating his entire life…

This isn’t the first time flames have come from the settlements.  Three weeks ago a different olive grove was burned, on the slope of the hill.

Doha tells us about the settler’s newest trick.  They send children to the intersections to provoke Palestinians, in order to create reasons to build bypass roads (on expropriated Palestinian land, of course). 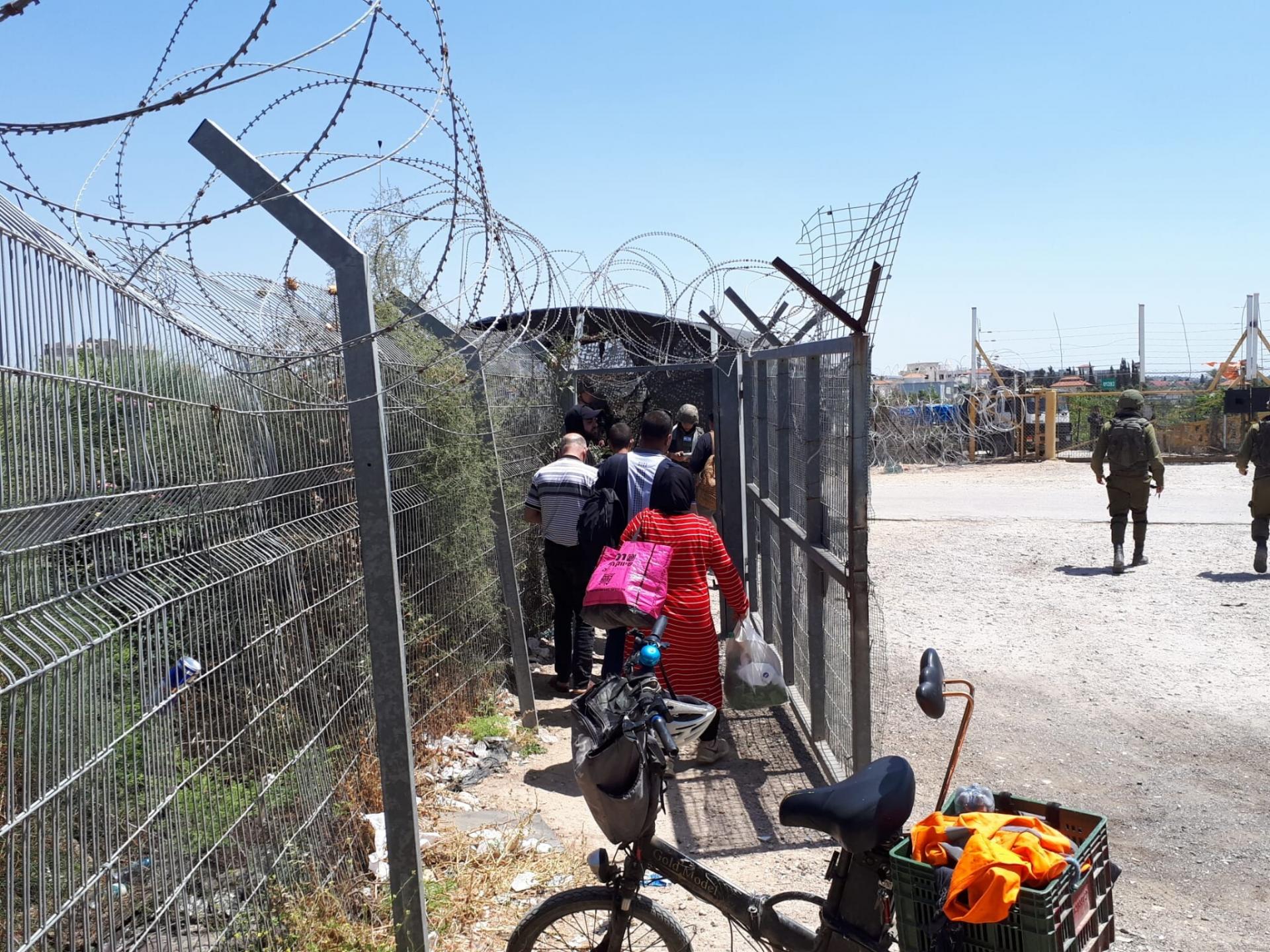