Etzion DCL: In August the occupation is not only cruel; it sweaty and smelly too. | Machsomwatch
Skip to main content
Back to reports search page

Etzion DCL: In August the occupation is not only cruel; it sweaty and smelly too. 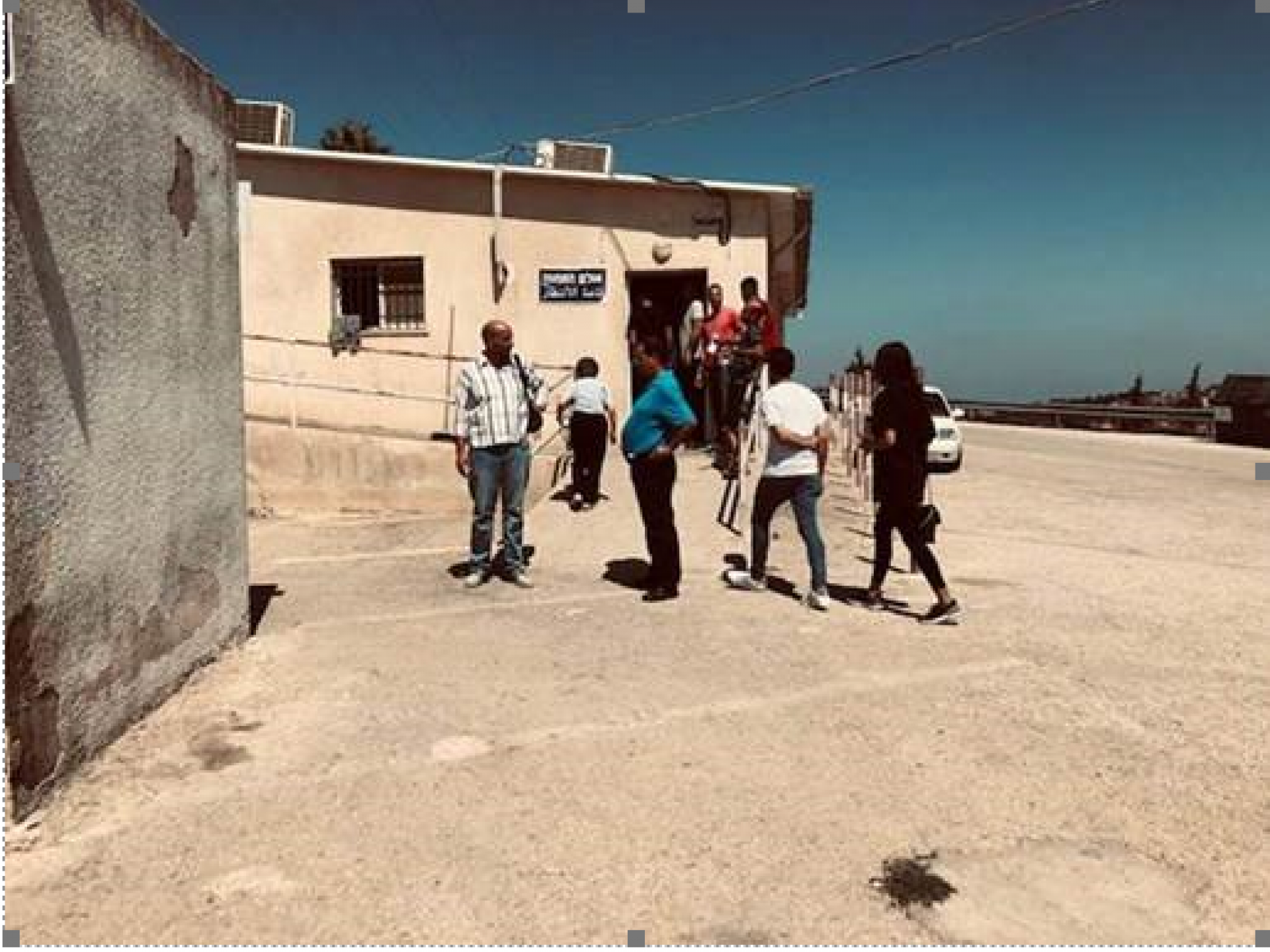 Photographer:
Natanya Ginsburg
Etzion DCO: We arrived at 10.40. Already from the outside we could see that the congestion in the hall was so great that many people were waiting outside 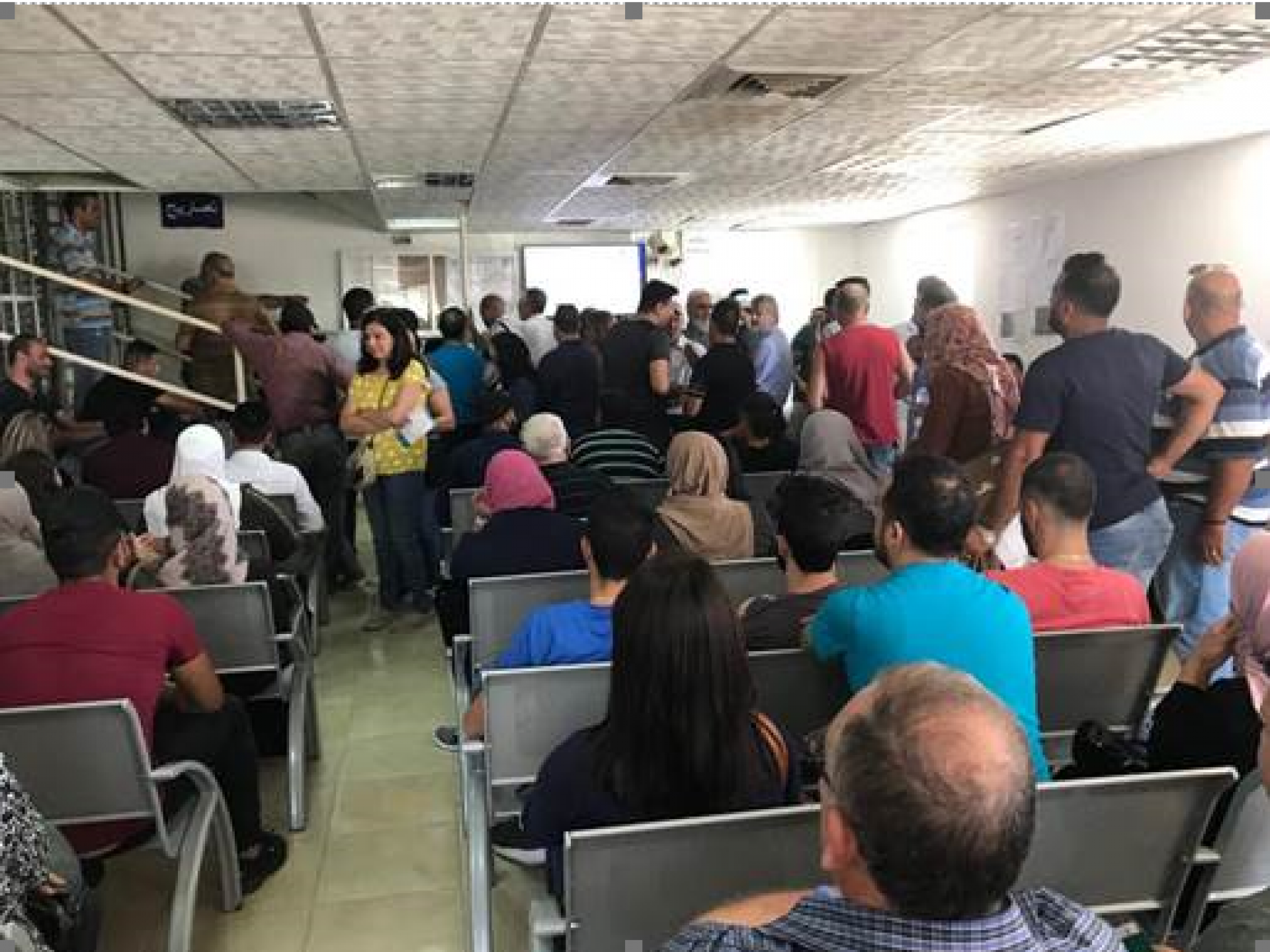 Pictures of "happy Palestinians" - not in reality

Photographer:
Shlomit Steinitz
The hall is terribly hot. Even sitting there, only speaking to people the sweat pours down 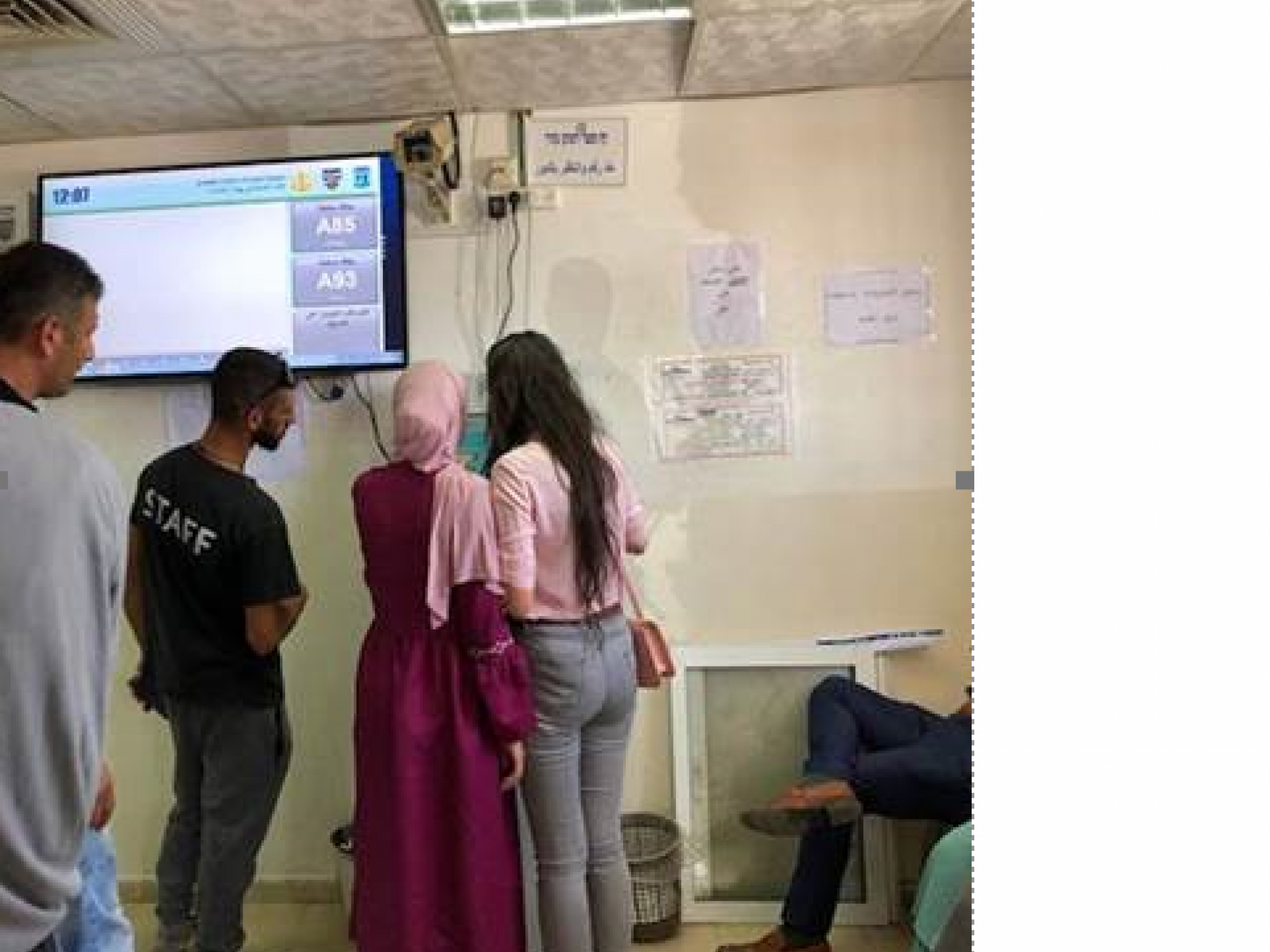 Photographer:
Natanya Ginsburg
The board showed 59 when we arrived. Only 26 people were dealt with in that time.it is the day of the turtle

We arrived at 10.40. Already from the outside we could see that the congestion in the hall was so great that many people were waiting outside.

The hall is terribly hot. Even sitting there, only speaking to people the sweat pours down. The air-conditioning, like the screen with the pretty pictures of how well the Palestinians are treated under the occupation, is also there for camouflage. We have never seen it working. At times tempers flared. But, unlike Israel, where even a parking lot ends in murder( there was no violence. The water machine was working.

The toilets are filthy and there is no running water in them. They cannot be used. The sign showing where the toilets are, seems to droop with despair. The stench is terrible even though the sewage is no longer running. Probably because there is no running water.  People crowd the steps and according to the board the numbers of how many people have been dealt with creeps forward at the speed of an exhausted tortoise. The soldier tells the people to go and sit down as the offices are too crowded to allow more people in.

People told us that they had been there since 8.30 or 9.00. There were at least two people who told us that they had been there the previous day and an announcement had been made that anyone whose number exceeded 400 should leave and come back the next day.  Needless to say, they were not given the option of using the same numbers first thing in the morning but had to start again and now at 11.00 they were still waiting and not sure if this time they would get in. We keep hearing the word “Fauda”….confusion.

Ora was told but we did not see this ourselves,  that a group of older people had been allowed in earlier.

We were told that the situation at Bethlehem checkpoint is as bad as ever.

Every now and again the soldier would call out that anyone who need a permit or to speak to the police…who for once were present….should come to the turnstile and would be let in. There were few. Most people were there for the magnetics.

One man told Shlomit that he had been “prevented” for 11 years but each time when he came to the Secret Service he was told……you help us and we will help you. A well known tactic.

One man  came to make a magnetic card and was told that he was not allowed entrance to Israel and had to go to the Secret Service. We gave the usual information...request for work from an Israeli, papers, etc. Not to go to private lawyers but first to contact Sylvie. While speaking to him, a man came up to us and said , “Sylvie. Only Sylvie will help you.” And another standing there nodded his agreement.

Another asked for advice for his nephew who had come from Jordan a few years ago but as soon as he came he was told that he could not enter Israel.

A man, spoke excellent English, said that they had been told in the church that they had to come and renew their magnetic cards if they wished to continue entering Israel and there did seem to be many Christian Arabs there, amongst them many women. He said that about thirty people from the church were there.

A young  man studying in Italy needed to get to the Italian consul in Jerusalem to renew his papers. He had been there at 9.00. Now the hour was 11.16.

A man who works privately for a woman in one of the settlements said that he had suddenly found that he was a security risk. The lady wants him back. Shlomit advised him to tell her to speak to the security officer of the settlement.

The board showed 59 when we arrived. This is what is showed when we left just after 12.00. That is to say 26 people were dealt with in that time. As I said, It is the day of the turtle

When we left after 12 very few of the people who had been sitting and waiting when we arrived were still there. They said that between 12.00 and 13.00 the soldiers took a lunch break. Any reason why they cannot do it in shifts?