We visited two residents of Susiya today. Both were expelled from their original village.

An elderly man, sleeping at night in Yatta, arrives at his land every day after morning prayers, and stays there until evening prayers. On the land he has olives and almonds. He planted some new olives and almonds, which had to be watered. He has a water tank in the plot. The tank itself costs about NIS 600 and is filled  from a truck. The water is used to irrigate the new plants, and for himself for drinking and preparing tea during the day. Last week, after filling the tank, there were two days of rain in which he did not reach the plot. When he returned to the plot, he discovered a waterless tank, punctured with many round holes that seemed to have been made  by a drill. He knows that the settlers from Susya tend to go through his plot on their walks between the settlement and the archeological site. He assumes that they did it while on a trip ... now at a loss not knowing how to water his plants. 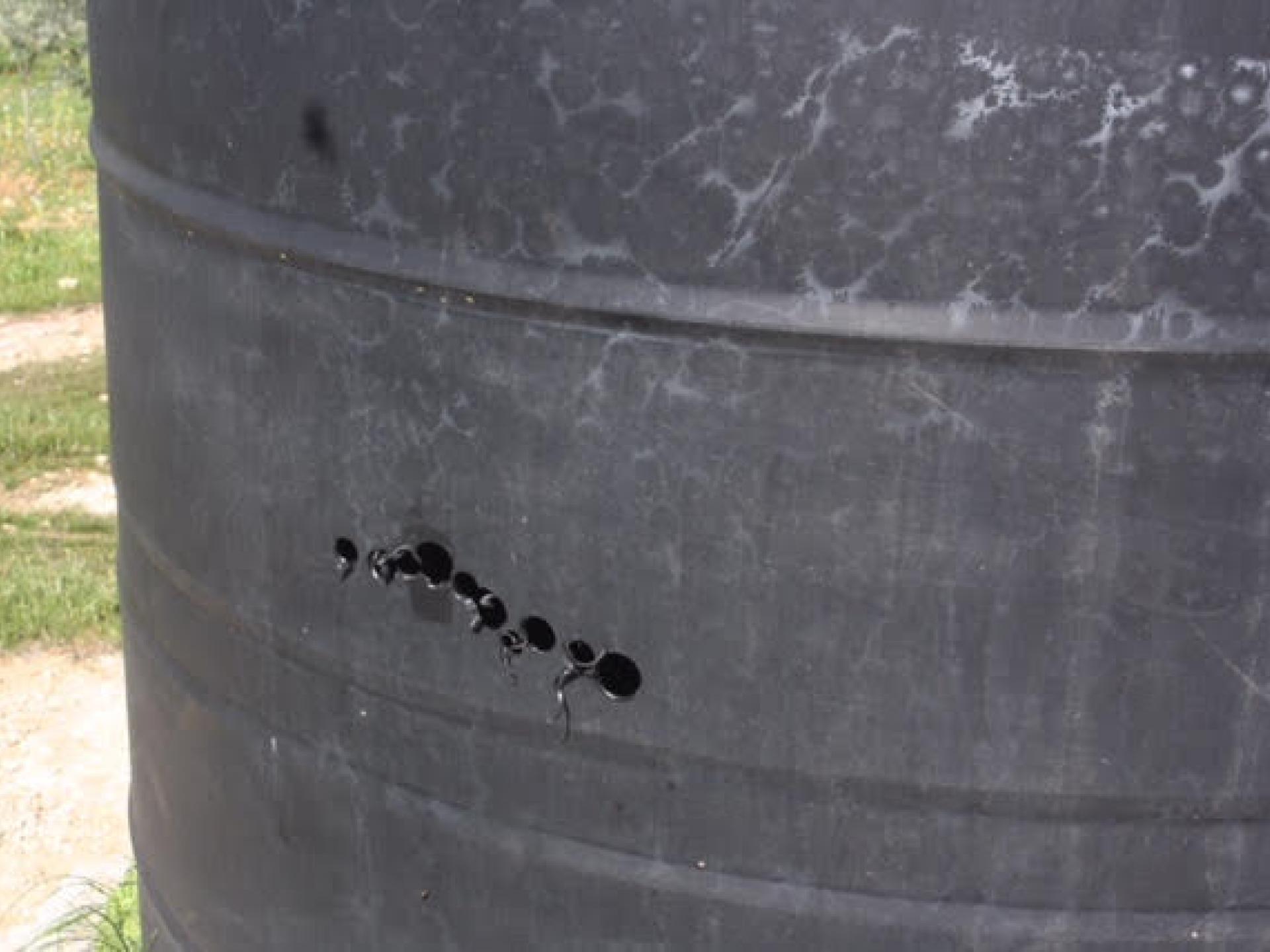 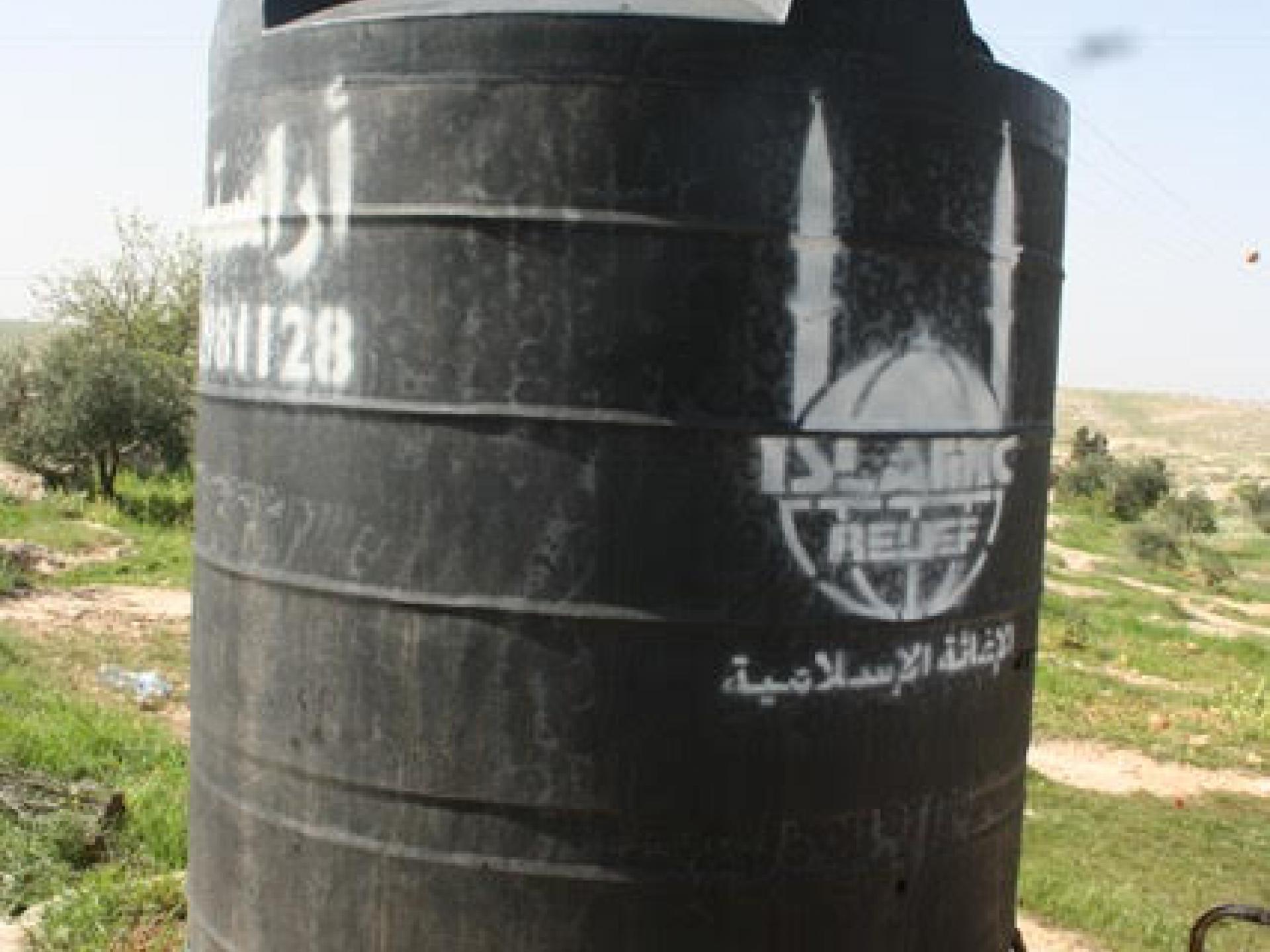 Another man and his wife have been living on their own land since they were expelled from the original village. The plot is charming: it has ornamental flowers in tires, jugs and crates, barley, almonds, olives (if they were irrigated they could grow more), some farm animals

, and of course wild plants.

We sat under a shade awning, and we talked. He described to us the unending legal saga since the expulsion from the original village (1989). The buildings are always in danger of being destroyed, including the doghouse, including a shed for chickens and pigeons. Lately he has been ordered to demolish them or that they would come to do so and it would cost him 10,000 shekel. They presented the Civil Administration with a number of plans, but the plans were rejected on various grounds, because of rules that can not be met, the distance of farm animals 300 meters from the road but also a certain distance from the houses. A court order  has recognized his ownership, but under the authority of the  Ministry of Defense's concerning the  planning, and since Liberman entered the ministry, the plans in the negotiations have been thrown out and not approved. However, the demolitions were slightly delayed. Instead of demolishing 40% of the buildings now, as they intended, 7 buildings will now be demolished, and the others will be re-discussed later (i.e. are still under threat). Major General Poli Mordechai told him that they could ask for certain rights, but that they should not try to compare themselves to Israelis. Palestinian Authority representatives come to visit, but have no authority to do anything, since this is Area C which is under Israeli control. We also compared how much we pay for water, and how much they do and indeed there is no comparison - they pay more than 10 times the amount  for a  much smaller quantity. Each cube costs NIS 35, and is enough only for a day or two for the needs of the family and the farm.

There is a female settler living in a building, apparently prefabricated, at the edge of the Susiya settlement (which is constantly expanding and approaching), who came to them and threatened them with a pistol. The soldiers took her away, but did nothing more than that. Every Thursday, during the exchange of soldiers, the incoming shift receives a tour and instructions from the security guard of the settlement and not from the military commander!

P. frequently hosts groups of Israeli activists, and tries to understand from everyone how to solve their problems and promote peace.  He is very disturbed by the fact that young Israelis do not know the situation in the area and only, in many ways, get the message that the Palestinians are terrorists.  In particular, he mentioned the large red signs warning Israelis not to enter the area A  and declaring they are in danger if they do so. He emphasizes that he has no one to guard him and he has no one to turn to. He is also very concerned about his son's safety. He keeps the phone open every day in a conversation with the driver on his son's way to school, and repeatedly warns his son not to leave the school yard. He is certain that the conflict can be solved in a few minutes of conversation over a glass of water, according to the principle that anyone who cares for the safety and rights of the other can also live in security. He does  not believe that such a solution will be implemented in the coming years. Perhaps even thousands of years ... and admits that sometimes when talking to groups, he gets angry and excited and his voice rises ... Israelis and the rest of the world are preoccupied with threats and distant conflicts, and the situation is deteriorating.