A kindergarten opposite tree uprooting in Umm al Kheir 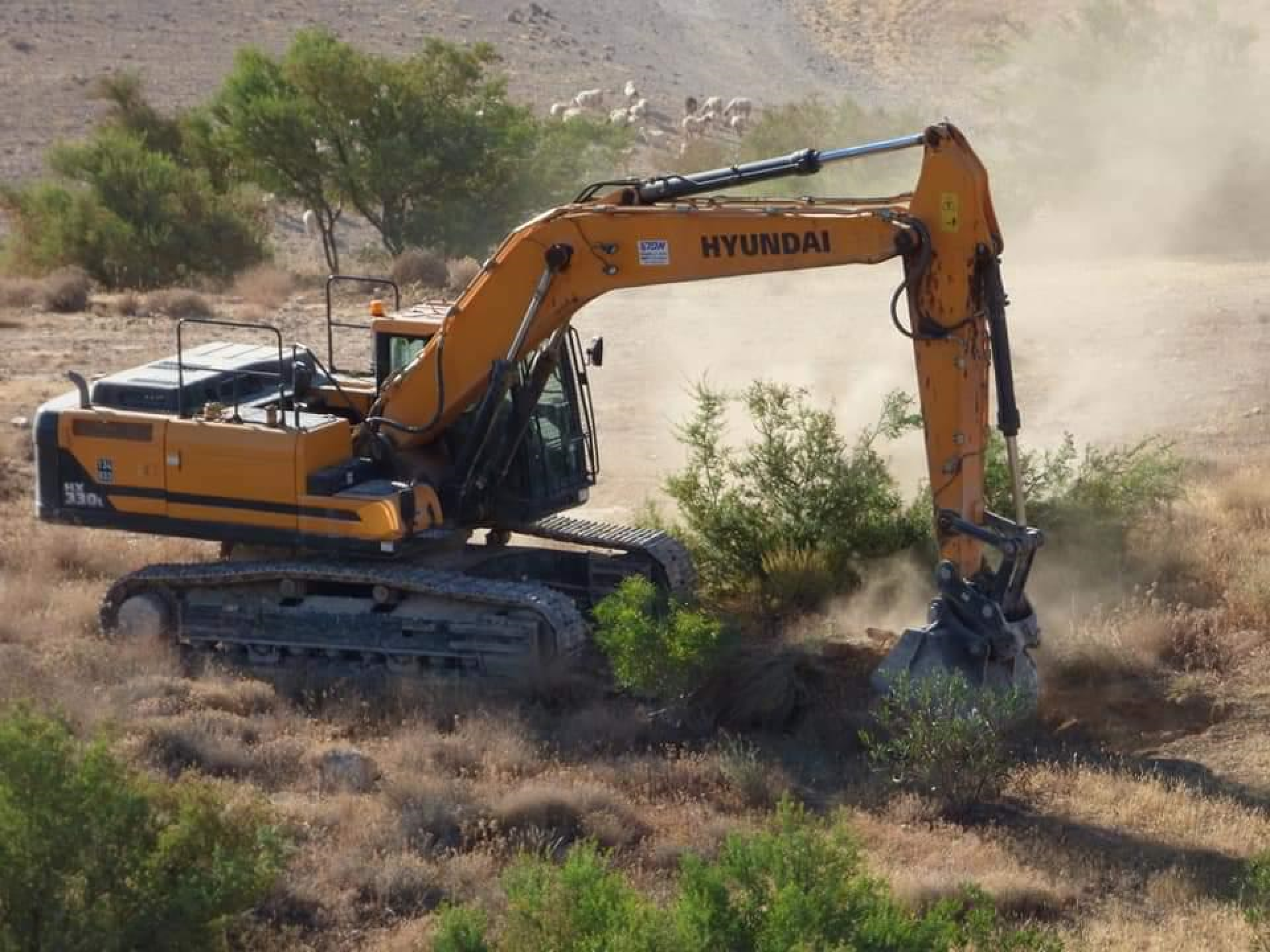 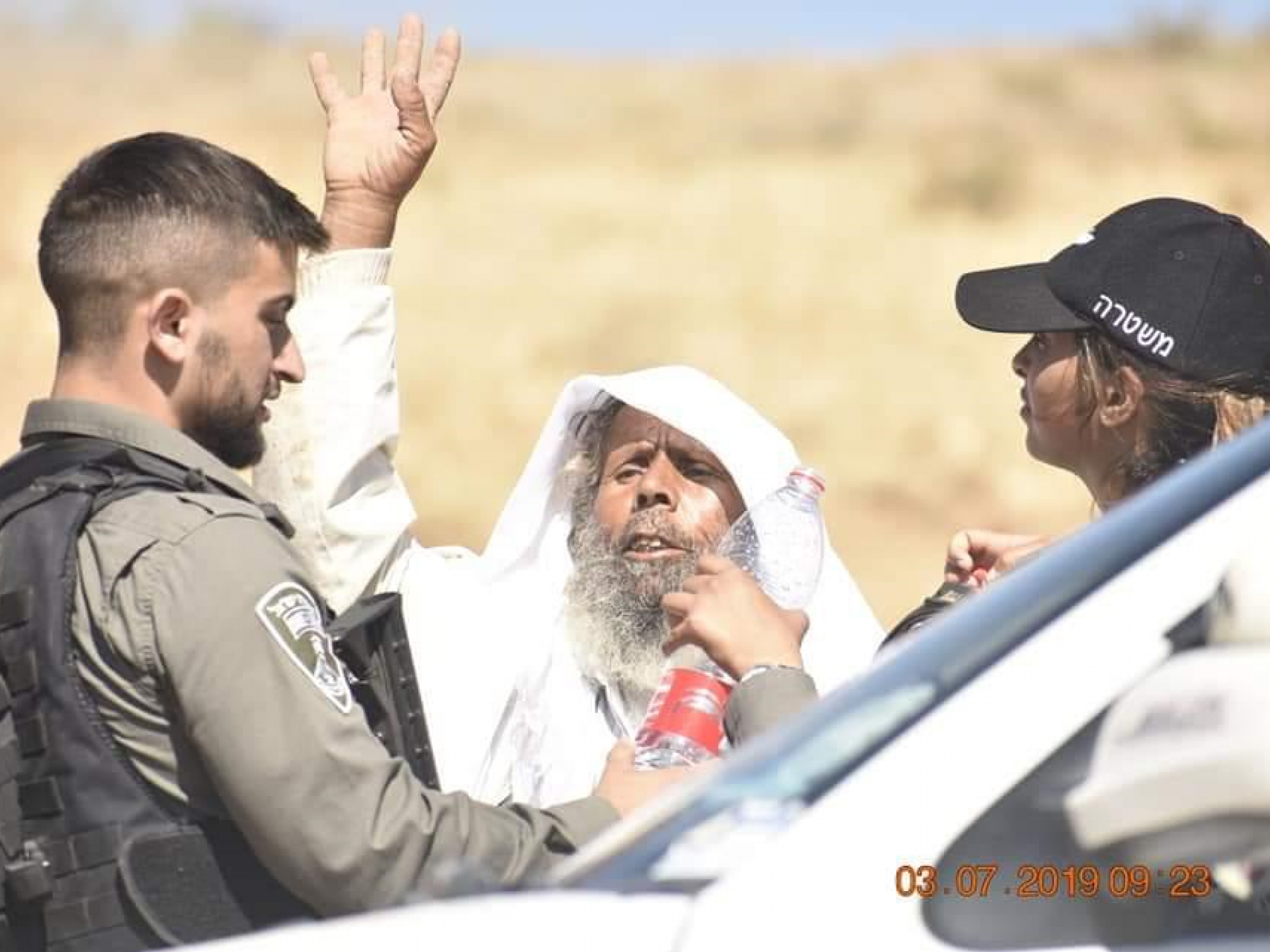 Purpose: A meeting in Umm al-Kheir with Aziz on the subject of  reopening the kindergarten. Fatma,  i the school principal at Zanuta who  also organizes the training of kindergarten teachers in Hashim-al-Daraj.

In front of Ma'on, we saw bulldozers, tractors and a police car. Muhammad immediately guessed there was a demolition somewhere. Indeed, when we arrived at Umm al-Kheir we were told that yesterday the authorities uprooted 600 trees in the area beyond Umm al-Hir (east). The area is a nature reserve, with trees 16 years old. Today they uprooted 300 trees in the area near Degeiga (also beyond Umm al-Kheir), and destroyed 2 water cisterns stored with rainwater (in the middle of summer, in the desert!). Everyone in this area knows that the land is exposed to the sun, there is no shade, and there is almost no natural vegetation. It breaks one’s heart ! We also tried to understand the rationale behind all these resources invested in uprooting trees. No one had an explanation.

A meeting about the kindergarten in Umm al-Kheir: The meeting is attended by Aziz from Umm al-Kheir, Fatma, the principal of the school at Zanuta, Muhammad, and Mira. Later Dalal, who served as kindergarten teacher, joined the school until it was closed a year or more ago. Hamed from Hebron was to participate, but was abroad.

History of the Garden: In the past, a kindergarten was run in Umm al-Kheir, with kindergarten teachers Dalal, Ikhlas and Naama from Umm al-Kheir. The kindergarten was supported by the village group, and we carried out  a number of activities there and helped with the equipment. The kindergarten operated in a building belonging to Yusuf, the mukhtar of Hashim al-Daraj. In the wake of an internal conflict, Yusuf withdrew his consent to give this area for the kindergarten , so it  was closed (the building stands empty and neglected). Umm al-Kheir is divided into two separate sections, one just below the Carmel settlement, and the other facing more towards the desert. The kindergarten structure stands right in the middle, between the two parts.)

Later, residents of Umm al-Kheir in the area bordering the settlement of Carmel tried to build a garden in their section: They built a small playground and a structure from an old bus and a trailer, but these were demolished, and the efforts were unsuccessful.

Now Aziz decided to promote the kindergarten issue, so we held the meeting. The goal is to maintain a multi-age kindergarten - ages 3, 4 and 5. We discussed the various possibilities. It seems that in order to receive support from the Palestinian Authority, it can include only children from the age of five, and only within the framework of the local school (because this is Area C, which is under Israeli control, but the agreement is that the authority is responsible for the schools). There are 2 schools, but there is no place for a kindergarten. Therefore, the options are either a garden in the structure of Yusuf, which will serve the two parts of Umm al-Kheir - about 45 children, or a garden only in the part where Aziz lived, under the Carmel settlement, about 12 children. Aziz is now renovating a trailer building and an old bus building, setting up an impressive playground, and framing the fence. The renovation, very impressive, is supported by various foundations, including NGOs and YMCA. They hope that the renovated compound is protected from demolition because they have been able to submit a development plan to the Civil Administration.  Even this submission is an achievement, because in the past the administration refused to accept such programs. They hope that the very submission of the plan, first, already determines that this is Palestinian territory, and now the discussion is only about its borders. Second, it protects them from demolition. Let us hope that it is so. The greatest threat to them is from the Regavim organization that is working against them.

In the coming weeks there will be a meeting with Yusuf, also  with Hamed - we will try to work with Fatma, and perhaps someone from our organization. If they agree on the structure of Yusuf, it will be excellent. Then, with the help of Hamed, they will also arrange transportation for children, because the distances are great. If there is no agreement, the garden will be opened in a limited format, only in the compound below Carmel settlement. We hope to get into the picture, however, with the help of the teachers and Fatma, organizing activities, and helping with equipment.