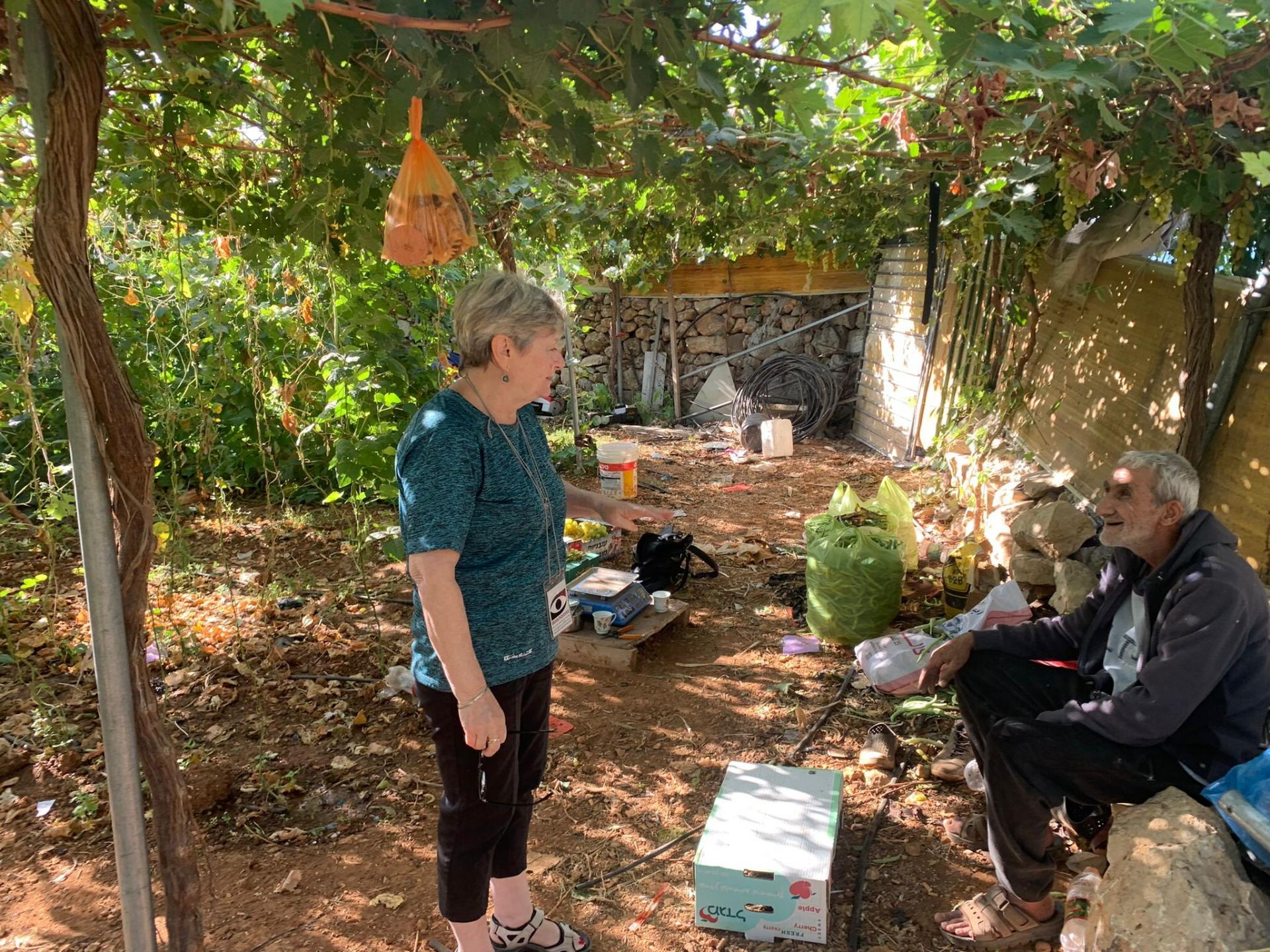 Hebron - Ata is telling what is happening 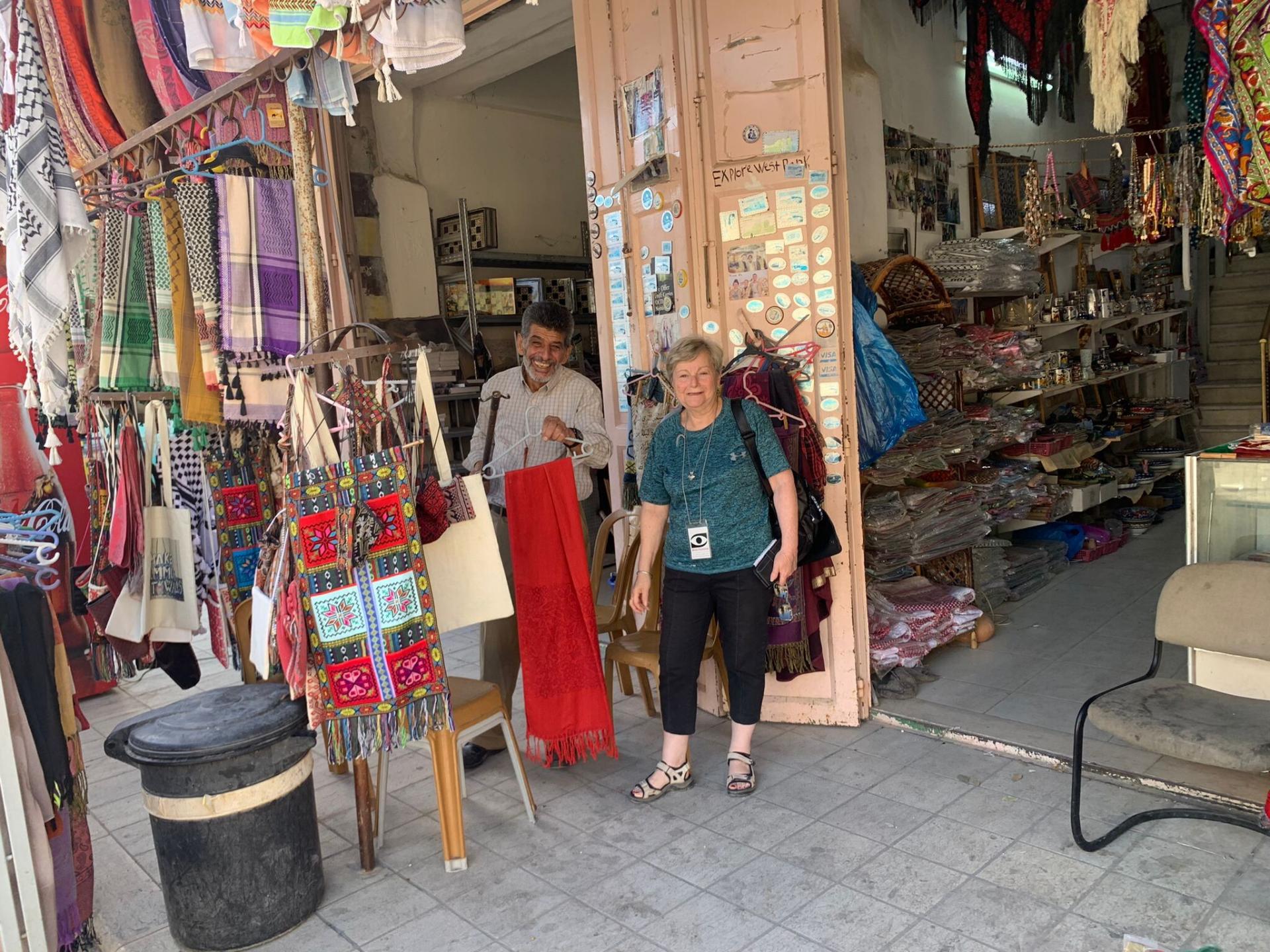 Hebron - with Abed in his shop

There is nothing new along the entire drive on Route 60.

About a kilometer from Al-Fawwar, in front of the spring, a military van
stands near the post, which is not manned.

Qilqis -- open on both sides.

At the southern entrance to Hebron in front of Bani Naim, there is a
military jeep. Another jeep half a kilometer away.

We stopped to visit Ata Jaber at the northern entrance to Hebron, who picks
grapes on his property, for grape honey and other products, and beans which he
sells in the market in Hebron. He says he was fired about a month ago, after 5 months of work, at the Rami Levy branch in Ashdod. They claimed he was too old.

I ask what about the settlers who often come to disturb and harass, this is still happening.
The house of his mother and brother (Jaushi) is located in front of Ata's area. Givat HaHarsina was built above their house. The settlers throw bottles and stones, mainly young people. The police came but did nothing. There is new construction in Givat HaHarsina. The area below it belongs, according to Ata, to his family.

In the House of Contention there is a new kiosk. On the way I see 2 foreign women and a man with tags. We stopped. I talked to them, and it turns out they are from the UN. They
are patrolling. I told about the MachsomWatc  and what we have been doing in the occupied territories for years. I expanded on Masafer Yatta and the area. I blessed them for reporting to the world about what is happening there and I received a blessing back, for our activity.

We arrived at Abed’s, at his shop in front of the Cave of the Patriarchs. Not far away, a class of religious girls receive an explanation from teachers about Hebron.

Abed tells about the bad condition of his sick wife who was treated in Jordan, and he was hospitalized due to dehydration.

It is said that settlers celebrated en masse and for that reason they did not allow Muslims to enter the Cave of the Patriarchs. He has no livelihood because there are almost no tourists. Heart pinched.

We continued to the grocery store of Kafiza. He also tells about settlers who marched accompanied by the army from Kiryat Arba into his neighborhood (Wadi Al Rus neighborhood). A boy who came to shop at the store told us that soldiers pushed him but he was not arrested.

We went to check the sidewalk which they had destroyed at the entrance to Givat HaMevaser on the way, most of the shops are closed.

The sidewalk was partially repaired.

Muhammad receives a message about the demolition of a house in Al Rafia not
far from the Zif intersection. Later it became known that on that day they destroyed houses in three villages.

In the Carmel settlement, construction is progressing. This can be seen from the road.

We notice the soldiers at the entrance to Samu’ and there is a bulldozer working to build piles of dirt to close the entrance.

From the At-Tuwani area onwards, up to a rope barrier, earthen embankments have been erected to prevent exit and entry.

The entrance to Abu Safi was also closed. They are not allowed to go out and buy groceries and water.

This too was later published on social networks.

Occupation everywhere. You can’t miss it.