Qalandiya - A very busy morning probably due to a computer malfunction 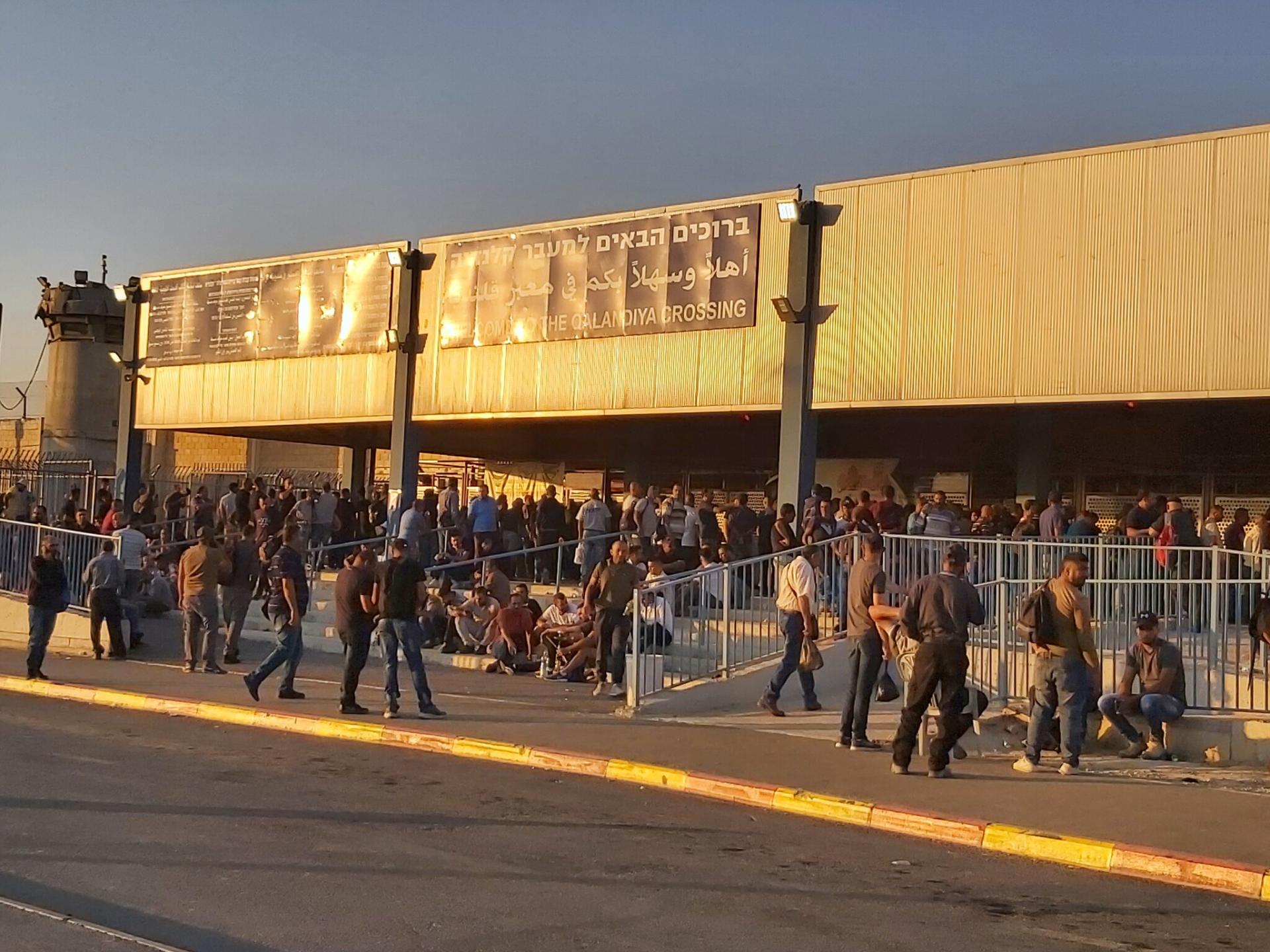 Photographer:
Ronit Dahan-Ramati
The shed in front of the checkpoint is wearily laden 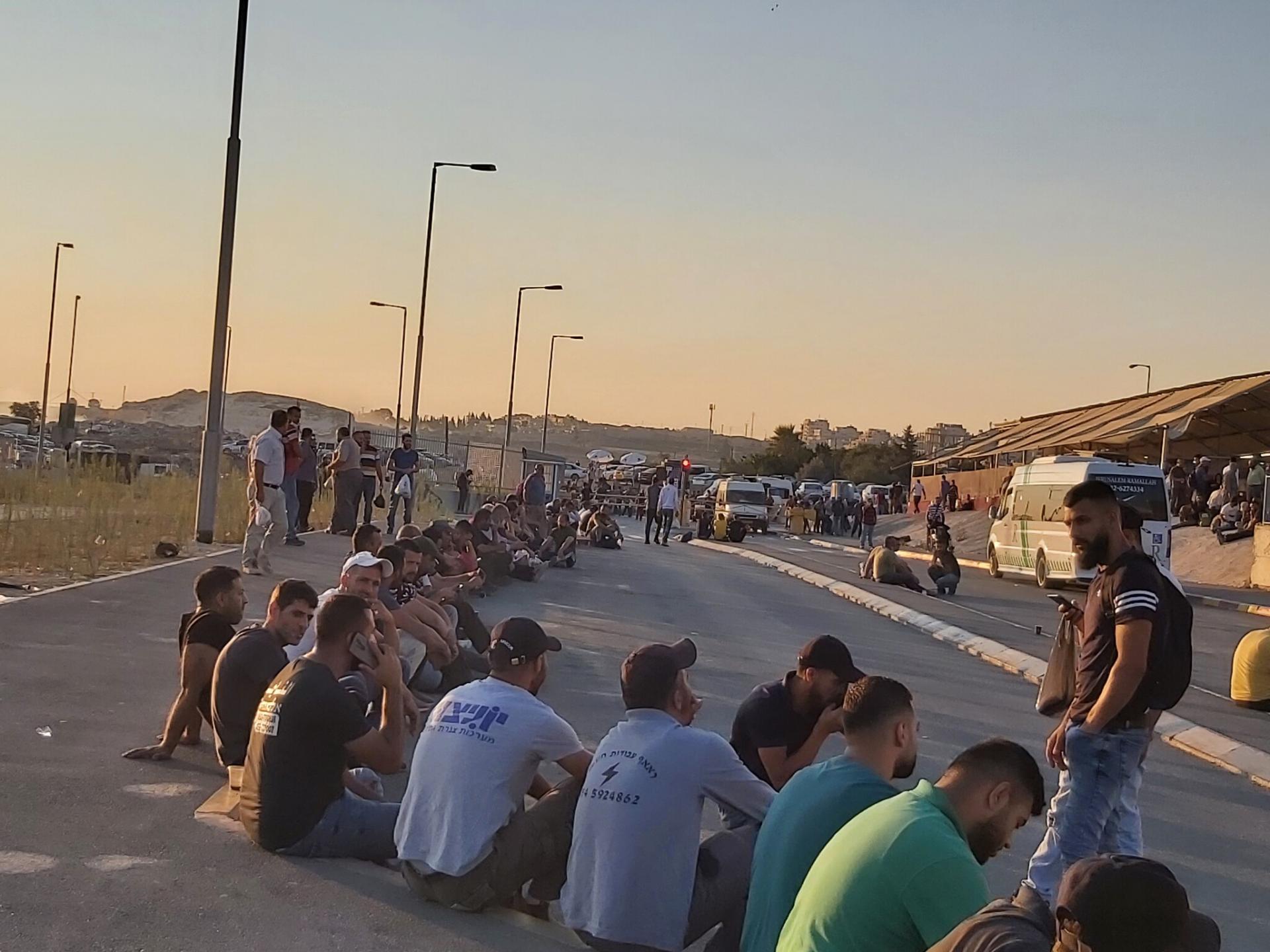 Waiting on the sidewalk in front of the checkpoint

Photographer:
Ronit Dahan-Ramati
Sitting and waiting on the curb in front of the shed 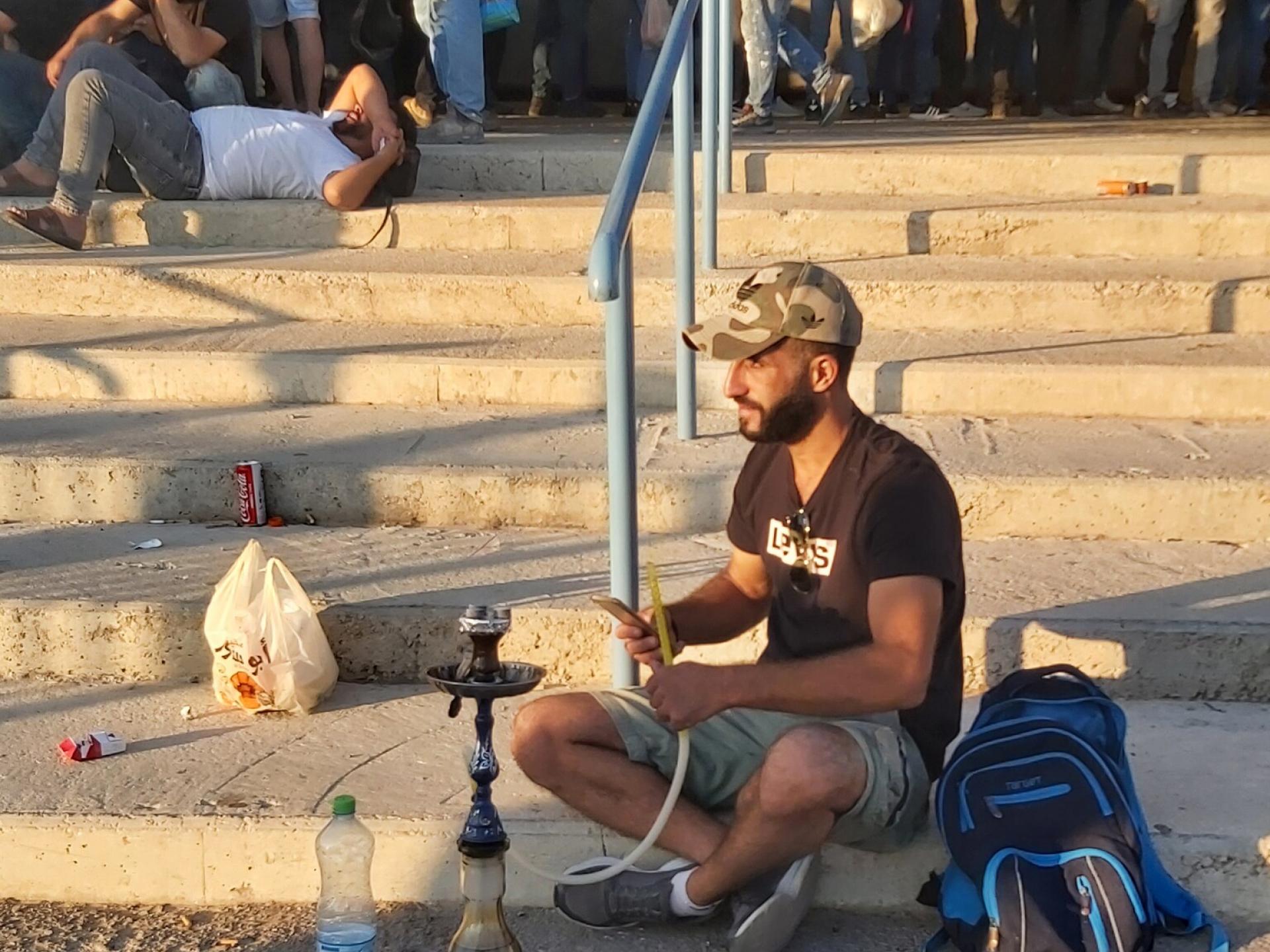 Photographer:
Ronit Dahan-Ramati
And there are those who, instead of getting upset, smoke nargilah on the steps of the checkpoint ... 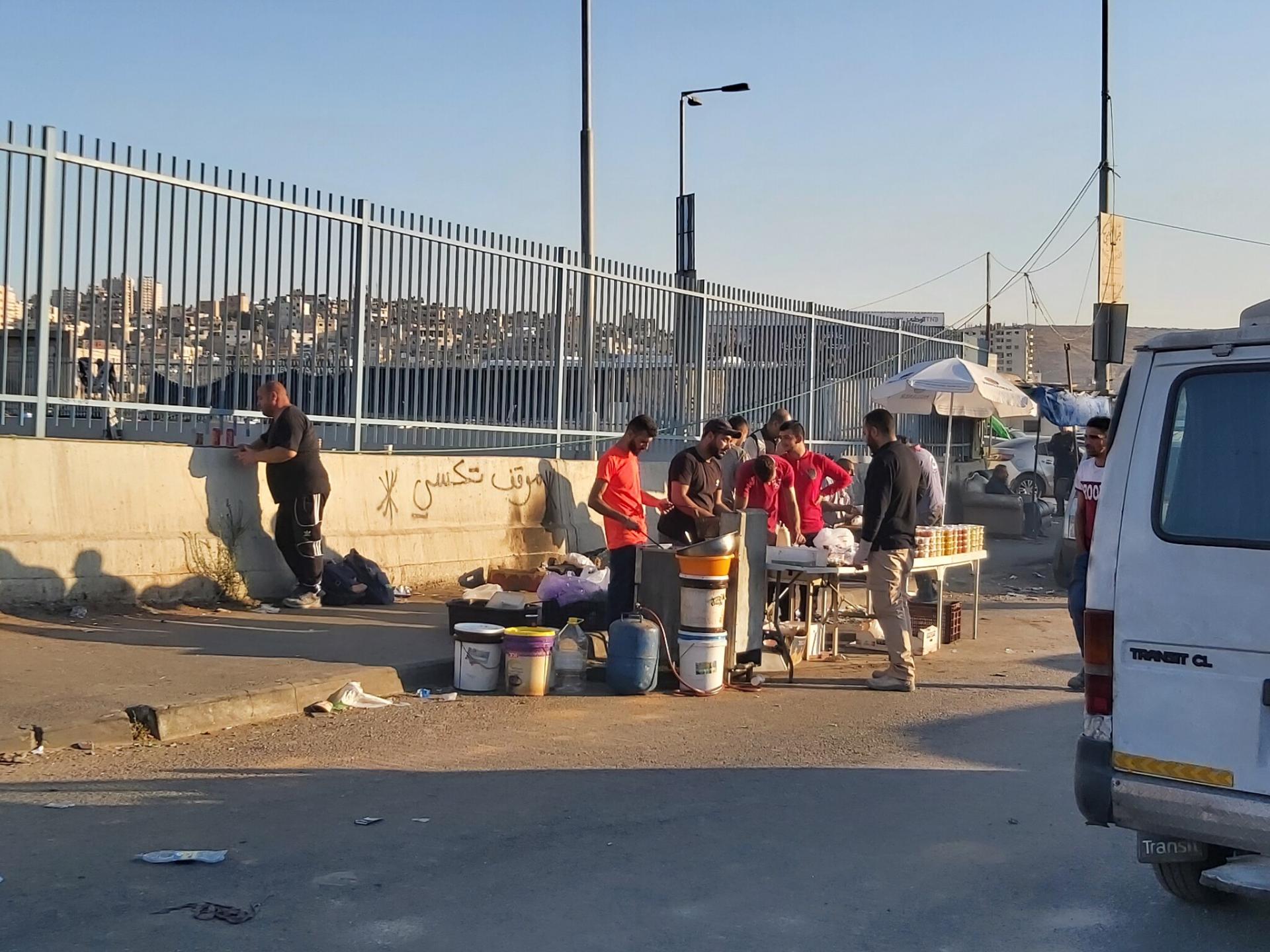 Photographer:
Ronit Dahan-Ramati
A stand for the sale of falafel and other foods at the entrance to the checkpoint compound 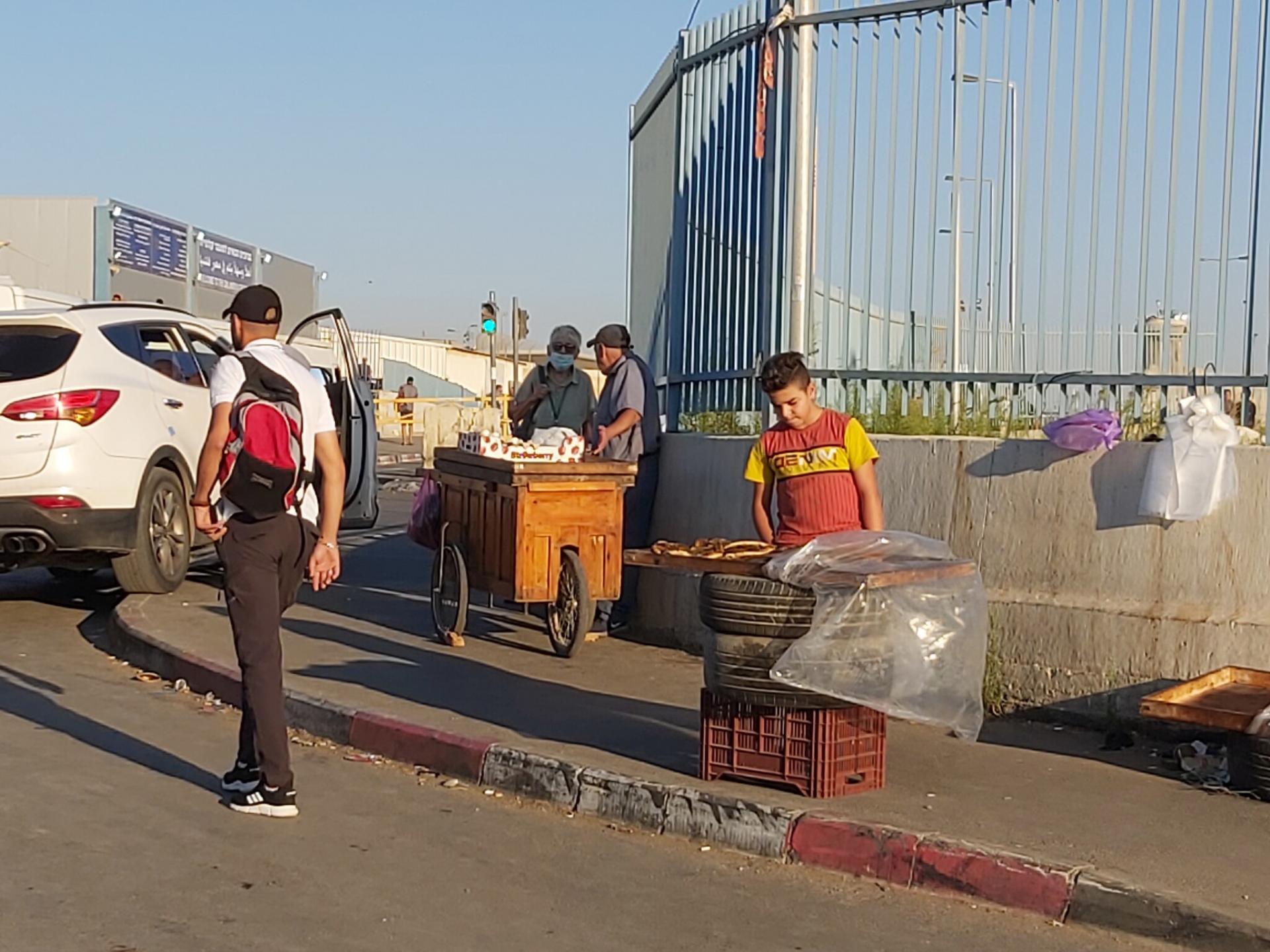 Photographer:
Ronit Dahan-Ramati
At the entrance to the checkpoint compound, Hanna Stein is talking to Abu Ramzi and next to them is a boy selling pitas 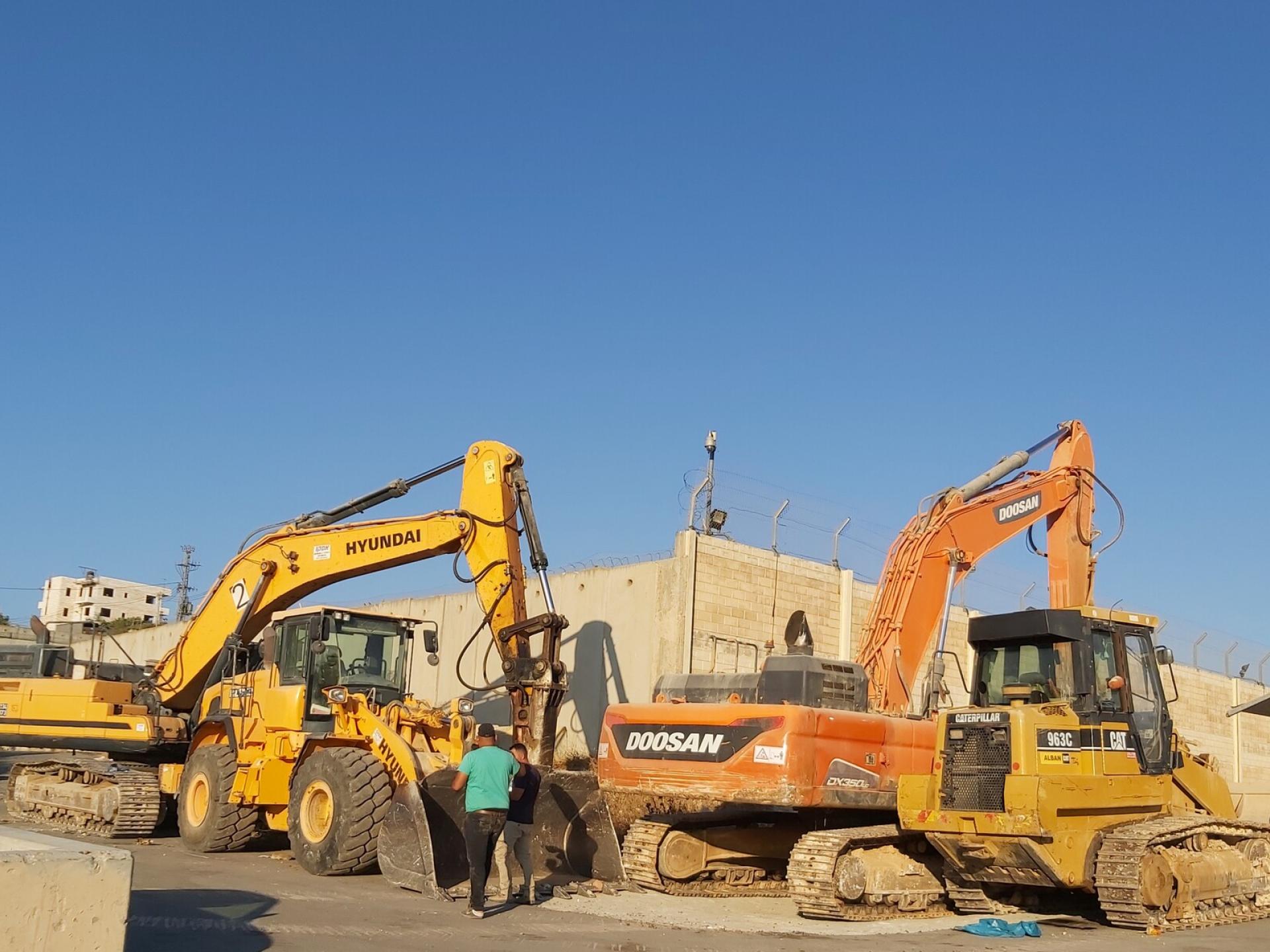 Photographer:
Ronit Dahan-Ramati
Heavy mechanical equipments on the eastern side of the checkpoint

A crowded morning at Qalandiya

06.15. On the Israeli side, there were already many people waiting for transport to work, sitting on the low bench next to the Wall.  The public transport parking lot is full, with buses actually parked close to the beginning of the pedestrian bridge. We meet many people on the bridge, some telling us that there is chaos in the checkpoint where passage has been stopped. This seemed strange because if the checkpoint was closed, how could there be so many who had passed through?

When we reached the Palestinian side we found the checkpoint porch and steps crowded.  People were sitting on the steps and more kept arriving from the parking area on the east side. When entrances showed green lights occasionally, we heard shouts and saw pushing that we hadn't experienced for a long time, with young folk jumping over the fences of the 'slalom' before the turnstiles, as in "olden times."

At first, we could not understand what had happened. We were told that yesterday everything ran smoothly.  There was a rumor that the delay was because of a lack of masks – but for a long time now masks have been necessary inside the checkpoint and there is always a person selling masks as needed.  But later we found the real problem was a breakdown in the computer – and our informant said a friend of his at the Bethlehem checkpoint told him there was the same problem there.

A man arrived accompanying a woman in a wheelchair. On a normal day, the staff inside would see them on their camera

and come out to open the special door so as to avoid turnstiles. We phoned the D.C.O, a number that we had.  The soldier who answered said she wasn't at the checkpoint but would try to find help and that we should call again in 10 minutes. She didn't seem to know at all how the checkpoint looked from the Palestinian side.  We called Hanna Barag to ask if she had an alternative phone number to call but she didn't. We phoned the same soldier again after 15 minutes.  She said that because of the crowds it was difficult to help (again it was clear she didn't understand the procedure at all). While we were talking a security guard arrived via the side door. It wasn't our calls that brought him – her husband had entered the checkpoint himself (the people in line had let him go ahead) to ask that the door be opened! He came with the guard and the two of them took his wife in, with our good wishes…

We went to see Abu Ramzi the beigel-seller, after not meeting a long while.  Once again he had with him a grandson who at that moment arrived with a fresh-from-the-oven batch of beigels.  This eastern side of the checkpoint was full of cars bringing and collecting people. And more kept coming. Only public transport vehicles can enter the parking area in front of the building itself.  Crowds were milling around waiting for the pressure at the checkpoint to lessen. There are little kiosks selling felafel and snacks on the pavement. Close to Abu Ramzi was a boy selling pitot with oil and zaatar, and on the opposite side of the road, the usual tea kiosk in a commercial vehicle was open.

Abu Ramzi said Id el-Adha was "be-seder".  Soon he will be having another eye operation. It seems the earlier one was entirely successful.

We went back to the building via the passages that had been prepared for Ramadan.  There we saw two large tractors ready for work. We didn't know their particular purpose, but it is interesting that a man told us there is a plan to build more road where the current vehicle entry is to the checkpoint.  This is a big project which will take 3 years and during that time, according to him, the traffic will go through Himzeh!  Considering how heavy the traffic is through Himzeh anyway with settler cars,  this sounds very strange. We will have to get more accurate information.

Gradually the queues started entering the checkpoint and people sitting on the steps began joining them. By 7.15 there were hardly queues and people who had been waiting at the eastern end joined them.

The electronic document-checking machines were all working and people were passing through without delay – as we also did. Altogether it took us 15 minutes to pass and by 7.35 we were through. There was no one to ask what had caused the delay earlier.

On the way to our car, we again met Y. whom we wrote about in earlier reports (30.6.21, 27.5). Sylvia has asked again for his 'refusal' to be canceled but was refused. He has to continue passing with special permits in spite of his refusal at Givat Zeev . We spoke about the documents he has sent and hope he will renew his permit before his present one expires on 21.8. We can't understand why they keep him refused entry even though he anyway is allowed to come into work. After all, if he planned to do harm he could continue from Qalandiya to do so anywhere in the country, and not to return to Givat Zeev  (close to his home in Bidu)  to work …

We were approached by a man who said Sylvia had helped him in the past – and now needed help for his son – 25 years, married and with a child – who had been in goal a year ago … We gave him Sylvia's details again.