We arranged a meeting with members of the Far’oun municipal council, at their request.

We stopped in ‘Azzun at our friends’ shop.  There were no soldiers at the entrance to ‘Azzun.

We went through the Jubara checkpoint, intending to reach Far’oun via Shufa. We encountered a military checkpoint between the two parts of the village, this time not just barriers erected on the access road to the village, but a permanent position, with an inspection tower, and soldiers (it turned out they’ve been there for two months) restricting the villagers’ freedom of movement, separating farmers from their lands and dividing family members who live in the two parts of the village.  The checkpoint also prevents residents of Far’oun, the neighboring village, and of the surrounding area, from accessing the main road by the shortest route, and forces them to drive dozens of kilometers through Anabta. 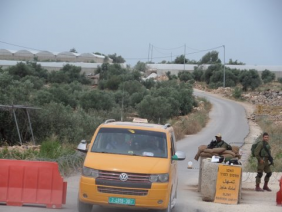 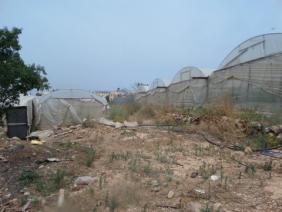 We returned to Highway 557, left our car with the Machsom Watch banner by the roadside and climbed up the hill, between Shufa’s greenhouses,  guided by S., our host from Far’oun,.

When we reached the top we met three more people from Shufa and after consulting with them decided it wasn’t safe to leave the car by the side of the main road below, because the soldiers might move it, or even worse, announce that two Israeli women had been kidnapped on the West Bank…

We have a problem.  If only Were it possible to get on Highway 574 are drive north to Far’oun, because the distance is very short.  But there’s occupation and fences and roadblocks and unnecessary difficulties getting from place to place.

We descend through the greenhouses to the road and the car, drive to upper Shufa, to the east, and park beside the municipal building. Now we wait for a ride to where we’d previously left the car, to climb up again among the greenhouses.  Basic training for senior citizens…  On the way we see piles of discarded cucumbers.  Why?  They ripened too quickly in the hot days before they were harvested and people won’t buy them because they’re too big.

And we’re also shown a demolished reservoir that contained 450 cubic meters of water.  Another act by a cruel occupier, two years ago. 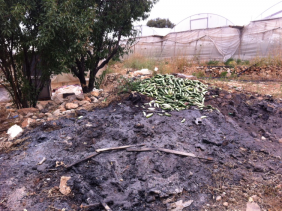 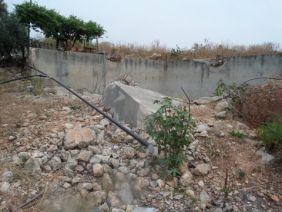 Finally we’re on our way to the Far’oun municipality.  Blacklisted Palestinians arrive and we record the information to check with the DCL and determine whether to pass the cases on to the Moked.  There’s no end to the stories.  One had his permit confiscated because they said explosives were found in his car.  He said he’d left it on a very rainy day next to the gate, there had apparently been a short circuit and a fire started.  Firemen arrived from Tulkarm and put it out.  He’s 45, with heart disease, and asks:  what would I do with explosives?  Why would I set fire to my own car?  What sense does it make?  But who expects the occupation to make sense.

Many have problems with lands not registered in their name, but in that of a deceased father.  Registration in Qalqilya is very expensive if the father had a number of sons and daughters who inherited the land after his death.  They can’t afford to transfer the registration to their names.  Prior to the walls, the fences, the roadblocks and the gates

that never open, they divided among them the land they’d inherited and had no problem cultivating it.  Today everything’s very complicated.

Their request:  Gate 708 in Far’oun opens only three days a week, twice each day.  They want it opened three times a day, especially during Ramadan.  People are thirsty and aren’t able to remain all day long in the fields.  We’ll transmit the request to the Moked.

There’s a small settlement between Shufa and Far’oun – Avnei Hefetz.  During the five minutes we drove in its vicinity three buses entered and left.  A taxi was ordered so we could return to our car in upper Shufa, because our escorts aren’t allowed through the checkpoint.

We return through the Jubara checkpoint – Te’enim crossing, intended solely for Israelis.

We went on today’s final mission: A resident of Tayibe leases six dunums from a landowner in Tulkarm and st

ores on it piles of sand for construction.

He recently took over dozens of dunums of agricultural land where residents of Far’oun grow za’atar, avocados, olives and other crops.  He arrives with a truck and dumps piles of construction rubble, including asbestos, which is dangerous to health.  It’s already difficult to access some plots of za’atar.  The area is between Far’oun and Sha’ar Efrayim. 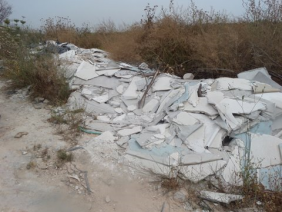 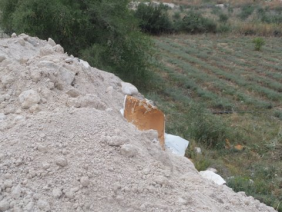 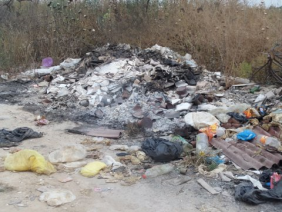