We conducted a brief tour for a new member whose scheduled tour had been cancelled, and returned to the Falamya checkpoints.

11:30  After visiting Elkana, the Maskha checkpoint (Hani’s house) and the Oranit checkpoint, and explaining about the separation barrier and the seam zone created as a result of the “annexation” of the settlements we drove north on highway 444 to highway 55.

Eliyahu checkpoint:  No trucks with seedlings at this hour.  We spend considerable time at Z’s, not only to unload goods but also so that the new members will learn about him first hand.  The children were in the home, which was very cold, and his wife insisted on offering us tea even though she appeared very ill.

We continued to Falamya describing what we passed, including Jayous and the other villages along the road to Tulkarm.

13:45  Falamiya north (914).  The gate was already closed when we arrived, the soldiers in the military vehicle, and we also continued to Falamiya south (935) which mostly serves residents of Jayous.  It was an opportunity to show Rachel and Amala the varied and flourishing agriculture created in the area returned to the farmers after the fence was relocated to the west.

We arrived a few minutes before the gate opened.  Only a tractor pulling a wagon and a large truck were there.  One of the farmers said he (?) doesn’t have any problems now with permits.  He went directly to the Israeli DCL in Qalqilya.  Others apply for permits through the Jayous municipality. 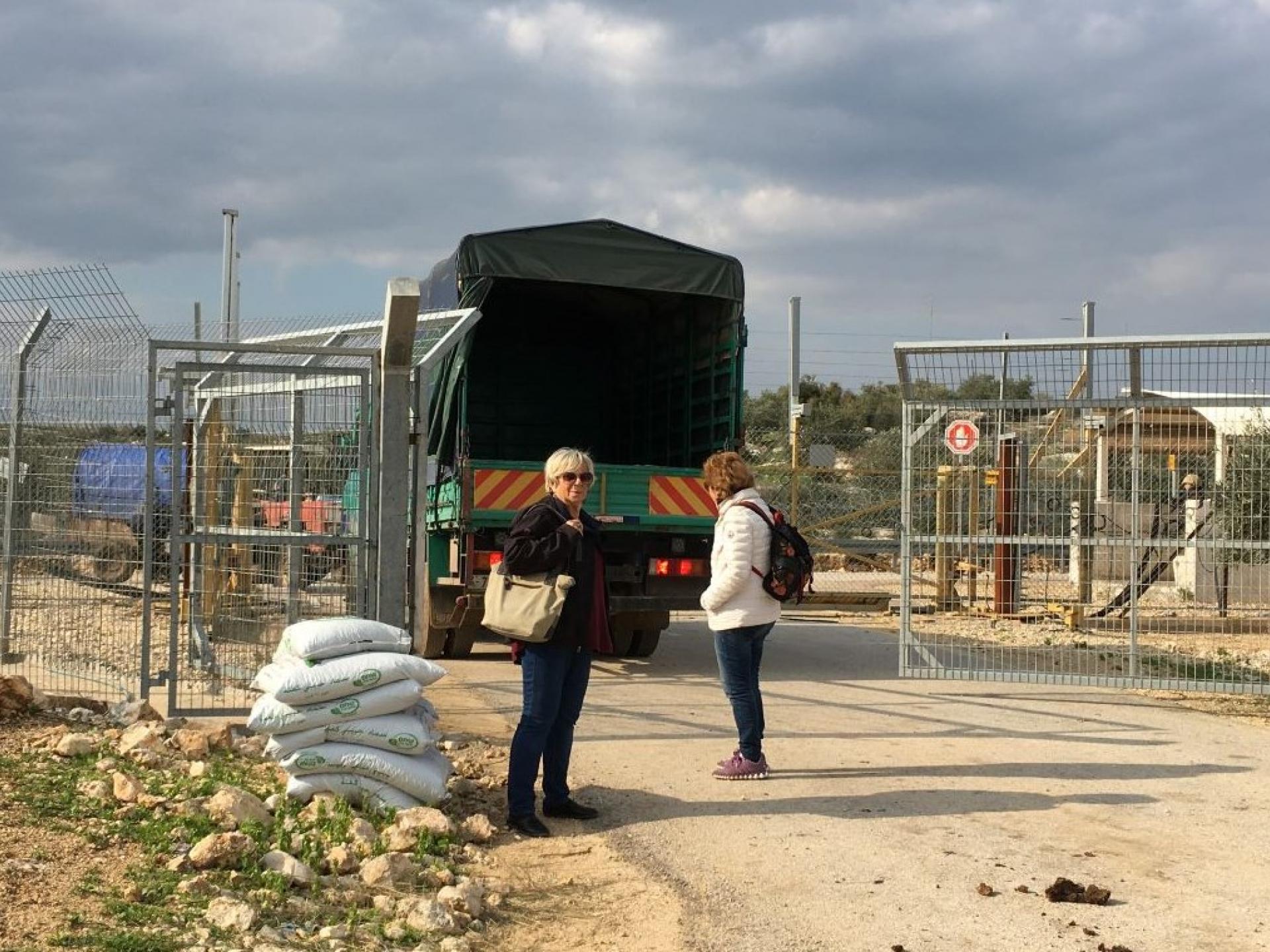 Near the gate in Falamiya South
Photographer:
Karin L

A pile of sacks lay near the gate – fertilizer, apparently.

The truck had already gone back the way it came.  The driver must have been allowed to bring the sacks to his land in the seam zone.  Three armed soldiers stood beside him and inspected each sack he loaded onto the vehicle.  At one point the allotted quota had apparently been reached and the truck driver continued to the seam zone, leaving the remaining sacks by the roadside.

Only one tractor and two farmers entered, and at 13:40 the soldiers closed the checkpoint.

We returned via the former security road to Jayous and by the time we reached Habla the checkpoint had closed.