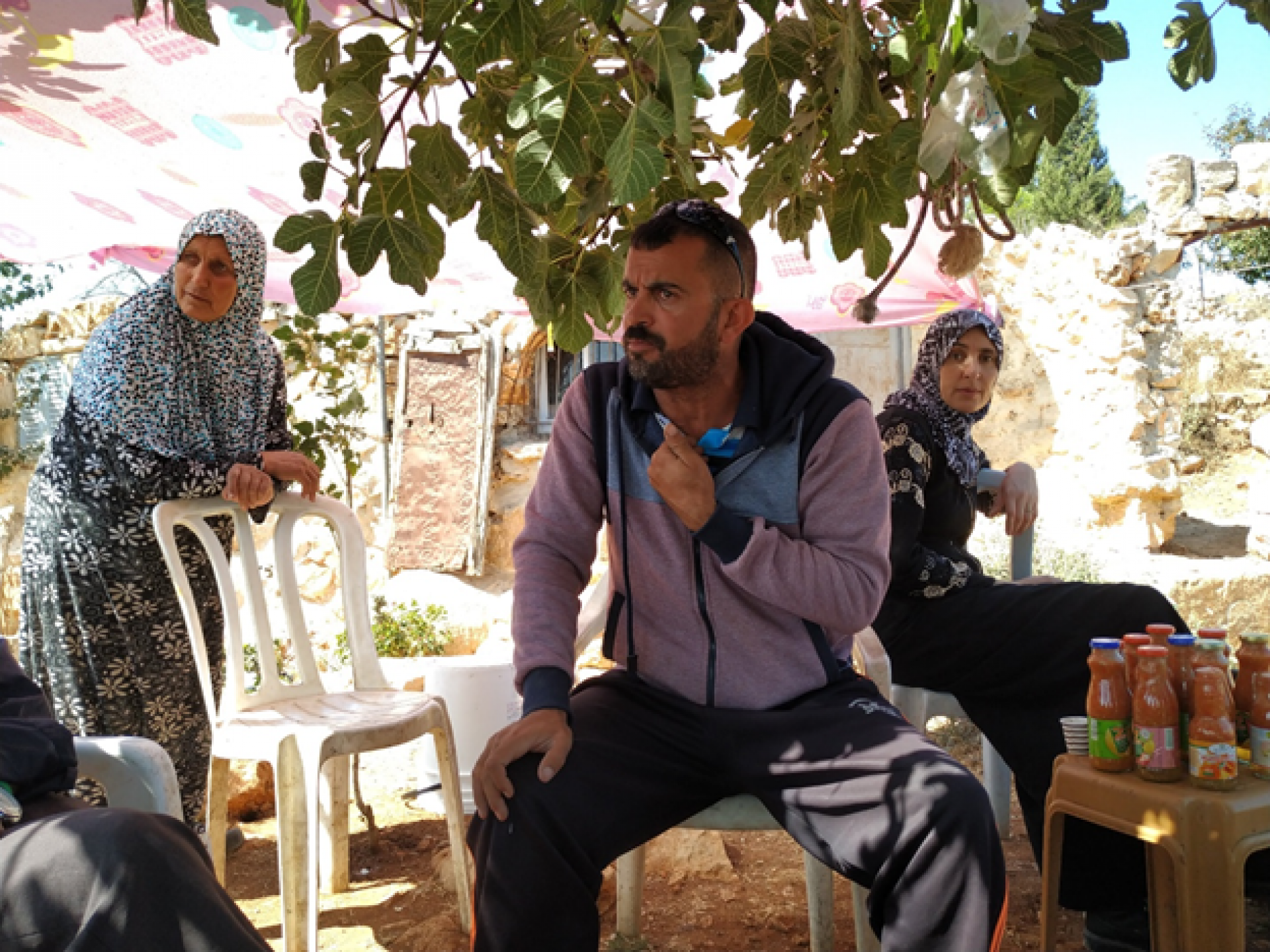 Qureit Shushhala: in the shade of the fig tree, amidst primeval landscape looking out at Herodion 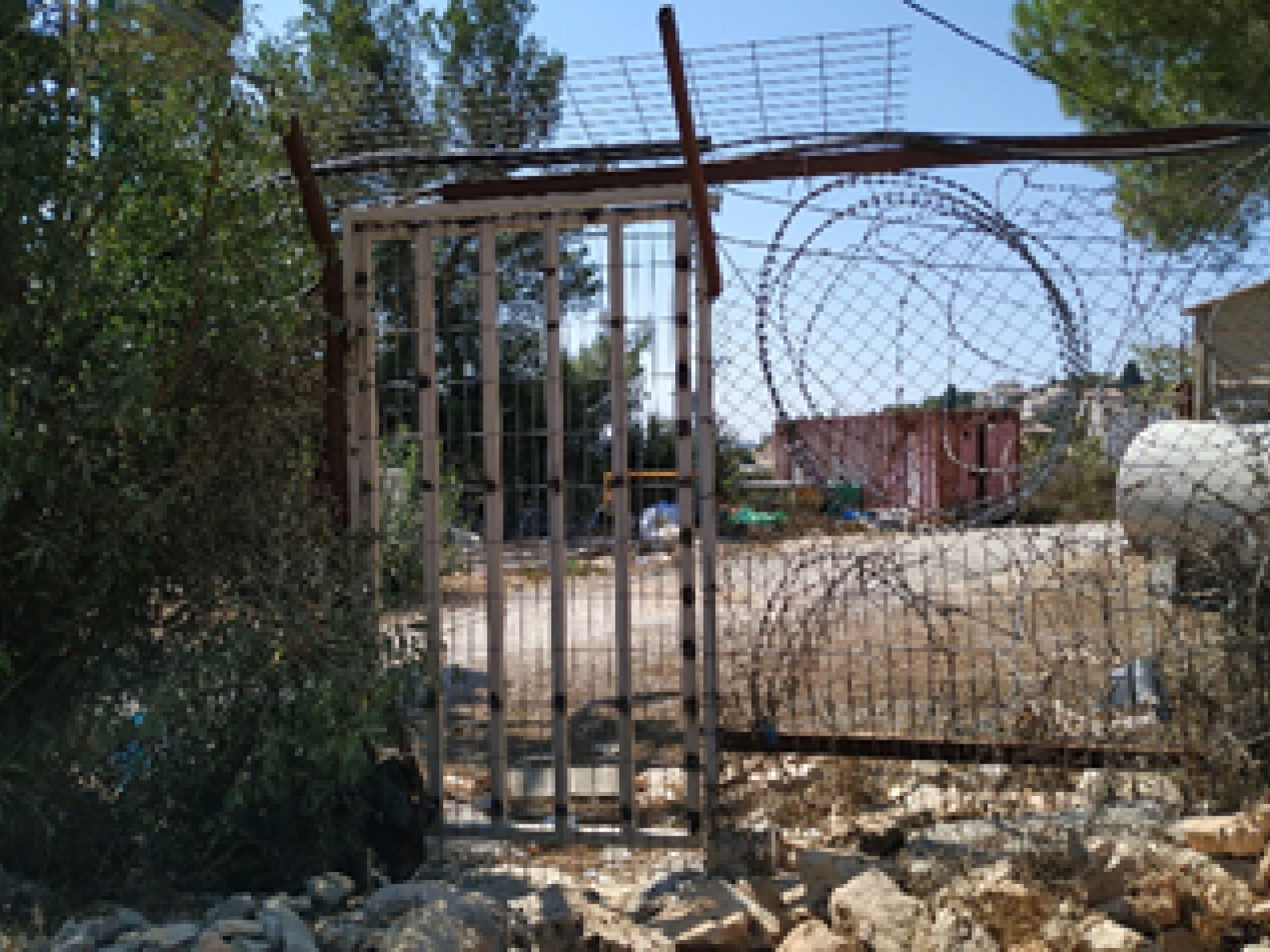 Neve Daniel Jewish settler-colony fence: through the new gate opened in the fence, soldiers enter nightly to harass the Shushhala family. A surveillance camera observes and follows every step of the farmers 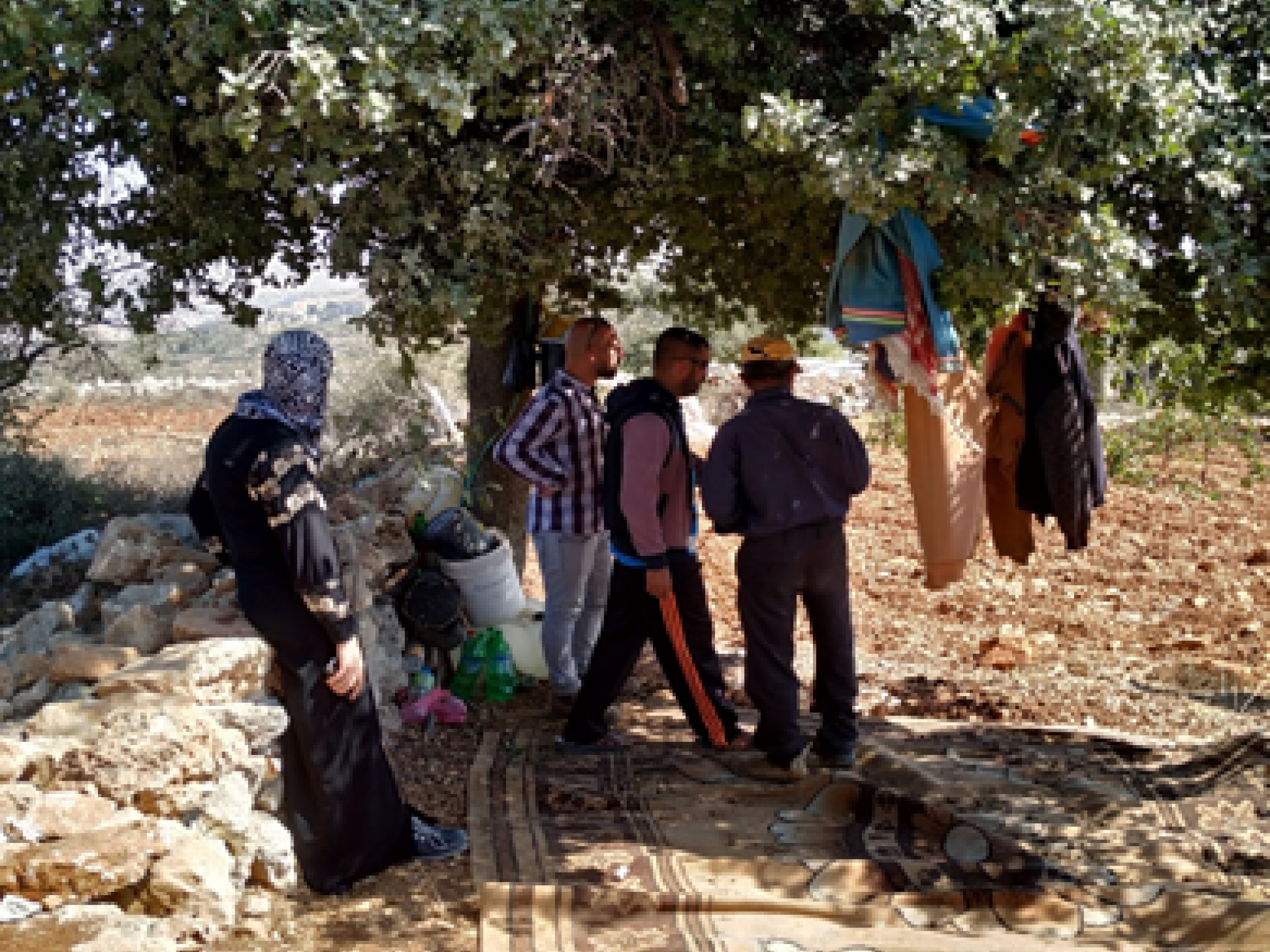 Before he was arrested, the uncle hung up his clothes where his home had been 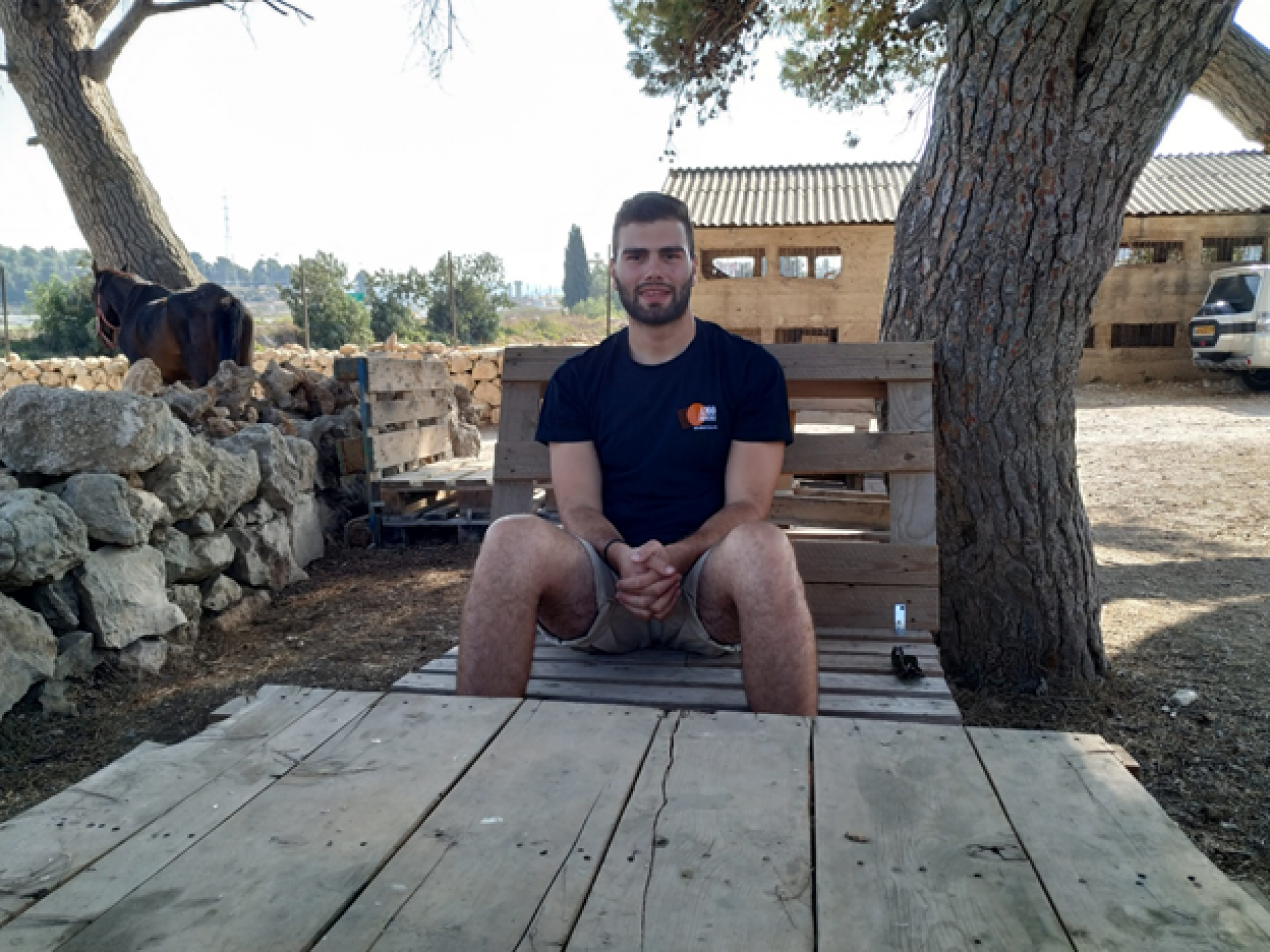 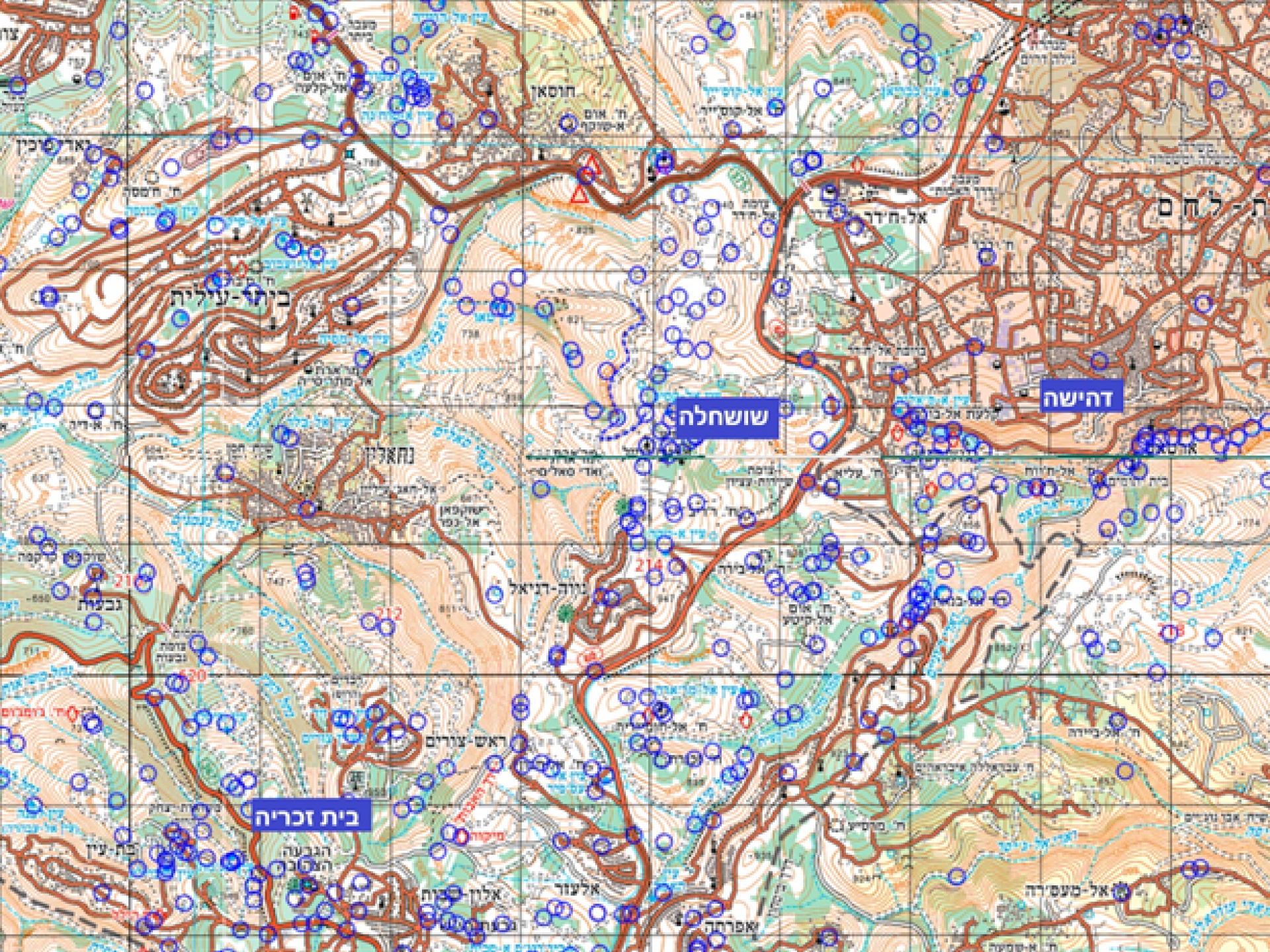 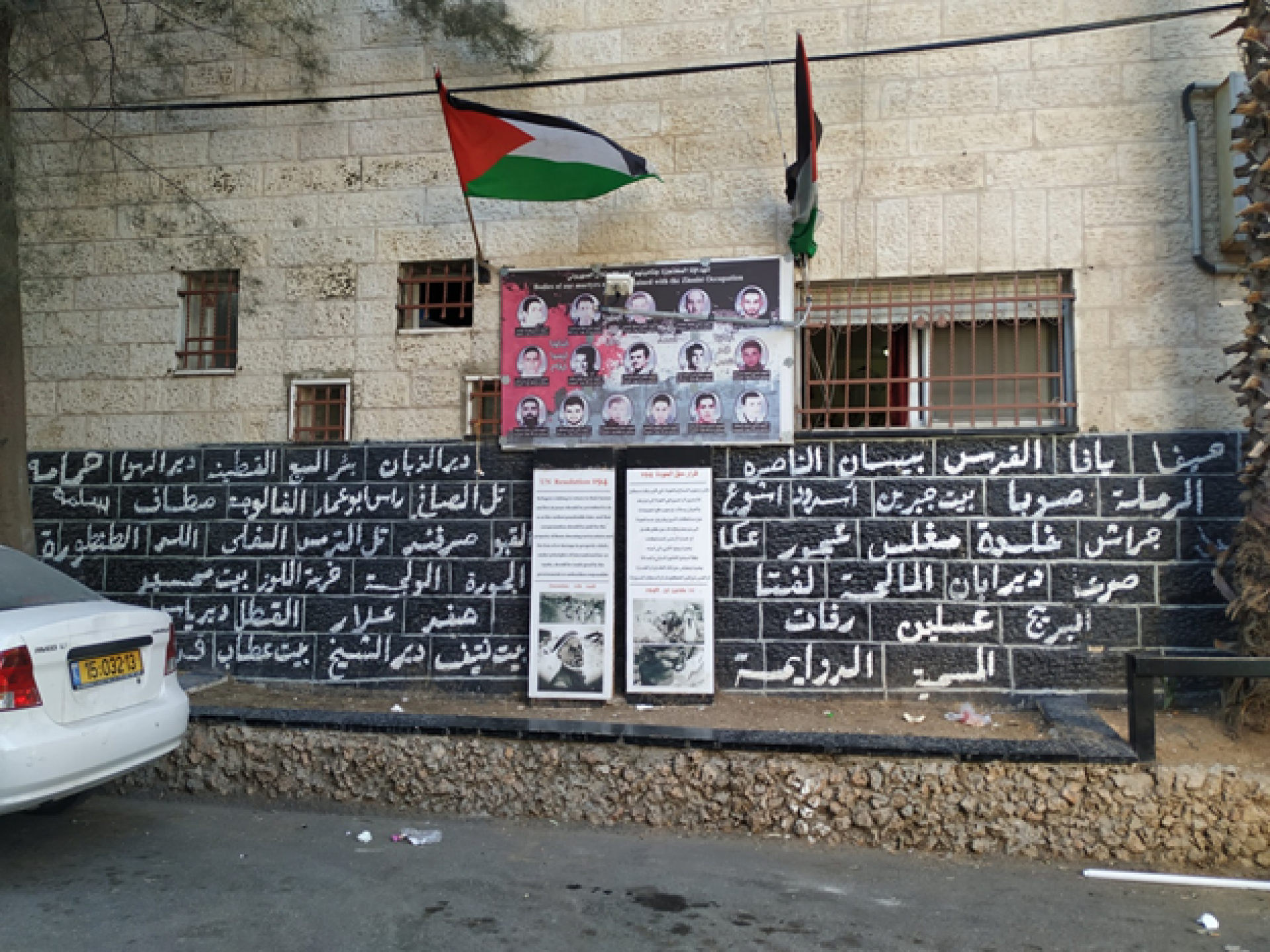 The culture and heritage center at Deheishe refugee camp: the names of all the destroyed villages are written on the wall 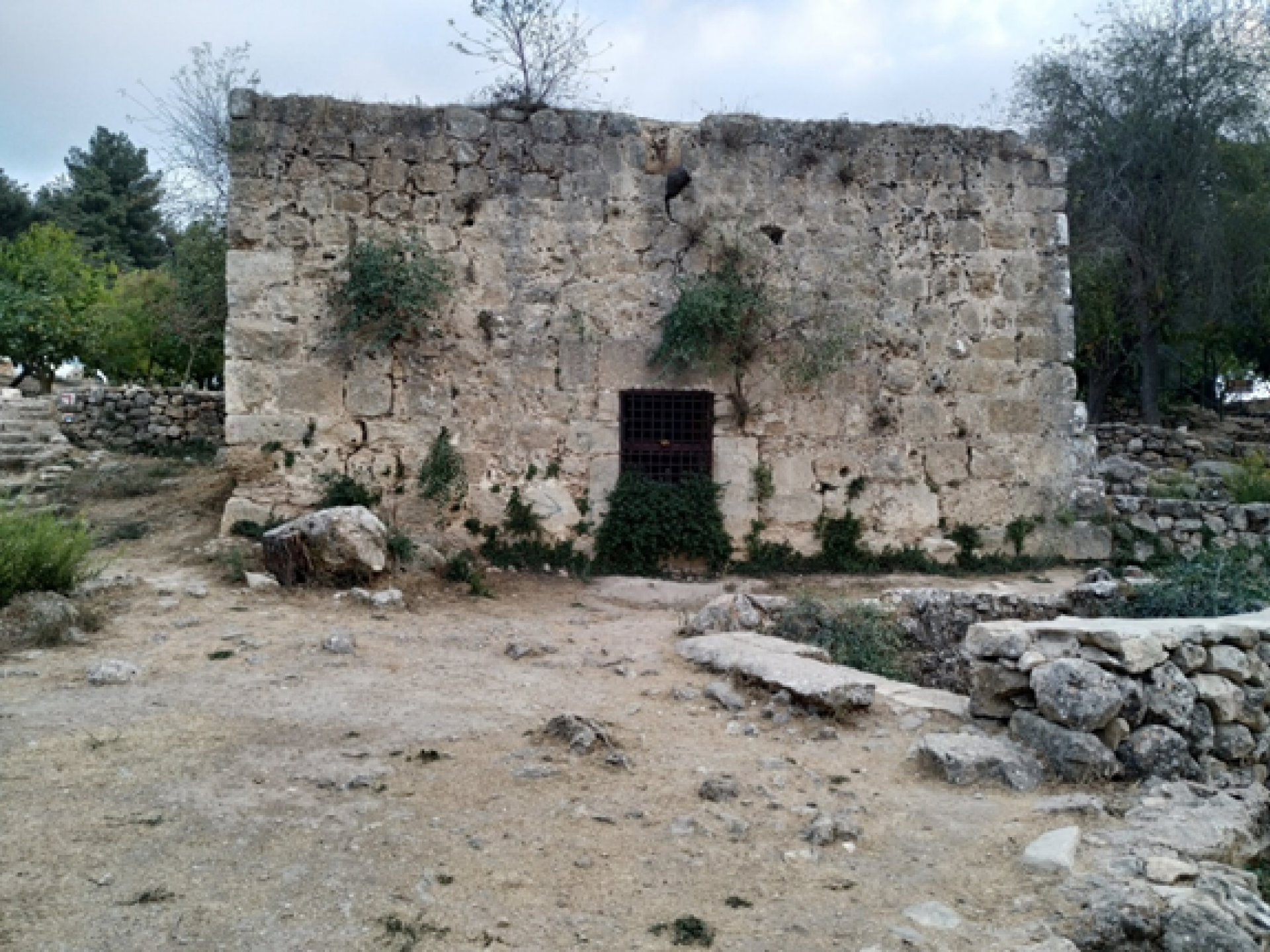 We first heard the name of the village Shushhala only after having climbed the hill and reached the home of a brave farmer family who has lived here for generations. Its land and home were surrounded by the Jewish settler-colony Neve Daniel and 16 years ago by its outpost Sdeh Boaz. In the heart of Shushhala, on the Roman track between Jerusalem and Hebron (City of the Jewish Forefathers), in the shade of ancient oak trees (altitude 1050 meters) stood maqam Nabi Danil, thanks to which we learned about this place. In former reports we wrote that it was made to disappear by unnamed hands 15 years ago, and its place has been taken instead by a commemoration site for a son of Neve Daniel who died during his morning run, close by.

We have met the father of the Palestinian farmer family in the past, and asked him then about their relations with the Jewish settler-colonists. He answered that there was no problem. We raised our eyebrow in wonder. This time the true story was revealed in all its horror and violence. A gate has been cut in the settler-colony’s fence and through it, soldiers enter nightly and harass the family. A projector, on all night, has been placed above the gate and next to it a large camera

with two lenses that revolves and follows every single movement. The family vineyard has been bulldozed on the way to demolishing the house in which the family father was born. Reason: No Palestinian residences may exist inside farming lands within Area C (totally controlled by Israel).

We do not know at present what the area of Shushhala village was before it was parsed, just as we do not know now how large Bet Zakkariya village used to be – these are two Palestinian villages surrounded by Jewish settler-colonies of the Etzyhon Bloc, where the farmers used to live in peace and contentment, their residences surrounded by fruit tree groves, vineyards and crop-bearing fields. This fact has been cruelly eliminated by the paving of roads and land-confiscations in order to build Jewish settler-colonies and outposts. Shushhala is fundamentally tied to its mother-village of Al Khader where the children go to school. We spent about four hours there and at the request of the family we shall attempt to organize a group of guests to show our presence.

The Regavim association has published an item claiming that Shushhala village is fake news disseminated by the European Union:

The isolation of the Saras family’s organic farm - the only Christian family in Bet Zakkariya – from its mother-village shows how the system operates. The village has been parsed into five separate residential areas, among which Israel paved the Etzyon Bloc’s roads, the Etzyon Bloc Junction, the settler-colony of Alon Shevut, and the “Lone Tree” compound, symbol of the Etzyon Bloc. Around the tree a mini-amphitheater is being constructed, for teaching the visiting public about the battle heritage of the Etzyon Bloc in 1948.

The farm is beautifully run on private lands belonging to the Saras family and in the family’s historical houses. They have opened a restaurant serving food prepared of their organic crops, and a wine bar serving wines from their own vineyards. The food is excellent and highly recommended to anyone happening to pass at Etzyon Bloc, Jews and Arabs alike. The entire bloc is officially inside Area C so the farm is denied its elementary right to place a sign directing drivers on the road, as well as receiving electrical power. The Etzyon Bloc’s shopping center is located right opposite including a large branch of Rami Levy supermarkets.

The sole guests at the restaurant were our group and an Italian television crew filming a story about the chances of this brave enterprise to succeed, as it nurtures traditional and organic Palestinian farming methods. Except for the family members, we were the crew’s random interviewees. The Jewish settler-colonists stay away, and the Palestinians fear coming.

In the little time we had we went out to two places, so close both geographically and historically: Deheishe refugee camp where 20,000 refugees of 1948 and their descendants live inside a tiny area; and the destroyed Palestinian village of Al Kubu whose refugees moved to Deheishe, and over whose ruins the Jewish National Fund (KKL) planted Begin Park.