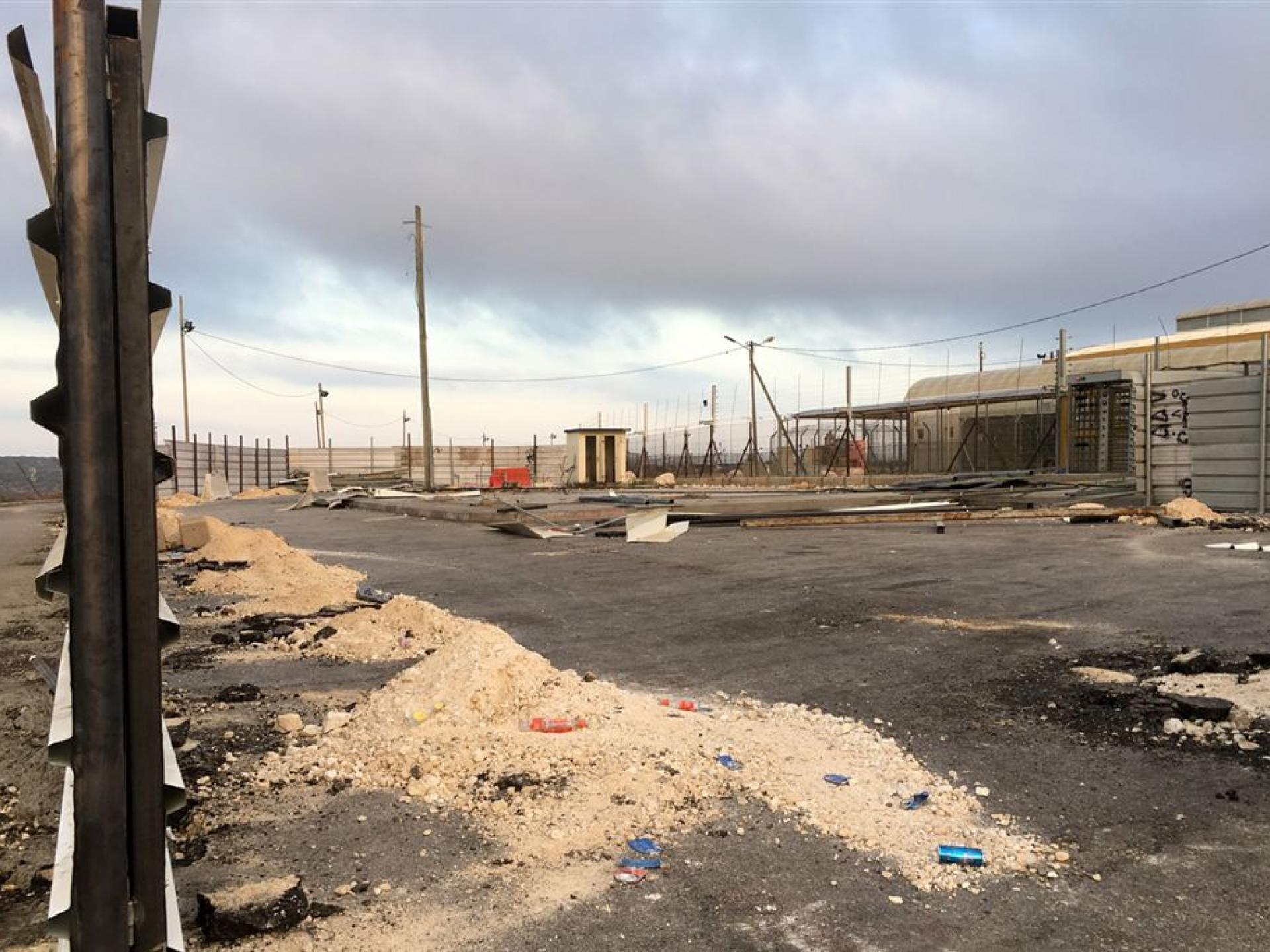 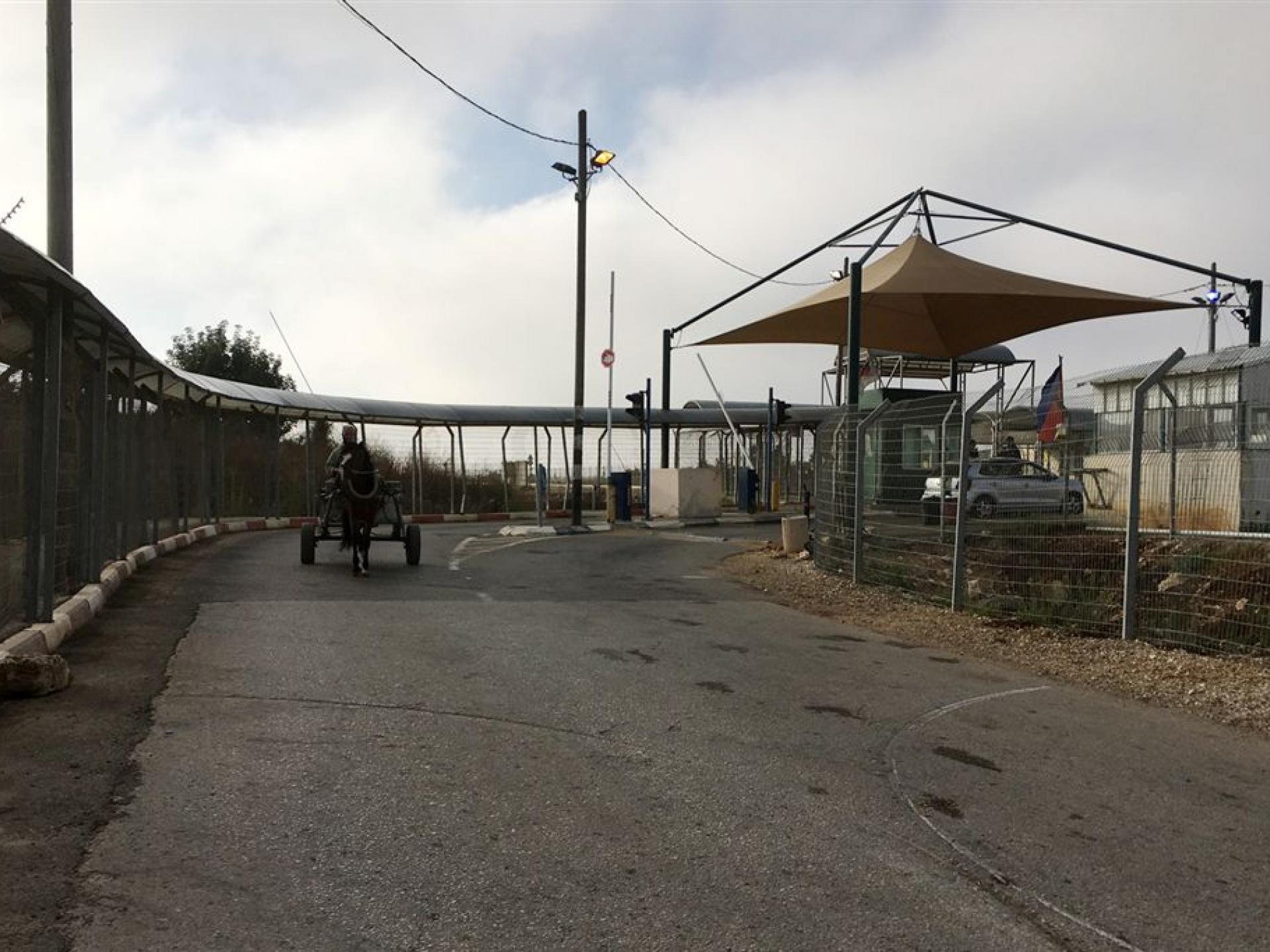 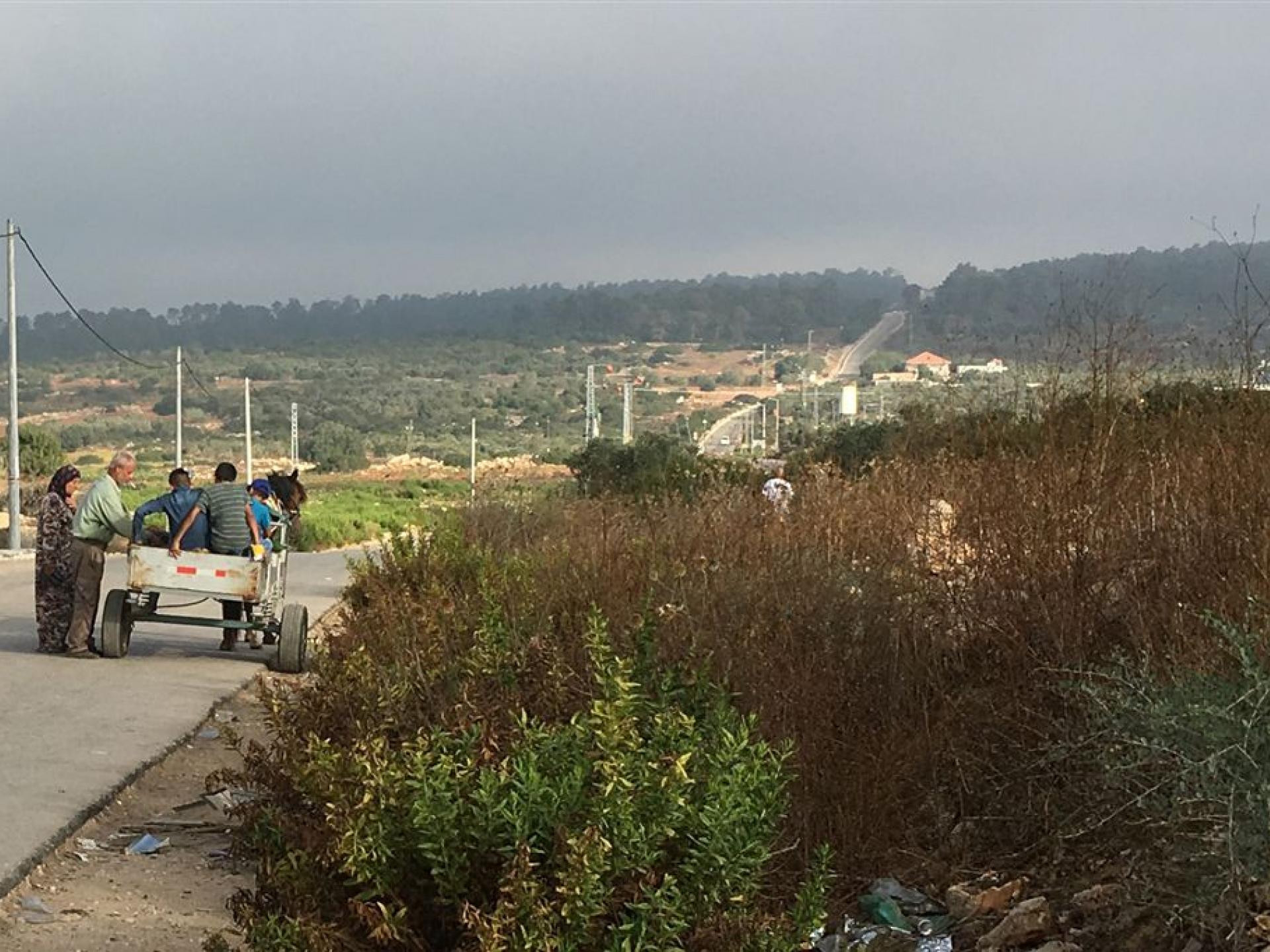 On the way from Tura checkpoint to Dhar al Malekh
Photographer:
Ruti Tuval

Many workers are waiting for transportation on the roadside and in the parking lot, on the seamline zone side. On the Palestinian side there are still vacant parking spots. The checkpoint's horizontal bar, at the entrance to the parking lot, which is operated by the Palestinian security company, rises and falls now and then. In front of the turnstile there is a very short queue. As previously reported, the shed, which mostly served the drivers, has been removed. A large area, including the turnstile that served those returning to the West Bank and the women on their way to work in Barta’a, has been fenced and readied for development,. The single turnstile stops without warning for a solitary worker returning to the West Bank, and we noticed another worker whose forehead has been injured in a similar situation.  Meanwhile, there is no shade in the whole area, and the drivers' attempt to improvise cover was prevented by the authorities here. The drivers beg for a little shade.  We promised to try to help.

At about 06:30 a queue formed, but the flow of people entering was unhindered.

This is Marina’s second watch and, in order to familiarize her with ‘our’ district, we travelled through the Dotan Valey, and also to Y’abed checkpoint, although it has not been manned for a long time. The passage is staggered and drivers have to look out for oncoming traffic, but in general the traffic moves freely.

Here it is calm. People tell us, “today everything is good.” Two military policewomen take a polite interest in us. Although they have been serving in this region some months, they still had not made acquaintance with MachsomWatch.  Everyone arriving is immediately picked up by a waiting driver.

07:30 – two people were waiting at the turnstile. At 07:45 we entered the quiet village of Dhar al Malekh, and did not meet anyone who could tell us if the electrical connection has arrived as promised. 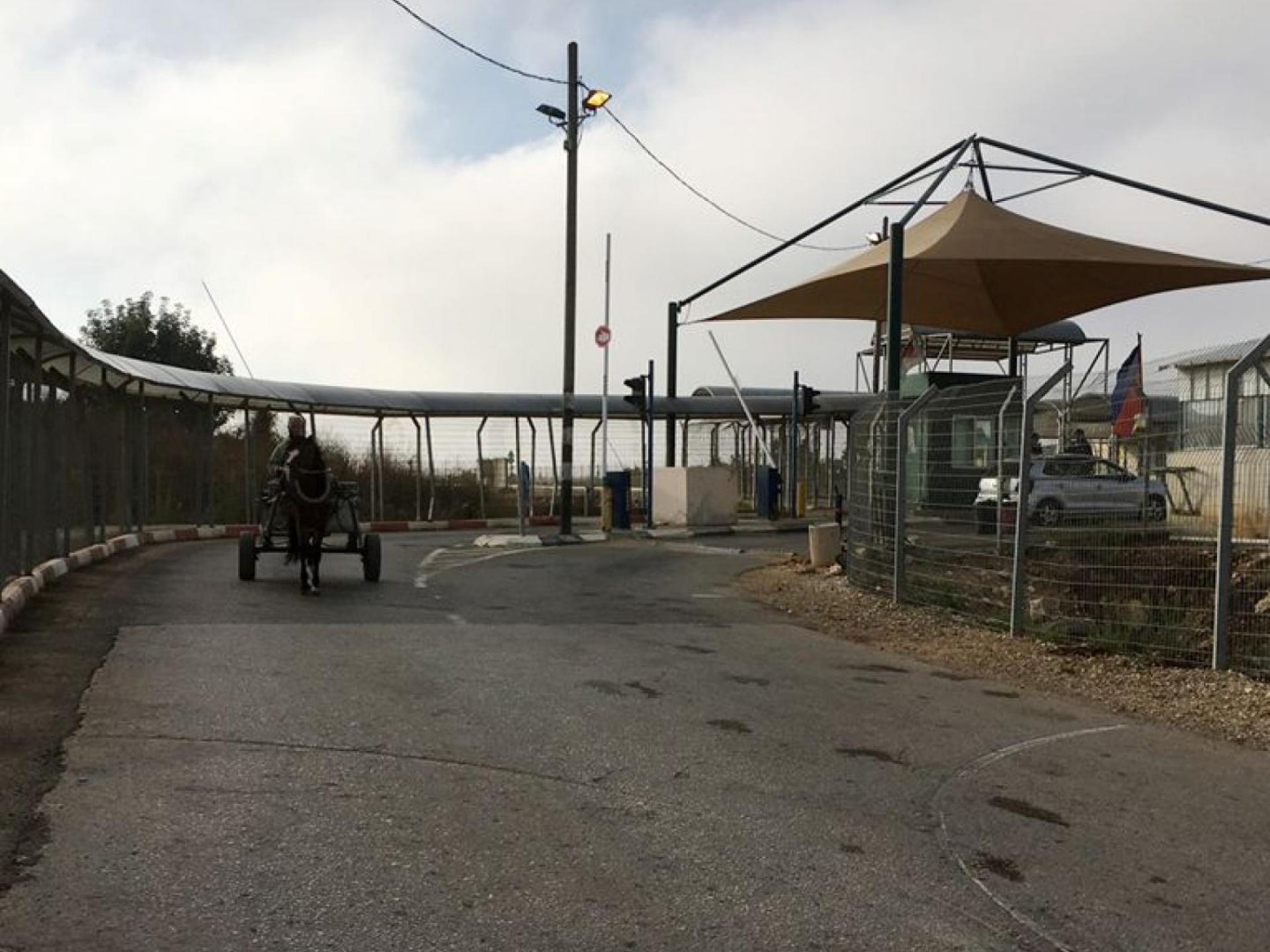 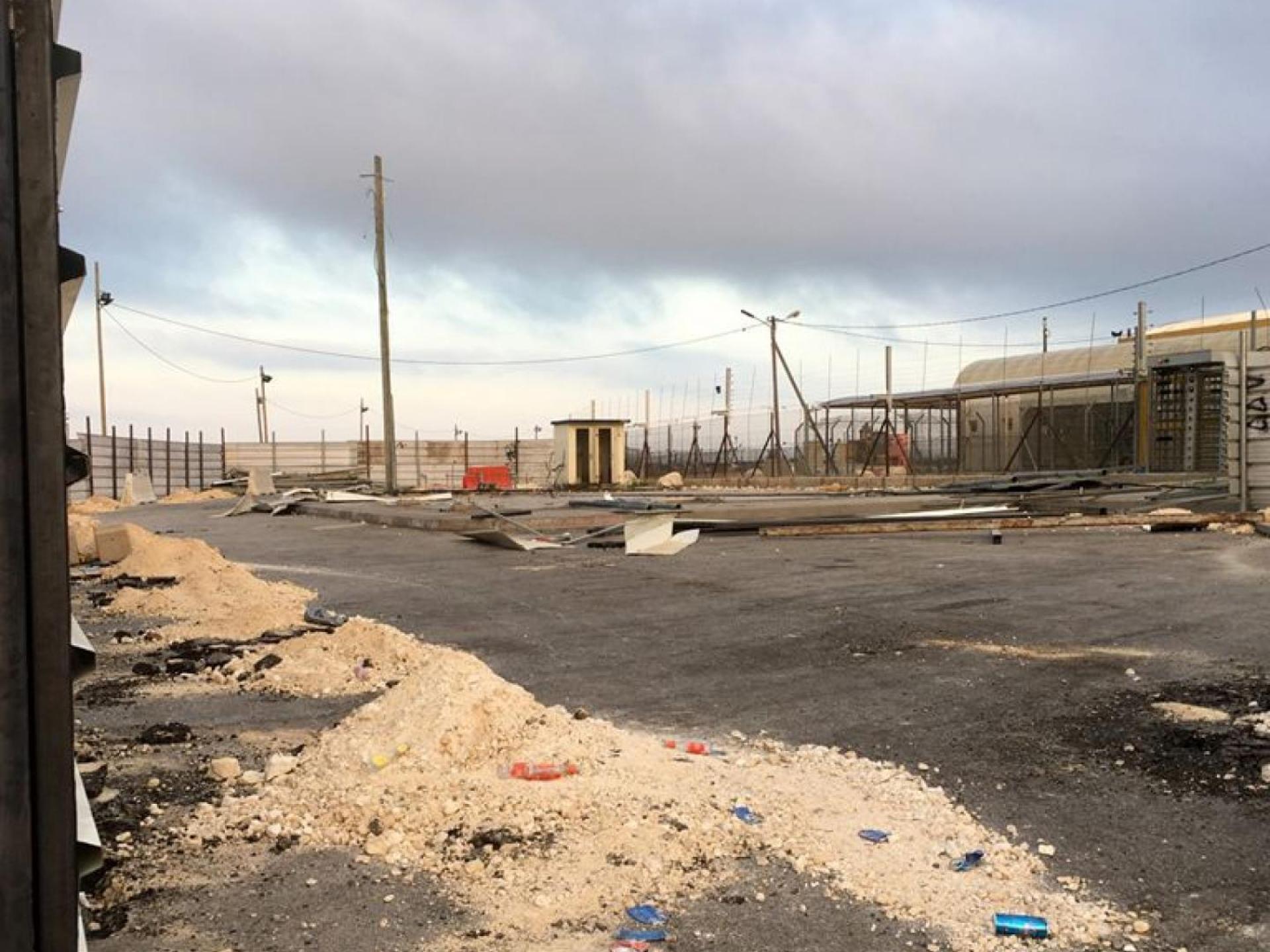 Improvements to Barta’a checkpoint for the benefit of those passing and for the preservation of the Occupation.
Photographer:
Ruthi Tuval