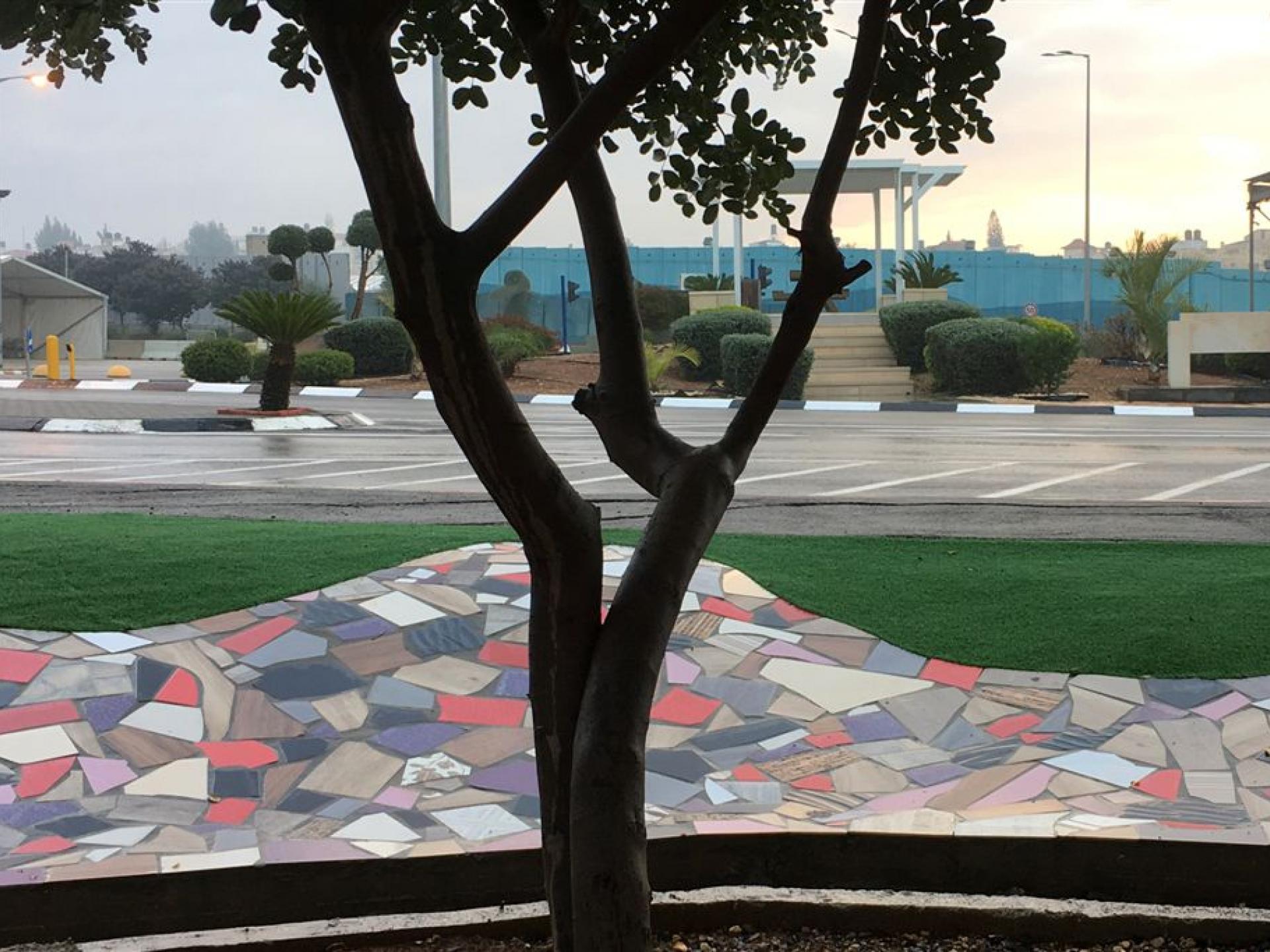 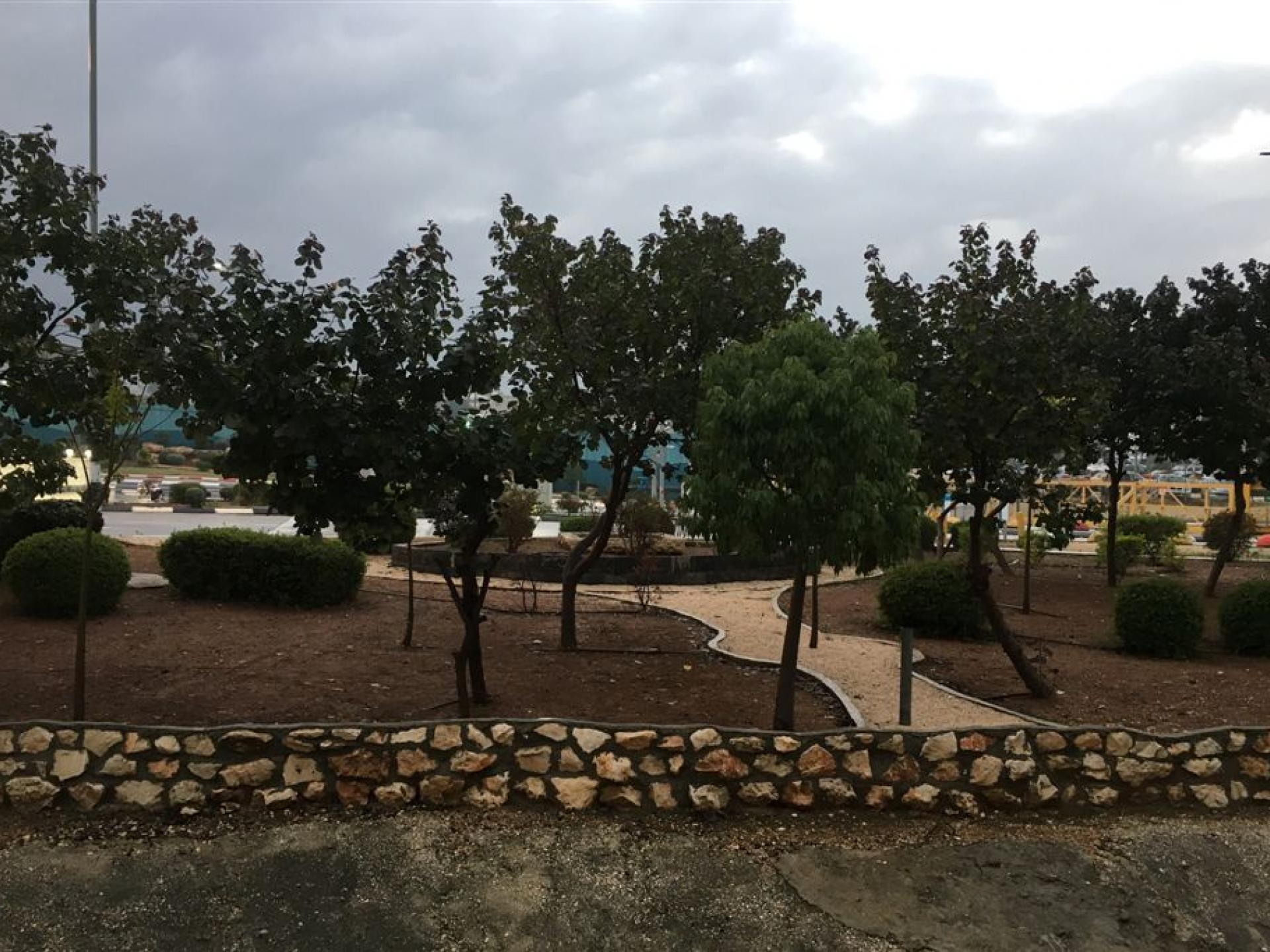 The well-cared for park at Jalame Checkpoint
Photographer:
Ruti Tuval

This is Marina's first visit to this checkpoint, and she was amazed by the size, the scenery, and the contradiction.

We crossed two dirty asphalt parking lots. The first was filled with buses, minibuses, small trucks, and taxis, and the second was barred with an electronic gate. This parking lot serves as a pedestrians crossing, and where vehicles belonging to the checkpoint workers cross to their immaculately clean parking lot.

We walked through the sleeve

towards the terminal.  The parking lot for terminal workers was to the right and to the left was the elaborate checkpoint where cars belonging to Israeli Arabs cross to Jenin.

At the entrance to the terminal, we saw a squeaky turnstile at the end of the path where people leave for work in Israel.  Next to the turnstile is a gate that opens occasionally for people returning to the West Bank.  We volunteered to hold it open for many people coming through until a security guard demanded that we close it.

At 08:00 the vehicle checkpoint opened and a line of cars drove through to Jenin. One woman driver was stopped for questioning.  When we asked why we were told by the security guards “just because…”. They then told us that soon the dirty parking lots after the rush hour was over. They told us proudly that they are responsible for the upkeep of the checkpoint and landscaping, under the direction of Shimon Levi.  They even received a five-star rating from “Beautiful Israel.”

Several workers were already in the filthy parking lot, working to clean it up.  A resident of the village of Jalameh told us that Shimon, the checkpoint director, is a “great guy.” The worker receives a minimum wage from Nissim Jan, a contractor from Ashdod, who pays him in cash on the tenth day of each month.  He works 8 hours a day at cleaning and maintenance and also has a small business in the village. In short, he is happy. The Gilboa Regional Council removes the garbage.

We spoke to workers waiting in the empty parking lot who told us that many of them, who have work permits to work in Israel, have no permanent jobs, but stand on the main road and hope to get day jobs.

We crossed the parking lot where people walk across, and a man wearing a small yarmulke came up to us, accompanied by a security guard.  This was evidently Shimon Levi, the director. He insisted upon expressing his political opinion that there is and will never be anyone to talk to on the Palestinian side and all that is needed is clean and orderly checkpoints like this one.  He is amazed that we are discouraged by his philosophy.  Afterward, drivers in the parking lot say that he is difficult, impossible to talk to, does not listen, and doesn’t let them in after 12:00 and that there are no restrooms or any shelter in their parking lot. They have also heard that there are plans to open the checkpoint at Salem to make things easier at Jalameh.