Briefly:  Vehicular traffic in both directions between Kochin and Nablus is permitted only with authorization, and subject to changing restrictions that aren’t announced ahead of time and imposed without warning.

The checkpoint – the pedestrian lanes are flooded.  People on foot are forced to walk through waves.  Whoever invested millions in constructing the checkpoint and renovating it – apparently didn’t expect the summer to be followed by winter.  Or they just didn’t care, and that indifference of theirs also is expressed today in the way the checkpoint operates.

14:15  Qalqilya – Cars crowd into the line from the parking lot to the entrance to Qalqilya.  45 vehicles, of all kinds, in line: taxis, trucks and private cars.  The line advances despite the terrible crush.  Apparently something that was blocking the line opened up just as we arrived.

14:35  The “Shvut Ami” house is deserted, as is the “hilltop youth” encampment across the road.

14:40 J it junction is deserted.  A truck belonging to the public works department is parked to the east (on the road to Za’tara), lights flashing.

14:50   The new checkpoint next to Deir Sharaf is empty, but threatening, with its concrete blocks and yellow gates

on both sides.  It still isn’t clear when it will open, and what its purpose is…

14:55  On the road to Kochin we met taxi drivers who were parked waiting for passengers.  We asked whether cars from Kochin are permitted to enter or leave Nablus.  Here’s the answer:

Cars coming from Kochin are permitted to enter Nablus without being stopped or inspected.  But special permission is needed to leave.  Only two taxis from Kochin have such permission, and only for ten more days.  Afterwards – nobody knows what will happen.

No one was even notified about the current “arrangement.”  Only after people entered Nablus and wanted to leave were they suddenly asked for a special exit permit, which, of course, they didn’t have.  Most of the time the soldiers tell us, with respect to such cases, “they know”…(after they’ve been punished, of course).

15 cars go through to Nablus without being checked.  Only a few cars on the other side  are leaving Nablus.  It’s pouring, and the puddles are deep.  Streams of water fill every crack in the road and the path.

To enter the area of the checkpoint we had to walk through puddles higher than our shoe tops.  People jumped from one rock to another, and some slipped on them.

When I finally arrived at the checkpoint, my shoes filled with water, I asked the commander to lay down a board so people could use it as a bridge.  He looked at me like a chicken looks at a human.  My request sounded delusional.  “Only this morning senior officers were here and saw everything.  If they think it’s necessary, they’ll do what has to be done.  It’s not my job.”  “Of course,” I said, “but you can ask.”  I got no reply, no response.  A blank stare.

A soldier standing in the booth for people entering Nablus on foot directs them to the lane through which a stream of water flows.  A Palestinian standing in front of this flood looks at me questioningly…I ask the soldier to let the man go through a different lane, one that’s dry.  He looks at me, amazed: “And what about the soldiers standing in the rain?”  I look at his face in disbelief:  He looks like a good kid.  Cute.  Gentle.  Innocent.  I ask myself how that’s possible?  And he – he’s just following orders (summer orders).  He has neither the authority nor the desire to alter procedures.  It seems to me he has no idea where he is, and whom he’s serving.  (When I had just arrived at the checkpoint, and came near him, he pointed me to the lane for Palestinians, where water was streaming.  I smiled at him, and he smiled back.  It took him a while to realize that I wasn’t a Palestinian, but a human being…)

I go over to the commander (1st Sgt. N.).  He – despite the look of dissatisfaction on his face at my intervention – is certainly practical.  He immediately goes over and orders the soldier to direct people to the dry lane. The soldier carries out the new order without showing any discomfort.  What does he care?  He obeys any order.

People go through “on dry land.”  But those who arrive later, after the soldier has been sent to do something else – have no one to direct them to the dry lane.  Once again they stand helplessly before the flow of water.  Once again I call the commander’s attention to what’s happening.  He deals with it, does what he’s supposed to.  But for some reason he’s hostile to us.  Since he isn’t always standing there, I find myself, unwillingly, waving people over to the other lane.  We look for help from the DCO representative.  It turns out that A’auni, from the DCO, had already gone off duty, but he came over to help.

The shed is almost empty, but the inspection is rigorous:  people remove their belt, lift up their shirt while turning around (the well-known “dance”), sometimes remove shoes.  Every parcel is opened, its contents spread on the ground.  It isn’t clear why there’s no table on which parcels can be inspected – maybe because of the rain?

15:40  This is the third bus that’s come through since we arrived, but unlike the others, whose documents were checked while on the bus, all the men have to get off to be checked outside in the rain.  The bus stands next to a puddle, and whoever gets off goes right into the puddle.  The young men jump from the bus to the fence railing, and from there – over the puddle – to “shore.”  But those who are older?  -  Right into the water…

None of the officers or soldiers seem interested in doing anything about it.  What’s the big deal?  So they get a little wet, so what? 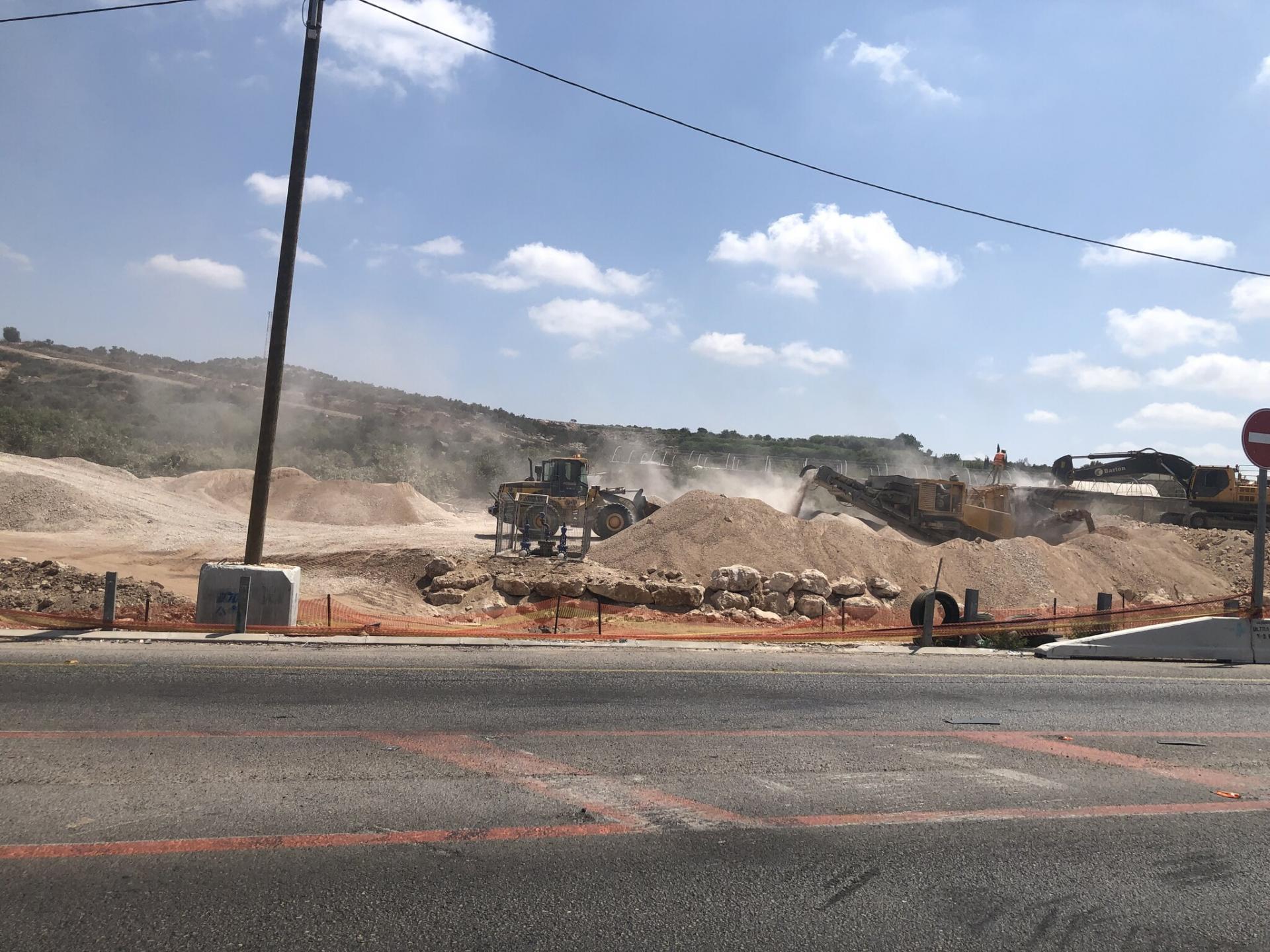