Fun and games: it's hard to conceive of an Occupation as light
amusement, but certainly to the Occupiers, that's the way it seemed
today: a pleasant, enjoyable, and light-hearted activity or amusement.
For the Palestinians, however, today was just another day in the daily
grind of restrictions, rules and regimentation.

There's no traffic from Qalqiliya, but to Qalqiliya, the line grows.
Why? All of a sudden, the soldiers at the checkpoint are running
around and one collapses to the ground with a lot of fuss. (He seems
to be dressed for a role as on his head he wears a green bandana) The
game we witness goes on as everybody wanting to cross the checkpoint
waits and waits. Fun and games! Why? "Every time there's a change of
shift, there's a drill." When we point out that during this time,
people are delayed, we're told, "The drill takes the time it takes"
(the kind of logic that obviously goes with a framework of fun and games.)

13:30 -- from Qalqiliya, there's now a long line, and no work at all
is taking place at the checkpoint. One soldier is made to stand at the
head of the line of vehicles waiting to be checked, probably being
ordered to keep them in check and keep them away from the fun and
games of the soldiers).

Once the drill is over, there's no checking, just occasional peering
into vehicles. At the far end of the checkpoint, at the exit post from
Qalqiliya, the soldier with the pirate bandanna, who was the "victim"
in the drill a few minutes earlier, soon takes on the aggressor role
and seems to cross examine drivers, particularly those driving cars
with yellow Israeli license plates. At one point, two drivers, both
women, one leaving, the other entering Qalqiliya, both in Israeli
cars, exchange pleasantries as their paths cross.

13:45 -- two cars with Israeli license plates are stopped. The
commander, a sergeant, leaves his post and goes to the second one. We
ask a question of the lone soldier and, when the sergeant returns, are
told that we should talk to nobody but him.

Our friend, who drives the Gauloise truck hoots and waves, and
although he's been checked by the soldier at the exit from Qalqiliya,
the soldier at the other checkpost takes it upon himself to bother the
driver.

On the way to Jit Junction

Several large posters, particularly at the entry to settlements
proclaim "Independence at Homesh" (the settlement that was disengaged
beyond Shavei Shomron: presumably an intended "march" on….)"

At the Shvut Ami outpost, it looks as if one window has blinds!

The generator, one of two, hums loudly (for what)? in the otherwise
still summery air. No line of vehicles either to or from Tulkarm. Cars
with Israeli license plates pass freely, the soldiers make jokes with
the drivers. One raises a fist, not a finger, to beckon cars forward,
his back to the cars, his conversation with his fellow soldiery hardly
interrupted. (Maybe he's also telling a Wizard of Oz story, as at
Qalqiliya)!

Taped on to the locked gate, a sheet of pink paper. On it, printed in
Hebrew lettering, "Thanks to Watch for what you do on behalf of us
all, wishing you health." Below, in smaller letters "Activists against
terror." As we're waiting for the gate to be unlocked, the white jeep
of the DCL drives up. One of the two soldiers descends, goes up to the
gate and pulls the offending poster off while asking, "Did you put
that up?" We express our indignation as the soldier bearing the key
saunters over from checkpoint central. They ask him if he knows
anything about it. "Yeah, the women in Blue and White" he answers
nonchalantly as the DCO representative tears the poster into small
pieces. Fun and games!

For a change clear, nobody held, nobody waiting, no traffic.

A huge blue and white flag flutters by the crow's nest. A long line of
vehicles, at least 15 of them, waits for checking on the hill leading
up to the checkpost where three soldiers are stationed, one, as usual,
in the crow's nest.

16:55 -- the DCO jeep arrives and stays for 15 minutes. A young man
goes up to the two soldiers, smiles and shakes hands with them.
Evidently, the commander on duty here has called the DCO since on the
young man a mobile phone was found to bear photos, one of which showed
somebody with a gun! The young man, who seems quite cheerful, while
being told that he will not be allowed to pass unless the photos are
erased, is soon on his way. More fun and games?

17:20 -- thorough checking of every vehicle: inside, trunk and IDs
(although the IDs are not checked against any piece of paper or on a
computer). By the time we leave, only six vehicles in line. 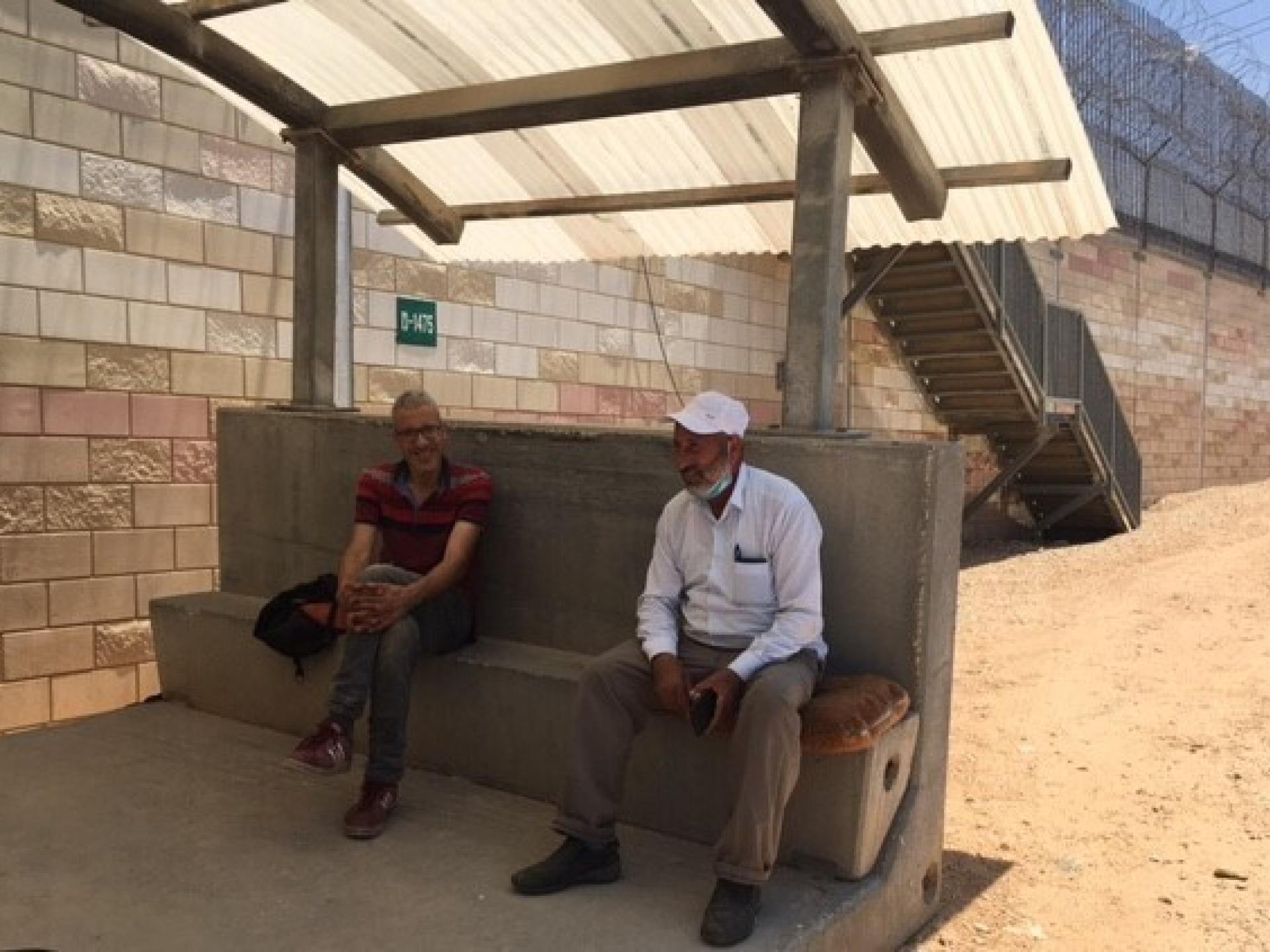