Once again we note that the Qalandiya checkpoint is not built or equipped to handle the number of people who pass through it on a standard weekday morning on their day to work, school, hospitals, etc. Therefore traversing it, whether on foot or by vehicle, becomes a daily punishment.

When we arrived at the Qalandiya checkpoint at 5:30 a.m., all five checking stations were open and the three lines leading into the “cages” already extended deep into the parking lot – 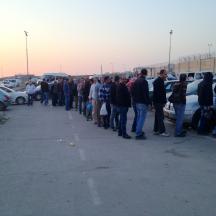 and so they remained until about 7:30. At 6:30 we began to following a man at the end of one of the lines and learned that it took him 50 minutes to reach a checking station.

During the shift we spoke with a number of people on line, all of whom reported that – in contrast to the previous week – the long lines and slow pace was much the same on the previous two days of this week. To those who asked us to help improve the situation, we warmly recommended that they too take steps by asking their employers to complain about the situation at Qalandia to the Defense Ministry. We understand that other employers had already begun to do so, and the message was hopefully seeping into the consciousness of the army and the Israeli public. (Incidentally, American friends told us that an article to this effect has recently appeared in Time Magazine.)

The Humanitarian Gate was opened by a security guard at 6:15 (the DCO soldier in charge of the gate turned up ten minutes later). It operated normally until 7:30, when the DCO soldier decided it was no longer needed and declared it closed. Before leaving, however, she gave the key to the same security guard who had originally opened it.

Though the lines through the “cages” began to shorten after 7:30, at one point we asked the security guard to allow a woman with three small children 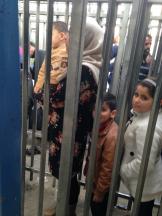 – one she was carrying, the second holding her free hand, and a third who looked to be about eight or nine years old – to enter through the Humanitarian Gate so that the children would not be caught inside one of the narrow cages – a truly unpleasant experience. At first he said that it was forbidden for him to talk to us at all. When we persisted, he agreed to let this family through. But as they began to make their way toward the gate, a few other people (another woman and few elderly men, who at any rate are eligible to use the Humanitarian Gate) also began walking toward it. Seeing this movement, the security guard made quite a scene, shouting that he would allow only the mother and three children through the gate and would not open it until all the others (some six people) returned to the lines through the “cages.”

“See what you’ve done!” he shouted at us, as if we had caused a war crime on his watch. We considered quietly suggesting that he take a breath and a step back to gain some perspective on the situation: all in all, a mother with three young children and a few elderly people wanted to go through the Humanitarian Gate, which they could have done anyway had they arrived a few minutes earlier. But as he continued to shout, we understood that we were facing a young man with a rifle whose self-esteem is apparently bound up with flaunting his power over the weak, and there was no point in trying to institute a dialogue.